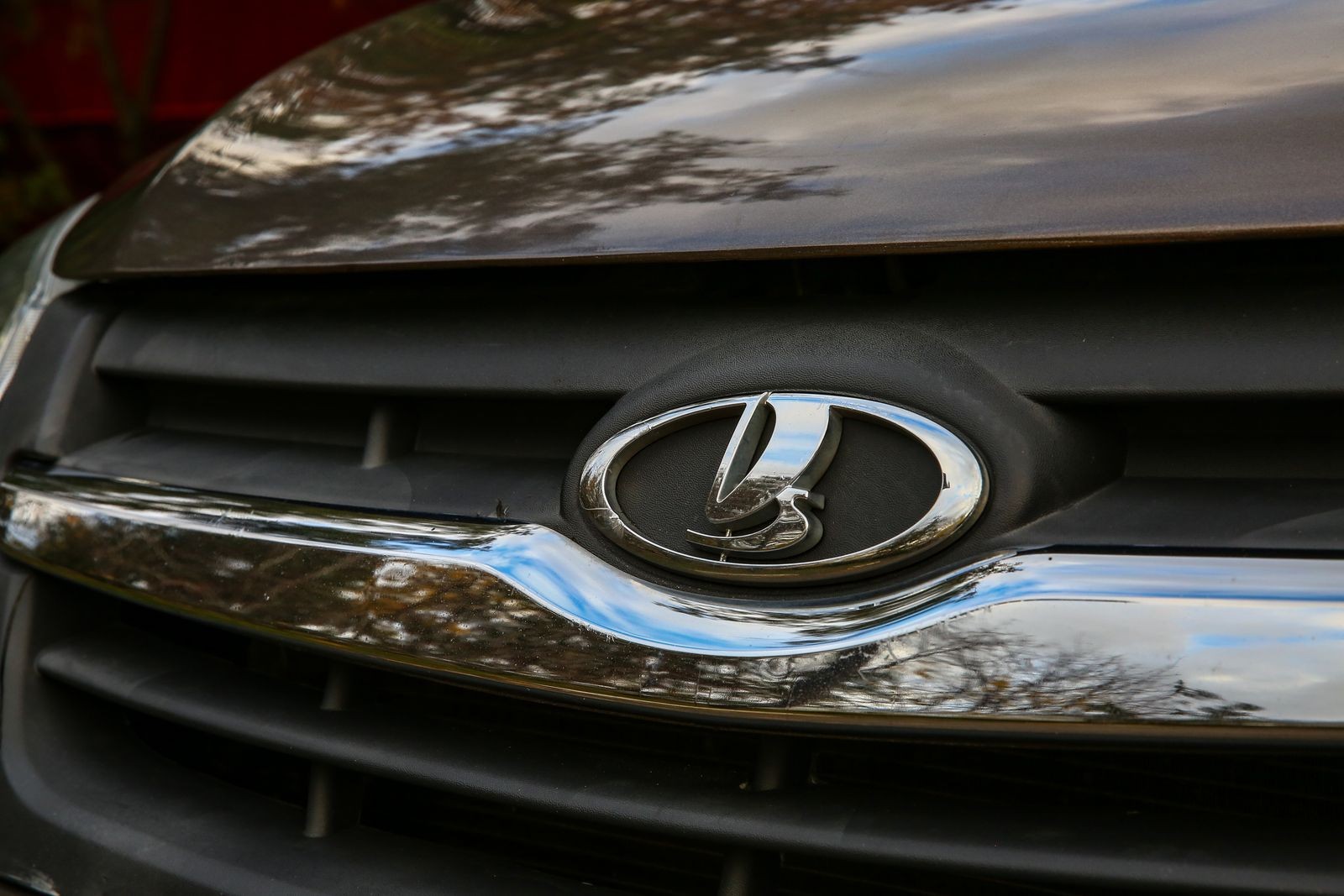 Lada Granta is the last incarnation of the chassis VAZ-2108. It preserved the basic solutions of the body and suspension… and the set of units is exactly the same as was conceived for the first serial vazov front-wheel-drive vehicle. The Granta is considered a development of the Kalina project, but it is more like “development in reverse”.

The modernization is primarily aimed at creating the most practical and budget version of the car based on the same body and units. Externally, the newer model even at the time of release looked no worse than the “ancestor” due to the efforts of designers, but a direct comparison easily puts everything in its place. Each element of the car has been optimized according to the principle “but is it so expensive, let’s make it simpler! Already here is good old hydraulic headlights adjuster, simple armchairs, oak planking of doors, superfluous button of trunk opening, steering wheel from the cheapest plastic, lockers are not provided, and a heap of “trifles” which are not visible on the photo. But the price of “standard” variant was only 30 thousand rubles higher than the price of 2107 which was retired in the same 2011.

Since the requirements for comfort and safety have grown in the 21st century, the Granta has airbags, automatic transmission and air conditioning. But not in all configurations, since the most budget version is equipped with only one airbag, the driver’s one. Well, from below it is the same as 35 years ago.

Front suspension with an extension arm and “crab”, behind the same beam and still without a subframe. Steering is still a simple rack (CPS is rather an add-on for a steering column), and in the engine compartment the engine is very similar to 2108, except without a carburetor.

The scheme of electronics from the very first Kalina does not differ much from the tens. Is that in 2013 appeared CCBE, many times cursed at first, he same comfort block on the German models or BSI, if we are talking about the French car. He is also a smart hub of power and control of auxiliary systems. However, everything in order…

May 16, 2011. Beginning of production. Base engine 11186 1.6 liter 87 hp for “Norma” and “Lux” kitting, for “Standard” there is an old version of the engine 11183-50 with 82 hp, which is primarily distinguished by Russian-made piston group and simpler timing mechanism without automatic tensioner and lack of airtight casing. Announced Sport version with 120 hp engine, manual transmission with sport line and reconfigured suspension.

August 2018. Restyling of the model and unification with the Kalina lineup. Appearance of new “hatchback” and “station wagon” bodies in the lineup, complete renewal of equipment, appearance and dashboard on the model of the Kalina. Rear fenders appeared, and such options as cruise control and rain sensor became available in the top versions.

Finding an old Granta without corrosion is not that easy. Small bugs on cars produced before 2017-2018 can appear everywhere. But to find a variant with serious corrosion, on the contrary, you can easily and effortlessly. The car does not rot like the classic Zhiguli, but it has enough weak spots, and the paintwork is thin.

The one-sided galvanizing of almost all body panels allows preserving the body as a whole, but the offensive design miscalculations negate the efforts of metallurgists. Why in all pre-18 model years the “noise insulation” plate, under which the door is rusting intensively, is glued to the bare metal inside the door, is absolutely unclear. If you do not remove it before 3 years, you can expect “bugs” on the outside of the door, and they will immediately through.

Why the edge of the front fender is made with a shelf, given that there is no locker inside the arch and all the dirt accumulates in the bend, it is also unclear. Of course, the fender will rot through the edge very quickly.

At the rear, the edge is also not protected by anything, and there is no locker, but the edge is implemented differently, and it rots less. The hood rusts because of poor welding and thin metal, the frame comes away from the outer panel, and there is enough moisture, so the front edge rots from the inside.

Corrosion in the door handles is predictable, the design scratches the edge of the paint in the hole, and the effort here is not insignificant, especially on the rear doors, “thanks” to the unfortunate design of the lock. The doors are also corroding on the bottom edge, because the inside is wet. The upper glass seal is made cheap and unreliable.

Chipping and rusting of the roof panel above the windshield is also almost mandatory, the metal here is not galvanized, and chips occur regularly. The trunk lid also suffers, rusting along the bottom edge and at the contact points with the seal where the paint rubs off. Add to this the generally weak paintwork, not very uniform and quite thin in the openings, without any attempt to strengthen it with armor film, even on the sills, where sandblasting is rampant.

It turns out that chances for a happy life with the car are not very great, unless the first owner took care of all-round improvement and poured a lot of good anticor in internal cavities, replaced noise isolation with removal of old moisture collectors in the doors, Didn’t glued all points where plastic rubbed against metal, didn’t take care about mastic under cabin carpets and on the bottom of a body, didn’t put additional gaskets on doors, to dirt didn’t gather there by kilograms…

The designers obviously expected to use the car for 5-6 years, and after that they expected to boil, patch and anticorrect. The body copes well with corrosion in more southern and dry regions other than St. Petersburg and Moscow that account for most of the sales.

In copies of 5+ years old, it makes sense to seriously check the body from below, not just the edges of the arches. As well as in many VAZ, the underbody is well covered with a “coat” of mastic, but in Granta the layer of coating is thinner, and OEM lockers, as has already been said, are out of the question.

The main focus is on the arches, sandblasting areas and dirt collection points. Mostly, again, in the wheel arches, in the gaps between the fender and the front panel, and at the spring mounting points in the rear. Many cars for some reason have surface corrosion along the bottom of the front panel and up to the “crab” mounting points. Also it rusts where the exhaust comes close to the body, especially in the back, under the trunk.

Light surface corrosion of the panels, not protected with mastic is not a crime, it is just typical for the car. But the sagging layer of mastic and perforation of thin elements is the reason to refuse to buy. Well, unless, of course, you expect to “roll up” the car up to delivery in scrap metal in the nearest year.

If you have the slightest doubt of traffic accident, it is worth checking all seams of a body, because metal is thin enough, and sealant is bad – consequences of impact may be the most unpleasant.

In general, it’s not as bad as it was with Zhiguli in the 90’s and early 00’s. Grants rust plus or minus the same as Logans or Polo sedans, maybe a little worse. That is without full-fledged fastidious examination on an elevator you cannot, but chances to find “live” variant are high enough.

Bumpers made of cardboard and without a sensible frame, simple in design headlights, quickly rusting thin exhaust, scratchy windshield, bad seals, disgusting work of rear door handles and a million more complaints are quite reasonable.

If you want it to be like a decent car, then put your heart and hands into it. Glue gaskets, they come in extra kits. Cut a piece of camera from the truck, cover the windshield wiper mechanism, and after 100 thousand replace the hinge. Put LED fog lights, on sale is the original wiring harness and fog lights themselves, which shine better than the regular dipped beam. Finish everything is not only possible, but necessary, if you want to ride well.

Seats, panelling, panels, bumpers… No, it will be like the moon to Solaris, but doors will close without creaking, locks will work easily, light will be good, it will not blow into the legs at speed and noise in the ear. Granta for comparatively small money will become a pleasant car for those who can not afford a new foreign car and are afraid of the old one.

The fact that the interior of the Granta is ascetic, we can not mention. But it usually suits the owners, especially if they have moved to the Granta from the classic Zhiguli or the old “ten”. There is a lot of space, the dashboard is smart and well readable, the climate block is quite functional, the heater blows… Perfectionists and those who have rode at least in Hyundai Accent 2000 will suffer from desperately bad and moreover quickly losing shape seats, low quality of assembling and not only.

It is relatively common to encounter problems with a clogged heater radiator and rod breakdowns. The first is due to infrequent antifreeze changes and driving on dirty water in summer, and the second is simply because they pull the handles, and the mechanism is quite weak.

The quality of VAZ electrics has been glorified many times over the centuries. How to make the copper wires so brittle and the terminals so unreliable, only in Tolyatti know. Yes, in general, the car is good enough to operate, but it is still worth remembering Ohm’s law for the circuit section and know how the current flows, where it comes from and how to check the electrics. It is also desirable to have a simple scanner to read errors, because the engine wiring here too… VAZ.

Disputes about what is better, the generator bracket with tensioner or without, are conducted by owners of Grant for a long time, but the problem is not really in it, and that the generator has bad bearings and the quality is not different. It, of course, bears the proud brand Bosch, but it comes to us from India. The KZATE analog from KATEK has less stable quality of the voltage regulator and assembly, but its bearings and mechanics are better.

About unsuccessful location and low life wiper motor I have already written above, in the part about the body equipment. Starters also do not serve very long, but it is not a problem – the choice of restored and new is good, and on the vazov engine replacement can be done in 15 minutes on the street.

The wires in the driver’s door constantly break, the tips of connectors get oxidized, the connectors themselves are made of weak plastic, they quickly deform, and the plastic becomes brittle. The quality of assembly also affects – new machines can have broken pawls of connectors, not fully inserted or not properly crimped tips in connectors.

Relays are inexpensive, but their life is also limited, no more than 5-7 years, so it makes sense to keep a few in reserve. Ignition modules and sensors after 5-7 years should start to change proactively, so as not to spend money at services for “as if diagnostics”.

Wiring in lux cars, and all cars with automatic transmission and automatic transmission from 2013 year may have already mentioned above two times block CBKE. It is easy enough to understand whether it is worth it: if the relay clicks when the turn signals are turned on, the wiring diagram is simple, and if the speaker clicks, it is the CSCE.