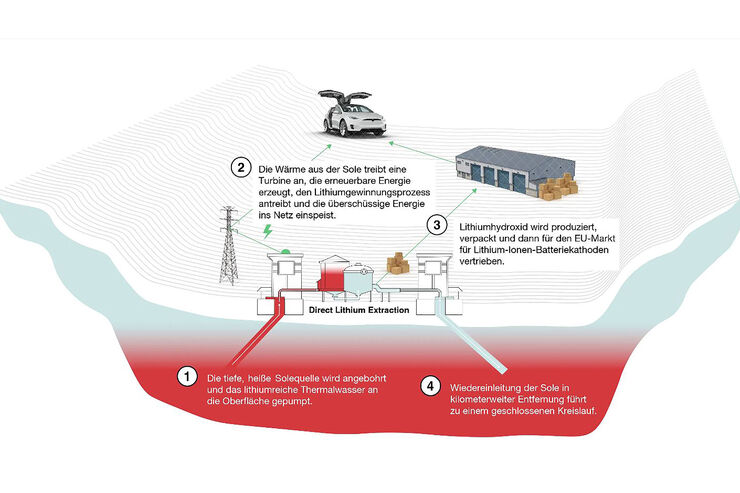 The Australian-German company Vulcan Energy Resources wants to extract an important raw material for electric cars in the Upper Rhine Graben in an environmentally and climate-friendly way. But the necessary money is still lacking.

When criticism is voiced about the eco-balance of electric cars, it is often about the raw materials for the batteries. Take lithium, for example: The alkali metal can only be extracted at great expense. Either very CO2-intensive surface mining, which is mainly practiced in Australia and China. Or by evaporation of lithium-rich water, as happens particularly in South America. As a result, the groundwater level there sinks and already water-scarce regions dry out further.

The carbon footprint also deteriorates because the raw material has to be processed into lithium hydroxide for use in electric car batteries. This is largely done in Asia – mostly in China – which requires long transport routes. As a result, lithium is a major reason why e-vehicles are already lugging around a large CO2 backpack before they have even driven a kilometer.

Lithium from the Upper Rhine Graben

The company Vulcan Energy Resources wants to massively reduce this carbon dioxide ballast. And to this end, it wants to mine a treasure that lies right on our doorstep: According to the company, Europe’s largest lithium deposit is located in the Upper Rhine Graben. The approximately 300 kilometer long and up to 40 kilometer wide lowland plain, which stretches in southwest Germany and eastern France between Frankfurt/Main and Basel, has saline deep groundwater that is said to hold tens of thousands of tons of the alkali metal.

Graphic representation of the lithium extraction process Vulcan Energy Resources is aiming for.

The company, which was founded in Karlsruhe, Germany, but is listed on the Australian stock exchange, has secured a license to extract the European lithium present in the area. In doing so, Vulcan Energy Resources hopes to meet demand, which is expected to increase sharply due to the steady rise in electric car production, “for many years to come.” The Upper Rhine Graben’s lithium is expected to be enough for up to 400 million e-vehicles. The whole thing is even supposed to work in a clean and climate-friendly way: Vulcan Energy Resources has already had its extraction process certified as CO2-neutral.

The process is multi-stage and begins with pumping the 165-degree thermal water from underground reservoirs up to four kilometers below the surface. There, it drives a steam turbine to generate electricity in an environmentally friendly way. This serves as energy for an extraction plant in which the lithium is separated from other elements dissolved in the water. In parallel, the surplus energy is fed into the public heating and power grid. The thermal water used then flows back into the natural reservoir in a closed loop system. 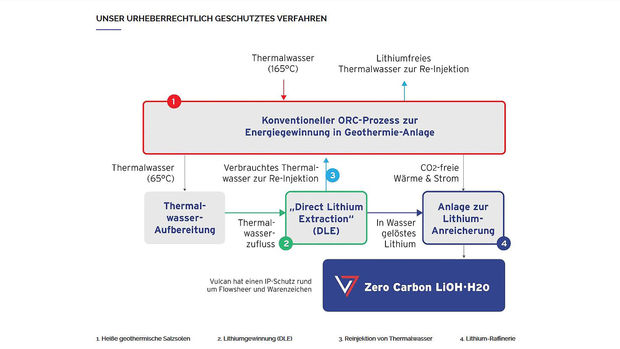 Schematic representation of the lithium extraction process that Vulcan Energy Resources is aiming for.

This solves the problem of declining groundwater levels, with Vulcan Energy Resources generally promising significantly lower water consumption than conventional lithium extraction. Land consumption and waste production are also said to be significantly minimized. The zero value in CO2 emissions seems plausible, since no fossil energy is used during the process, which is still to be protected by an international patent. In addition, the lithium is further processed into lithium hydroxide in a refinery plant directly next to the geothermal plant. This simplifies logistics and shortens transport routes.

The necessary capital is still lacking

It should then be possible to use it directly as a cathode in a lithium-ion electric car battery. And it will be even cheaper than the processes mentioned at the beginning of this article. According to the company, a ton of lithium hydroxide extracted in the Upper Rhine Graben costs 4,690 euros. On top of that, the distances to the factories for electric car batteries, which are increasingly found in Germany, would be significantly shorter. This would minimize transportation costs, further reduce CO2 emissions, and make automakers independent of complex global supply chains that can quickly break down, as recently happened with the blocked Suez Canal. 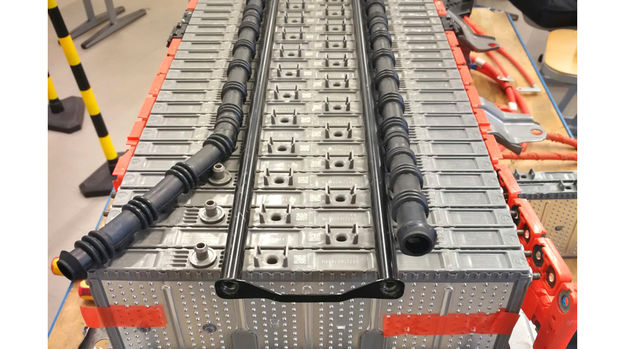 The demand for lithium will rise sharply as battery production for e-cars steadily increases.

However, it will be some time before electric car batteries are equipped with European lithium across the board. According to the Handelsblatt, the first pilot plant is scheduled to start operations at the end of the year; large-scale production is not expected to start for another three years. And that is only if the necessary financial resources – probably in the billions – are available by then.

The project in the Upper Rhine Graben has this limitation in common with other European lithium projects: Deposits of the alkali metal were discovered in the Ore Mountains a few years ago. Afterwards, the licensees changed several times on both the German and Czech sides, and the necessary capital has been lacking here as well. There are further lithium deposits in Serbia, but according to the Handelsblatt, mining has not yet begun there either.

One should not get too euphoric about lithium mining in southwest Germany yet. Especially since many local residents are likely to oppose the project due to expected drilling, which will probably be necessary to exploit the thermal water. A key factor in the success of the project will therefore be whether Vulcan Energy Resources can use existing boreholes as often as possible. And, of course, whether the company can raise the necessary money in time.