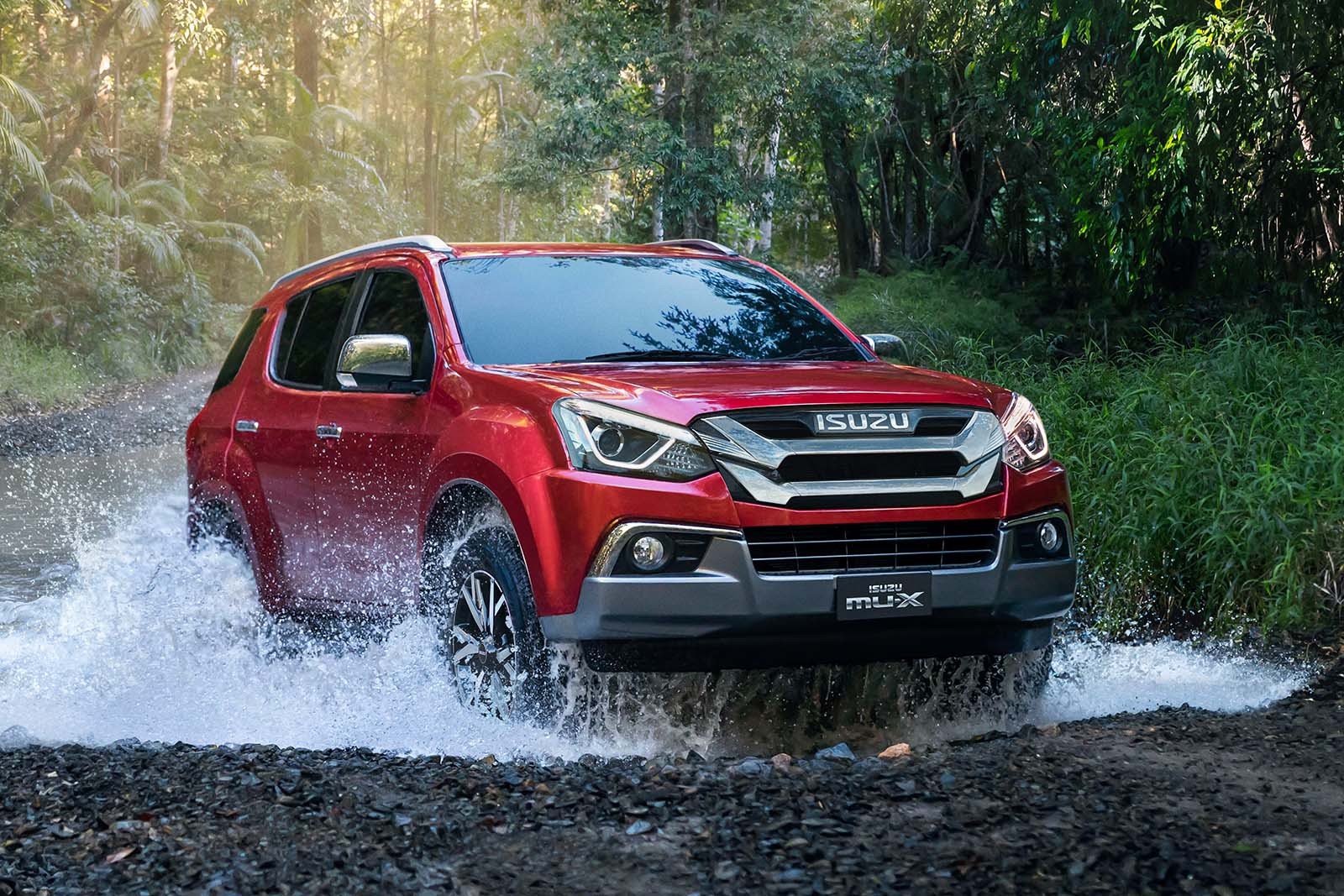 The Japanese brand Isuzu, known primarily for its medium-duty trucks, came to Russia 15 years ago. But in many regions of the world the best-selling pickup trucks have become the trademark of the brand, which successfully compete for the first place in the segment with the most famous brands. Of course, we are not talking about the U.S. market: as no one can beat Steven Seagal (as Coke Casey Ryback) in the galley, and in the home kitchen of pickups, no one can even come close to the sales figures of the “Big Three” pickups, in which the absolute leader is Ford with its F-150 model.

But, for example, in Thailand, where the main plant for the production of pickups Isuzu, brand for many years competes with Toyota products, and competes very successfully: in the pursuit of buyers purse pickup models D-Max and Hilux go literally head to head, and sometimes Isuzu pickups are ahead. The absolute sales figures of both brands are fluctuating around 130,000 units a year, and it is only in Thailand!

However, the D-Max and based on it and unified with this model off-road truck MU-X are doing quite well not only in Thailand. These models are quite successful in Malaysia, the Middle East, South Africa … In Australia, with its modest population of 25 million people, 16,892 pickups D-Max were sold year before last (with a market share of 8.9% in this segment), and MU-X overtook Mitsubishi Pajero Sport (8419 vehicles sold against 6477) and took the third place in the segment rating, with a total of 105,224 vehicles.

In our country the situation looks completely different. The pickup boom started at the end of the noughties, when the restrictive duties put a barrier to the flow of used SUVs from Europe, Japan and the USA. The majority of buyers of these cars stopped their choice not because they needed a pickup, but because they were looking for an opportunity to buy a new frame vehicle with 4×4 drive with a sufficient level of comfort. This boom lasted until 2014: between 2012 and 2014, Russians bought more than 24,000 new cars annually.

But then the introduction of the recycling fee pulled the prices for pickup trucks up to the price level of the frame SUVs on their base, and the crisis and drop in income levels predetermined a radical reduction in demand for cars in this segment, and not all brands withstood this test.

In 2015, Nissan stopped selling the Navara and NP300 models, SsangYong Actyon Sports assembly stopped in Vladivostok, and in 2019, the Fiat Fullback left us. Nissan Navara pickup trucks in 2020 were sold only 8,812 units in our country…

The structure of supply by brand within the segment is also changing. If last year we saw a clear group of premium models, oriented on a very wealthy buyer (VW Amarok and Mercedes X-class made it up), this year it seems that both these models will leave the Russian market. Accordingly, their place will be taken by the “average” models Toyota Hilux and Mitsubishi L200.

Well, at the bottom of the price scale, where the models dedicated to “professional” operation and corporate customers are located, will remain UAZ PickUp and two models from Celestial, JAC T6 and returning Haval Wingle (though, these cars were previously sold under the Great Wall brand). And what about Isuzu?

The D-Max pickups came to Russia relatively recently, at the end of 2016. At the beginning of 2017 I did a big and detailed test of this car, where with all the care I tried to tell about its advantages and disadvantages. Well, then, in 2017, I predicted that a particularly bright future for the model should not be expected: the combination of a fairly high price, frankly trucky habits and underdeveloped dealer network with a lack of established reputation in the market of civil SUVs (remember, we are talking about Russia, where Isuzu SUVs have never been officially delivered) do not allow the brand to compete on equal terms with Toyota and Mitsubishi.

But Isuzu did not give way to despondency and seriously engaged in development of dealer network (and the stake was made on cooperation with multi-brand showrooms, dealing with Japanese and European brands). In addition, it has been restyled, during which a 163-horsepower 2.5-liter diesel engine 4JK1 was replaced by a 177-horsepower 3-liter 4JJ1. As a result, sales of D-Max steadily increased year by year and in 2020 closely approached the mark of 500 (last year 498 D-Max pickups were sold). It was necessary to go further.

So the decision to certify in the Russian Federation and start sales of the next, third generation D-Max, which appeared in the world markets two years ago, looks quite logical. What is the new car, officially presented to journalists on February 4?

The essence of updating

The press release says: “A bold, aggressive design concept reflects the power and sporty character of the model, the new LED headlights, modified grille, wide sloping hood and aggressive front bumper add to the image of brutality, and clear side lines of the body and sports line of side glazing in the third height of the body create a sense of constant movement forward. The concise design of the tailgate panel and bumper with integrated step symbolizes the convenience and practicality of the vehicle’s cargo platform…”

It is possible to agree with all these statements. However, integrated bumpers clearly indicate the drift of the model from purely cargo, utilitarian direction in the direction of prestigious and comfortable universal cars, designed primarily for outdoor activities.

The body of the pickup still rests on a solid ladder-type frame, but if you compare it with the frame of the previous generation of D-Max, it is easy to find two main differences. Firstly, the cross-section of longitudinal side members of closed type has grown by 34% in width and 14% in height. There is an additional eighth cross member in the middle part of the frame, which should increase safety in case of side impact, and high-strength steels are widely used in the structure of the body’s power structure. This allowed to increase mechanical torsional strength of the body while reducing its weight.

The car itself is 45 mm lower and 30 mm shorter than the second generation, but the cargo platform slightly increased in size: length increased by 40 mm, height of the sides – by 10 mm, but the width remained the same, equal to 1530 mm. At the same time Isuzu has the highest payload in the class: 950 kg for versions with four-door and 1050 kg for versions with a half-cab.

The driver’s safety is rated as “fully green”, while the rear seat-belted passenger has been downgraded due to the risk of chest damage. For comparison, the L200 has 4 stars, while the Hilux has 3 to 5 stars depending on the equipment.

Under the hood of the new model is a three-liter turbodiesel 4JJ3 with 190 hp. It is not only more powerful than its predecessor 4JJ1, but also has significantly better torque. Maximum 450 nm is available from 1,600 to 2,600 rpm, and torque in excess of 400 nm is from 1,300 to 3,200 rpm. This engine can be paired with either an Isuzu manual six-speed transmission or the proven Aisin automatic six-speed hydromechanics.

Serious applications have been made to improve off-road performance. Firstly, the truck received a locking rear differential, and secondly, the depth of traversable ford has increased to 800 mm. This was achieved by changing the scheme of air intake in the under-hood and taking the ventilation of crankcases to a sufficient height. Let me remind you that for such professional offroaders, as UAZ Hunter and good old Defender, this figure was equal to 500 mm. And 240 mm of ground clearance also promises quite decent cross-country ability on a difficult terrain, as well as on weak ground, and in the snow.

There are some changes in the design of the suspension. The overall architecture remains the same, but the higher mounting position of the upper lever of the front suspension should reduce the roll in the turns and provide proper stability on the road, and the new three-leaf rear springs – to allow passengers in the second row to travel with adequate comfort, and without any loss of capacity.

To an even greater extent, changes that bring the pickup to a comfortable medium-sized SUV, feel in the cabin of the car. The steering column finally received adjustable not only the tilt, but also the pitch, the driver’s seat – adjustable lumbar support and the ability to change the angle of the cushions.

The saturation of “comfort options” has grown to a quite modern level. For buyers of the new D-Max provides dual-zone climate control, a media system with a touch screen (size of the diagonal – 7 “or 9”, support for Apple CarPlay, Android Auto, Mirrorlink and Miracast), 8 front and rear parking sensors in combination with the rear view camera (all this is especially relevant for pickups with their huge rear overhang), rain and light sensors, windshield wipers with built-in nozzles, remote engine start from up to 20 meters, welcome light and automatic door locks. 6 or 7 airbags are responsible for the safety of the driver and passengers in case of an accident (their number depends on the configuration). The occupants of the cabin can store all sorts of things, including branded sliding “cup holders with stash” and a lockable niche for documents under the windshield.

Seats are upholstered in “regular” fabric, “improved” fabric or a combination of synthetic and genuine leather. Top kit Premium Safety in addition to all this has received almost a complete set of electronic driver assistants: adaptive cruise control, the system limiting the maximum speed, the system of assistance in turning, lane departure warning system, front collision warning system and autonomous braking in an emergency situation, and a system of protection against mistaken pressing of the accelerator pedal.

In short, the equipment is worthy, the question is at what price. However, prices for the novelty will be announced closer to the start of sales, which is scheduled for April. And I already have, as they say, hands itching under driving gloves. I really want to try the car on the move and to make sure that “cargo” sensations, which I had behind the wheel of the second D-Max, are in the past.

Well and now it is possible to tell some words about a complete set. At the bottom of the lineup are the minimal equipment Business (with a half-cab) and Space (with a four-door cabin). They are equipped only with manual transmission, designed for purely utilitarian purposes and intended for corporate customers. The next set, Comfort, can be equipped with both manual and automatic, and could interest individual owners. The Premium lineup is even higher in level of equipment, but there is an opportunity to choose not only a machine, but also a mechanics! And the top-of-the-line Premium Safety is offered only with automatic transmission.

There is another important point, which was discussed at the presentation. The company promises that together with the entry into the market the vehicle will receive a wide range of certified accessories – covers and “cabs” that cover the cargo platform, plastic inserts that protect its metal panels, towbars, running boards… And all these accessories will be included in the certificate. Cooperation with the Arctic Trucks company, which prepared a version of the new D-Max for extreme off-road trips with a modified suspension, allowing to install mud tires of larger size, winch and snorkel, will continue. And all this off-road tuning has also received official certification!

But the most interesting is ahead. In a private conversation, Fabrice Gorlier said that next year the company also plans to introduce to the Russian market the D-Max-based MU-X off-road vehicle, and that the samples intended for certification tests have already arrived to Russia.