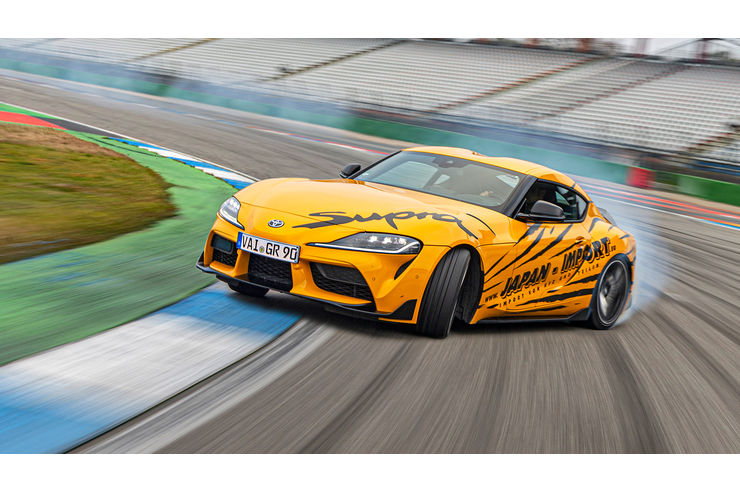 The Supra is by nature a car that likes to hang its tail out. After the power increase from Japan Import from 340 to 490 hp, the sports coupe becomes faster, but also nastier.

There is no doubt that the new edition of the Toyota Supra has hit the mark. The Japanese sports coupe knows how to enchant with its handling: powerful engine, filter-free steering, lively rear end. It’s a lively car.

It’s clear that because of this and its past, the tuning scene has found the new (old) star in it. At the SEMA show in Las Vegas, the new Supra was presented in dozens of variations. In its Japanese homeland, the industry is outbidding itself with wide-body kits. And in Germany, too, more and more tuners are taking on the Supra. For example, the guys from Japan Import are adding an extra 150 hp to the three-liter, six-cylinder turbo. According to the motto: Don’t spill the beans, but make a splash.

Everyone who meets him is staring anyway. The young man with the roller suitcase who is crossing the street looks back over his shoulder three times and nudges his buddy. The passenger in the Porsche Macan S at the gas station. Or the driver of the lowered BMW Dreier at the intersection. When this Supra is in front of you, you can’t look away. With its bright yellow paint and foiled tattoos on the body, the 4.38-meter-long and (without mirrors) 1.85-meter-wide sports coupe looks like a tiger. The tuned Supra looks like an automotive predator that is always on the lookout. Japan Import has lowered it by three centimeters on the front and rear axles (H&R lowering springs including installation: 365 euros).

Especially in the mid-range, the pimped engine pours out a fat mountain of torque. From 2,800 rpm, 690 Newton meters fall over the rear axle.

The fact that this Supra not only lurks, but quickly goes on the attack, is noticed by the driver at the steering wheel and registered by the outside world via the coarse noises the car makes. Whereas the standard model with its exhaust squeal is more of a quiet performer, here it lets the cavalry fire.

A modified exhaust system is responsible for this. The exhaust gases flow into a new downpipe, which lowers the exhaust backpressure, and then flow further into a 200-cell catalytic converter. The price for the overhaul: 1,575 euros. On the other hand, the intake air makes its way through a fresh air filter mat (80 euros). For the engine software of the three-liter inline six-cylinder turbo, Japan Import writes new codes to boost the power summa summarum from 340 to 490 hp. The engine gives it. The software tuning costs 1,800 euros and, together with other measures, results in 44 percent more power, which – apart from the lowering springs – meets an unchanged chassis. For the test and the comparison to the series, Japan Import left the series tires on: Michelin Pilot Super Sport.

Nevertheless, caution is advised, especially when the surface is still a bit damp. In Sport mode, the tuned Supra strives towards the three-lane highway, right foot more firmly on the gas, the automatic shifts down two gears at lightning speed, and … The rear axle threatens to spin out, the Supra to turn inward, until the DSC stabilizes it with a firm hand.

Even then, it’s clear that you either have to be a skilled sports driver to tame the tuned Supra. Or you’d better not put the little helpers to sleep at the touch of a button. Otherwise, it threatens to get uncomfortable pretty quickly and the driving fun ends in drama. Especially in the mid-range, the pimped engine pours out a fat mountain of torque. From 2,800 rpm, 690 Newton meters fall upon the five-link rear axle and its 275 millimeter wide tires. The elasticity measurement shows how powerful the tattooed sports car is. In fourth gear, it accelerates 1.9 seconds faster from 80 to 160 km/h than the standard model. In eighth gear, the delta is a whopping 5.6 seconds. 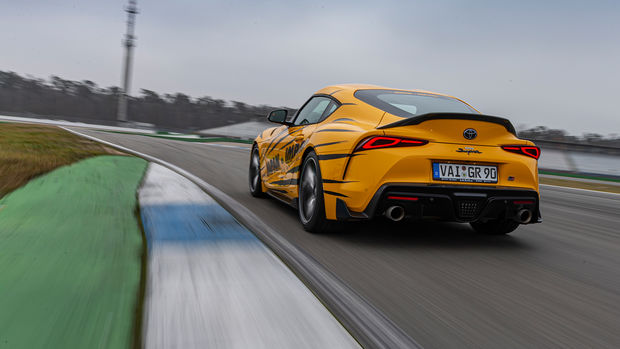 The Supra accelerates to highway speed in four seconds. The tuned model thus undercuts the standard coupé by four tenths of a second. The difference increases to 4.4 seconds up to 200 km/h.

In terms of image, the Supra from Japan Import initially raises the white flag. Too cold asphalt, far too little grip, far too much torque, far too much tire slip: Even Launch Control capitulates. Traction is only available when starting off in second gear. Lo and behold: the Supra accelerates to highway speed in four seconds. This means that the tuned car undercuts the standard coupé by four tenths of a second. Up to 200 km/h, the difference increases to 4.4 seconds. In terms of longitudinal dynamics, the bright yellow Supra with the rear spoiler lip (550 euros) is a stunner. But what about lateral dynamics?

The rear axle works wonderfully on the way into the apex of the curve. We know this from the production car. The driver can adjust the angles via brake pressure and steering angle. In this way, the Supra hits the apex with centimeter precision. That’s where things get hairy. At the exit of a corner, it’s enough to look at the gas pedal too intensively and the rear end tears out. The differential is overtaxed and can’t channel the power. The comparison with a fried egg is quite apt. As soon as the knife scratches its thin surface, the yolk runs down on all sides onto the plate.

Cross-country driving with smoking tires looks spectacular in photos. But to achieve a fast lap time, you have to steer the Supra from Japan Import with your fingertips and drive with your little toe. Nevertheless, the rear axle can’t be completely tamed at temperatures around freezing point. But those who are wide awake and make lightning-quick corrections have fun. The Japanese car finished the Hockenheim lap in 1m 55.3s, three and a half seconds faster than the production model. The yellow of the egg? The tuner wants to go further. With a larger turbo, 650 hp should be possible. Also planned: a larger brake and a coilover suspension.

The performance increase is paying off. In terms of longitudinal dynamics, the Supra clearly improves after the wash cycle at Japan Import. In the curves it becomes toxic. This means that if you pimp your car like this, you should be able to handle it. And also be able to react appropriately to the sometimes sudden surge in performance. Then this Supra is real fun.