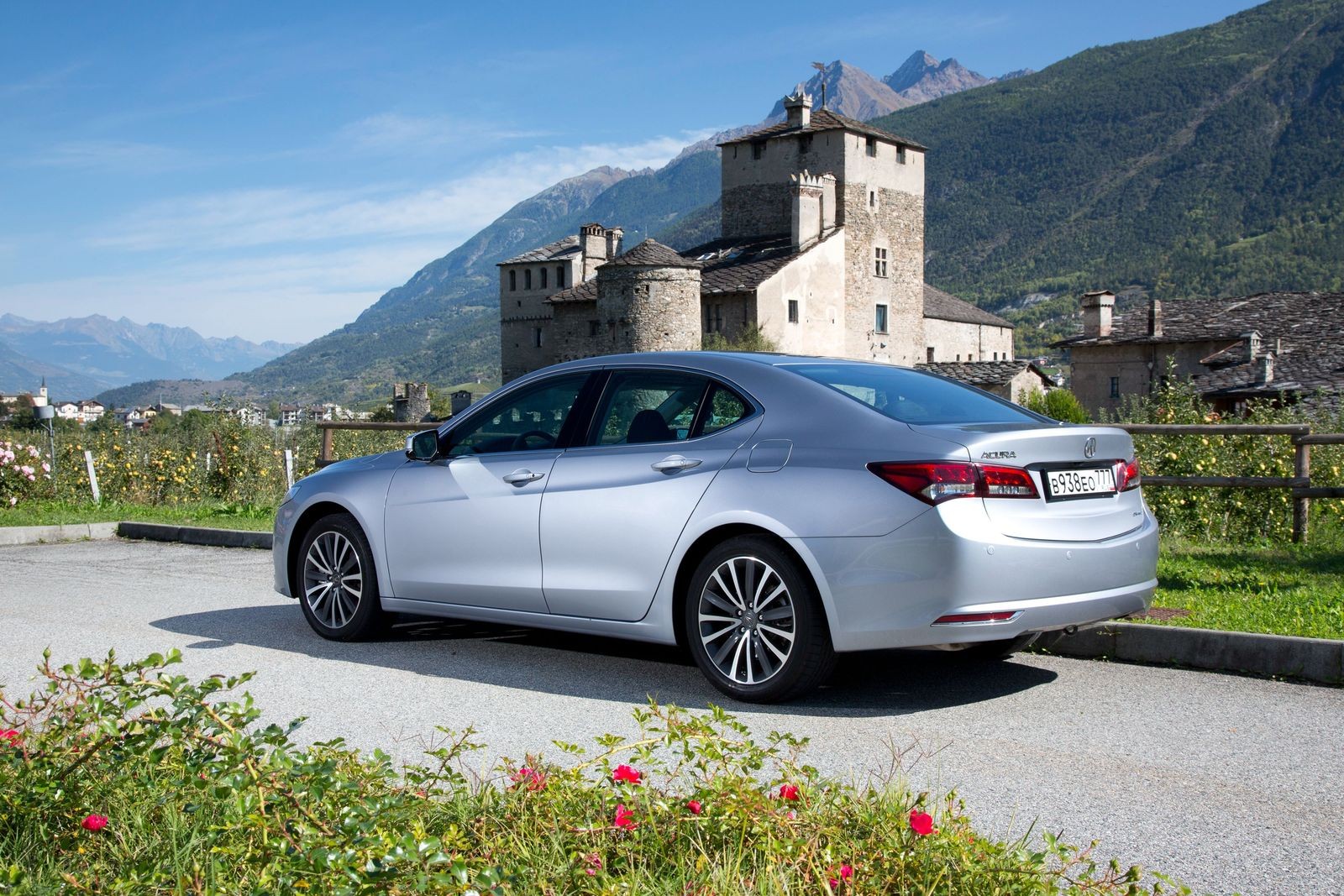 If you are not a fan of Acura or at least of Honda, you hardly remember that Acura TLX came in 2014 to replace two models at once: TSX, which was “a very rich Accord”, and TL – a remodeled and slightly stretched Accord. Apparently, the Americans, for whom these cars were made, finally got confused in the letter indices, in which the devil himself can’t understand. Therefore, the next generation received a new index, but at least one. Actually, TLX also was in essence over-looked Accord, but the sedan was not only completely distanced from the colleague externally, but also received rich equipment. Here applied the newest systems of active safety, and driver’s chips like a full drive and a fully controlled chassis with steering rear wheels. In general, it was the present present for fans. The only question is that there were not so many of these fans in Russia: despite the fact that the TLX has even been sold officially here since 2014, the number of cars in Russia numbers in the hundreds, if not dozens. Let’s take a look at how this affects their condition and what in general will please the owner of this Acura.

On the body condition the rarity of the model has an unequivocally positive effect: the cars are still relatively young and expensive, and therefore almost always remain in the status of a favorite toy. Accordingly, it is a little early to speak about body problems, the visible problems end at the level of minor defects. They are quite standard here: chrome gets blurred, windshield gets chipped, hood, besides that it is made of aluminium, sometimes upsets not only by chips, but also by swells of paint, and plastic bumpers after a spot damage of paintwork can start to peel at washing. The sunroof not only reminds of itself with a rattling shutter, but also leaks, and the roof edge and guides also need to be inspected for corrosion. There may be beginning rust on the edges of the wheel arches and at the bottom of the sills, and in the arches, where there is always moisture under the noise insulation, problems are almost guaranteed. The owners usually do not save money on anticorrosion, so the corrosion from below can affect mainly elements of suspension and exhaust system. But it is still necessary to examine the underbody of sedan with small clearance with partiality. In general, it is necessary to understand, that even the status of your favorite car and ideal external condition do not guarantee absence of defects in hidden cavities and typical problematic zones.

Traditionally, the important stage of car survey should be the check of a body with thickness gauge. In case of TLX, it is very actual, because these cars were assembled in America and for America and they came not only new. Yes, yes, despite the fact that Acura was once present in our market officially, and the TLX has been sold in dealer showrooms since late 2014, some of the cars still came to us privately from auctions. The upside here is that you can easily check their history with Carfax. The minus – is that often for the sake of economy in the U.S. they bought slightly used or restored cars. In general, be sure to check the car for accident history: in the foreign history will help Carfax, and in Russia – for example, Autoteka, where in addition to records of the accident will be data on the recorded mileage, insurance claims, restrictions, and so on.

In Russia, by the way, it is better not to get into an accident with the TLX. Nothing to say about scrap yards – they simply do not exist, but the problem is that the non-original body components also almost does not exist. As a result, the search inevitably leads to the original catalog, where the windshield costs 45-50 thousand, the hood – 65, and even the front fender or bumper costs 45 thousand. A headlight will empty the wallet for 50-80 thousand, and the price tag for the doors – from 60 thousand to six-figure sums depending on the supplier. In general, there is a reason to think about a hull insurance. Because you will not want to change your driving style for more relaxed one.

The construction of rear suspension provokes for active driving. If in front there is usual McPherson, so behind – a multilever, in which design on 2,4-liter automobiles electric actuators of rear wheels’ turn are added – the system is called P-AWS. The scheme is known: at low speeds the wheels turn in the opposite direction from front, at high speeds – in the same direction, as the front wheels. Add shock absorbers Amplitude Reactive Dampers, having in a design on two pistons for separate working out of small and more large irregularities – and you receive the chassis with a hint on driving excitement, but in a reality it is more likely grounded on comfort. On 3,5-liter cars there was no rear axle steering, but there was a full drive that adds not less driving charm.

However, now that the majority of cars are 5-6 years old, you need to think not only about driving, but also about how you have to take the sled for maintenance and repair. The difficulty here is that the TLX is not formally unified in the running gear with the Accord, so large parts like the levers here have their own numbers and have no non-original substitutes. Thus, if rear pull rods for 3-6 thousand do not cause horror, then the front L-arms for 20 thousand are already beyond decorum, especially on a background of their absolute external identity with Accord parts for which there are analogs for 6-7 thousand. Original shock absorbers are 20 thou, and the third-party manufacturers of spare parts did not mess with them either. Well and a rear wheel steering actuator, if suddenly something happens with it, it will have to be repaired to the last: a new one costs 130 thousand. Fortunately, at least in the details, the Japanese did not cheat, inventing separate codes for the ball bearings and struts stabilizer – they are officially unified with Accord and are available as non-original for 600-800 rubles instead of 4-5 thousand.

The brake system of TLX, of course, includes disk mechanisms in a circle, and the Japanese noted that the thickness of the front discs is increased to 32 mm. Probably, it was called to justify appropriation of the separate code, though the same disks with diameter of 320 mm and thickness of 32 mm, fortunately, are used on Accord. Knowing this you can choose not-original disks for 3-7 thousands or even the original from Accord for 10, instead of buying “exclusive” for 18-20. As for the rest, brakes are quite usual – you need only to check up line continuity and fluid condition, though they will hardly be started. And you can also examine back tires: at sharp braking, actuators on rear axle turn both wheels inwards to increase efficiency and stability of deceleration – and this, as it is easy to guess, somewhat accelerates wear of rubber.

The TLX has electric power steering, not on the steering shaft, but on the rack itself. Probably the third time the sensational remark that the rack, despite the external resemblance to the Accord, has its own code, will sound a little faded, but the fact is a fact. And the point is not even in that the price of the original rack assembly is six-figure – it is six-figure for Accord, even if by 50 thousand less. The point is that there are variants of restored lattices for Accord for 40-50 thousands, and the “native” one should be rebuilt. However, it is not a big problem – the repair price will be in any case literally by an order of magnitude lower than the purchase of a new unit as a complete unit. In general, thanks to the Japanese at least for the fact that the electric booster motor is available separately, even if for 45 thousand rubles.

As we already know, the cars with the 3.5-liter engine were deprived of the all-wheel drive chassis, but endowed with the SH-AWD all-wheel drive. Instead of rear differential they used two sets of hydraulic-controlled clutches which transmit power to each wheel. The advantages of such decision are the possibility to transfer up to 70 % of power to the rear axle and imitate blocking of interwheel differential. The disadvantages are also clear: sooner or later it will come to repair, which for rare and specific designs is not cheap. Therefore, when buying it is worthy to check all-wheel drive and to inquire about periodicity of its service. The cardan, by the way, also should not be neglected: even the suspension bearing is not subject to substitution, and it is replaced together with a cardan for 65 thousand.

We already know that the Acura sedan has two engines. The base is in-line four-cylinder atmospheric K24W7 on 2,4 liters, giving 206 hp. It, however, is not so simple as its predecessors like series K24: to system i-VTEC here was added direct injection which increases requirements to service and appreciably raises cost of repair. The chain timing is not bad here, and one need not be afraid of the phasing system: the phasing unit costs 12-15 thousand. But it is necessary to clean throttle valves regularly, monitor the condition of the catalytic converter and cooling system. Of course, also the fuel quality: HPF costs 50 thousand, and Honda prefers to sell injectors as a complete set for 45 thousand. In general, the engine is not bad, but rather complicated and potentially expensive to maintain and repair.

The same can be said about the V6 with the index J35Y6, producing 290 hp. The motor, as well as the 4, has no supercharger, but is equipped with direct injection. There is one camshaft in each cylinder head, and the timing is driven by a belt. Completing the design is a system for disconnecting part of the cylinders, called VCM. Accordingly, no one cancelled potential investments in fuel equipment (fuel injection pump for 70 thousand and injectors set for 50 thousand, yes, yes), and to other potential troubles is added probability of oil leakage from under control valve of VCM system. But the engine is atmospheric – practically all owners of these cars calm themselves with it.

Now that we briefly dissected the features of the Acura TLX, it became clear that the choice of the car will be quite difficult not only because of the rarity of the model. You’ll also have to decide what’s more important to you: the all-wheel-drive chassis, the classic automatic transmission, all-wheel drive, a powerful motor or something else. In fact one desirable option is necessarily accompanied by a set of others, not always desirable. It seems to us that to save money when buying this premium sedan makes no sense: investment in the transport tax and gasoline can pay for itself compared with the repair of a rare robot transmission, and a full drive in the Russian conditions is certainly more useful than the steering of the rear wheels. Fortunately, we will not have to choose a complete set: Acura has always conditionally maximum one. Thus, the optimum choice seems to us here such car: with a 3.5-liter engine, all-wheel drive and mileage a little over a hundred thousand kilometers. The main thing is to fall in love with it so not to spare money for service and possible repair. In fact, this is the sense of possession of the premium car.