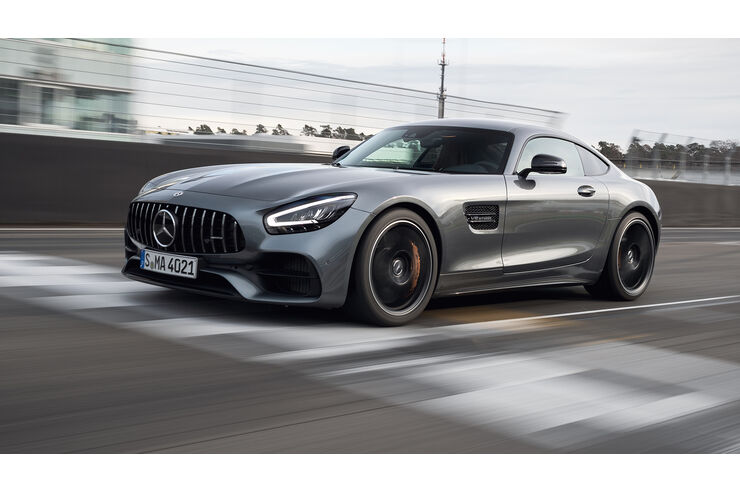 A gray suit instead of a flashy punk skirt? Why the quiet tones? Is the approaching retirement starting to rub off? Has the AMG GT perhaps even grown old? Certainly. But it has become one thing above all: better!

Admittedly, this sounds like a macho phrase, which – let’s be honest – would somehow fit the chest-hairy charm of the giant schnauzer. In this case, however, there is some truth in the eternal male wisdom. Although it is in the nature of things that sports cars evolve over the course of their existence, that edges are sharpened and talents are emphasized, in the case of the GT the evolutionary stages seem particularly purposeful. And no, we’re not talking about wild growth in the form of ever more extreme model ramifications, but rather the successively strengthened trunk.

But first things first: Let’s briefly rewind to 2015, the year the SLS successor was born. AMG had just banged the advertising drum hard with a TV commercial: A little Porsche fan is lying in bed and wakes up because of the new attacker from Affalterbach. Message: “The car you dreamed of as a child has just been overtaken!”

Well, at some point, of course, it was a matter of putting words into action. And so the full-bodied promise was made one day at Hockenheim – at that time still in juvenile candy red. I remember it well: the driving pleasure immediately boiled over. V8 bass, massive thrust, the perfect balance of the transaxle principle, plus the seating position close to the rear axle with that insane view over the Great Plains of the front mid-engine. A dream, but a beautiful one.

No bargain, but good value

Starting at 124,278 euros, the GT is a good 4,000 euros above the original 476-horsepower base, but also 15,000 euros below the eight-horsepower weaker S, which has now been discontinued.

On the track, however, it didn’t really run smoothly. The long forehand seemed jittery, the rear end did whatever it wanted. Grip, slide, sometimes more of this, sometimes more of that, but rarely what you expected. After the timed lap it was clear: The boy can go back to sleep.

But instead of leaving the GT to its fate and proclaiming defenseless jaguars as targets instead of the 911, eager optimizations were made. The electronically controlled rear axle lock, which in retrospect turned out to be THE troublemaker, was better and better controlled, all characteristic curves were combed through and freshly ironed out. In addition, tricky technologies were introduced in the coupe – above all rear-axle steering, which finally put the GT family on the right track. On the road to success.

All of these achievements are now bundled together in four GT versions, with varying degrees of refinement. At the top: the wild Black Series, from which the advertising boy would probably have run away screaming. Below that, the somewhat more civilized, but by no means civilized, Gernegrün called GT R nests. As well as: the GT C, which combines minimally milder ingredients with the broad stature of the top models. Nothing new? Yes, there is: the base, which will be set up differently from now on. From formerly two models only one remains. This one.

It’s simply called the GT, just like the previous entry-level version, but in terms of content it’s largely the same as the GT S. Its four-liter biturbo engine is a bit more powerful. Its four-liter biturbo produces 530 hp, and you have access to all the surcharge goodies, such as the aforementioned rear-axle steering, while the entry-level price – gee whiz – takes a step down. Starting at 124,278 euros, the GT is a good 4,000 euros above the original 476-hp base, but also 15,000 euros below the eight-hp weaker S, which has now been discontinued.

So is it a bargain? Tendentially, yes. In any case, you get a good deal for your money. Even sound. Plenty of it, which is astonishing, since there is so much complaining about it elsewhere: You can no longer do as you like, the common regulations, oh dear oh dear. But as far as I know, they also apply in Affalterbach. Nevertheless, the GT growls, grumbles and seethes almost like it did when it was young. It may be that the exterior acoustics have been trimmed a bit in the meantime, but inside there’s still the full blast: from fine bitter to dark bitter, depending on the mode, and always with plenty of rhythmic brittle.

Fine tuning for all 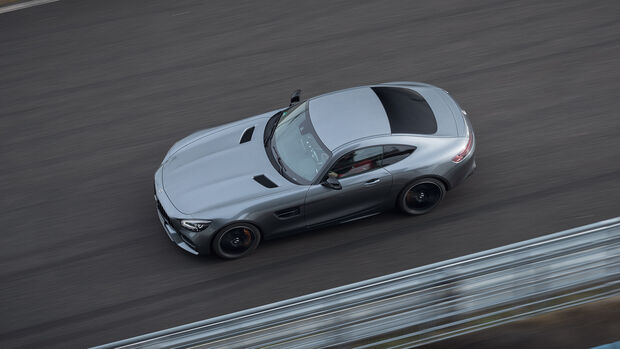 Progress in three points: The outstanding steering in combination with high traction and the finely working ESP.

The only thing that kills the mood is the control concept. The rotary knob is a thing of the past; instead, there are now plenty of touch fields. One on the center console, two more on the steering wheel spokes. Easy to understand? Let’s put it this way: you get the hang of it. More importantly, all the rest is now second nature.

We talked earlier about fine tuning and so on. The great thing is that this development is not something you only notice at the limit, so it’s not just progress for the fastest ten thousand. On the contrary, it is also evident in everyday life. One point: this absurd relation of motion sequence and movement apparatus. From the driver’s seat, the GT first appears roughly motorized: the clunky steering wheel, the massive center console, the angrily rumbling V8, plus a weight of 1,678 kilograms. Petite is different, yet everything feels exactly the same. Outstanding: the steering. Highly sensitive around the center position, feedback-intensive and homogeneous, it pulls you by the elbows into the outstretched stem. Secondly, there’s the traction, which is basically higher than what you’d want to expect from the rear axle. And if you do overdose, you’ll end up – another important point, the third – in the arms of mummy ESP, which pats away impending lurches instead of slapping you down. Even in the wet.

And speaking of wet conditions. Wet conditions are not exactly a ceramic brake’s favorite discipline. In any case, you should always allow for a more or less slight delay in response. Here? Not here. Even in the pouring swirl, the effect is immediate. Impressive – like the braking performance overall.

Once again, there is nothing, but really nothing, of the chaos of the early days. The hick-hackers have merged into a team that ultimately makes the GT the star. However, the team is still not completely homogeneous. In a positive sense. The handling characteristics definitely result from the fine, or rather: from the step-by-step finer and finer interaction of all those involved in the driving dynamics. However, the engine still makes the decisive difference. Okay, at first we made fun of it when it threatened to sink into the footsteps of the mighty 6.2-liter naturally aspirated engine with its dinky three thousand nine hundred and something cubes. In the meantime, it’s clear that its predecessor would have been proud of it.

And: powerless. The AMG GT mills up to 100 km/h in 3.8 seconds thanks to its bursting elemental power. And this value is still in the field of tension of 670 rabid Newton meters on the one hand and a stressed drive axle on the other. In other words, the full extent of its vehemence is only revealed in the further course of acceleration, when it can rev to full throttle without regard for loss of grip – for example, in the range from 100 to 200, which it completes three tenths faster than the previous GT S. And what does that mean? And what does that mean? Straight lines are mowed down, blown away by the two superchargers, accompanied by a barbaric roar and the shifting beats of the dual clutch, which give the speed sensation another slap on the back of the head every few thousand revolutions. 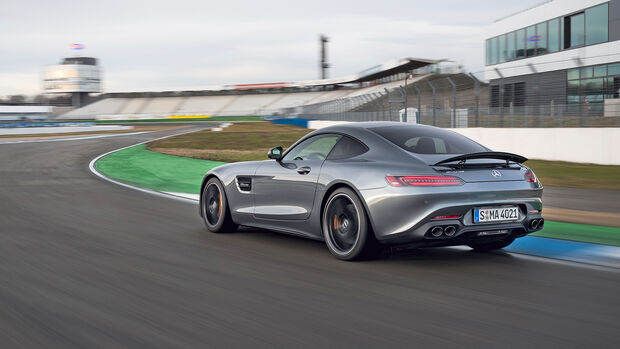 The GT’s performance still comes from its muscles, from concentrated offensive power, from shooting power. The only difference is that you can now handle it all.

Then the time has come: Six years after its premiere, a GT is back in Hockenheim. The anticipation is unbroken, only this time the Porsche disciples have every reason to roll around in their beds. Yet the basic principles of the AMG haven’t changed that much: The GT was never the prima ballerina, not one that tiptoes along the racing line. No, its performance still comes from its muscles, from concentrated offensive power, from shooting power. The only difference is that you can now handle all of this. The torque cannon is no longer stuck between your thighs, but is strapped to your chest in an authoritative driving experience. The front axle is full, the rear axle nicely neutral – thanks to the lock, which now has the hang of it. It knows exactly when to keep the 295s in tension, and when it’s allowed to be a bit transverse. And it knows how to interact with the steering impulses from the rear wheels.

That’s right: It smells of ingenuity from a retort, of microfiber-based handling properties. But this is not the case. For one thing, AMG has somehow managed to sneak the car’s own life out of the driving experience undetected. For another, the driver is still a mainstay of the performance level despite the increased technology level.

The way up may now no longer be a slog that shakes off everything this side of Bernd Schneider. Nevertheless, you still have to be careful where and how you step at the limit. One wrong movement of the throttle is enough and the lateral dynamics, which have just been painstakingly put together in the rear, are completely overhauled. Or it’s been made ridiculous by the fact that – according to the motto “drift happens” – the driver has decided at short notice that he’d rather approach the south curve broadside. With a mischievous grin on their faces and smoke billowing all the way to Karlsruhe.

But when self-control and ambition come together, or better yet, when they grow together through confidence in the machinery, then dazzling times emerge – times that no longer have much to do with the past. Neither in the way they came about nor nominally. Unfortunately, it’s impossible to say exactly how much the difference is compared to the early series because, as you know, we’ve moved from the small track to the Grand Prix circuit. One thing is certain: it’s big. This can be seen above all in the fact that the GT, with a 1:53.7 min, can now even stand up to the successor generation of its former visionary target.

Will this deprive Porsche fans of sleep? That remains to be seen. In any case, the lap time is ripe for the announcement that their dream car has just been caught up.

Sure – e-cars are almost the present, and extremely powerful to boot.

The road was bumpy, but now it’s a fact: The AMG GT is the first in a long time and currently the only one that can match the performance of the Carrera S on the track. With a performance advantage, yes, but on a comparable course. Whether it’s the better experience? A question of temperament. Porsche plays the fine game, while the AMG remains a racing dragster, but now with contours.