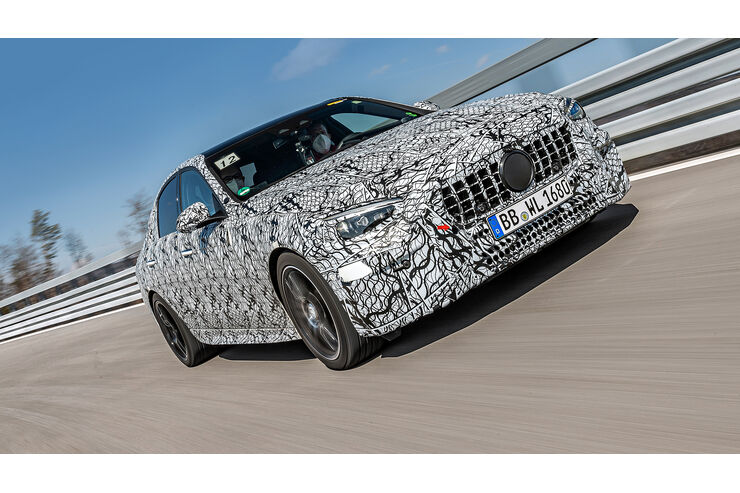 The new Mercedes C-Class leaves no room for the V8 engine, so the AMG four-cylinder M 139 has to take over – for the first time with belt starter generator and electric exhaust gas turbocharger. What are the benefits of the technology? A drive in a special test vehicle allows a direct comparison.

From the smartphone sucking in its holder on the windshield, a tinny – well – female voice buzzes: “You’ve exceeded the speed limit!” A glance at the speedometer: 130 km/h. Ten over. A pity, yes, although not particularly tragic in this case. Transmission mode manual, fifth gear, let the revs settle at 1,500 rpm, the speed drops well below the permitted one. “Now give it full throttle!” orders Jan Habermann. The engineer works as a component manager for the electric exhaust gas turbocharger at Mercedes-AMG, balancing a laptop on his thighs. Full throttle.

Nothing happens. The virtual needle of the tachometer creeps doggedly up the scale, the drive only suggesting life from 3,000 rpm, then at 4,000 rpm the torque explosion occurs. “Okay. And now the whole thing again,” says Jan, tapping away on the keyboard. Another 1,500 revs, the two-liter four-cylinder unit hums away contentedly. Full throttle again. The C-Class immediately comes to life, the powertrain responds immediately, much more vehemently than before, and the power builds up harmoniously. Like a naturally aspirated engine? No, of course not. At around 3,000 rpm, another small flash of torque shoots through the powertrain, the peak has now been reached. The phlegm, the turbo lag, no, the turbo crater: gone. How so? In the front of the C-Class is the M-139 engine from Mercedes-AMG with electric exhaust turbocharger, whose six-kilowatt electric motor can be switched on and off in this test vehicle via laptop.

Under real-life conditions, a consumption advantage of between 10 and 15 percent could be realized, also because with moderate power demand, it is now often only necessary to shift down one gear and not two in order to call up the desired acceleration.

The four-centimeter narrow, disk-shaped motor sits on the shaft between the compressor and the turbine, but not in the center but near the bearing, otherwise the shaft would be too heavily loaded. The advantage of the system is that the engine accelerates the compressor wheel with its maximum power for a few seconds, thus building up boost pressure (up to 3.8 bar absolute) before the exhaust gas flow reaches the turbine wheel.

The continuous power of the engine is around 3 kW, but primarily the power required depends on the driver. “The decisive factors are precisely the faster response and the significantly higher torque at low engine speeds,” says Jochen Hermann, head of technology and member of the management board at Mercedes-AMG. But why four-cylinder instead of eight-cylinder at all? “After all, the four-cylinder with eATL comes in conjunction with our performance hybrid system. The performance that would then result in combination with the fuel economy would not be possible with the V8 biturbo engine alone,” explains Hermann. Currently, only this much is known: The revised M 139 has an output of “more than 330 kW,” and the electric motor on the rear axle could deliver up to an additional 150 kW. And that would bring the total to 653 hp.

Hermann is confident that “the debate about eight and four cylinders will soon be settled. Particularly since a consumption advantage of between 10 and 15 percent could be realized under real conditions, also because with moderate power demand, it is now often only necessary to shift down one gear and not two in order to call up the desired acceleration. 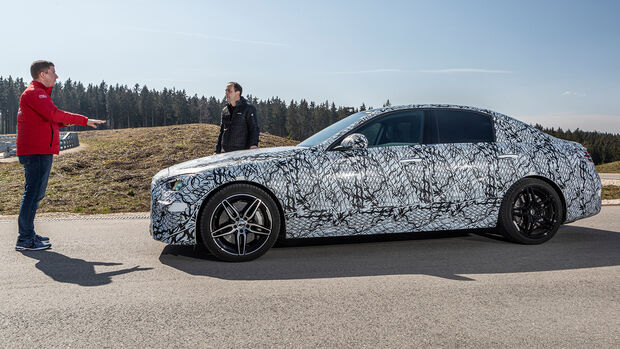 The drive operates with a system voltage of 400 volts, and a belt starter generator is also integrated. “This means that the drive always delivers the necessary performance, even on a trackday.”

The special feature of the hybrid system: the battery capacity is only 6.1 kWh (NMC cells with a working temperature of 45 degrees Celsius), but the battery therefore weighs a comparatively slim 89 kg. The continuous power is 70 kW, and 150 kW is available for a time window of ten seconds. And the recuperation power? 90 kW, in peaks up to 110 kW. The drive operates with a system voltage of 400 volts, and a belt starter generator is also integrated. “This means the drive always delivers the necessary performance, even on a trackday,” Hermann promises. Now the question becomes: Why go to all this trouble with the eATL? Why not use the e-motor on the rear axle (with two-speed transmission and fully variable limited-slip differential) to fill the turbo hole? “The motor then works against the resistance of the gasoline engine, plus the battery would have to be larger,” answers the engineering chief. And the electric range? That remains unanswered. In any case, the C 63 won’t get an E license plate, because that would require a range of at least 40 km, and from 2022 even 60 km. The Mercedes-AMG is unlikely to manage much more than 20 km.

The test vehicle won’t, anyway, because it doesn’t yet have any PHEV components. Instead, the eATL is powered by a belt starter generator with a 48 V supply. Output of the M 139 here: around 310 kW, i.e. 421 hp, as much as in the current A 45 S. After a few acceleration scenarios from set gears at a rather low speed – here the engine’s spontaneous response and the punchy, smooth power buildup with the extra kick are always impressive – it’s time for launch control acceleration. So: click on Sport Plus mode on the lower left control panel of the steering wheel, fully depress the brake pedal, and the accelerator pedal as well. Foot off the brake, the C-Class shoots out of the starting block, bassy red-deer roaring (the final sound has not yet been defined), at around 7,000 rpm the nine-speed gearbox lays on the accelerator, ultra-fast, with a gentle jolt. 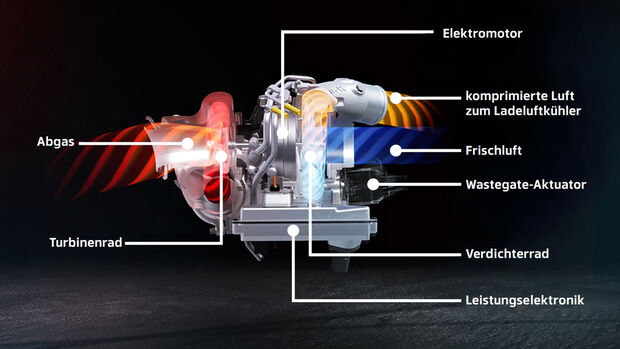 The eATL in detail: Any surprises? Not really, because the design of the supercharger corresponds to familiar systems. The only difference is that the compressor wheel can now be accelerated without exhaust gas flow, and the electronics also enable very precise control, including of the wastegate valve.

The same again, with the supercharger motor deactivated. There is no lack of vehemence now either, but the gear changes seem almost stumbling in direct comparison. Without the electronic control of the supercharger, for which the electric motor can supply many parameters, the so-called overshoot is lower, i.e. the brief spike in compressor wheel speed after ignition has resumed. As a result, the application gap can be smaller, i.e. the delta between the defined and absolute maximum speed. The key figures for the eATL: 156,000 and 160,000 revolutions, i.e. around two percent. For the conventional exhaust gas turbocharger, it’s over five percent. Meanwhile, Jan has reactivated the e-motor, the M 139 rages, the speed increases.

The robot lady in the smartphone is keeping quiet for the moment, even though the speedometer will soon be reading 200 km/h. It’s a good thing that there’s a road on the opposite strait. Good thing there’s no speed limit on the back straight. But the steep southern curve of the circuit is approaching, so we brake, let the lateral acceleration take effect, then quickly shift into eighth gear via the shift paddle to enjoy the pulling power – and now we’re back to observing the speed limit.