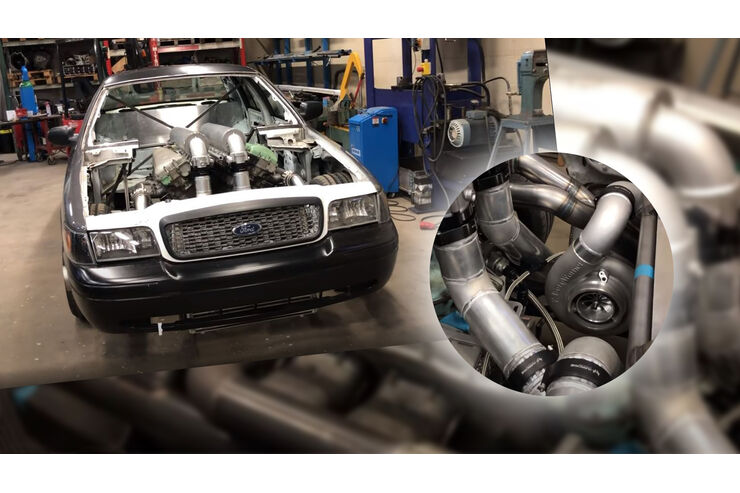 Somebody’s hungry for power: this sedan by Daniel Werner blows 2,500 hp out of 27 liters of displacement. At its heart: a Rolls-Royce tank engine.

In Sweden, an auto motor und sport reader lives with a particularly spectacular project car. Daniel Werner is upgrading a former police car from around 240 hp in its basic version to 2,500 hp. To do this, the 48-year-old management consultant planted a World War II tank engine in the comparatively slim Ford Crown Victoria. We call the 5.4-meter-long, two-meter-wide U.S. sedan “slim” because the engine is a Rolls-Royce Meteor with a displacement of 27 liters.

Why squeeze a tank V12 into a Ford? The answer is simple.

Because this conversion is so delightfully bonkers, we contacted the good Mr. Werner and asked him a few questions about the car he has christened Meteor Interceptor. The most obvious one right out of the gate: Why? The answer is no less obvious: “I just always wanted to put a really, really big engine in a normal passenger car. Preferably the largest possible model” Joa, good. That’s understandable, of course. However, this plan is not entirely trivial.

The search for the right engine took several years – initially without success. “I looked around for big V8s. But analogous to the size, the purchase price also grows. At Sonny’s Racing Engines in the U.S., for example, there was a V8 with more than 16 liters of displacement, but for $100,000 that wasn’t really an option for me,” Werner recounts. That’s how the decisive step into the realm of aircraft engines finally came about. There is the Rolls-Royce Merlin, for example, but what’s even better is that in 1943 the Meteor is derived from the Merlin for installation in British tanks. And this 27-liter V12 is both easy to get and cheap to buy.

Vitamin B is important

From here on, as with any ambitious project, it’s also about good contacts. Fortunately, Daniel Werner knows someone who knows someone who lives in Finland and bought 50 Meteor engines from the Swedish military. One of them is now back in Sweden, in the workshop of our tinkerer, who paid around 6,000 euros for the massive V12. So all that’s left is to find a car suitable for fitting an 835-kilo gasoline engine.

“I was looking for a car that was, of course, on the one hand big enough for the Meteor to fit in. An old Rolls would have been nice, but they’re just too expensive,” Werner explains. The fact that the choice finally fell on a Ford Crown Victoria is very conclusive on closer inspection. The old patrol car is cheap to buy and sits on a box frame. This means that the vehicle is designed in such a way that the entire front end, including the engine and axle, can be replaced quickly and easily. For this purpose, the fenders, for example, are bolted and not welded. A supporting frame structure for the extra weight is still needed, of course. 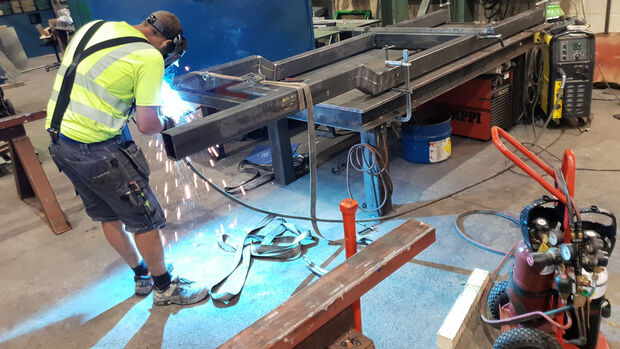 The Rolls-Royce engine weighs 835 kilograms. The frame needs some reinforcement.

By now, you’ve probably got an idea of how ambitious it is to install an aircraft-derived tank engine in a normal car. Daniel Werner has already been tinkering with his dream car for three years, and every single step is a challenge. Even the question of a transmission to match the low engine speeds. You guessed it: This is where contacts come into play again. Charlie Broomfiled from Great Britain has already realized a similar project and transplanted the Meteor engine into a Rover SD1. So the Brit could help marry a custom planetary gearbox to a beefed-up version of the Chevy TH400. This is the configuration normally used by drag racers, which also boast engine performance beyond all reasonable limits.

So the story continues – for every new problem, the right helper has to be found. There are a couple of guys from Sweden who have installed two Meteor engines in one boat. Of course, this is of little use for moving around on land, but they had the right tricks up their sleeves for fuel injection and connection to a modern control unit. Although one could almost assume a scene in view of this network, all the solutions are one-offs and tinkering that require patience and dedication. Daniel Werner expects the Meteor Interceptor to keep him busy for another strong year, until it’s just a matter of cosmetic detail work. In the meantime, the two Borg-Warner turbochargers have moved into the engine compartment. And with plenty of welds that should bring tears of joy to the eyes of metal aesthetes. Werner is planning the first launch of the massive machine this summer.

The final question to the V12 wrench is perhaps just as obvious as our first: What does one want to do with a tank engine-powered car? Part of the goal is indeed the proverbial journey: “Building a car with a giant engine is in itself the most important thing for me. But my dream would be to drive it across a salt lake in Bonneville (USA) one day,” Daniel Werner muses. In view of this wonderfully crazy project, we sincerely wish him the fulfillment of that dream. If you would like to follow the work on the Meteor Interceptor, you can do so via Daniel Werner’s social media channels.

Daniel Werner inherited his enthusiasm for cars from his father, who gave him his first driving lessons at the age of eleven and his first tinker car (a Volvo) at the age of 16. Today, Daniel Werner privately drives a RAM 1500 with a 5.7-liter Hemi and soon, we hope, a Ford with a 27-liter V12.