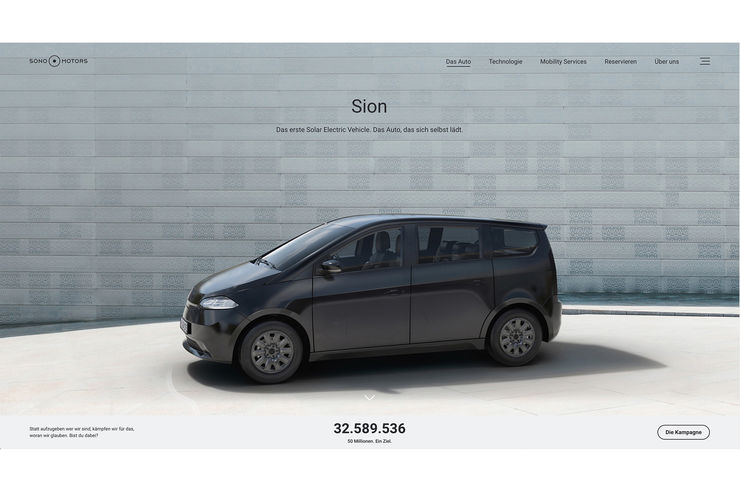 At the end of 2016, Sono Motors from Munich caused a stir in the electric car scene. The announcement of a low-cost electric car that is practically self-fueled from solar cells housed in the car body had caused euphoria. At the beginning of January 2020, the project was threatened with a sudden end, which was averted with another crowd-funding campaign. We trace important stations and events of the four years to date in chronological order.

The Fraunhofer Institute for Solar Energy Systems ISE is to support Sono Motors in the testing and certification of the solar charging technology. According to Sono, the cooperation announced at the end of October is aimed at “testing and certifying a novel technology for integrating solar cells into the body of electric vehicles”. Sono sees solar charging as the core argument for the announced Sion electric car. The solar charging technology developed and patented by Sono Motors is to be integrated directly into the body structure. The Fraunhofer Institute will investigate the safety and reliability of the technology. Sono Motors states that the solar modules distributed over the entire vehicle are to produce the amount of energy for up to 34 kilometers of electric driving every day. According to Sono Motors, the cooperation also serves the essential goal of “identifying possible further areas of application in order to advance the certification of solar technology beyond electric cars”.

Sono Motors informs about the commissioning of Roding Automobile GmbH from the Upper Palatinate with the production of the Sion prototypes. Roding had already produced the first prototypes with which Sono Motors had carried out the customer drives. At the same time, Sono announced that instead of the originally planned four prototypes, only two will now be produced, which correspond to the current state of development and will be equipped with components from the suppliers for the planned production vehicle, including the e-drive from Continental. The completion of the prototypes, which was originally announced for the end of September, is expected for November 2020, with reference to the corona crisis.

On Facebook, Sono Motors announces the success of the new funding campaign. 50 million euros in payment commitments have been achieved. According to the financial plan, this sum will be used to finance, among other things, the construction of near-series prototypes. This is particularly important for Sono Motors, because it will enable new reservations to be obtained at test drive events. Having achieved the first campaign goal, Sono Motors will now, from January 20, ask the reservers and funding participants to make the promised payments. Supporters have 30 days to do this.

On January 18, 2020, the campaign goal of crowdfunding was achieved, with pledges of more than 50 million euros.

Sono Motors is announcing an increase in funding by ten million euros through an announcement in various social media channels. According to Sono Motors, these funds will come from the investment company WiVenture and the German ELFH Holding and will be in the form of so-called convertible bonds. With this new financing commitment, the crowdfunding sum will increase to 44,874,953 euros (as of January 9, 2010) according to Sono. This leaves about 11 days to raise the remaining approximately 5.1 million. This will initially be used to finance the ongoing business and prototype construction of the Sono Sion. For the final series production, the Munich-based start-up company estimates a further 205 million euros in financial requirements.

The self-imposed timeframe for reaching the 50 million Euro limit via crowdfunding expired on 30.12. According to Sono, there are payment commitments of around 32.5 million euros through reservations, top-ups and donations. However, the original plan to terminate the project in the event of such an outcome has been cancelled. Now the “community” is to vote on whether the campaign will be extended again. The deadline this time: January 2, 2020. 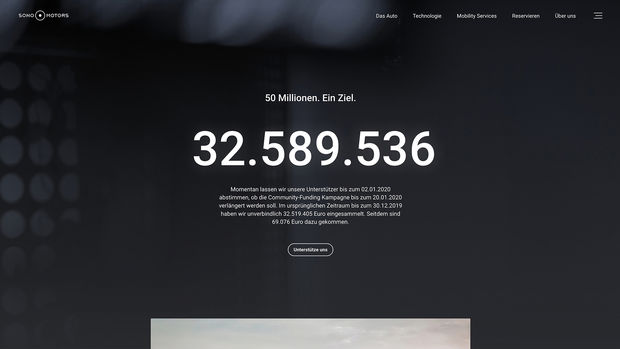 Closing balance on December 31, the targeted amount of 50 million Euro was not reached

The three founders transfer their profit sharing rights of around 64 percent to the “Community Pool”. They calculate a value of around 70 million euros for these rights. Pre-orderers are thus to participate in any company profits or receive corresponding shares in the event of an IPO.

Sono Motors is publishing a video statement on further timing in the event that the financing of a total estimated 250 million euros is secured. According to plan, the first final prototype is now to be built in the 3rd quarter of 2020. The now announced start of serial production is postponed to the first quarter of 2022.

In a circular letter to the funding donors and in an emotional video on the Sono homepage, the founders explain the termination of their talks with investors. Instead, they will now try to collect a sum of 50 million euros via crowd investments / advance orders / down payments by the end of December. A further 200 million euros are needed to start serial production. 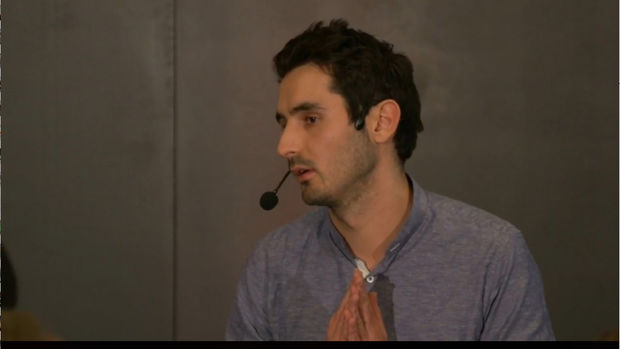 On live-transmitted meetings of the Sono management with Sion Vorbestellern in several German cities the prospective customers are to be convinced of the increase of their deposit sum.

The unique selling point of the Sion, the solar charge, will face competition from Japan. Toyota, where in the Prius PHEV, solar modules have been installed in the roof for years at extra cost, thereby (to a lesser extent) increasing the electrical range, is providing information about a new research project. Test vehicles equipped with new types of high-performance solar cells from Sharp are to offer a maximum yield of 860 watts and thus generate an electrical range of up to 44.5 kilometers per day under ideal conditions.

Sono Motors puts the number of prepaid reservations for the Sion at 10,000 units.

Sono Motors is presenting the series design of the Sion, which differs significantly from the two prototypes previously shown. It is also announced that the electric car manufacturer NEVS will manufacture the Sion in Trollhättan, Sweden. NEVS emerged from the former Swedish car manufacturer Saab and is majority owned by a Chinese real estate company. Production is now scheduled to start in the second half of 2020. 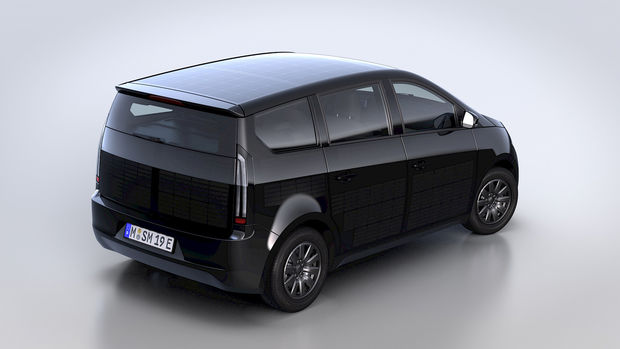 The Sono Sion in its final form, it is larger than the first two prototypes

According to Sono Motors, Bosch will supply the Connectivity Control Unit for the Sion. The communication module is an important part of Sono’s plan for Sion owners to share their vehicle with other people. The CCU makes the Sion accessible for smartphone apps and is also suitable for the exchange of telematics services.

The fund company, which wanted to subscribe to a 4.5 million Euro investment, announces the dissolution of the special fund and its reversal. The investment mentioned in October will accordingly not be made.Sono Motors corrects the battery price. Instead of the originally announced 4,000 Euro purchase price, the drive battery is now to be purchased for 9,500 Euro. Accordingly, the announced purchase price of the Sono Sion will increase from originally 20,000 Euro including the traction battery to now 25,500 Euro. The monthly battery rental price will be between 90 and 140 euros, depending on the subscription.

At the same time, Sono Motors is informing that it intends to purchase the drive unit from the automotive supplier Continental. Analogously, the announced power output of the Sono Sion will increase to 120 kW/163 hp 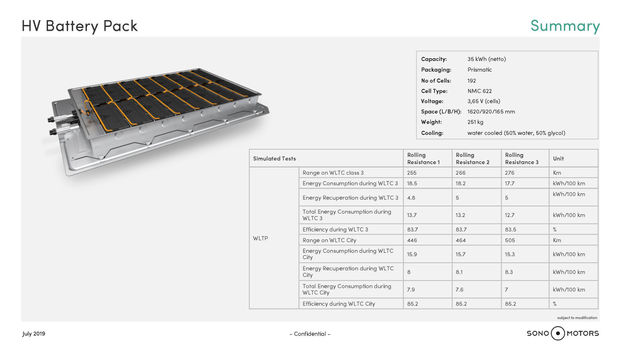 On the investment portal “Seedrs” a further financing round starts. There also two large investments are noted. A private investor wants to invest 500,000 euros, a fund company engaged in eco-investments 4.5 million euros. Upon request, Sono Motors informs that this investment will not be made through Seedrs, but through a direct investment.

Sono Motors expands its management. Thomas Hausch, who previously held management positions at Chrysler and Nissan, among others, is appointed “Chief Operations Officer”. In future, Isa Krupka will be responsible for communications as Chief Communications Officer. The announced sales launch at the end of 2019 remains

According to Sono Motors, the number of pre-orders reaches the 5,000 mark, with reservations from 33 countries

According to Sono, the automotive supplier ElringKlinger is to take over production of the drive battery. ElringKlinger to take over battery production as a supplier

Sono Motors announces equipment details. The Sion is to come exclusively in black, achieving at least 4 stars in the Euro NCAP crash test. Rear view camera, cruise control, seat heating and an optional trailer hitch will be included. Sales will continue to be announced for the end of 2019.

Sono Motors announces the start of series development of the Sion

Sono will hold a press event to present the two prototypes to invited journalists. A real test drive is not possible: The vehicles can be driven in circles on the tartan track of the Munich Olympic Stadium, opening the hood is not allowed. Sono-Motors will then tour Germany with the vehicles to give interested parties the opportunity to take test drives. These will not take place on public roads, but on closed off industrial areas, e.g. the parking lot of a wholesale market. From these test drive events, further pre-orders of the Sono Sion will be won.

The announced price including the battery is now 20,000 euros, while the low-range model for 12,000 euros has been “too little in demand”. 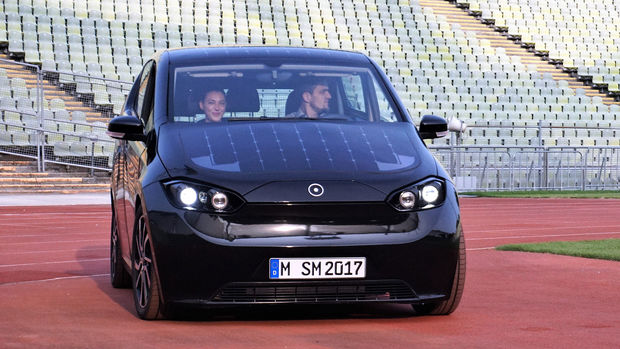 Unusual terrain: Sono Motors shows the prototypes on the tartan track of the Munich Olympic Stadium

In a first show event, Sono Motors presents one of the two models in a static presentation to the funding supporters. Sono Motors announces the participation of “several medium-sized investors”, but does not disclose the amount of the respective commitment.

Financed by the crowdfunding campaign, two prototypes with numerous components that are recognizably derived from the BMW i3 are being built at an external development company.

Within the scope of a first crowdfunding campaign on the “Indiegogo” platform, the founders will collect around 550,000 Euros, the majority of the approximately 1,700 supporters will choose to pre-order for a fee of 100 Euros. The Sion is announced as an “urban” version for 12,000 euros (without battery). The first announced delivery date: end of 2019. In early design sketches, the Sono Sion resembles the first Mercedes A-class. In addition to the promised 7.5 square meters of solar cells, which are housed in the body paneling, two further features are causing a stir: A moss “bed” housed in the dashboard as an air purifier and the announcement that the Sion will revolutionize workshop work. Customers will be able to do small jobs themselves with the help of a free workshop manual, produce spare parts themselves with a 3D printer, or switch to any independent workshop for larger jobs – all workshop documents will be made freely available on the Web.

The Munich-based electric car start-up Sono Motors launched in 2016 with an ambitious plan. Financed by so-called crowd funding, the Sono Sion is to be launched on the market with integrated solar cells. At the turn of the year 2019/2020 the company was threatened with closure. This seems to have been averted in the meantime: After several delays, series production has been announced for 2022.