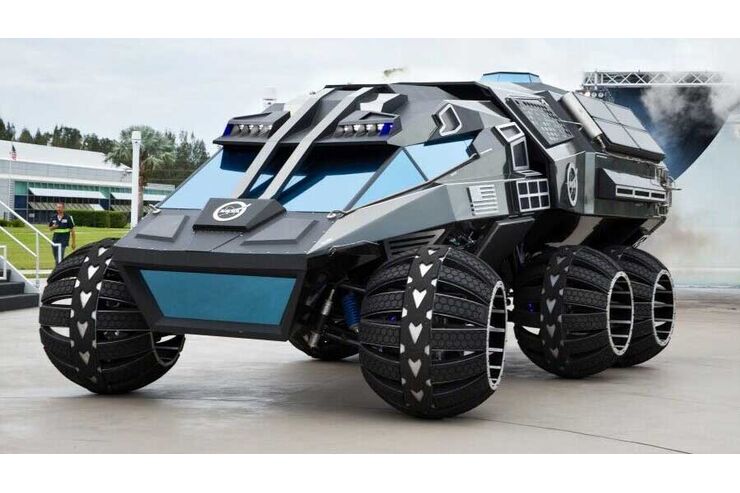 A Nasa start-up has designed a tire made of a wire mesh for future extraterrestrial mission vehicles. It is currently being further developed for use on Earth. Let’s take a look at the future of car tires.

The car as we know it is basically a collection of technical compromises. A prominent example: the reciprocating piston engine primarily generates an oscillating motion, which is only then inefficiently converted into a rotary motion. Wankel was on the trail of this. But: a constantly changing compression chamber is a disadvantage in terms of compression and scavenging losses. Another example: The pneumatic tire is in principle the oldest compromise in terms of mobility. Rubber in itself is super, but the air in the tire is a 130-year-old concession to the lack of roads and driving comfort at that time.

Nasa develops tires made of wire

Apparently, Nasa is still planning to colonize the moon and Mars. Where else would the contract to Nasa-affiliated startup “The Smart Tire Company” to develop novel tires capable of carrying large loads on other planets or satellites come from. Using pneumatic tires in a vacuum is out of the question. Existing designs from the 1970s of Goodyear’s lunar vehicles and also the 2009 collaboration with Michelin with rubber tires in space seem out of the question. So Nasa is having something new developed.

The requirements: puncture-proof, resistant, suitable for high loads. The result: an airless tire made of metal. Now this is not a complete novelty. But the space tire also offers ride comfort. Self-damping comes via the wire mesh made of a flexible, high-strength nickel-titanium alloy (Nitinol). The high-tech material has a memory, so it always forms back into its original position and therefore does not need air. This rules out the flat tire. Unfortunately, the current Mars rovers often suffer from flat tires in the figurative sense: Their wheels are made of aluminum, have no cushioning or suspension, and are therefore susceptible to damage. The Smart Tire solves the problem there and on Earth: Where there’s no air in, there can’t be any out.

Smart on the road

The Smart Tire Company is cooperating with the Californian racing bike specialist Felt, among others. Together, they want to bring the principle from space to the road. By bicycle. Here, racing cyclists are plagued by punctures and the weight of additional tubes or coats. The new type of tire based on the space tire has been christened Metl and is already being tested on the road. The main advantages: Lifetime durability, never another flat tire, high ride comfort due to permanent optimal tire “pressure”. Mounted on a normal rim. 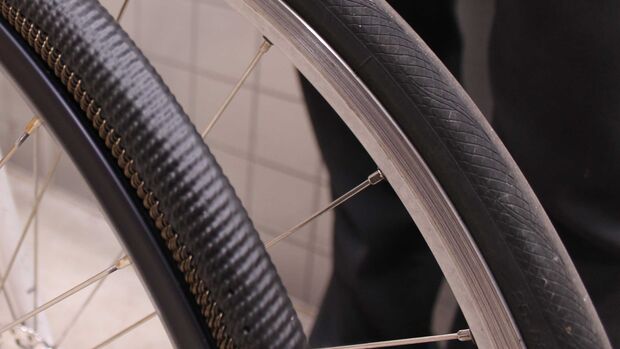 For road use, however, the braid gets another layer of rubber and polyurethane, for more grip – or any grip at all.

The thing with grip

Anyone who has dragged a piece of metal over the road knows that the material offers little static friction, so it doesn’t build up any grip. The smart tire for the moon and Mars doesn’t have this problem, because it simply doesn’t travel over roads there, but over dust, stone and sand. The Metl on the racing bike and transferred also on the car still needs a coating with a grippy material on earth. The Smart Tire Company plans to coat the Nitinol braid with a mixture of rubber and polyurethane for earth use, the space metal should not touch the earth.

Although Smart Tire argues that this combination will produce less tire wear and scrap tires, the mixture of rubber and polyurethane (PU) will put a lot of stress on the recycling of tires, which is in its infancy, since PU requires completely different forms of recycling than rubber. The current main production of PU from petroleum also puts question marks behind sustainability. If today’s petroleum-based alcohol were made from sugar tomorrow, things would look completely different. And a permanent bond between rubber and metal has long been the holy grail in car tire production and a highly guarded secret. 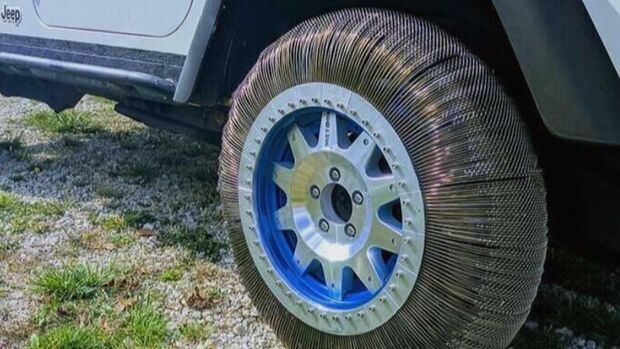 For use on cars, however, the tire must have another important property: It must be able to transmit lateral forces without collapsing, otherwise cornering will be difficult.

And on the car?

Smart Tire plans to transfer the development from Mars via the bicycle to the car. This is logical in terms of sustainability: According to tire manufacturer Michelin, a good 200 million tires are replaced every year because of punctures, and this happens long before they are actually worn out. A tire that can’t have punctures is an asset here. The problem with cars is that high engine, steering and centrifugal forces act on the tire much more intensively than on a Mars rover or a bicycle. The tire’s lateral stability and lateral steering forces are the challenge for concepts like the Smart Company’s; behavior in wet conditions or expansion due to centrifugal forces at high speeds are also hurdles. Legislative barriers such as the German registration regulations, which currently require pneumatic tires for vehicles over 25 km/h, aside. Established tire manufacturers have been on the trail of the airless tire itself for over 20 years.

Tires without air have been the dream of tire manufacturers since Goodyear, Dunlop and the Michelin brothers. The air comes 130 years ago in the tire. It should give the vehicles more comfort. At the same time, manufacturers began to solve the problem of air loss with all kinds of puncture protection layers such as leather or wanted to mount solid rubber wheels on springy rims. However, the air variant has prevailed. With the shortcoming of puncture resistance: Then and now, nails and screws are only the representatives for countless ways to deflate a tire unplanned. 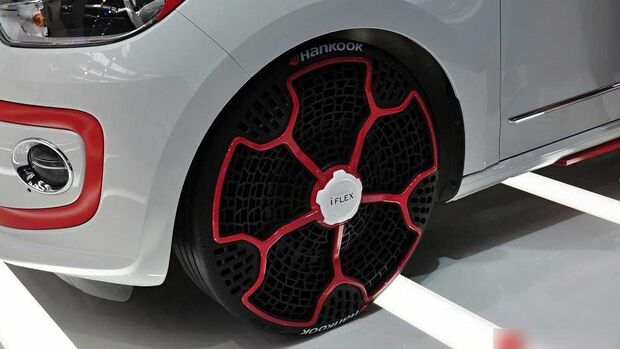 However, Hankook relies on a load-bearing honeycomb structure instead of flexible struts like Michelin or Bridgestone.

Today: Michelin has been working with the Tweel on light construction equipment for over 20 years. It’s an airless tire with a load-bearing structure built on rubber bars that absorbs shock. However, it doesn’t do curves and lateral guidance so well, but it doesn’t have to on small excavators and ride-on mowers. The principle is to be marketable as Uptis on passenger cars from 2024. Bridgestone’s airless tire has a similar design. It also comes without air, but with a flexible construction of bars. Hankook is tackling the issue with the IFlex, which has a honeycomb structure. Rim manufacturer Maxion experimented with the flexible Acorus rim in 2018. Market maturity – if at all – with all ideas: It’s still taking time.

Yes, comfort and stability of pneumatic tires are unmatched.

No, new methods will soon replace the compromise pneumatic tire.

The issue of air in tires is a difficult one. It is a compromise, but after 130 years it works excellently. Until a nail, screw, point, stone or blade ends the good interaction. Of course tires can be repaired, but the basic problem of punctures remains.

The dream of the tire with the comfort of pneumatic tires only without air or other overpressure, is as old as the tire itself. A – tangible – solution does not exist today.

The Smart Tire Company’s clever idea also has more question marks than exclamation points behind it. The use of Nitinol as the main resource adds a significant cost factor. The material is enormously expensive to produce and is now used for stents or artificial heart valves. So it would be better to put it to life-saving uses first.

The tire manufacturers’ other ideas for getting the air out of the tire all look spacy, but no car will be rolling on them tomorrow. Besides all the technical challenges, the restrictions of German law are still the least of them.

Letting the air out of the tire permanently and in a planned manner remains much more difficult than doing it by accident.