Are combustion engines outdated? Not when it comes to high continuous output and efficiency. Audi’s new eight-cylinder development for 2021 shows that they can be further optimized by efficiency-enhancing technologies.

The stagnation in the development of combustion engines in the past year 2020 is clearly visible. The number of new engines introduced is significantly lower than in previous years, and not only because of the ongoing Covid 19 pandemic. The reason is mostly to be found in the massive redistribution of investments, in which, in favor of electric and alternative drive concepts, the development of new combustion engines has taken a bit of a back seat. Automakers are under pressure here: CO2 emissions are to be reduced by 37.5 percent by 2030. The fastest way to achieve this, at least according to general understanding, is to switch to electromobility – the further development of new technologies related to the internal combustion engine is being put on the back burner for the time being. Participants at the Powertrain Expert Forum, a conference for automotive experts, predicted a 50 percent drop in sales of pure combustion engines by 2030 compared with 2020. But that is only half the truth. Because at the same time, according to the unsurprising forecast, the share of electrified and hybridized combustion engines will increase.By ten years from now, experts say, the share of vehicles with pure electric drive (BEV), together with plug-in hybrids (PHEV), will rise to around 70%.

EA 825 is the name of the new gasoline engine generation developed by Audi together with Porsche. While the four-liter eight-cylinder is already installed at the group’s sister companies Bentley and Porsche, the TFSI is initially only intended for the A8 at Audizun.

The new V8 TFSI from Audi will be used in the elegant A8, among other models.

The output of the engine, which has a stroke and bore of 86 millimeters, is 338kW at 5500 rpm. The V-90° engine delivers its maximum torque of a remarkable 660 Nm between 1850 and 4500 rpm. Its compression ratio of 11:1 is relatively high for a turbocharged engine. The Audi eight-cylinder engine is classified in emissions class Euro 6.

The cylinder block is made of the aluminum alloy AlSi9Cu3 and is produced by sand casting. After the block has cooled, the cylinder tracks are roughened with a milling cutter and then an iron layer is applied to the track by atmospheric plasma spraying to increase wear resistance.

In atmospheric plasma spraying APS (picture exemplary), an arc is ignited between the anode as the positive pole and the cathode as the negative pole in order to ionize the gas flowing through. The iron powder introduced into the plasma flame melts and is propelled at a speed of 450 m/s onto the cylinder bore.

The forged crankshaft has five bearings. As the crankshaft main bearings of modern hybrid and start-stop engines are subjected to particular loads, Audi installs a three-layer bearing to increase stability and reduce frictional resistance. The steel backing of the Irox2 bearing provides the necessary stability. 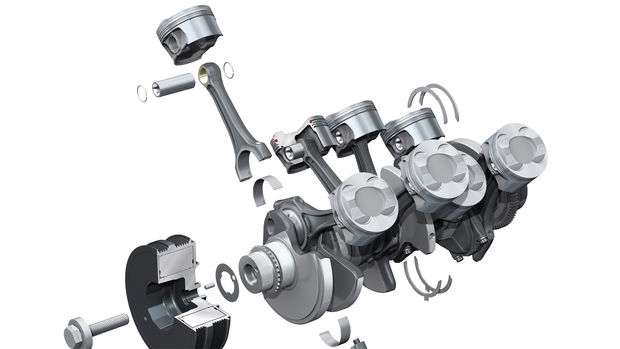 The second layer is a soft-metal sliding substrate. Applied to this is a polymer resin coating made of polyamide imide, a thermally stable carbon-based polymer. In contrast to Irox1, the manufacturer Federal-Mogul Powertrain does not add silicon carbide particles in favor of a higher proportion of solid lubricants.

The trapezoidal connecting rods of the eight-cylinder engine are made of high-strength steel. Manufactured as a one-piece component, the connecting rod is then broken into two parts. The “cracking” process achieves a high degree of accuracy of fit between the connecting rod shank and bearing cap when the two fractured surfaces are bolted together.

The assembled camshafts consist of the splined basic shaft 1, the cam pieces 6 that can be displaced for cylinder deactivation, the firmly locked cam pieces 7, the sensor wheel 8 for the position of the camshaft and the drive 5 for the high-pressure fuel pump. 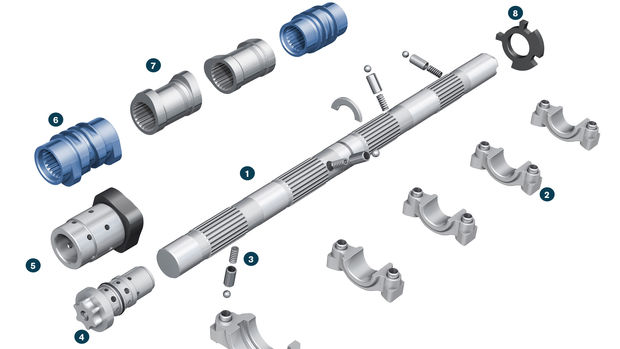 The engine is equipped with the AVS system developed by Audi. With this system, two cylinders per cylinder bank can be switched to “zero stroke” at low engine load by shifting the cam pieces. Cylinders 2, 3, 5, and 8 are deactivated on the intake and exhaust sides, so that the cylinders with firing order 1, 7, 6, and 4 take over propulsion of the vehicle. Thanks to the active engine mounts, the switching is barely perceptible to the vehicle occupants.

The two twin-scroll turbochargers located in the V of the engine play a significant role in the high engine output of the eight-cylinder unit. A swirl element located in the air intake manifold calms the air flow before it enters the charger to improve acoustics. 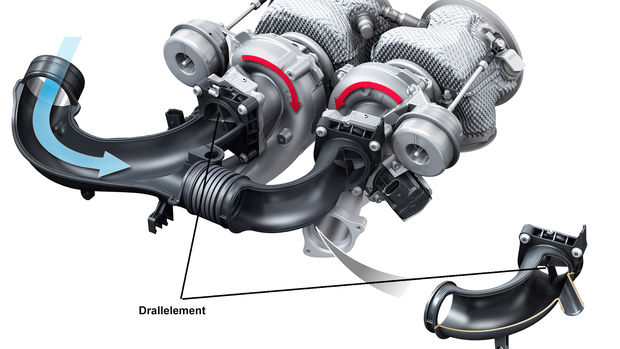 To improve acoustics, the swirl element calms the airflow before it enters the superchargers

However, before the compressed air enters the intercoolers, it passes through pulsation dampers that suppress the typical flow noise of superchargers. A connecting tube that couples both outputs of the turbocharger dampens out-of-phase pressure oscillations and the resulting compressor pumping.

You can find out more about this engine, insider automotive knowledge, plus car, motorcycle and truck technology in detail on our new website:

On the clearly structured web pages you will find an extensive range of technology topics from the world of motor vehicles. In-depth information for everyone who wants to know exactly what’s going on, and must-reads for automotive professionals from trainees to engineers. Click your way through!