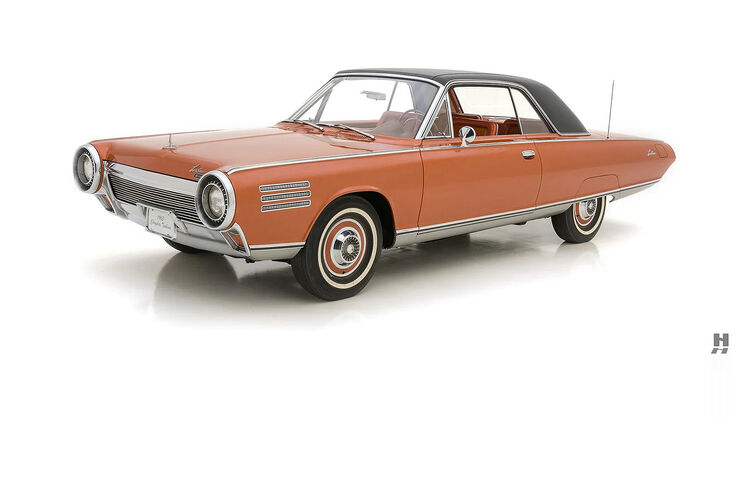 Since the early 1950s, Chrysler had been conducting tests with prototypes powered by a gas turbine. At the time, many manufacturers regarded the gas turbine as the car engine of the future: Fiat presented the Turbina in 1954, General Motors built the Firebird versions I (1953), II (1956) and III (1959), vehicles that visually resembled airplanes, Renault drove the Étoile Filante through a salt desert in 1954, and Rover was already involved with the JET1 in 1949/50 and the Rover-BRM from 1963 to 1965. All of these vehicles never made it past the prototype stage.

Chrysler presented a gas turbine-powered Plymouth sports coupe as an experimental vehicle in 1954. By the early 1960s, Chrysler had a handle on materials issues and manufacturing problems. The materials were resilient heat-resistant metals that were cheap to procure and easy to machine. Between 1963 and 1964, the manufacturer equipped a small series of 55 vehicles with the now fourth generation of its drive turbine and made them available to selected test drivers for evaluation. One of these vehicles has now gone to an unknown buyer – only two are in private hands worldwide.

The instruments and the front end of the center console are also said to be reminiscent of turbines.

The turbine reached its maximum output of 131 hp (96 kilowatts) at 36,000 rpm – with a maximum of 45,700 rpm. By way of comparison, internal combustion engines for passenger cars that rev at 7,000 rpm are already considered high-revving engines. The upper end of the reciprocating engine speed range for passenger cars is currently marked by hypercars such as the Mercedes-AMG One at 11,000 rpm and the Aston Martin Valkyrie and Gordon Murray T.50 at 11,100 rpm each – so they don’t even reach a quarter of the maximum speed of the Chrysler turbine. 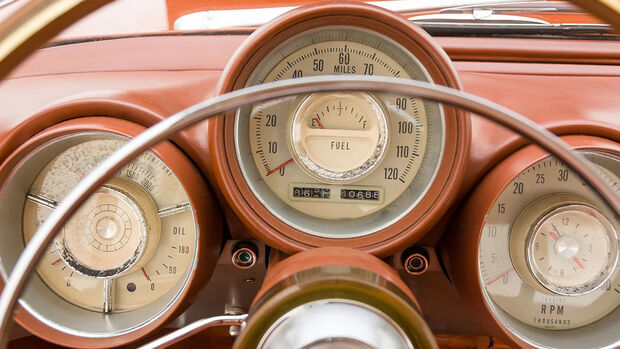 On the right is the display for the turbine revolutions: The engine spun up to 45,700 rpm.

The maximum torque was a mighty 576 Newton meters – but the turbine car still needed twelve seconds to sprint from zero to 100 km/h. The turbocharger was a single-stage centrifugal compressor. The turbine operated with a single-stage centrifugal compressor, a combustion chamber and a two-stage axial turbine. The first stage drove the compressor, while the second stage was coupled to a conventional TorqueFlite three-speed automatic, albeit without a torque converter. For fuel, the turbine tolerated almost any liquid energy source: kerosene, the aircraft fuel JP-4 (65 percent gasoline, 35 percent kerosene) gasoline, diesel and vegetable oil were no problem. The then president of Mexico, Adolfo López Mateos, even successfully ran his Turbine Car on tequila. However, Chrysler warned against the use of leaded gasoline – this could weaken the turbine due to lead deposits. The most readily available fuel at the time was therefore taboo for the Turbine Car. Most drivers therefore used diesel or heating oil as fuel. 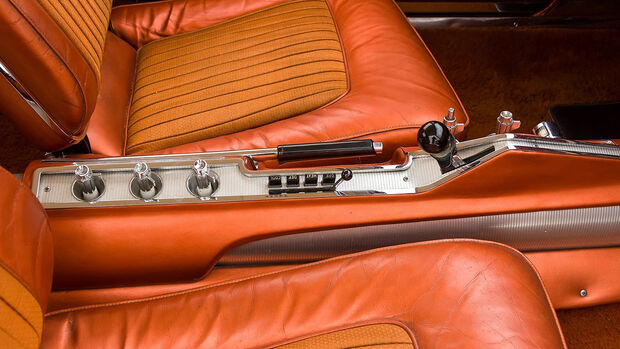 Four buttons and a small lever: The controls for the air conditioning system are located in the center console.

No coolant circuit, no ignition distributor

Compared to a reciprocating engine, the turbine had only about 60 moving parts instead of about 300. It also lacked an ignition distributor, breaker contacts and a coolant circuit. There was only one spark plug for starting and the oil circuit did not have to cope with combustion residues, which made oil changes unnecessary. The turbine exhaust, even without the use of a catalyst, contained no carbon monoxide, no hydrocarbons and no soot (unburned carbon). The problem, however, was that the turbine produced very high levels of nitrogen oxides (NOx). 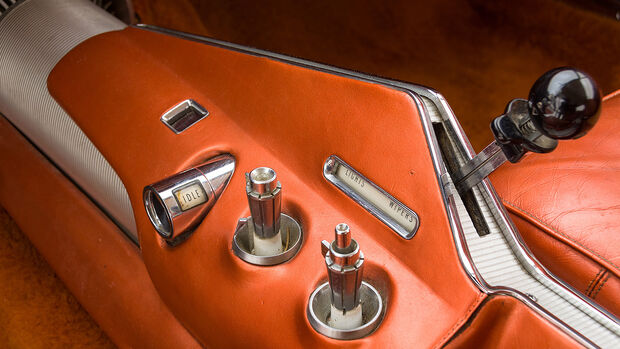 The gear selector lever is in idle – Chrysler used its TorqueFlite three-speed automatic without a torque converter in the Turbine Car. The buttons for lights and windshield wipers are also located in the center console.

Chrysler designer Elwood Engel created the Turbine Car as a two-door hardtop. Engel had previously worked as a Ford designer for 14 years and adopted some of his earlier Ford designs directly for the new Turbine car. In particular, the distinctive rear end with its large round taillights came almost one-to-one from Ford’s 1956 Galaxia styling study – and it was a good fit for a turbine-powered vehicle of the future. Inside, there were power windows and the blue-green shimmering instruments glowed just as electroluminescent (a solid emits electromagnetic radiation in the form of light when an electrical voltage is applied) as the display strip stretching across the entire dashboard. The steering and brakes were power-assisted. 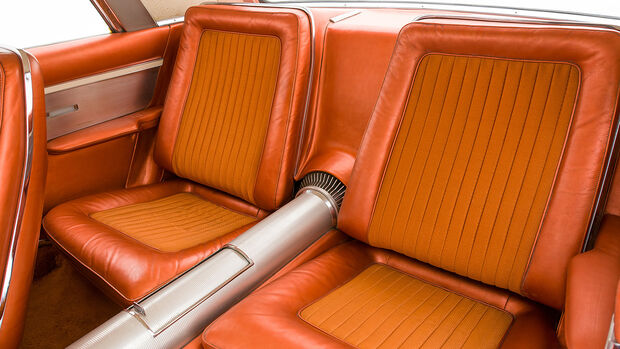 In the rear, there are two individual seats – between them runs the center console that extends to the rear, the end of which again visually picks up the turbine theme.

Engel even used the turbine theme for the wheels: The center of the hubcaps is modeled on turbine blades. The red-brown paint was initially called Frostfire Metallic and was later available on other Chrysler models under the name Turbine Bronze. The roof was tucked under black vinyl, and inside again numerous turbine blade designs pointed to the car’s powertrain. The seats were upholstered in bronze-colored English calfskin, and the feet of the maximum four occupants rested on plush bronze-colored carpets. 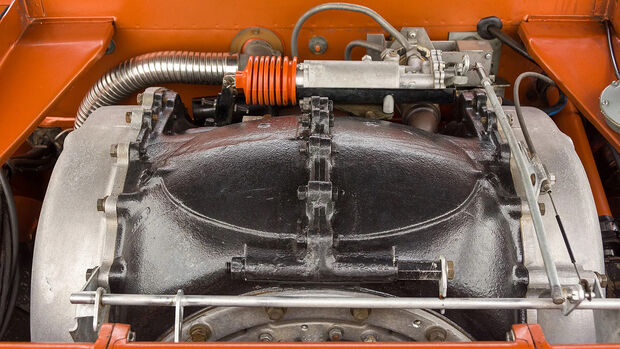 The turbine sits in this cast housing, which looks a bit like archaic mechanical engineering.

Italian design firm Ghia made the bodies and interiors, shipped them to Detroit, where Chrysler installed the turbine, transmission and electrical components. This resulted in five prototypes and 50 test vehicles. 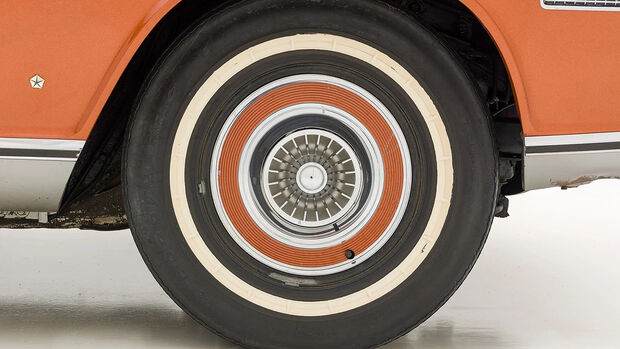 It’s worth taking a closer look: The white stripes of the whitewall tires are again embossed with small stripes that visually continue the turbine theme.

30,000 applicants wanted to test drive the Turbine Car. Chrysler selected 203 interested parties, each of whom was allowed to try out the car of the future for three months. At the end of the tests, engineers noted what was considered a low failure rate of four percent over the entire test period. The problems were said to be delayed throttle response and high exhaust outlet temperatures at idle. In addition, the starter alternator did not work at high altitudes. Chrysler fixed the problems over the course of the tests – operational readiness increased from 96 to 99 percent. But lasting problems included delayed acceleration and, at 16 to 17 liters of fuel per 100 kilometers, high fuel consumption. Customers liked the vibration-free running, but thought the turbine sounded like a vacuum cleaner. Anyone who drives in the current vehicle world probably feels about the technology carrier from the 1960s like our editor-in-chief Jochen Knecht, who had the opportunity to test a Turbine Car from Chrysler’s factory inventory. His conclusion: “It’s a lurching, ponderous ride that’s hard to control and very noisy.” 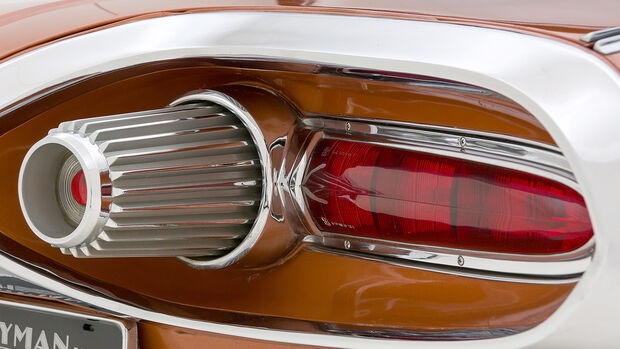 The far-rear reversing lights are a distinguishing feature of the Chrysler Turbine Car.

Scrapped to save on customs duties

After the test program, Chrysler immediately scrapped 46 Turbine Cars – to avoid the high customs duties that would have been due for importing the bodies from Italy. Six examples went to museums after the manufacturer disabled the turbines by removing the fan assemblies. Chrysler kept the remaining three examples for itself. Later, then-Chrysler CEO Robert Lutz shipped the missing fan assembly to a private museum owner so he could put his example’s turbine back into service.

One of the three Turbine Cars in Chrysler’s inventory has belonged to talk show host and car enthusiast Jay Leno since 2009. The ex-talk show host seems to like turbines: together with General Motors, turbine manufacturer Honeywell, aluminum specialist Alcoa and chemical group BASF, he designed the EcoJet concept car in 2006, and he also presented a motorcycle with a turbine drive. The second Turbine Car, now sold by the Hyman dealership in St. Louis, Missouri, is the one that has since been restored to working order. Chrysler originally donated it to the Harrah Collection in Reno, which then bought it from Domino’s Pizza founder Tom Monaghan. The latter sold the car to collector Frank Kleptz, who died in 2010. 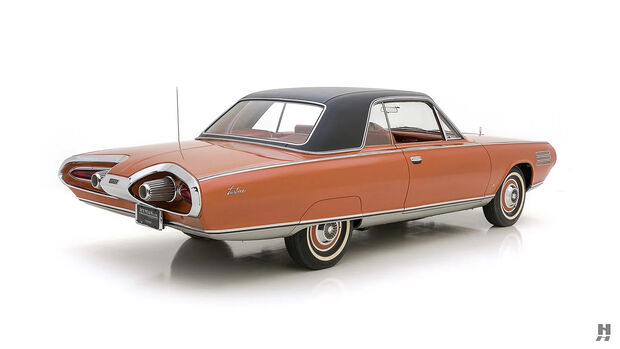 Chrysler built 55 examples of the Turbine Car, and today nine cars still exist – Chrysler destroyed the other vehicles to save on import duties for the bodies.

Jay Leno is not the buyer

Hyman is not sharing the identity of the Turbine Car’s buyer, nor the purchase amount, which is likely to be immense given the vehicle’s rarity. The only thing the tight-lipped dealer confirms: Jay Leno is not also the buyer of the second Turbine Car in working order and in private hands.

Yes, the problems with fuel consumption and nitrogen oxides would certainly have been solved by the engineers.

No, then the consumption of fossil fuels would be much higher to this day than it already is.

With the Turbine Car, Chrysler developed a sensational car for the late 1960s. Visually a tinny faith in the future, the turbine powertrain offered many advantages with its freedom from maintenance and its tolerance of virtually all liquid fuels. However, Chrysler was unable to come to grips with the immensely high fuel consumption and the likewise very high nitrogen oxide emissions. As a result, the turbine car project never got beyond the test phase, which in the end resulted in only a few prototypes being received.

The Turbine Car now being sold is one of two that are in private hands – and, unlike the museum specimens, it is drivable. That’s why its price is likely to be extremely high, especially since American collectors find such a car extremely desirable. The other two drivable models belong to Chrysler – and the car manufacturer still seems to have the spare parts that could be used to make the five cars from the museums drivable again.

Chrysler continued to experiment with ever more advanced turbine engines until the late 1970s. At that time, however, the manufacturer ran into serious financial difficulties – to save the group, the U.S. government took over a government guarantee. One condition of the guarantee was that Chrysler stop developing turbine engines. The ban immediately led to the emergence of conspiracy theories.

To this day, the company has not published how much the turbine program has cost it.