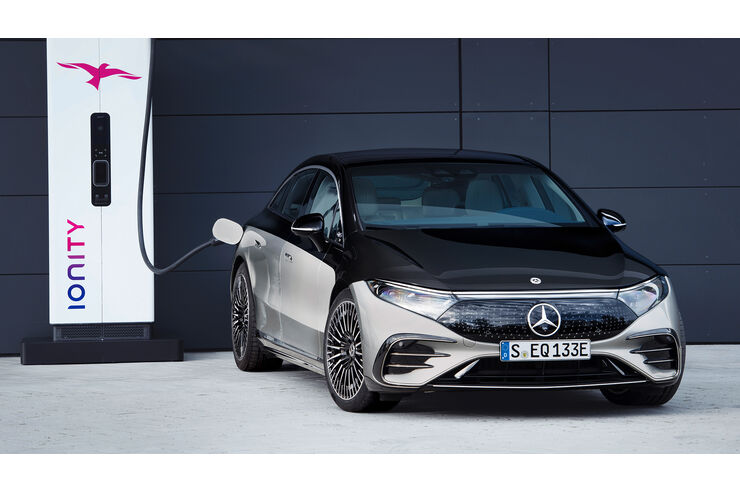 With its Charging Index, the P3 Group determines the true charging speeds of electric cars. As last year, the charging champion comes from Swabia. Last year’s winner, however, drops to fourth place.

Even before it is officially launched, the Mercedes EQS takes its first victory – in the P3 Group’s Charging Index (P3CI). The Stuttgart-based consultancy compared the true charging speed of electric cars for the second time after 2020. In the current ranking, it sees the Mercedes EQS 580 in front: The electrically powered luxury sedan achieves a P3CI of 0.88 and 266 kilometers, respectively, and is thus not far from the ideal value of 1.0 and 300 kilometers, respectively.

The index is calculated by P3 determining the quotient of the real range recharged in a period of 20 minutes to a target value of 300 kilometers. The closer to the maximum, the faster the charging speed. The strength of the EQS value becomes clear when we look at the following ranks: with 0.74 or 221 kilometers, the Tesla Model 3 in the Long Range version is only just ahead of the VW ID.3 Pro S (0.73 or 220 kilometers) and last year’s winner Porsche Taycan Turbo S, whose value of 0.72 or 217 kilometers this year is only enough for fourth place.

Only fourth despite 800-volt architecture

The fact that the Zuffenhausen car has fallen behind is quite surprising. After all, it is the only electric car mentioned here with an 800-volt electrical system architecture; 400 volts are sufficient for the Mercedes. Porsche also promises a maximum charging power of 270 kilowatts, while the Mercedes is content with a maximum of 200 kilowatts. But the top-of-the-line Taycan regulates its maximum possible charging power sharply downwards after an initial mega-energy boost, while the curve in the EQS is much flatter. 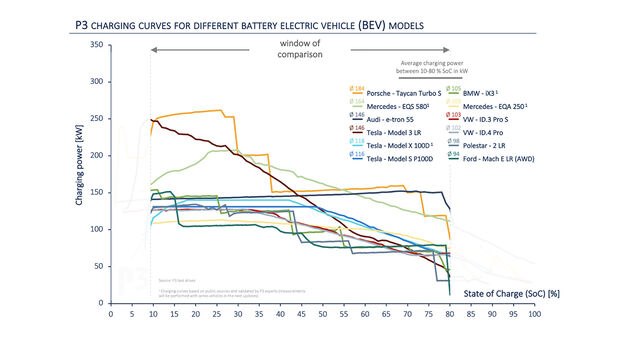 The fact that the thick on-board network of the Taycan Turbo S nevertheless brings advantages is shown by the fact that it clearly leads in the “average charging power” category. With 184 kilowatts in the so-called charging window, which considers the charging power in the range between ten and 80 percent of the battery capacity, it is clearly ahead of the Mercedes (164 kW). It is followed by the Audi E-Tron Quattro 55 and the Tesla Model 3 Long Range with 146 kW each.

In its evaluation, the P3 Group also looks at a phenomenon that has already proven to be a permanent annoyance with combustion vehicles: the discrepancy between the standard consumption value and the actual energy consumption. For this evaluation, the consulting company uses the WLTP value on the one hand and the actual power consumption according to the ADAC Ecotest on the other. By exceeding its standard specification of 15.9 kilowatt hours per 100 kilometers by only nine percent in reality, the VW ID.3 Pro S clearly wins this category. It is followed by the Mercedes EQA 250 and the Tesla Model 3 Long Range on the other podium places. 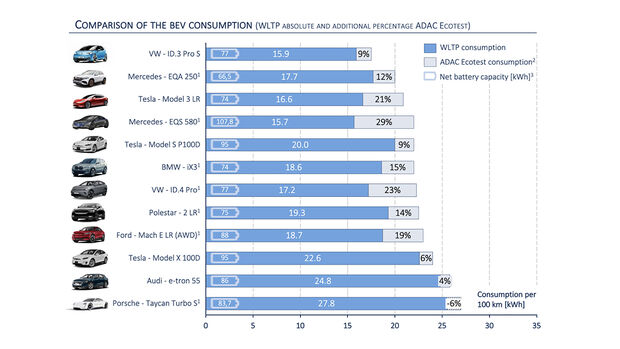 The best P3CI performers cannot shine here. The Mercedes EQS 580 still comes in fourth place, but consumes a whopping 29 percent more than promised by the factory (15.7 kWh/100 km) in the ADAC Eco test. Although it exceeds the standard value by only six percent, the Porsche Taycan Turbo S comes last in this ranking; but a 911 Turbo S also consumes significantly more fuel than a Golf. The Tesla Model X 100D and Audi E-Tron Quattro 55 electric SUVs are in third and penultimate place, although their real-world consumption is also barely above the WLTP value.

No, I’ll wait and see and stick with the combustion engine.

Yes, now is the time.

The P3 Charging Index provides interesting insights in terms of the actual charging speed of electric cars. Because it shows: Maximum peak power does not have to mean that this car also refuels electricity the fastest in reality. But the P3CI is only a snapshot: New electric cars will soon be launched on the market in the form of the Hyundai Ioniq 5, Kia EV6 and Audi E-Tron GT, which also have an 800-volt on-board architecture. And then the cards are likely to be completely reshuffled.