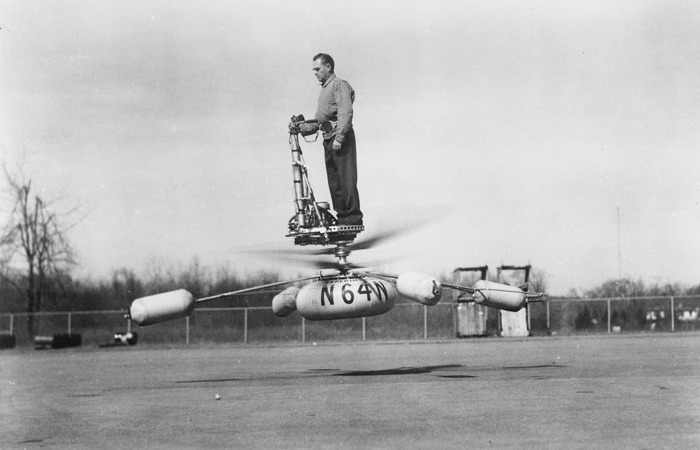 In the middle of the twentieth century, when the arms race was in full swing, both superpowers developed a variety of concepts to outrun their ideological rival. And often they were the result not only of practical necessity or relevance, but also of the imagination of their authors. So it is not surprising that American engineers once designed a single-seat helicopter that could be piloted by almost anyone. However, the novelty of the concept did not give it a ticket to life – the project was quickly shut down.

The history of this unusual vehicle began in the mid-twentieth century, when Charles H. Zimmerman of the National Advisory Committee on Aeronautics, better known as NACA, developed an unconventional rotary-wing control system. Its essence was that by placing the bearing propellers on the bottom of the machine, the pilot was able to control it by shifting his weight alone, and to maintain a stable position by the action of his natural reflexes. This phenomenon is known as kinesthetic control, and you can see it in everyday life, for example, when riding a bicycle.

The main peculiarity of this concept is that not only a professional pilot, but practically any person can control such an airplane, since in this case, no special training is required. The results of the first tests of the NACA in the development of this project demonstrated the viability of the idea, so a number of aviation construction companies received an order to build the appropriate machine, among them was de Lackner Helicopters.

Eventually, the specialists of de Lackner Helicopters proposed a concept of a single-seat flying platform, which was called “DH-4”. The apparatus was a cross-shaped frame on which stood the pilot. A harness system secured not only a single crewman to the platform, but also the propulsion system, which was an outboard engine made by Mercury Marine. The machine also had a chassis and even a special float in the middle that added amphibious functionality.

It was planned that if it went into mass production, the DH-4 would also have the ability to carry up to 120 pounds, 54 kilograms of cargo, or it could be fitted with an auxiliary 19-liter fuel tank – which would increase the range to 80 kilometers. When US Army specialists began testing the prototype, it was first designated YHO-2, and later renamed HZ-1 “Aerocycle”, and the functionality was marked “personal helicopter”.

The single-seat aerocycle made its first tethered test flight on November 22, 1954, and its first free flight in January 1955. In all, the first test phase consisted of 160 flights, and the results of these tests were quite promising. So de Lackner Helicopters received an order for a dozen copies of this type of helicopter. At the time, the “personal helicopter” was supposed to be used for reconnaissance as well as transportation, and in about the same sense as the cavalry was used in the past.

In 1956, the test program resumed and was moved to Fort Justice, Virginia. And there began to show all the shortcomings of the machine, which previously were not considered something critical. Thus, despite the fact that many testers claimed that one could learn to fly the HZ-1 Aerocycle in less than half an hour, piloting it was still more difficult than imagined. In addition, there were problems with the blades, which literally lifted and “collected” rocks and debris. It did not do without accidents: there were at least two, both because of the rotors, which rotated in different directions and simply put each other out of operation. The shortcomings revealed by the wind tunnel tests, but at the same time the impossibility of determining their cause became the last straw – the “personal helicopter” project was closed.