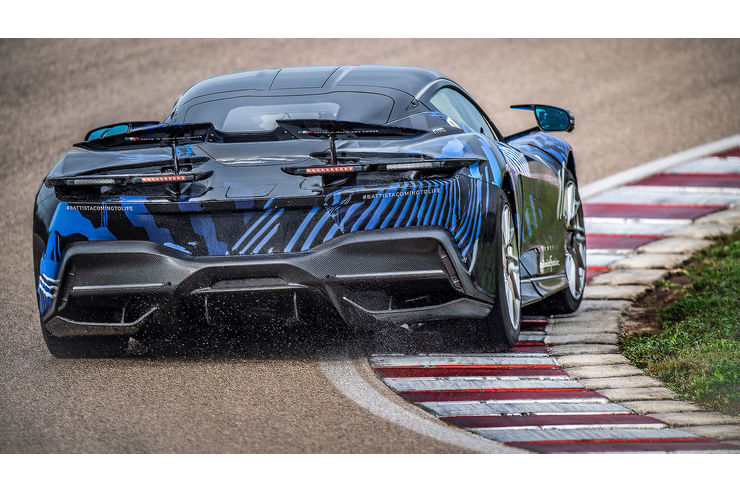 At its world premiere in Geneva, the Pininfarina Battista was on show in three variants. The Grigio Luserna Battista stood out with accents in satin blue on matte gray paint, complemented by anodized aluminum details. Unique, striking wheel design met a beige-on-black interior.

The second example showcased the Battista “Iconica by Automobili Pininfarina” design package. This Blu Iconica vehicle was closest to the traditional Pininfarina brand color among the three on display, with an interpretation of the Pininfarina Blue color. Several layers of paint were used to create a deep blue that represented a claim to offer electric performance in a luxurious overall package. Modifications to the roof and a visual connection of the hood and windshield through carbon fiber slats added a spectacular touch to the vehicle’s aesthetic. The front fender took up the lines of the rear flanks with its visual bisection above the LED light strip, making the overall appearance harmonious.

The third model entered with a paint finish in Bianco Sestriere and small color details that picked up on the design of historic Pininfarina vehicles. One of these design details was a red aluminum line that ran between the sill and door along the flanks and just in front of the front wheel, as well as framing the rear from the rear wheel arches. Red brake calipers and a dark chrome line above the window were otherwise the only trim elements.

Design changes even before market launch

Basically, the Battista design features flared wheel arches, a narrow passenger pulpit and a short front hood. An LED band extends across the entire front of the vehicle. Underneath, an apron with spoiler can be seen. The front hood appears in a fan shape and is aerodynamically optimized. The roof dome slopes slightly towards the rear, where a two-part wing with LED strip can be seen.

Following the latest wind tunnel simulations, Automobili Pininfarina has sharpened the design a little further. For example, the team led by design director Luca Borgogno redefined the front end. In future, for example, the Battista will do without the air intake slots next to the headlights, which in the previous version ran horizontally along the bumper. In addition, the side sections of the apron have been given a more pronounced shape. The exterior mirrors, which were already prominent before, now look even more extreme. Overall, according to the manufacturer, “the visual harmony between the front and rear” of the electric bolide increases. They also result in optimized aerodynamics, which goes hand in hand with a greater range: according to the latest WLTP data, the Battista should be able to travel up to 500 kilometers instead of just 450 on a full charge of its 120 kWh battery.

Inside, the driver grips a rectangular small sports steering wheel with a large baffle and looks at a central mini-display. To the right and left of the valance, screens facing the driver provide information. The dashboard has a curved appearance, and the two passengers sit on contoured sports seats with integrated headrests. The Battista is reminiscent of the legendary Pininfarina models Cisitalia, Modulo and Sintesi. 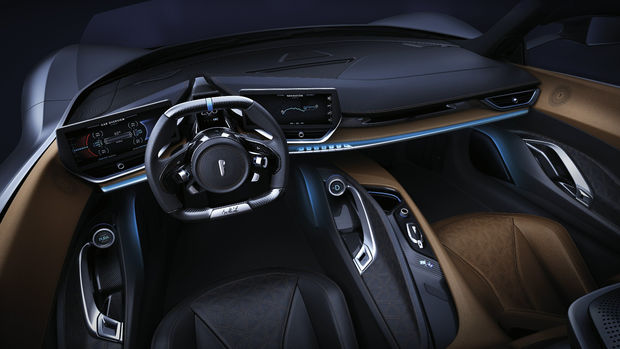 The cockpit of the PF0. To the right and left are two screens facing the driver for vehicle information.

The Pininfarina Battista already on the race track

The electric racer with carbon-fiber bodywork will probably weigh around 2.2 tons. Thanks to a maximum output of more than 1,900 hp and 2,300 Nm of torque from four motors, it should accelerate to 100 km/h in less than two seconds. It reaches the 300 km/h mark in less than twelve seconds, and the top speed is said to be in excess of 400 km/h. Beyond its performance, however, the Battista’s special feature is its four engines, each of which drives one wheel, which opens up completely new possibilities for torque vectoring but requires a correspondingly large amount of tuning work: “Distributing 2300 Newton meters over 12 to 13 centimeters of pedal travel in such a way that the car remains easily controllable and does what the driver imagines requires sensitivity. With the lightning-quick torque of the electric motors, you could even get all four wheels spinning at 200 km/h. Fortunately, the control speed of the e-drive is many times higher than that of combustion engines,” says chief developer René Wollmann, who worked on the SLS eCell during his time at AMG. 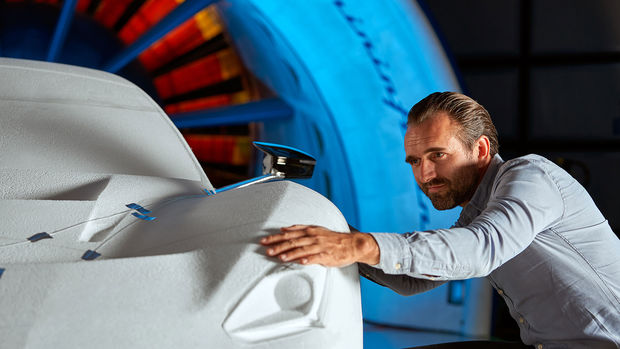 Wollmann says aerodynamics are particularly important. The Battista is supposed to be very streamlined for a sports car.

The Italians are calling for a price tag of between 1.75 and 2.2 million euros and are limiting the Battista to just 150 models worldwide – 50 each will go to the U.S., Europe and the Middle East. Despite the small number of units, the Italians want to complete a normal crash program and will actually drive a complete example of the expensive two-door to the wall to leave no doubt about the quality and seriousness of the project. The Battista will differ from the Rimac primarily in terms of its character. While the Croatian original is aimed at maximum performance and is also intended for the racetrack, the Battista is supposed to be the pleasure-bringing GT, where comfort, safety and drivability also meet the highest everyday demands. Following the covert unveiling at Pebble Beach, the Pininfarina team is convinced that demand for the electric racer will far outstrip supply. Deliveries are scheduled to begin before the end of 2020. 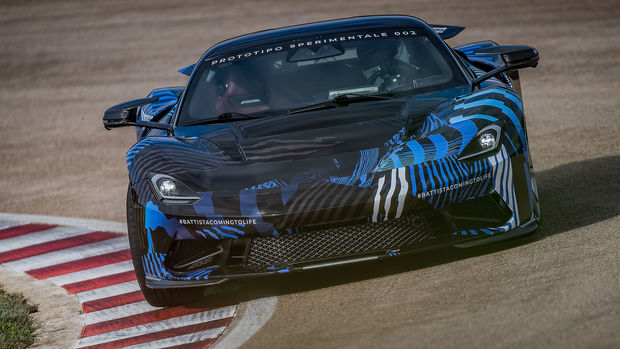 It is already clear, however, that the Battista aka PF0 will be followed by other luxury models with electric drives. At Monterey Car Week 2019, Pininfarina presented the Pura Vision design model to potential Battista buyers. Automobili Pininfarina is not yet revealing exactly what it is. Design chief Borgogno says only that it is an “incomparable vehicle” “designed for electric performance with thrills” that combines classic Pininfarina design features. He also held out the prospect of a luxury SUV to the invited guests in California.

Rimac will supply the electric drive and batteries

Rimac will supply the electric drive and the batteries. Incidentally, the Croatians are using cells from Samsung. The secret of the battery’s enormous performance lies primarily in the cooling system, which should allow charging powers beyond 300 kW at peak. For the customer, a permanent average of 180 kW should be realistic.

René Wollmann puts the proportion of the Battista’s parts that are either Pininfarina’s own or heavily modified compared to Rimac’s at a total of 70 percent. Rimac not only made a name for itself with ultra-powerful electric supercars, but also made headlines when Porsche announced a stake in Rimac. At the same time, according to rumors, the Croatian company could take over the Bugatti brand from Volkswagen.

Mate Rimac, who is only 30 years old, explains: “We are very much looking forward to this challenge. The Rimac values of technology, innovation and performance, combined with the tradition, history and Italian design of Automobili Pininfarina, create a perfect synergy for an exciting new supercar. This partnership is a game changer for both companies and we look forward to working together to breathe life into this incredible vehicle.”

He and his team are likely to fly to Munich more often in the future. The Bavarian capital is home to Automobili Pininfarina’s headquarters, while the Battista is assembled at the company’s headquarters in Italy.

Sure thing. The incredible data speak for themselves, don’t they?

Surely not. It’s just one electric hypercar among many.

The head of the car division is former VW and Audi manager Michael Perschke. He was able to recruit additional personnel for the project of a new electric car brand. Dr. Christian Jung will be the technical director at Automobili Pininfarina. He was most recently senior director of electrical engineering and platform strategy at stumbling electric carmaker Faraday Future, previously in the employ of BMW and Porsche.

Dr. Peter Tutzer will become senior technical advisor. He brings experience in building sports cars, having worked at Porsche, Pagani and Bugatti before joining Pininfarina. Most recently, after a stint at Lotus, he held the role of chief technical officer at Thunder Power EV, an electric car start-up from Taiwan.

Nick Heidfeld is on board

Nick Heidfeld joins the team as a development driver. The former Formula 1 driver is with Pininfarina owner Mahindra as a driver in the electric Formula E. In addition to its expertise, Pininfarina is certainly likely to use its popularity to have a familiar brand face.

The Battista’s spectacular performance figures are, of course, due primarily to Rimac’s powertrain. But the orientation of the Italian two-seater is clearly different and requires a lot of tuning work, with which Pininfarina has acquired considerable expertise. And if it succeeds as it seems to, it would not be surprising if the small series were sold out in no time at all, despite the exorbitantly high price, although Rimac will soon have a technically related car from which the Battista also differs in its different design from a tradition-rich house.