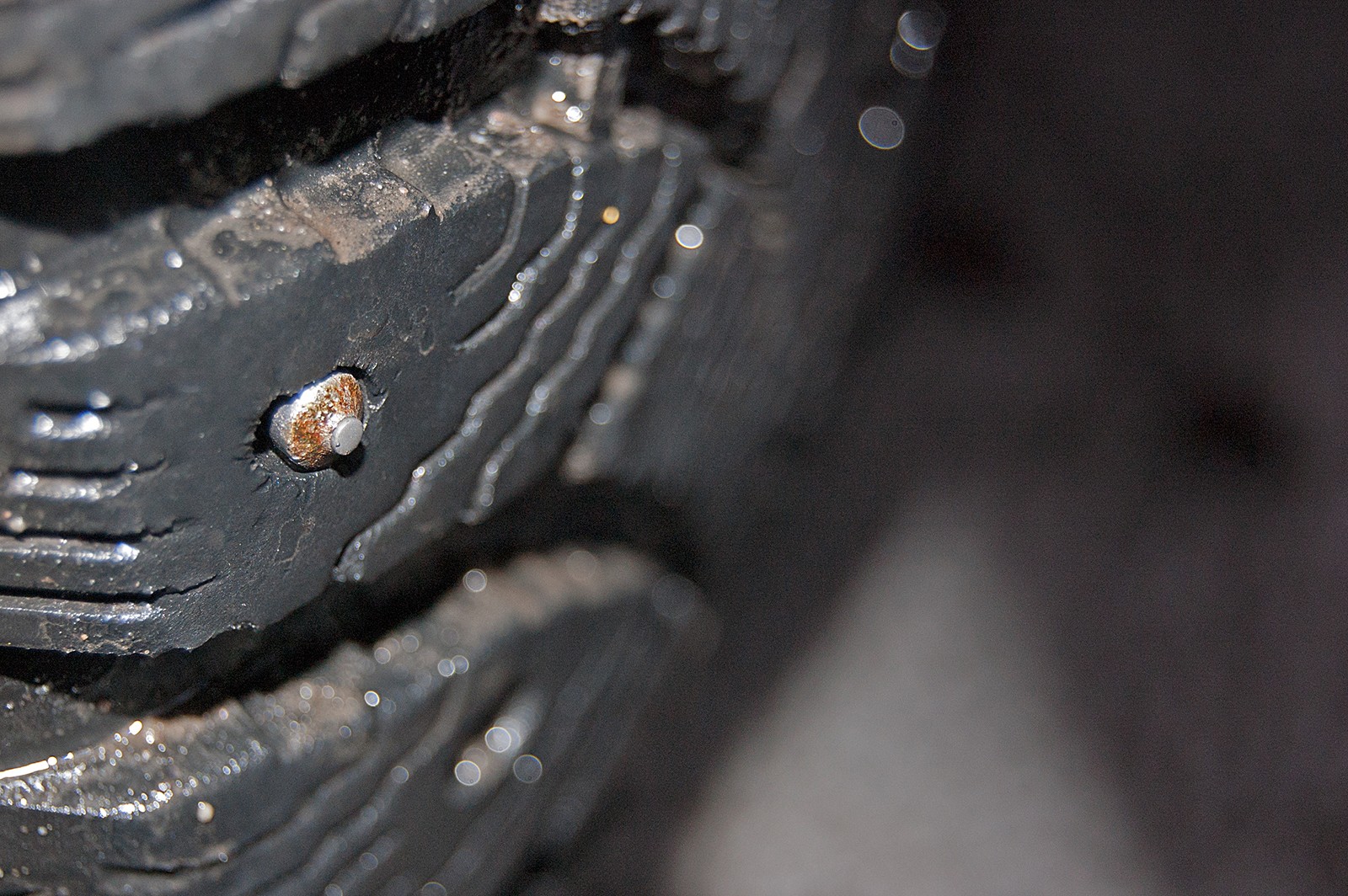 Hands itching to give out at once spoiler: everything is normal, the stud – it is usually good. But after these words nobody will read anything further. And I’ll be upset. And the editor will get upset, and that’s even worse. That’s why there won’t be a spoiler, but an intrigue: don’t do studding under any circumstances! All those studs will fly off and the tire will fall apart. There, that’s better.

But it is not quite right. But there is such an opinion? It exists. And it’s partly fair, because the old methods of studding were disgusting, and not everybody knows how to use new ones.

Probably, when you say “studding”, a lot of people picture in their mind the picture of dirty fellows picking up the old “snowflake” with drills and putting new factory-made studs into it (the ones that were on stock, just like they were from the factory). That’s about how it used to look. There were no special repair spikes in the nature, so they took an ordinary factory spike, a drill bit and, having made a blind hole near the regular spike installation place, inserted a new spike into this hole. It usually did not stay there for a long time.

A special hollow drill was supposed to save the situation to some extent, but nobody cared about such trifles. They used regular drills, which blunted very quickly on the tire material. But the men were tenacious, so local overheating was a normal thing. So were too deep holes. And if to add, that the studs themselves flew out quickly, then the conclusion suggests itself: we don’t need such a studding.

Situation has considerably changed since they have started to use not factory studs for studs, but repair ones. They differ essentially from regular factory studs: firstly, they have enlarged bottom, secondly, they have plastic bushing on stud body, thirdly, they are of different size. All this allows you to put such a stud on a regular place, where a factory one was. This procedure looks easy and without any drilling: repairing stud is installed by special tool instead of the dropped out stud, and the enlarged bottom does not let it to fly out from the place of old factory element. During running-in of the repaired tire, the plastic bushing deforms and fills with itself the space that was broken by the old stud. As a result, the new stud does not play and theoretically does not fly out. And if for factory studs norm of loss of studs for a season can exceed 10 %, the share of the repaired studs should not be more than 1-2 %. Thus, repaired studs are even more reliable than factory studs. But only in case if the tire was repaired correctly.

To stud or not to stud?

The important question: when it makes sense to use studded tires, and when you should not do it? There are some decisive factors here.

One of the basic conditions of successful studding is the residual tread depth. Here, of course, it is necessary to read the recommendations of stud repair manufacturers, so we are guided by them and find the figure of 7 mm. If the residual tread is less, it is better not to stud. It is true that repair studs come in different sizes, but if you get carried away by pushing a stud into a worn tire, you may damage the tread layer. In other words, you might puncture it. In this case, the tire will “bleed” in the stud seat (if it is tubeless).

By the way, the same will happen if you try to stud too old tire. Stud mounting is a “traumatic” process, and if the tire has lost its elasticity, the stud seats will start to leak air. Such a tire will be easier to throw away.

Another question concerns tire tuning. Probably, it sounds a bit ridiculous, but the studs can be estimated as follows: not repair, but tuning (though we know, that any tuning grows legs from the big repair). As the repaired studs are much better in their place than the factory ones, there are those who would like to re-spike a still perfectly good tire. It’s not a bad habit (but you can’t call it useful either), so I want to warn you right away: it is very, very difficult to pull a good tire stud out of a good one. Especially if it is glued (on some tires this happens). Of course, if the stud hangs out like a milk tooth, you won’t have to fight with it. But if it sits firmly … In general, think about whether you can cope with it with your own hands. The work is difficult, tedious, and there are too many spikes.

It is desirable to inspect the studs before each season. There are worn studs, there are worn stud pins or they are completely worn out, and the age and condition allows you to doshipovat? Finish studs. There is nothing wrong with it. The days when it seemed to be a bushcraft and pauperism are over. Now it is quite an effective way to prolong the life of tires. And the main fear (“I’ll give money now, and all studs will fly out”) is also outdated: repaired studs fly out much less often than factory ones.

Besides, during the inspection of the tire, you will have to evaluate the way it wears. Maybe it’s time to think about going to the camber stand or watching the tire pressure better. It never hurts to pay extra attention to your car.

And a little more interesting information. If repair spikes are so great, why can’t the factory spike the tire with them? The answer is simple: it’s very expensive. On average, one factory stud costs a ruble or two, and the repair – about eight. And on average one tire will get more expensive at least 700 rubles. But do we need it? Certainly not. In addition, the manufacturers do not give a warranty on spikes. They can give for cuts or punctures (no pity, we will repair!), but not for studs, because how long they will last in the tire, depends primarily on how and where to drive. If the studded tires after purchase do not run in, and immediately drove on them on bare asphalt, it is possible to lose tires very quickly. However, such drivers do not care about studded tires at all.