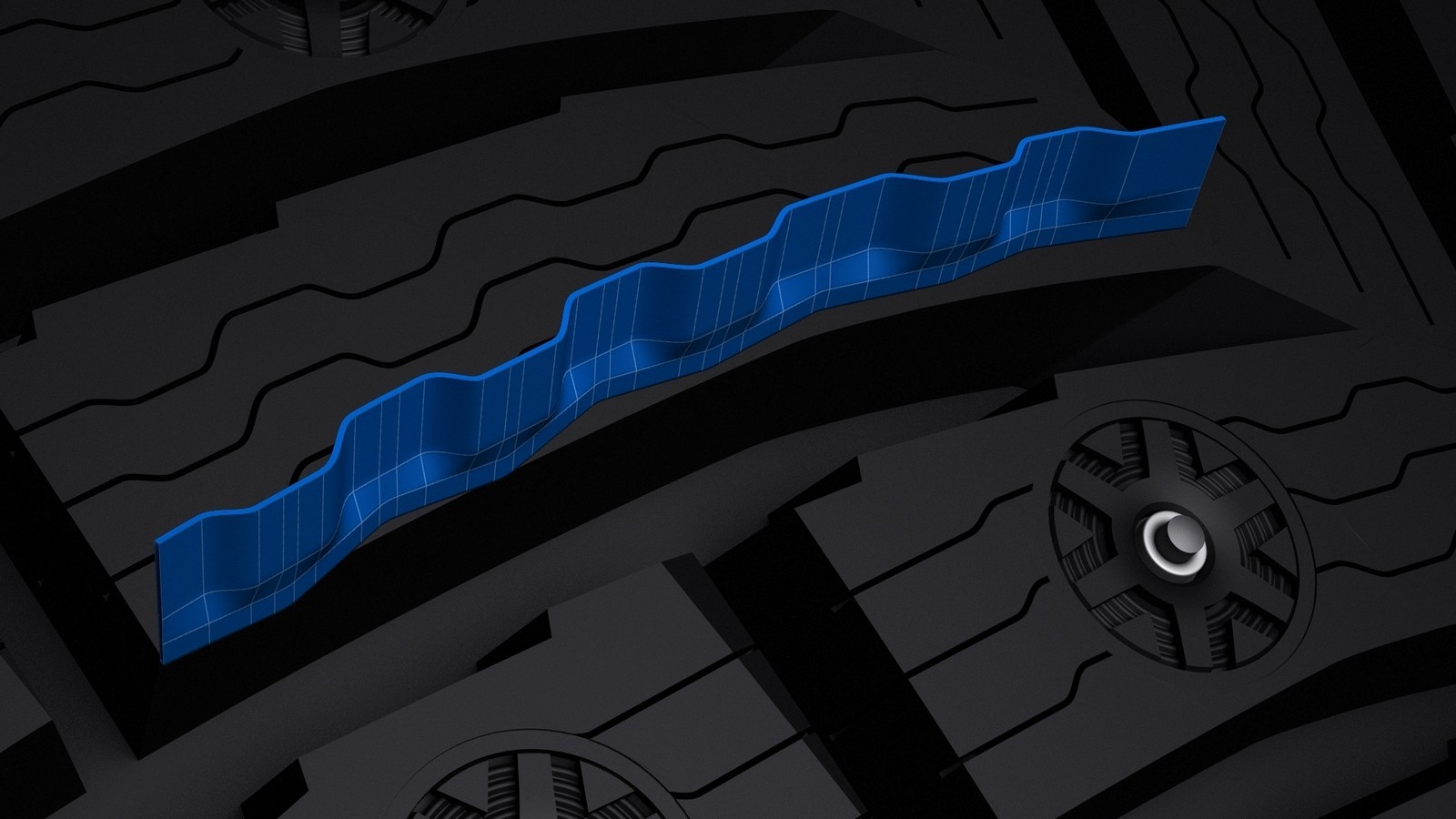 The old trick of the illusionist lying painlessly on a board of nails is actually very simple. The more of these nails per unit area, the less chance of damaging the body. What does that have to do with tires?

Well, the novelty tire MICHELIN X-Ice North 4 with directional tread pattern will cause much less damage to asphalt and has all chances to win new adherents. In fact, the number of studs in it (with the size 205/55 R16) is 250 – 30% more than in the leading competitor tires, and twice as many than in the previous model.

Due to what, then, does the efficiency on ice appear, which is declared as unprecedented? After all, the pressure of each spike on ice decreases with increasing number… Let’s try to understand modern French tire technologies, saving the story with spikes for the dessert.

Don’t assume that every new tire is made from scratch. All the best was invented long ago, and it’s all about the nuances responsible for modern safety and comfort. Thus, the construction of MICHELIN X-Ice North 4 tire partially overlaps with hit for the company models of MICHELIN Alpin range due to the Ironflex carcass and U-shaped slats. By the way, they are also used in the tires for WRC. The tread is absolutely authentic: with a central stiffening rib and enlarged block sectors, in which additional sipes were integrated.

In practice, this tread pattern allows the tire to effectively hold the car on the trajectory during complex maneuvers on all types of surface – from dry to snowy and even icy. But the whole resulting “pattern”, similar to the herringbone pattern beloved by car owners, might not work if it were not for the new composition of the rubber compound designed for the tire’s outer layer.

Michelin’s chemists have tinkered with the elastomers that make up the rubber compound, and obtained a compound that loses elasticity only at -65 degrees Celsius. It allows the tire to retain its surface profile in the contact patch and remain wear-resistant. Such characteristics guarantee operational safety practically in any frost.

There is another interesting fact. MICHELIN X-Ice North 4 had its tread pattern adapted for particularly wide sizes, over 275 mm, by adding a block in each sector. This equalises the surface pressure at the contact patch.

All this means that the novelty works adequately in various temperature and weather conditions. But its highlight is still the behavior on ice, for which such a considerable number of special spikes with a steel body are intended.

Michelin conducted a research which showed that the demand for studded tires in Russia has been growing steadily and today amounts to 3/4 of the total number of sold winter models. There is nothing surprising in this. The younger generation, and experienced car owners are increasingly paying attention to the safety of driving in winter. And spikes, even in big cities with cleaned and watered roads with reagents, still give more confidence to drivers. Even if psychological.

In case of MICHELIN X-Ice North 4, it will be added by the factor that the form of a stud is borrowed from the models of tires used in WRC. Naturally, not one to one, but in a number of principal moments. Due to this, as well as due to the personalized placement of each stud in 22 lines in longitudinal and 22 in transverse direction, their doubled number turns the tire not into a fine ice grater, but into a highly effective tool for maintaining stability of the car on ice.

So, despite the standard spike size of 11 mm in height, it turned out a little narrower, with modified proportions of seating flanges and neck. The diameter of the bottom flange was reduced from 9 to 6.5 mm and the top flange from 6.5 to 5 mm. Nevertheless, the seating in the tire was made strong – such spikes should not fly out.

The peculiarity is that the carbide head made of tungsten carbide is embedded in the so-called cup or stud body, made of steel, as noted above. In the standard design, the angle of the stud to the mounting hole under load can change due to the deformation of the tire. That is, not only the working element, but also the body of the stud touches the surface. And this leads both to its premature wear, and to a decrease in the traction properties of the tire.

The “WRC-model” has a thinned upper part in the form of a rim, from which the working part of the stud directly comes out, does not let the body of the stud touch the asphalt. In addition, it wears in proportion to the tire tread.

Normally, studs wear out faster than tread wear, and a high mileage tire performs worse on ice than it does on snow. In this case, the MICHELIN X-Ice North 4 will retain most of its qualities when driving on both snow and icy surfaces.

The validity of the painstaking work of Michelin’s designers and engineers has been confirmed by numerous tests, which were carried out on the Volkswagen Golf 7. These included both tests for braking distance, better lap times and, of course, noise levels.

In theory, a tire with 250 studs should be noisy. However, thanks to computer modeling, with 1,400 options analyzed for each stud landing, the MICHELIN X-Ice North 4 managed to keep the noise level the same as the previous model. And without harming the traction properties of the tire due to the large number of studs and the reduced pressure on the surface.

According to the results of objective and subjective tests on acoustic comfort at speeds of 50 km/h, 80 km/h and 110 km/h, conducted by TÜV (Germany) on behalf of Michelin in January 2018 in the size 205/55 R16 91V, the French tire showed one of the best results among leading competitors.

Several more tests on braking distance on ice from 30 to 5 km/h and acceleration in the same speed range at -12° C, -10° C and -4° C were conducted by TEST WORLD in 2017-2018. Among the five distinguished competitors, the French tire was in the lead, showing an average braking distance of 3.7 meters shorter than that of its competitors. The same tires, but with 10,000 kilometers of mileage, show a braking result 4.7 meters shorter than the rivals.

Finally, the MICHELIN X-Ice North 4 brought the competitors 3.2 s when making an ice lap, which is a lot. These results were also obtained by TEST WORLD.

By the way, 58 tire sizes available today with a seating diameter of 15 to 20 inches and another 59 for MICHELIN X-Ice North 4 SUV from 16 to 22 inches are aimed at small cars, as well as high-speed models, SUVs and crossovers.

But, as they say, the winter MICHELIN is not the only tyre. In Russia, there are many places where the winter ice is rare, but there is enough frost and snow. As an option – one more French novelty: the friction MICHELIN X-Ice Snow. It is produced according to Michelin’s corporate quality standard all over the world, in particular at the company’s Russian plant.

By its V-shaped tread pattern the tire slightly reminds MICHELIN X-Ice North 4, but has more blocks and sipes, which is not surprising. After all, they are the main working elements of the model. Moreover, there are both U-shaped and of variable thickness, causing the familiar to many efficiency on ice of winter friction tires.

By the way, the depth of the blades is increased to the maximum possible. Even with significant wear, the tire will effectively self-clean from snow and displace water. However, this does not mean that there is no limit to the service life. The legal minimum tread depth for winter tires is 4 mm. This can also be determined from the available wear indicators.

As with the studded model, this is the result of using a modified rubber compound for the tread layer, only this time Flex-Ice. It does not need to retain the stud, and therefore the compound used has slightly different characteristics.

MICHELIN X-Ice Snow becomes tougher at positive air temperatures and retains the plasticity necessary to maintain road safety at low temperatures. Besides this, granulated polymers are introduced into the composition of the tread layer.

In practice, this addition gives the tire a slightly rougher surface. But it provides a capillary effect in the contact patch to absorb the thinnest water film on ice. That is, once on an icy surface, the car will keep steering and will not “float”. Another effect of pellets, according to Michelin specialists, is the creation of micro-rocks for better traction of the tire on snow.

This year, 2020, MICHELIN X-Ice Snow will be available in 94 sizes with a fitting diameter of 14 to 22 inches. The model is designed for a wide range of cars, crossovers and SUVs. But by the fall of 2021, the range will be expanded to another 46 sizes.