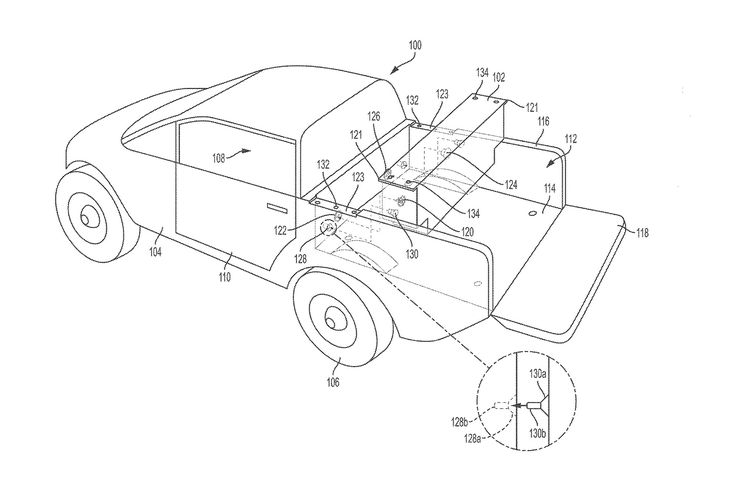 Detachable auxiliary battery, tank turnaround or perfectly integrated camping accessories including kitchen: The electric car startup is coming up with quite a few ideas for its models.

Things are starting to get concrete at Rivian: The Californian electric car startup has now announced the prices and market launch dates for its R1T pickup model and its SUV offshoot R1S. But that’s not all: they have filed plans for the R1T with the U.S. Patent and Trademark Office under patent number 10,833,379 for an auxiliary battery that can be easily connected and disconnected to provide additional power to the electric motors.

Extra battery for the cargo area

As the illustrations show, the “several hundred pound” battery pack extends across the entire width of the cargo area at the top; there are cutouts for the wheel wells at the bottom. It is positioned directly behind the cab, which has the necessary connections on the load floor side in the lower area. The externally rechargeable auxiliary battery shares the heat exchanger with the main battery installed in the underbody; however, it has its own cooling circuit. According to the patent specification, the energy storage system should have several different capacities. However, it is not known what additional ranges are possible.

The patent drawing shows where exactly the additional battery is placed and connected.

However, increasing the range of the R1T is only one possible use of the extra battery. This is likely to be most in demand when the electric pickup has to pull heavy trailers, which according to Rivian can halve the range, or when the driver of the electric car is far away from civilization. This is where another idea could come into play: As company CEO RJ Scaringe announced some time ago, Rivian models should be able to charge each other. The additional battery should therefore also have the corresponding ports.

Turning on the spot

The R1T’s drive system, in which each wheel has its own electric motor, enables the R1T to perform a spectacular maneuver: if the wheels turn forward on one side of the vehicle and backward on the other, the pickup turns on the spot. This maneuver is also known as a tank turn, as the tracks on many tanks can also be independently shifted into a forward and reverse gear.

Rivian has posted a video of the tank turn maneuver of an R1T. To relaxing music, the pickup slowly rotates around its vertical axis. The counter-rotating wheels dig clear tracks into the soft ground in the process – on asphalt, this type of turn is likely to involve considerable tire wear.

Flashlight in the door

Turning around the yaw axis (vertical axis, vertical axis and yaw axis are the same) is also possible for normal all-wheel drive vehicles on soft or very slippery surfaces. However, this requires steering wheel lock and a minimum speed glide – controlled rotation from a standstill only works with drives acting in opposite directions to the right and left of the vehicle. In general, the design with four individually controllable motors is not the worst option for off-road use.

The pull-out kitchen can be stored in the compartment behind the seats to save space after use.

If you think that’s clever, then wait and see what else the Rivian can do. We know the umbrella in the door from Skoda or Rolls-Royce. Rivian translates the idea on the one hand into modern times and on the other hand into outdoor coolness. There sits a flashlight (ok, Skoda has one too), which is charged in its door compartment and waits to be used. One of the battery cells from the battery pack, which also powers the car, works in the lamp.

Camping kitchen and safety hook for the e-bike

What did people like to say in the old days? “What can it do? Can it make coffee?” The Rivian can indeed do more than just serve hot drinks. A complete camping kitchen is available as an option for the versatile pickup, which is stowed in the space-saving compartment behind the seats that is accessible from the side. Cooktops, countertop, drawers – fully equipped. According to Rivian, it can be used to cook for a whole week at the campsite at a cost of just one-tenth of the battery capacity. And those who then like to lie down for a digestive sleep with a full stomach can use the tent setup for the flatbed. That’s camping with 800 hp.

The struts above the loading area can be removed in one easy step and mounted on the cabin as a roof rack. The cargo bed itself has two anti-theft hooks to which you can attach your cargo – a bicycle, for example. If the bike is an e-bike, by the way, you could also charge it during transport, as there are power outlets in the back as well.

Speaking of charging: When the Rivian is plugged in, the LED strip on the front acts as a charging indicator – it turns green and moves further to the right depending on the fill level. This is only a small detail, but somehow a very charming one.

The Rivian R1T is a car for children who like to discover things. Here a flashlight, there a storage compartment, there a removable strut – and of course the fully equipped camping kitchen. The possibility of turning the tank and the additional battery for the cargo area are further unique selling points that the electric pickup has compared to the many (planned) competitors.