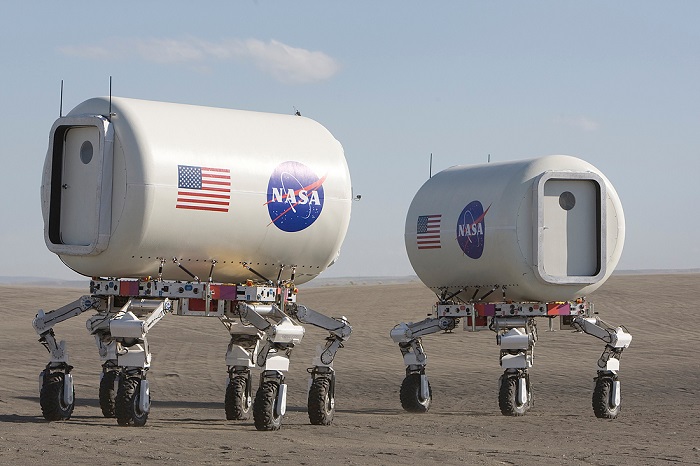 NASA, the largest U.S. space community, has more than a dozen amazing developments and patents to its credit. It is not only about spacecraft and satellites, but also about robotics, weapons and means of transportation for ground use. Today, the agency’s fleet of vehicles includes more than 1,200 vehicles, where you can see both familiar vehicles and experimental models capable of moving on non-standard surfaces.

Consider the most unique models of transport developed at NASA.

A robotized car of a modular type

Before you – an exclusive development of the company, released back in 2015. In appearance, it looks more like a golf car, giving the impression that the corporation’s employees would drive it to the golf course during breaks between jobs. However, this modular robotic project is not designed for entertainment purposes, but to move around the warehouses and the spaceport area.

The compact car has sports seats, but it is not a racing vehicle. Maximum speed does not exceed 65 km/h, although it is limited by the software at 25 km/h. The permissible load on the car is 900 kg.

As a power unit here is used electric motor. Other interesting features of the model are 180-degree turning wheels with independent suspension.

Transporter of the team of astronauts

By design this transporter reminds a hut set on wheels. By the way, it is not exactly a NASA product, but an adapted airport bus for passenger transportation, which was created back in 1990 for the Space Shuttle program. Its main purpose is to take the crew of the space shuttle to the shuttle.

The maximum capacity of the vehicle is from 15 people, and that’s including the outfit. There are ladders on one side for lowering to the ground and an expansion track on the other side. The project also has hydraulic mechanisms for climbing up, which is required for comfortable entry into the spacecraft.

Robotic rovers, which in the circle of astronauts are called “rovers” – is certainly cool, but what means of transportation to use the future colonists of the red planet?

These questions have been raised by members of the space agency for years, so in 2017, as part of its own exhibition, NASA showed the idea of an electric rover. In doing so, it is a fully working prototype, not a decorative demonstration.

The company has developed an electric vehicle that uses solar power and runs autonomously from built-in batteries. There are two modules in the design of the rover – a rear and a front end. The first houses the research center, which can easily be converted into a stationary laboratory, while the second is detachable.

The most advanced technology is present on board the rover, and its design looks impressive. Looking at the concept, you might think that in front of you is a car from a sci-fi movie about Martians.

At the 2005 exhibition, the space agency NASA presented an interesting six-wheeled project resembling a spider. Don’t rush to think that the company planned to develop an army of terrifying robots. Rather, it had the task of testing a mobile system to move around the surface of the Red Planet at low speeds. Such devices should carry different modules over uneven terrain by means of special “limbs”.

Such a non-standard design allows the “spider” to move at any angle. However, its maximum speed is not more than 15 km/h. It should be noted that the vehicle is still actively used because it can freely carry loads weighing up to 450 kg.

Like other prototypes, the development of the American space agency are marked only labels, so the next project we will call the usual moon rover. The first showing of the project took place back in the last decade. It is a research moon rover for the upcoming study of the lunar surface.

The model has compact dimensions and a 12-wheel base. The wheels themselves can rotate 360 degrees, allowing for uninterrupted movement on any lunar surface.

Lunar rover can hold two passengers inside, but in critical conditions it can also hold four people. The rear, which resembles a small container, contains attachments like buckets, cranes and other components for taking samples and performing other research tasks. In addition, the module is equipped with a shower and a bathroom.

Vehicle for evacuation of spaceport personnel

This project is not designed for transportation of cargo and passengers, but for evacuation of space center personnel. It was developed on the basis of military cargo transport with thick armor and several levels of mine protection.

As the manufacturer notes, the vehicle can withstand an explosion of up to 2 tons in TNT equivalent. And even if tire damage occurs under this impact, the car will continue to drive on flat tires.

In critical circumstances – for example, if there is a risk of explosion from ignition, a rope is inserted into the back of the car, which is connected to the rocket to evacuate people who are at height. Using this rope, personnel can get down inside the car instantly. And even in the event of a fuel explosion, people will not be injured.

Rounding out our selection is one of the most amazing vehicles in the world, dubbed the Crawler-Transporter. This 40m long behemoth weighs about 3,000 tons, and it takes the average person no less than 45 seconds to run from one end of the platform to the other.

Two diesel generators of 2,750 hp each are used as propulsion units to move the transporter. Riding speed is 3.6 km/h, and fuel consumption for 100 km distance reaches 35 thousand liters.

Initially, the tracked transporter was used to deliver Saturn V rockets, but soon began to be used for shuttle transportation as well. Although the project was presented back in 1965, it is constantly being improved and is still in service with NASA.