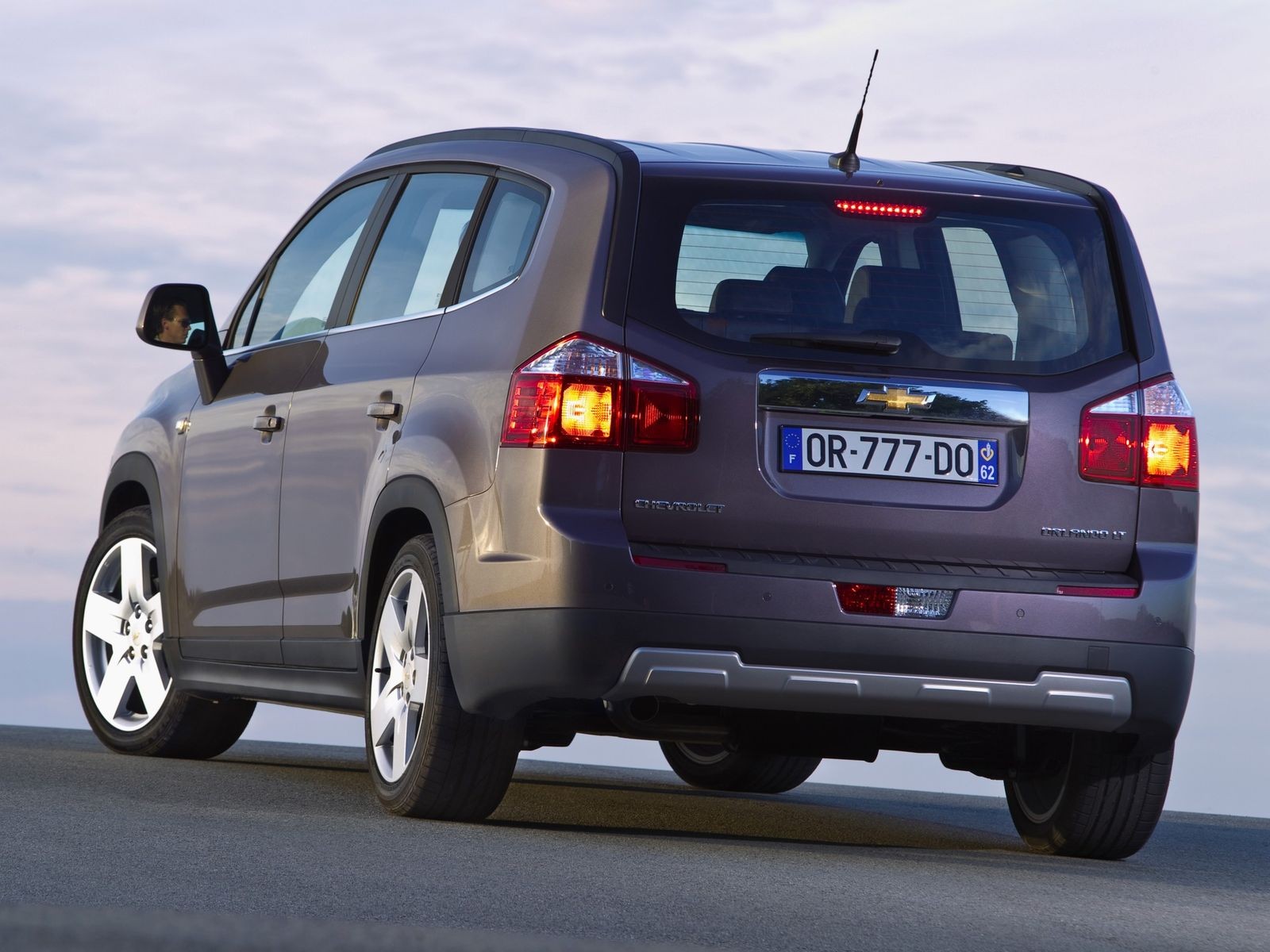 The compact van class in Russia is practically extinct, giving way to crossovers of all styles and sizes. It does not matter that many of them even theoretically cannot have all-wheel drive – everyone is happy, overpaying for a couple of centimeters of clearance and unpainted plastic. Those, who wants to pay for practicality, spaciousness and convenience of city operation, should remember what was on the market five-ten years ago. We should say, there was a lot, and here is one example – Chevrolet Orlando. It was willingly chosen by those who were afraid of French and did not want to overpay for Japanese or Germans. Our colleagues from Avito Avto say that by today’s standards the prices for these cars are quite democratic: the cheapest versions are about half a million, and a good model can be searched for 750-800 thousand. What can Chevrolet offer for these prices, and how difficult will be the choice of a car?

Despite the formerly high popularity of the Chevrolet brand in Russia, the life of the Orlando on our market was short. Sales began at the end of 2011, and the car was even localized – though not at the GM plant in Shushary near St. Petersburg, but at Avtotor. But the prices were quite attractive: one could buy a base car for 700 thousand, and even the top version was cheaper than 950 thousand. Certainly, Orlando also looked more simply against the background of Opel Zafira and Ford S-Max, but not so much that the benefit did not justify purchase. Moreover, Orlando even took the leading position in sales in the segment of compact minivans and in 2013 received a two-liter diesel engine in addition to the 1.8-liter gasoline engine. But the Russian buyer did not have long to argue about the benefits of buying a Chevrolet: in early 2015, the departure of GM from Russia ended the history of the model, and in Europe the car has lasted a little longer. But now everyone has enough time to decide whether to buy Orlando. Let’s find out what we have to face while choosing.

Local assembly, contrary to stereotypes, did not affect the quality of body painting, and the vast majority of cars look very good even despite the age of 5-8 years. Sure, the paint coat is quite thin, but not too fragile, and chips do not rust for a long time, allowing them to be repainted in time. Besides one of the secrets of popularity Orlando in Russia – trimming from not painted plastic on perimeter. Such “crossover notes” turned out to be not only an example of successful flirting with the buyers, but also quite a useful functional element. Certainly, now the metal under them is better to examine closely: moisture keeps under plates, and rust can appear from fastening holes of clips. And there are enough pads: they are on wheel arches, and on bottoms of doors, and on thresholds.

Typical problems, of course, did not pass by the minivan. The front part is bulky here, and though a plastic bumper occupies the most part of it, edge of a hood is still in area of bombardment with pebbles from the road. Therefore, it is worth checking the hood and windshield perimeter for chipping and pitting. Thin strips of chrome on a radiator grill become muddy, and big headlights will get dull. Also at the front, it is worth checking the fixing durability of rear-view mirrors: because of small backlashes they can wipe the paint at the point of contact with doors. Behind, in risk zone is traditionally a trunk door: here the rust appears not only on the bottom edge, but also from under the lantern. And also under the part of optics, located on rear fenders, sometimes there are also hidden rust spots due to paint scuffs.

The inspection points underneath are absolutely typical. Cavities of wheel arches are better to examine closely: time and pile undercovers do not promise anything good after 8 years of exploitation without anticorrosion. Sills under linings slowly but surely grow old too, though there mustn’t be any serious problems here – provided that the car has not been in an accident. The problem places on the bottom are mounts of the subframe and suspension elements, and also places where the ground touches during reckless maneuvers: the plastic cover and clearance of 165mm sometimes provoked the owners to feats. The underbody, by the way, is worth checking not only from the outside, but also from the inside: the hatch is rare in these cars, but nobody cancelled problems with drainage of a climatic system. And in a trunk the moisture is quite probable, despite of almost vertical opening of simple form.

The Orlando shared the Delta II platform with the Cruze and Opel Astra, though Chevrolet did not get the Watt mechanism in the rear suspension. However, the suspension schemes are common and simple: McPherson in front and twisted beam in rear. True, the commonality of the schemes does not imply unification, so the Orlando will not be as cheap to maintain as the Cruze. For example, front L-shaped arm from Cruze at all external and constructive identity does not coincide in geometry (wider track), and it is impossible to buy it as a non-original assembly for 3-5 thousand. The price of the part for Orlando makes 15-25 thousand, and even more. It is especially offensive against the background that a ball bearing is standard change together with a lever, and not every service will undertake its repressing into an aluminum lever. But shock absorbers, not formally unified with Cruze, are quite suitable for it, and for Astra, so the choice of original parts is wide, and for 4-5 thousand you can buy a quality part. At the back everything is simpler: even original shock absorber costs less than 5 thousand, and analogues – from 1.5. Rear beam silentblock is also cheap: 2 thousand for the original part and half as much for a substitute. Even though the hub bearings are changed as a unit with hubs, but they are inexpensive: 4-8 thousand for a branded part and from 1.5 for non-original.

One could not save money on brakes in the family car, so there are always disk brakes on both axles. Moreover, unlike the suspension, there is no “uniqueness” and the choice of non-original parts is wide. The main thing is that the brakes on the examined car are good, including the handbrake, and the condition of brake fluid, hoses and pipes does not hint at avarice of the owner. But everyone can “save” money on steering booster maintenance: the booster is not hydraulic, but electric, and it is not necessary to change oil in the system. Complaints to electric power steering are not frequent, so it is necessary to be sure in absence of knocks and serviceability of electric motor. In fact, in case of failure, you can buy a restored rack for 30-40 thousands, but a new booster motor is twice as expensive.

For Orlando was offered two variants of transmission: base cars were equipped with manual gearbox, and for extra charge it was possible to buy the car with classic automatic transmission. The mechanics of the car from GM, of course, is common with Opel and other models: it is a six-speed gearbox M32, or more exactly, its Korean version MZ0. It is stronger than its five steps relatives, but still it is not ideal. During the inspection it is necessary to listen to it on an elevator for hum and vibrations, and to check the work of synchronizers and clearness of gear shifting. Noise will indicate bearing problems (usually on the secondary shaft), and worn synchromesh will still force you to open the box for repair. Often owners prefer to just buy the unit from a salvage yard instead, especially with the option of installing an Opel variant. From the maintenance point of view, it is worth to remember not only about clutch replacement, which you can buy for 10 thousand, not considering the hydrorelease mechanism, but also about double-mass flywheel. It is capable to reduce the attempts to save money to zero: the original costs 65-70 thousand, and the variant from Sachs is about 30 thousand.

The automatic transmission is GM’s own six-speed 6T40. And it, unfortunately, cannot be called exemplary reliable either. Partly because this box lacks the standard cooling and oil filter: an additional external radiator and filter together with oil change every 50 thousand kilometers are able to prolong its life. Telling the truth, not every car offers them, and the oil in a box is usually changed according to regulations, which spoils the situation once and for all. In addition to standard wear of torque converter locking linings, the box can also give problems with oil pump, planetary gears, solenoids etc. In detail about all possible troubles we wrote in the technical material about Orlando.

While cars with manual transmissions on the secondary market are few, but enough – about 25%, the Orlando has virtually one engine. Appeared in 2013 two-liter diesel did not become popular: at the time of writing the material for sale on Avito was only 12 diesel cars, which is less than 5% of the total number of proposals. So the 1.8-liter gasoline engine of Ecotec family marked 2H0 – the relative of F18DA, A18XER and Z18XER becomes almost unlimited choice. The unit is structurally quite old and therefore simple and reliable. The usual distributed injection, reliable and inexpensive belt timing promises a minimum of complications in maintenance. There are even no hydro-compensators, that at the same time hints at necessity to listen to the engine when it is cold. From “complications” here there are only phase regulators on an intake and an exhaust, but they can be bought rather inexpensively. From the chronic illnesses this motor has the water-oil heat exchanger, which without timely replacement will either start the oil into the antifreeze, or vice versa. And in general the engine leaks are peculiar – it is worth to examine it carefully to estimate the degree of its neglect. However, with good maintenance it can go over 300 thousand before overhaul.

The diesel engine, however, can be not written off. This two-liter engine with marketing designation VCDi is rare enough, but reliable enough, and besides it is not too old yet. Telling the truth, one should not look only at the cast-iron block and chain drive of timing: there is also a turbine with variable geometry, and expensive fuel equipment. So if you definitely want a diesel, you will have to look for a really live copy.

Well and those who are satisfied with the petrol engine, will have simpler choice. Taking into account that we have mentioned above, the logical choice will be Orlando in a good complete set with an automatic machine. Sometimes on sale there are even such surprising copies – with run about 50 thousand miles and with one owner under the certificate. Certainly, it sounds improbable, but there is a possibility to check the seller’s honesty: it is Autoteka. Here one can not only check the number of owners, but also find out the registered mileage history, availability of accidents, as well as any restrictions, cab service and other “dark spots” in the car’s life. And if everything mentioned in the announcement is confirmed, the almost new Orlando has all the chances for the long trouble-free usage. It is only necessary not to save on service of automatic transmission and the engine, and the rest is not so difficult.