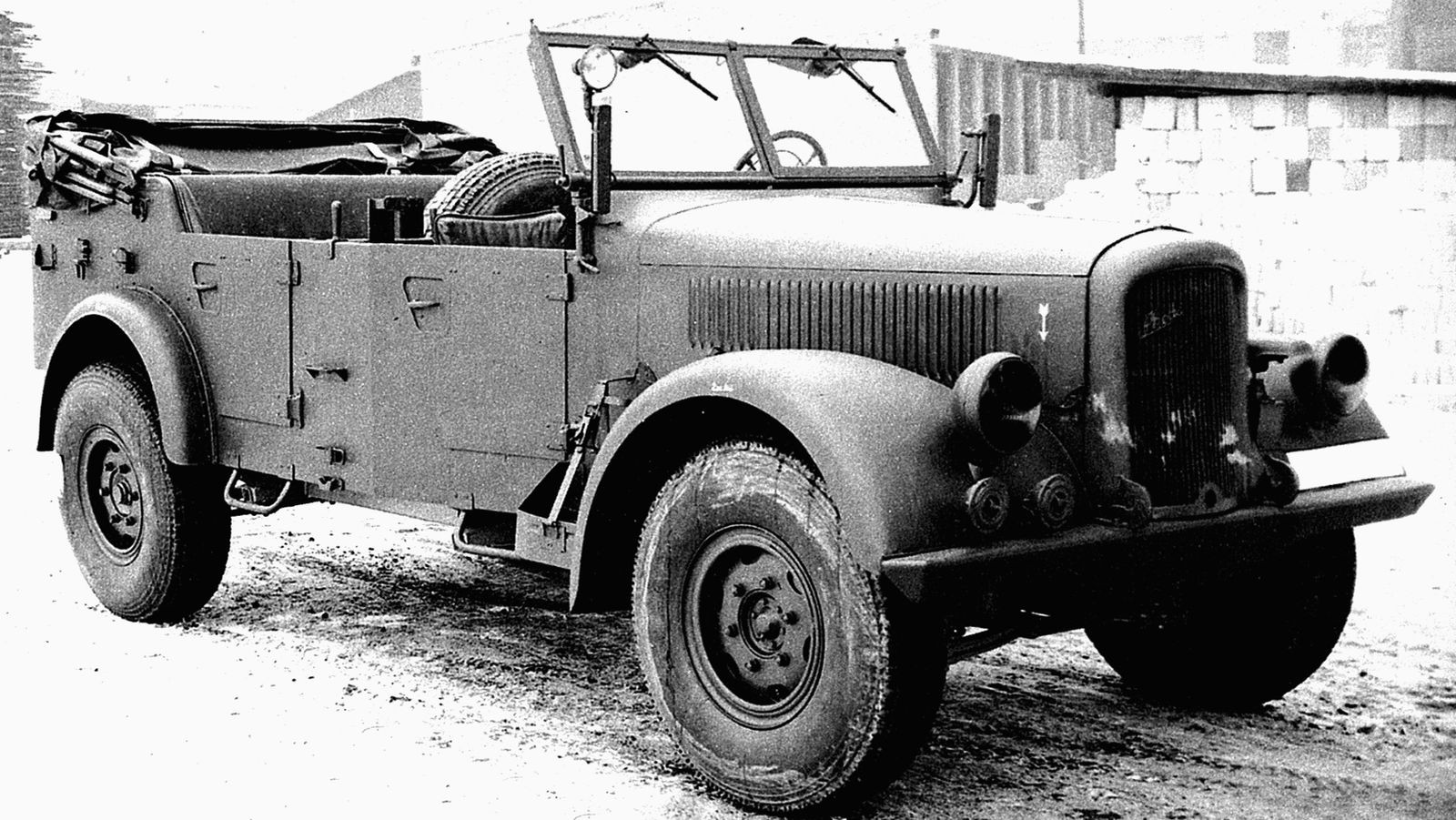 In the years of peace, Czechoslovakian factories produced for their armed forces and armies of secondary European countries an extensive range of various military transport vehicles with predominantly right-hand controls. After the German annexation they were represented by the most famous three-axle trucks of advanced designs, made according to the laws of creation of advanced army trucks of the future.

Since 1939 the Wehrmacht had production of three large independent automobile manufacturers: the main plant “Skoda” from Mladá Boleslav with little-known military branch in Plzeň and Prague factory “Praga”, to which this article refers. In the following, we will talk about the third most famous company Tatra with its unique army vehicles.

The main plant “Skoda”, which produced civilian cars, the production of military vehicles became engaged only after the transition to the German administration, which refocused all production on the military track. The next year army cars made on the model of German “Kubelwagen” began to appear, which managed to keep the tubular frame and independent suspension.

One of the first were rear-wheel-drive HQ cars Ŝkoda-952 for the SS units in the Czech Republic, built on a passenger chassis Superb-3000 with a six-cylinder engine with 80 horsepower and open body. In general design, power and appearance it resembled the German Horch 901.

Later on this chassis were built five prototype 956 (4×4) with front independent lever-spring suspension, which could reach speeds up to 100 km/h on the highway.

In 1940 the plant began production of three-axle vehicle Ŝkoda-903 (6×4) on an elongated chassis Superb-3000 with single rear wheels and trunk with two “spare wheels”. Due to the independent suspension it had a good cross-country ability and could reach 90 km/h. Until 1942 42 trucks were produced. The trucks were used by the SS and the armies of Hungary, Romania and Slovakia.

In 1869, an engineer Emil Skoda gave his name to a small mechanical plant in Pilsen, which eventually turned into one of the largest military-industrial enterprises. In 1930 there started the development of a whole range of little-known three-axle army trucks and tractors Ŝkoda with intricate markings, which had a unique design solutions, masterly coordinated with the requirements of deep unification.

Despite the fact that the arsenal of the plant included more than twenty pre-production models and prototypes, most trucks had virtually the same design and differed only externally by cabins and rear or all-wheel drive. Since 1940, the export versions were equipped with shortened designations, which consisted of a single letter or its combination with numbers (L, S, H, 6L, 6V, etc).

In 1935 the company developed a 2-ton 45-horsepower model 6LT6 (6×4) with an angular cab and rear dual wheels, but the military did not accept it. Two years later the similarly named variant with a 58 hp engine, hydraulic brakes and freewheeled side wheels was showed.

With the introduction of the new troop marking, buyers from the European satellite countries were able to order vehicles of different types and classes according to their own requirements and to use superstructures of different manufacture.

The most common Czech trucks of World War II were medium frame trucks with a capacity of three to five tons, bonneted and half-bonneted, made under strict military requirements and capable of towing a trailer or cannon weighing up to five tons.

The trucks of 6STP6 series (6×6) had the same engine, front drive wheels with oscillating axles, forward tilting cabs and rear drum winches. According to Czech data, the use of diesel engines did not affect the power and parameters of vehicles of this design.

The heavy category 6VTP6 (6×6) was limited to single models with 100-horsepower gasoline or diesel engines with different displacements (8.28 and 8.55 liters) and winches “capacity” up to 10 ton-force, which were supplemented by unique tank transporters for transportation of light armored vehicles on roads with different types of surfaces.

In 1939, two 11-ton trucks 6K (6×6) were built on the 6VTP6-T chassis to transport artillery pieces and LT-35 tanks. They used a six-cylinder tank engine of 175 hp, six-speed gearbox with two-speed transfer gearbox, independent spring suspension and double tires on all wheels.

Since the early 20th century, military trucks of Praga brand were produced at the Prague Motor Plant, which later evolved into automobile branch of the concern. When the neighboring Germany began rapid militarization, the Prague plant limited itself to the production of three unified army vehicles with serial units.

The first of them in 1934 was a simple 2.5-ton truck Praga RN (4×2) with a streamlined exterior. It was equipped with lower valve 70 hp water-cooled engine from the Grand model, four speed gearbox, hydraulic brakes and spring suspension of all wheels.

A year later the basic 2-ton model Praga RV (6×4) was presented with a central spar frame and rear dual wheels, all-metal cab and wooden high-sided body with an awning. The trucks were equipped with a six-cylinder engine from the RN model, gearbox with two-speed reducer, reinforced front torsion suspension and rear on longitudinal semi-elliptic leaf springs with oscillating half-axles. Auxiliary equipment included a 3-ton winch and compressor for tire inflation. Until 1939 the truck came to the armies of Poland, Romania and Yugoslavia.

In the 30s, 59 RVR series vehicles with single rear wheels and radio bodies were built for Romania. This range also included an ambulance with an all-metal body.

The most original in the program were multipurpose and staff trucks Praga AV (6×4) with an open bed for six or eight people and a roomy trunk. Unlike the RV model, they were equipped with 600 mm shorter chassis and a three-speed gearbox with two-speed gearbox. Until the end of 1939, 389 AVs were produced.

With the arrival of the German administration, all automobile production at the “Prague” plant was phased out.