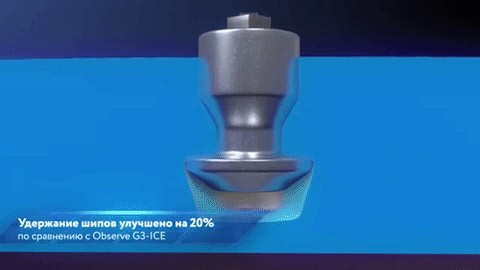 The idea to equip wheels with sharp elements, clinging to the ice, appeared relatively long ago – in the XIX century there were attempts to equip the wheels of carts and carriages with a semblance of spikes. In the 30s of XX century active experiments in motorsports began – drivers tried to scientifically modify the wheels for winter competitions. However, sharp sport “nails” were practically unsuitable for public roads. Nokian’s Kometa-Hakkapeliitta is considered to be the first commercial passenger car studded tire. When the leading tire companies joined the creation of studded tires, the evolution of the stud noticeably accelerated.

At first, the designers had to solve many technical problems. The most common problem was corrosion – many metal alloys can not stand constant contact with wet surfaces, and if the road was generously fertilized with salt and chemicals, the life of the stud and was short. In addition, steel studs significantly increased the weight of the tire and, consequently, the unsprung masses. It was impossible to use light and insensitive to rust metals like aluminium as the soft material wore off very quickly, and the experiments with plastic failed for the same reason. Close became a problem with the seat of the stud – under the influence of constant loads it expanded, weakening the fit, between the stud and the tread got water, dirt and reagents, further increasing the impact of corrosion.

Gradually, designers came to a combined solution – the body, that is the body of the stud, began to be made of a light corrosion-resistant, often aluminum, alloy, and the tip – of carbide material, usually with an admixture of tungsten carbide. To prevent the spike from coming loose and tearing out of its seat, its body is usually made double-flanged, with a thinner connecting leg between the flanges. The wide upper flange has a large support area and prevents excessive wobble, and the wide and flat lower flange holds the stud in the tread. For example, this is the solution used in the Ice Force stud, which is mounted in the Toyo Observe Ice-Freezer winter tire.

For the stud to perform successfully throughout its entire service life, the right attitude on the part of car owners is also important. First of all, new studded tires need a running-in period to ensure that they stay firmly planted in their seats. For this reason, you should drive the first 500 kilometers avoiding sudden manoeuvres and not exceeding a speed of 100 km/h.

Recently, designers have increasingly experimented with the shape of the spike tip in an effort to improve penetration and differentiate the load in the longitudinal and transverse directions. There are square, oval and even cross-shaped tips. In Toyo Tires’ Ice Force spike, the main working part of the tip is made pentagonal, with another quadrangular projection on its apex. This increases the number of sharp corners and traction edges, greatly improving the stud’s penetrating action. As a result, the Ice Force stud provides good acceleration and braking dynamics, working longitudinally, as well as lateral support, significantly facilitating cornering.

But, of course, traction depends not only on the shape of the studs, but also on their number and location in the tread. In today’s tires, that parameter is increasingly selected with the help of computer simulation, such as Toyo Tires’ T-MODE technology. In the new Observe Ice-Freezer, developers used a 28-row studding, which allowed not only to improve traction, but also to reduce noise thanks to the uniform distribution of studs.

The effectiveness of studs largely depends on the ambient temperature. It is believed that they penetrate the ice best when it is moderately cold. When the air cools below -25 degrees, the ice becomes significantly stronger, and it is more difficult for the studs to pierce it. The advantage here is in models with an optimally shaped tip that has a sharp edge, such as the Ice Force stud, and also in tires equipped with a soft and elastic rubber compound that retains its characteristics in severe frost, which allows the rubber to skirt the microroughness of the icy road. The effect increases if the rubber compound is enriched with abrasive elements – such properties, in particular, have the above-mentioned Toyo Observe Ice-Freezer with Microbit technology, its essence is that in the rubber there is added a crushed walnut shell, the particles of which increase the traction properties of the tire on ice. This technological solution was born when Japan banned studded tires and engineers were looking for new ways to improve traction on ice. It turned out that walnut shells are a harder material than ice, and their sharp particles can effectively scratch the icy surface. At the same time, the shell is softer than the asphalt surface and does not harm it.