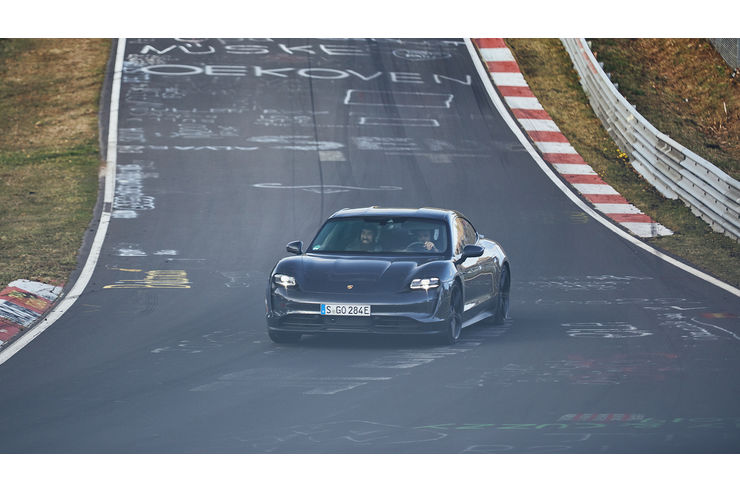 Actually, I wanted to tell you about the Super Bowl commercial for the Taycan. But with six A4 pages of test notes and the aesthetic demands of the graphics, it’s only enough for the short version: In the commercial, Porsche puts the e-athlete in an elite group of legends and classics. All right, expectations raised, here we go.

Three days with the Taycan 4S are on the agenda. First, we head to the curves of the Swabian Jura as efficiently as possible. In the meantime, let’s get something more general straight: The seating position may be a bit higher than in the Panamera, but it’s far below the dashboard. The ergonomics are superb, and the steering wheel is round – despite all the future-this-and-that: four touchscreens, curved speedometer display, air vents that can only be adjusted via monitor.

Four touchscreens, a curved speedometer display and air vents that can only be adjusted via a monitor.

Crap, so much space gone again – never mind, we’ll fast-forward to the Alb: Zero consumption, full power! And step on the organo-sheet brake pedal (steel, carbon fiber, plastic) with equal force. That’s exciting because it takes a great deal of engineering skill to cleanly adjust the transition from recuperation to the hydraulic brake-especially when sport driving is the goal and recuperation is at up to 265 kW, sometimes even into the ABS control range.

You’ll notice right away that Porsche doesn’t use brake-by-wire, because the feedback-strong ABS pulsing is available in the foot as usual. However, pedal resistance and dosage are less clearly defined and precise than in the non-electrified Porsche. After a bit of getting used to it, it works, even the clean unloading of the front end works. Although the pedal feel occasionally varies a bit, the overall brake tuning is really good for an e-sport sedan.

The verdict is similar on the rather tight steering. It is stubbornly eager to straighten out on corner exit, which feels synthetic. In addition, it provides less intensive feedback than in the combustion models: Road damage does make its way into the steering wheel, but even when you drive through a longer bend with high lateral forces, the steering resistance usually only just increases noticeably. 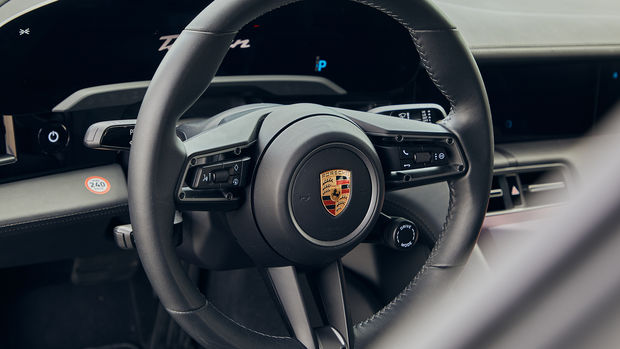 The steering is precise and direct, which is not necessarily a good thing. In the 4S, however, the setup is excellent.

The steering is precise and also very direct, which is not necessarily good. In the 4S, however, the set-up is excellent. Contrary to what would be expected with an unladen weight of 2,332 kilos without a driver, there is only an absolutely minimal delay between the steering command and the change in direction – at least with the rear-axle steering.

In addition, the already very quiet body moves even less on “Sport Plus” than usual. However, the impression does not match that in an extra-tightly sprung sports car. Although the four three-chamber air springs do indeed push up the spring rate, it feels more like it’s due to the low center of gravity: that’s fascinating and shapes the driving experience.

The center of gravity is even lower than that of the 911, which is due to the battery mounted low in the vehicle floor, which, including the crash frame and high-voltage wiring, already weighs around 580 kilograms in the standard version. The installed “Performance Battery Plus” increases the weight to 630 kilograms, the price by 6,521 euros and the gross capacity from 79.2 to 93.4 kWh. 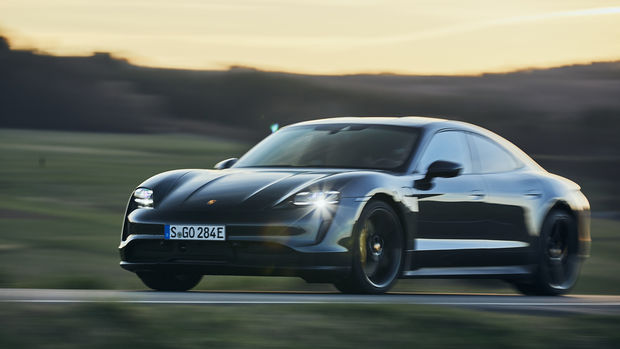 The center of gravity is below that of the 911, which is due to the battery mounted low in the vehicle floor.

Although the 4S doesn’t feel light, of course, the mass never takes away from the driving experience. Sure, if you push too hard in the sharper corners, the Taycan sometimes slips a bit over the 265 front tires. But an impulse from the rear axle (305/30 ZR 21) then immediately pushes the car back onto the line.

These slight oversteer impulses are sparse even in Sport ESP mode, although the 4S has torque vectoring on both axles. The front engine can distribute the power wheel-selectively via its input planetary gearbox, while the electronically controlled limited-slip differential, which Porsche flanges to the two-speed box there for 1,487 Euros, is needed at the rear.

The necessary power is certainly not lacking. With the optional battery, power increases from 435 to 490 hp and the launch-control power available for 2.5 seconds from 530 to 571 hp. You fire out of the corners like crazy with the powerful traction, even power launches never lead to spinning wheels. 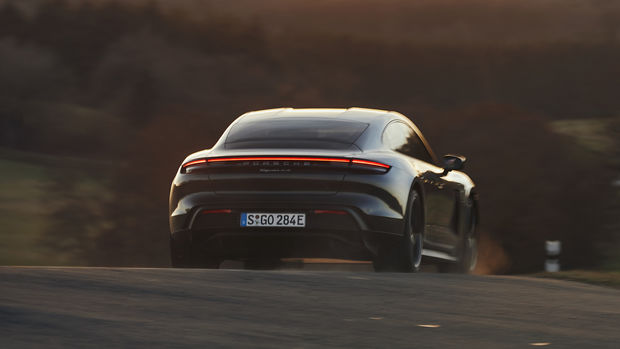 The necessary power is definitely not lacking.

The Taycan goes down well, but after 68 minutes and 69.6 kilometers it’s time to call it a day. The charge level has dropped from 72 to 31 percent, so it’s off to the charging station with a light foot of electricity. The consumption of this drive, which is characterized by many acceleration phases? 62.9 kWh/100 km. In contrast, it packs 461 kilometers (20.9 kWh/100 km) on our eco lap.

We arrive at the 350 kW charger with ten percent. The 4S is supposed to be capable of a maximum of 270 kW, but the display soon jumps to 255 kW, and at 52 percent it’s still 151. After 23 minutes, the display in the center console already shows 80 percent: “The Taycan is running! That must be it for today, we’ll continue tomorrow.

Not very refreshing at first. The short version: The 12-volt battery needed to start the car has discharged overnight – no user error. All right, then open the door with the emergency key and apply juice to the fuse box to open the front hood. Then remove the panel under the windshield, jumper it again, and lo and behold, number 4S is alive, the 800 volt battery is full.

The day is almost over, but we can still go for a short drive around the Alb. The first new insight: The continuous high beam of the LED matrix headlights works excellently. Not so good: The parking cameras failed for the second time, and the passenger touchscreen often goes into standby mode arbitrarily. The only solution: The front passenger has to move a lot on the seat to get the screen to come back on (seat occupancy mat?).

Anyway, now we sleep, get up early and drive from Stuttgart to Nürburg. The route is perfect for the 4S, because up to the 350 kW charger in Bruchsal there is often free driving for 125 kilometers. After that, it’s 211 kilometers at an almost constant speed limit to Brohltal, where the last fast charger is 38 kilometers from the Ring. 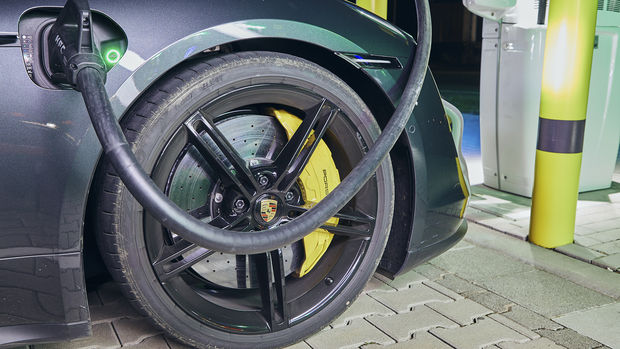 The fat cable often lies on the paint.

Our plan runs brilliantly, only the last stop costs us time: the charger stops while we are munching on burgers. We blame the charger, because there were no problems elsewhere.

Sneaking to the Nordschleife costs us 13 percent of the full battery – quickly get a tourist ticket for two laps for 60 euros and then off we go. Today, the VLN variant with parts of the GP circuit is open, so 24.358 instead of 20.832 kilometers.

We take a relaxed approach to the first lap of the year: no limping, but far from our own limit. Nevertheless, the first findings come promptly. The Taycan handles the bends in the Hatzenbach cleanly, hammers its way from Hocheichen to the Quiddelbacher Höhe, and despite a relaxed drive, the speedometer shows 220 mph before the hilltop to the airfield. 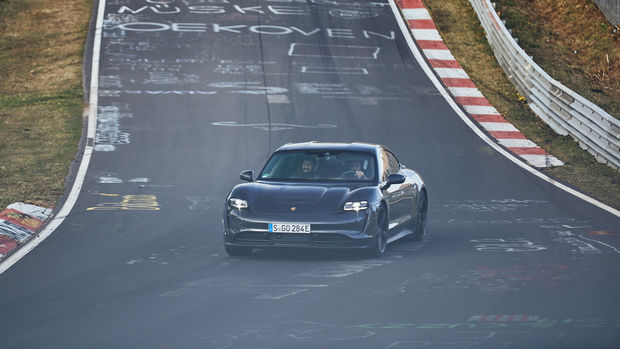 The Taycan handles the turns in the Hatzenbach cleanly.

The optional spaceship sound helps to understand the load conditions. Basically, the 4S sprints more than fast because there is always plenty of power immediately. The Turbo S takes 2.7 seconds from it to 200 km/h, but the 4S puts much less strain on the same battery, which thus stays cool longer.

In addition, the ceramic brake decelerates massively, and the weight isn’t a huge factor at touring speeds otherwise either – until the foxhole. Rolling through comfortably at 200 sounds good, doesn’t it? Wow, that’s intense! After the compression, the car is pulled so hard onto the line without your intervention at the steering wheel that it becomes clear how unpleasant over 2.3 tons can be.

Here and there the Taycan can rest for the rest of the lap due to yellow flags, in between it is allowed to let off a little steam. In the end, the lap costs 33 percent of the charge with an average of 111.6 kWh. So a second lap should be possible. It should, because the track is closed. That’s just as bitter as the test notes: There are still at least two, more likely even three laps in there. So see you soon, Taycan.

No, definitely not. Artificial mini-engine noise and constantly stopping to charge – neither sporty.

Handling, fast-charging kit and range of the 4S are impressive. Why only four stars? Because of the less otherworldly acceleration compared to the Turbo S and the dropout.