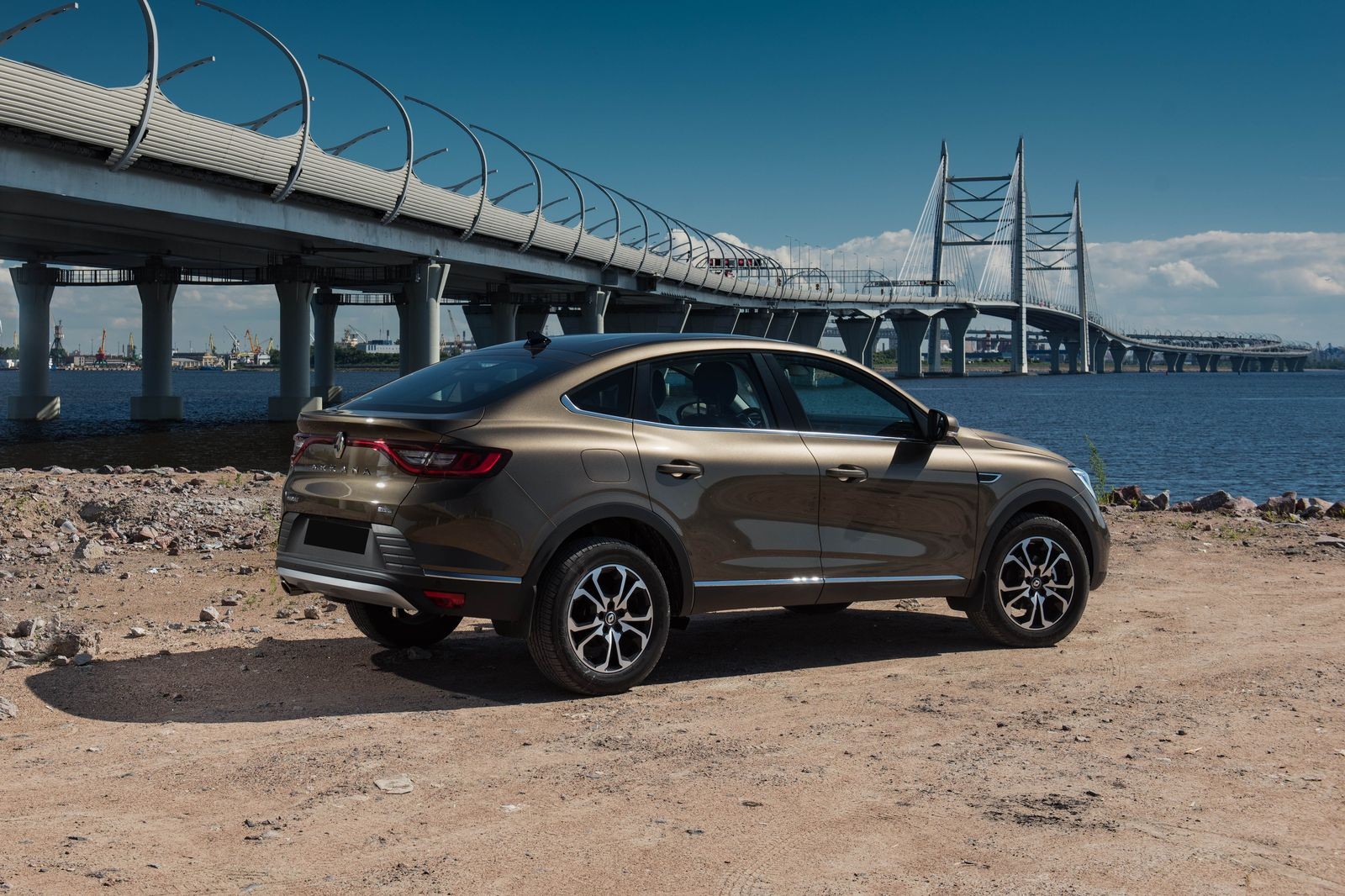 Reason 1. The coupe body is the new trend!

We remember very well what a furor Renault Arkana made at the Moscow International Motor Show in 2018, where the world premiere of the future model took place. At that time, the Arkana appeared before journalists and spectators still as a concept. On its way to the assembly line, the unique Renault model, designed for the Russian market, preserved all its aesthetic merits, not at all deceiving the expectations of potential buyers. The shape of the body, and such cars are usually called crossover coupe, allowed Renault to attract new customers. Half of those who sat behind the wheel of Arkana had never owned a car of this French brand before and did not think about it.

Crossover coupes entered the Russian market with the light hand of premium brands. First came the full-size crossover BMW X6, then the baton was picked up by other brands, then this type of body began to spread to the lower classes. Meanwhile, in the premium segment now you will not find a crossover coupe below the medium-sized segment, and here in Renault decided to make the world’s first subcompact SUV with this body!

The appearance of the Arkana with a falling line of the roof is difficult to imagine in isolation from the high ground clearance and the shape of the wheel arches, again emphasizing the purpose of the crossover. We will still talk about off-road characteristics of the car, but so far we’ll note that the appearance of Arkana once again confirms: we have a stylish modern versatile car for active drivers who are not afraid of departing from the asphalt, but also have the skill to drive, at least on a light off-road. Special pride of Renault designers are the found proportions of the body, which is traditionally considered a fundamental element in the appearance of the car. But the most expressive in the car’s appearance are, of course, the headlights. Thanks to the fully LED Pure Vision optics with recognizable C-shaped elements in the front and LED elements with Edge light technology in the rear lights, Arkana is easily recognizable from a great distance and from any angle.

The Arkana buyers will be interested to know that the appearance of the car is synthesized from the work of several design studios and put together in the Renault Design Center in France under the direction of Lorenz van den Acker. But the main thing is that for the next Renault models in Russia the French will apply exactly those solutions that make up the Arkana crossover-coupe look.

The reason 2. On lack of roads – not worse than Duster!

Outside the asphalt, despite of its “deceptive” city appearance, Arkana feels like a real SUV. In the segment of subcompact SUVs another French car Renault – Duster – many years of flawless performance earned the popular title of one of the most passable cars. Not surprisingly, designing the Arkana, engineers took all the best from the popular in Russia Duster units. For example, the multi-disk friction clutch, which takes power to the rear wheels, is exactly the same. It has already shown its resistance to overheating, reliability when working in a blocked state, which is required when driving on sticky and loose soils. On the Arkana, this clutch seems even a bit excessive in this respect, but it only increases the safety margin when driving off asphalt.

It is interesting that on Arkana the system of a full drive is accessible also with the base 1,6-liter motor which works in pair with 6-speed manual gearbox. Other matter that the version with 1,3-liter turbo engine and variator to which we have already devoted the separate material gives much more trouble-free and comfortable driving on lack of roads. Any experienced jeeper will tell you that presence of the torque converter will allow you not to go too far with traction and not to let the wheels slipping. High traction of the 1,3-liter engine, accessible already in the lower range of revolutions – as at all turbo engines promotes cross-country ability. But, certainly, not only the power-unit Arkana gives ample opportunities outside the asphalt.

Let’s turn to the figures, which characterize the so-called “geometric cross-country ability”: road clearance in Arkana is 205 mm, angles of approach and departure – 21 and 26 degrees, respectively. Engineers added protective elements in the lower part of the body, and mudguards and a metal engine crankcase protection are included in the basic equipment of the car.

It is gratifying that Renault, despite the cautious attitude of the Russians to downsizing engines, courageously inculcates European values in our market, and with an innovative crossover Arkana offers one of its best engines. The 1.3L TCe 150 is not just developed in close cooperation with Daimler engineers, but is also actively used on models of the German brand. Let’s take a closer look at the characteristics of this unit and the properties of the car, which they affect.

So, thanks to the turbine, the maximum torque of 250 Nm is reached already at 1700 rpm. It is very important for city driving, and besides it allows feeling freely both in a stream, confidently accelerating from traffic lights and thus not untwisting the engine “into a ringing”, and on impassability. High traction at such low revs gives the Arkana an advantage over other peers, even those equipped with a 2.0-liter engine. In addition to turbocharging, electromagnetic injectors that deliver fuel directly to the combustion chamber are also responsible for fuel efficiency. As a result, the Arkana consumes less than eight liters per 100 kilometers in the combined cycle.

The driver has at his disposal the Multi-Sense system, which is responsible not only for the motor response, but also for the algorithm of the variator and regulates the force on the steering wheel. To put it simply, with its help, the owner can change the character of the Arkana. Perhaps, it is one of the most interesting options in the crossover, but more details about the options – in the next point.

The key to the Arkana’s success in the Russian market is the rich packages. We mean the richness of the base model, and the presence of options that are available in other cars only in higher classes. Let’s start with the all-around camera system, which you can easily and intuitively manage with the help of the screen of the multimedia system Easy Link. There are a total of four cameras on the Arkana – they provide views to the front, rear and sides. Thus, the driver fully controls the space around the perimeter of the car, which facilitates not only the parking process, but also maneuvering in cramped conditions, for example, in densely packed yards. The 8-inch touchscreen of the Easy Link system is oriented towards the driver, who can connect his smartphone to Apple CarPlay, Android Auto or Yandex.Auto. The latter, for example, allows you to display Yandex.Navigator on the car screen. What is interesting, the location in it is determined not only by GPS, but also by the rotation of the wheels of the car, so the driver will not get lost even in places with weak signal.

The Arkana also offers drivers confidence on the road with a range of electronic aids that enhance active safety: the blind spot monitoring system reduces the likelihood of a collision with passing vehicles that are not in the rearview mirror. Along with this, the driver is assisted by cruise control maintaining the set speed, and when driving in unfamiliar cities and towns – the speed limiter.

This is a sign of expensive equipment, but the basic equipment Life also contains everything you need, and not only in terms of functionality. Renault did not skimp on design: there is light tinting of the windows, and turn signal repeaters on the mirrors, and chrome plated over the exhaust pipe. At the disposal of the driver is the Radio Connect system with the ability to connect a smartphone to the car through the R&GO application, which has a wide range of functions, and power steering with variable efficiency depending on speed. LED optics, responsible for low and high beam, again, will not be deprived of the buyer of the most budget version, as well as electric window lifters for all doors.

One of the unconditional advantages of Arkana is the remote engine start system, which we are used to see on the models of the premium segment. With the help of the multimedia system, it can be programmed for the right time, so that by the time you get in the cabin will be warmed up, and you can immediately go on the road. In addition, you can also use the key card, which allows you to start the engine from a distance of not more than 200 meters, which is very useful for those who live outside the city. The key card also allows keyless access: the driver can open the car door without taking the card out of his pocket. After the trip is over, the locks will close on their own when the owner takes a few steps away from the car.

Of course, Arkana also offers options aimed at pleasure – this is what demanding customers require. For example, audiophiles will be pleasantly surprised by the Bose sound quality, and aesthetes will be surprised by the Ambient light interior, creating a unique atmosphere of the interior.

Domestic drivers will be especially pleased with the preparation for the conditions, which is the same for all configurations: here is a steel protection of the engine sump, and protection of wheel arches, and full-size spare tire (which is important – even on 4×4 version). There is also a set of necessary for our latitudes warm options: the driver and passengers will not get cold in the “Arcan”! Let’s list the heated elements: front and rear seats, steering wheel, side exterior mirrors, windshield and cargo door glass. Heated nozzles, allowing to use the washer of windshield at low temperatures, together with the tank, increased to five liters, and indicator of low level of washer fluid will allow you to travel comfortably in winter.

The power plant is not afraid of frosts. Firstly, the engine is adapted to start at -30 degrees – Arkana is equipped with a high-capacity battery. Secondly, a powerful generator ensures quick recovery of the battery and smooth operation of all onboard systems. Thirdly, the engine control unit is calibrated specifically for work in cold climates, and fourthly, all technical fluids are designed for low temperatures – the engine and gearbox oils, brake system fluid.

In addition to weather conditions, there are road and off-road. We have already talked about the Arkana’s cross-country ability, and now let’s see how the car is protected from intensive use. It turns out that the doors are designed in such a way as to prevent dirt from getting on the sills. It not only prolongs the life of paint coating, but also allows not getting your pants dirty when getting in. Of course, the crankcase pan and fuel lines have extra metal protection, and some body cavities are waxed.