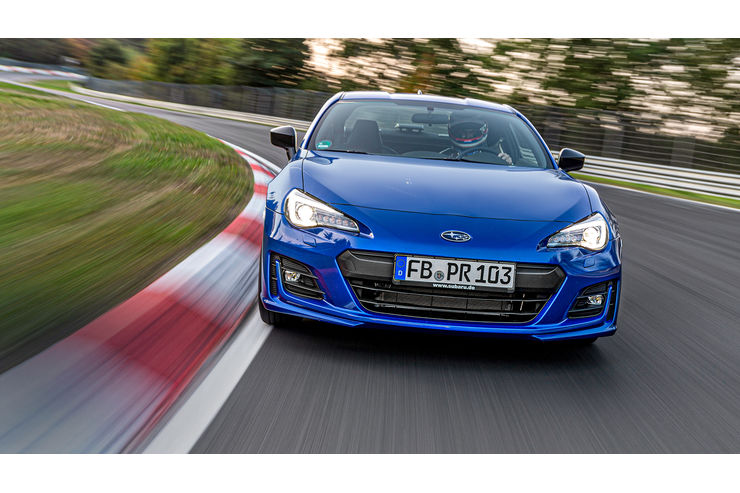 Winding country roads in the Taunus instead of yawningly boring highways – even the journey to the Nürburgring starts off more emotional than usual today; we’re coming from the Subaru Germany branch in Friedberg (Hesse). Prelude to a somewhat different supertest. Today we don’t welcome one, but we say goodbye to one. After eight years of production, the Subaru BRZ is retiring. Today we celebrate this special sports car concept once again with the BRZ Final Edition, limited to 38 units.

Some will now wonder what such a supposedly underpowered and outdated vehicle is doing in the Super Test, while others will rejoice. Ferrari, Porsche, Lamborghini, McLaren – not everyone can afford a high-priced sports car. Subaru is taking a step in this direction: for 39,255 euros, it’s not just a limited special model, but a compact and agile sports car that’s fun to drive.

The technical DNA of the BRZ and the vehicle called GT86 at Toyota comes from Subaru. The basis is the modified AS1 platform of the fourth Subaru Impreza generation.

A brief look back at how it all began: The BRZ is the first model to result from the cooperation established in 2005 between Subaru parent Fuji Heavy Industries (FHI), predecessor of today’s Subaru Corporation, and Toyota. In February 2006, Subaru had decided internally to develop the BRZ. In April 2006, Toyota then contacted Subaru with an official inquiry as to whether there was interest in a joint project.

The joint project then started in August 2006, with Toyota primarily responsible for product planning and design during the project phase, while Subaru was responsible for engineering and production. The technical DNA of the BRZ and the vehicle ultimately named GT86 at Toyota came from Subaru. The basis is the modified AS1 platform of the fourth Subaru Impreza generation. The four-cylinder boxer engine called FA20D was also developed by Subaru. The combined intake manifold and direct injection D-4S comes from Toyota.

5,000, 6,000, 7,000 revs – the rev-hungry naturally aspirated engine suddenly catapults you back to the era of engine development when turbo engines did not yet rule the automotive world as a matter of course. You don’t have to worry about a turbo lag here, but the power delivery in the rev range begins with a phase of glossing over. Even fans of naturally aspirated engines have to admit that this is a dead zone. Even in the mid-range, the boxer seems sleepy under full load before it slowly wakes up from 5,000 rpm.

Eager for revs and light

The two-liter naturally aspirated engine wants revs: maximum torque of a tender 205 Newton meters is available at 6,400 rpm, 200 hp only at 7,000 rpm.

The maximum torque of 205 Newton meters is only available from 6,400 rpm. Rated power? An equally timid 200 hp at 7,000 rpm. If you want to move forward quickly, you have to keep moving between 5,500 rpm and the rev limit of 7,500 rpm. At the same time, the boxer with its present high-rev sound sounds more potent than it actually is.

Driving pleasure is provided by an overdose of gear changes – manual, hand-cracked gear changes, of course. After one day of testing in the BRZ at the latest, you’ll have calluses on your right palm. The bony six-speed manual, blessed with short shift travel, feels like a relic of bygone days when PDK, DKG, and DSG were still unfamiliar letter abbreviations. Starting and engaging after gear changes in normal-speed everyday driving still requires a talented foot on the clutch pedal and concentration here – otherwise the BRZ jerks and shakes presently. Delightful, something like this has a bit of a driving dynamics 90s party about it.

But it’s somehow exactly the combination of this boxer engine and the oldschool manual that perfectly suits the BRZ’s charm. Especially in twisty country road corners, the Subaru is in its element and shows once again that sports car development today has largely taken a completely wrong turn. More and more weight today almost inevitably leads to ever increasing engine power. On the Taunus country roads mentioned at the beginning, for example, the BRZ prances happily in front of the nose of an M2 Competition. It takes more than 400 hp to get the almost 1,600 kilograms up to speed. 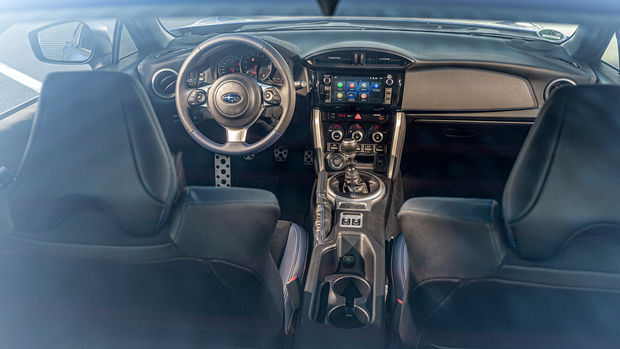 The combination of underpowering on the one hand, but handiness and agility on the other, make the BRZ an ideal entry-level rear-wheel drive car for Nordschleife beginners.Acceleration and pulling power can be compensated for in a heavier vehicle by a higher engine output, but not the light-footedness and handiness, which inevitably dwindle more and more as the kilograms increase. And it is precisely this nimble and light-footed handling that is the core competence of the Subaru BRZ.One of the primary development goals was therefore to keep the vehicle weight and center of gravity as low as possible. Sheet metal of a lesser thickness is therefore used in the upper part of the body than for the lower body sections. An aluminum engine hood and lightweight glass in the rear window and rear side windows complete the lightweight design concept.

To lower the center of gravity, the engine was designed to be compact. This is complemented by a low installation position for the engine and a transmission with a flat design. The result of all these measures: The center of gravity height is 46 cm, and the weight is only 1,262 kilograms.

The combination of underpowering on the one hand, but handling and agility on the other, makes the BRZ an ideal entry-level rear-wheel drive car for Nordschleife beginners. Anyone who only looks at the absolute lap time with this sports car has not understood the BRZ concept.

Easy drivability at the limit

The Final Edition now waggles through the Hatzenbach switchbacks as refreshingly as it does on winding country roads. When steering, the rear end always swings along slightly. Thanks to the precise steering and the low steering angle requirement, the rear end can be kept on course easily and playfully with minimal steering corrections.

A successful setup between the front and rear axles is also responsible for the easy drivability at the limits on the Nordschleife. Or in other words: the balance of the BRZ is just right! The turn-in behavior of the front axle is precise, but not too sharp. Depending on the cornering radius, a slight tendency to understeer is noticeable during cornering. Especially on the Nordschleife, however, this offers reserves at the limit and the driving dynamics remain well controllable.

The rear axle reacts agilely with a slightly pressing rear end to load changes as well as to steering or braking impulses. However, the reactions are very predictable. Even under load, the rear end pushes along slightly in some corners towards the end of the turn – such as at the end of the fast Metzgesfeld left, when the Subaru rear end pushes out slightly onto the raths in fourth gear at 160 km/h.

With its rather loose rear end, by the way, the Subaru BRZ is perfect as a training tool for drifting. Turning in briskly and then driving crosswise – only a few sports cars can be moved as easily and as handily in a drift as the Japanese two-seater. But on the Nordschleife, the only thing that counts today is the clean chase of the racing line. 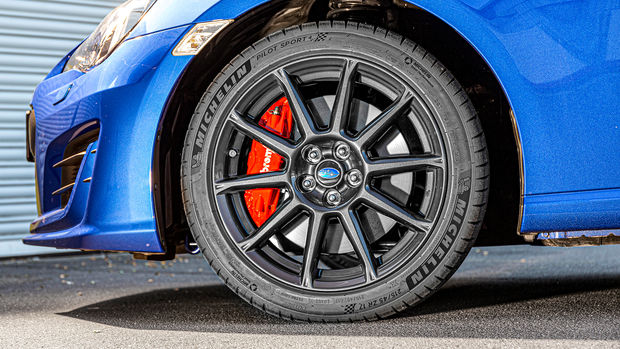 The sportier Sachs shock absorbers and the Brembo brake system were previously only available in Germany for the twin brother Toyota GT86 as optional extras or with the GT86 Dragon equipment line.

What distinguishes the limited Final Edition? In addition to the limited edition badge on the center console, “Final Edition” lettering on the fenders, and splashes of color in the interior, the special model wears sportier Sachs shocks and a Brembo brake system. Said suspension upgrades were previously only available in this country for its twin brother, the Toyota GT86, as an optional extra or with the GT86 Dragon trim line.

Carrying a lot of momentum

The Brembo brakes prove to be a stable partner on the Nordschleife. However, the inharmonious ABS control is always noticeable, especially in the wavy braking zones. This is not a bad thing, since late braking points make little sense in the BRZ anyway. It’s better to brake a bit earlier and moderately, but to take as much momentum as possible into the bend.

The Final Edition also wears 17-inch Dark metallic alloy wheels. More important than the color of the rims is the tire fitment. Instead of the Michelin Primacy HP tires, which are intended to ensure long mileage, the Subaru now takes the Nordschleife under its wheels with the Michelin Pilot Sport 4 tire, which is also available. Its dry grip level is considerably higher and the tire is therefore more suitable for the racetrack.

In view of the 215 tires, which are rather narrow for today’s times, an employee of a German sports car manufacturer smirked and said that “the BRZ looks as if it were wearing four emergency wheels. Compared with other sports cars, the grip level and mechanical grip are only average, which makes it all the more astonishing what fixed cornering speeds the Subaru BRZ sometimes achieves. By comparison, the BRZ’s cornering speeds are on a par with the small agility champion Ford Fiesta ST, which is one of the racing dwarfs in the small car guild. 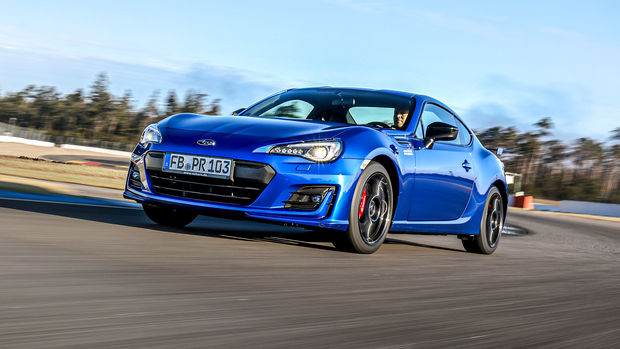 Regardless of whether it has 180, 190 or 200 hp – rarely has a sports car with so little power nevertheless given so much pleasure as the BRZ. Its qualities cannot be measured with a stopwatch.

So why is the Fiesta ST a full 16 seconds faster than the BRZ Final Edition on the Nordschleife? Especially at the Ring, the naturally aspirated engine turns out to be a real air pump. The Fiesta ST’s three-cylinder turbo engine also only has a rated output of 200 hp, but it pushes the hot hatch from 0 to 200 km/h in 28.9 seconds – the BRZ Final Edition needs an incredibly tough 35.3 seconds for the same exercise.

It’s understandable that the Subaru loses a lot of seconds on the uphill and straight sections of the Nordschleife. The BRZ only manages a meager 178 km/h at the top, while the Fiesta ST jogged up the Eifel slope at 192 km/h.

And how does the BRZ Final Edition fare against the identically constructed GT86? In most of the corners, the Subaru wattles the Toyota that competed in sport auto 2/2013 on Bridgestone Potenza RE050A. But why the BRZ can only distance the GT86 by one second at the finish? The truth emerges on the dynamometer: unlike the GT86 (measured power: 200.6 hp), the BRZ Final Edition with measured 179.6 hp does not reach its rated power. A performance shortcoming that is clearly noticeable in the acceleration up to 200 km/h in comparison (GT86 0-200 km/h: 32.3 s).

Whether 180, 190 or 200 hp – rarely has a sports car with so little power nevertheless provided as much pleasure as the BRZ. Rarely, moreover, has the lap time on the Nordschleife been so unimportant. Its qualities cannot be measured with a stopwatch. Dear BRZ, I will miss your handy driving fun character.

Down-to-earth and reliable – a great brand!

Boring and backward – no one needs it!

Before the second BRZ generation is launched in 2021, the Final Edition celebrates the first model series once again. Even eight years after the model launch, the Japanese coupe still delights with its handy handling. Time and again, the BRZ