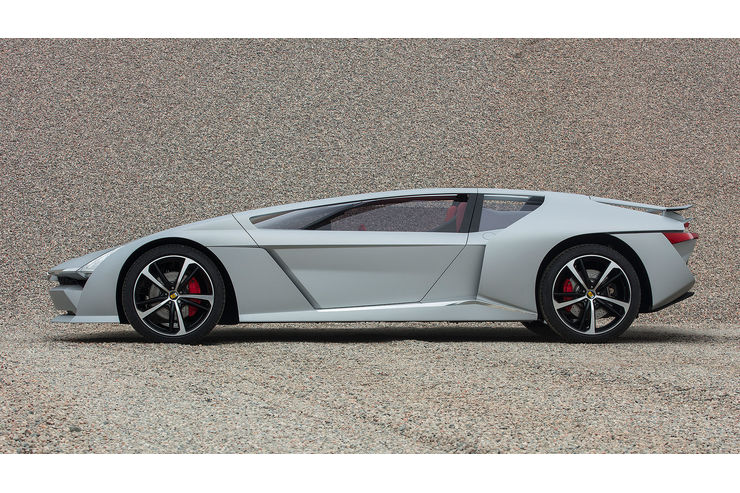 The Bandini Dora concept car from GFG Style is visually inspired by Formula 1 – but only by the halo system. The drive is electric, of course.

The outcry was great when Formula 1 introduced the cockpit protection Halo in 2018. The safety system’s aesthetics in particular were criticized at the time. In the meantime, however, fans seem to have become accustomed to the system, or at least the debate has largely died down. The Giugiaro team of car designers – consisting of father Giorgetto and son Fabrizio – apparently didn’t find the Halo bar so ugly after all. Indeed, the new show car from their GFG Style company, the Bandini Dora, shows inspiration from it.

Inspired by the Bandini racing cars of the 50s

Above the shoulder line, the Bandini Dora even looks as if father and son Giugiaro had combined both of the F1 protective elements under discussion – in addition to the halo, Formula 1 also tested a windshield called the “Shield.” The shape of the windows, however, borrows from another model: To the two-seater sports cars from Bandini Automobili, which were used in car races, especially in the 1950s. Hence the model name: Bandini Dora.

The Bandini racing cars served as a source of inspiration for the Bandini Dora.

Otherwise, however, there are not too many design parallels to be found between the prototype and the imitator. The newcomer is too big (4.80 meters long with a wheelbase of three meters, two meters wide, 1.15 meters high) and too angular for that. The headlights, which are pulled far back, the sharply jagged lines in the side view and the aforementioned halo struts, which run from the very front to the very rear and end in the rear wing, are striking. Here, the show car wedge, which was supposed to debut at the Geneva Motor Show, presents a rather jagged look with light bars running across the entire width.

You won’t find any exhaust tailpipes on GFG Style’s Bandini Dora. No wonder: the car is electrically powered. Two electric motors mounted on both axles produce 400 kW / 544 hp and deliver their maximum 680 Newton meters to all four wheels. A 90-kilowatt-hour battery supplies enough energy for up to 450 kilometers. Of course, this is only possible if the acceleration capacity (3.3 seconds from zero to one hundred) or the top speed (electronically limited 250 km/h) are not tested exuberantly. 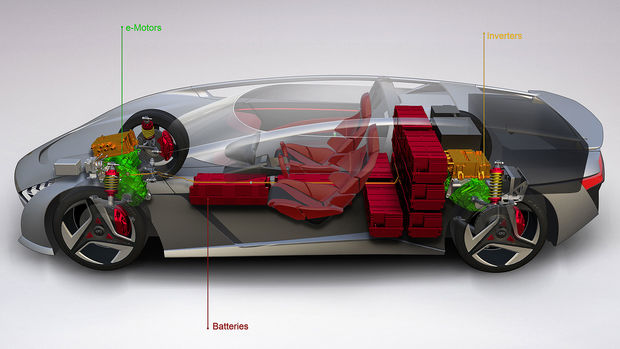 The electric motors are located on the axles, while the batteries are stacked in the center of the show car.

Like its show car siblings Vision 2030 and Vision 2030 Desert Raid (read more about these cars here), the Bandini Dora has a carbon body over an aluminum space frame. Four 21-inch wheels are suspended from the chassis and covered all around with 245/40 R21 Pirelli tires.

Interior without switches and buttons

Entry to GFG Style’s Bandini Dora is via fully automatic scissor doors. Inside, a raised center tunnel, elemental to the car’s structure, spans from front to rear, separating the two occupants. The seats, made of carbon and leather and slightly adjustable in seat height and back, are fixed, so the driver can find a suitable seating position with an adjustable steering wheel and flexible pedals. The infotainment touchscreen is located in the valance; the concept car has no switches or buttons. Instead, it has ambient lighting throughout and additional monitors that display images from the rear-view mirror cameras.

… are great sports cars that should be launched on the market as soon as possible.

… are superfluous cars that will hopefully never come onto the market.

Giugiaro considers the Bandini Dora to be the “Barchetta of 2020”. However, some viewers might feel reminded of the nineties when they see it. The visual link to the old Bandini models is also rather mediocre. And whether the halo analogy works is up to the individual to decide anyway.