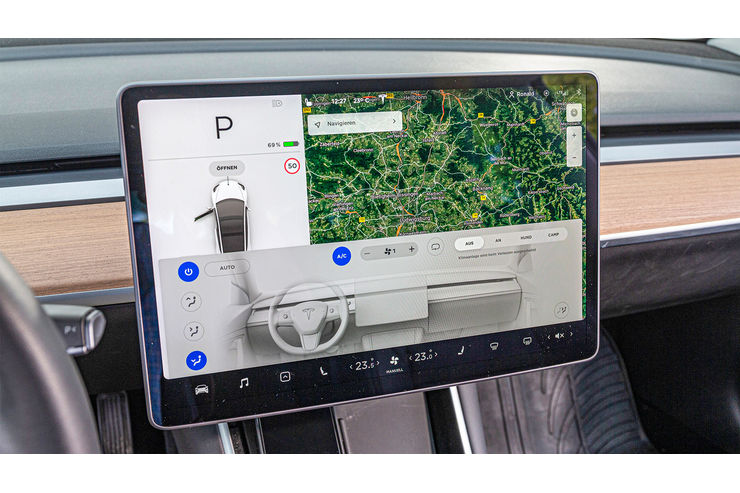 A representative survey by the car-buying portal mobile.de reveals reservations on the part of German drivers about operation by touch, gesture or voice control.

Tesla took the reduction of buttons, knobs and controls to extremes early on and largely shifted the entire operation of its models to a particularly large touchscreen. However, hardly any new cars from other manufacturers roll off the production line without a touch-sensitive display or voice and gesture control. The aim is to give cockpits a modern, minimalist look, but above all to ensure safety and comfort.

However, the majority of drivers prefer buttons and controls, or at least a combination of manual and digital controls. This was the result of a representative survey commissioned by mobile.de among a good 2,000 participants over the age of 18.

In the VW Golf 8, the volume control also works via touch slider.

Distraction from traffic events due to technical devices

Almost every second driver (47.3 percent) is distracted at least occasionally by technical devices such as a navigation system or smartphone while driving. While two-thirds (65.9 percent) of 18- to 24-year-old drivers say they are distracted while driving, only 37 percent of the over-55s say they are.

But even if voice control is supposed to ensure greater safety in the car: Only one in ten drivers (9.9 percent) would really welcome operation by voice commands. Almost two-thirds (59.6 percent), on the other hand, still prefer the controls to be operated entirely or at least predominantly haptically.

Pure voice control still a dream of the future

Only one in twelve car owners (8 percent) say they do not have any buttons, but only voice control or a touch display in their car. 61 percent of owners, on the other hand, do not have any digital operating systems in their cars – half of them (52 percent) clearly prefer haptic controls as well. Nevertheless, 57.6 percent of Germans do see advantages in a voice control system: Above all through the plus in safety thanks to less distraction (35.4 percent) and the simplification of the controls (16.6 percent). The more modern look of the fittings, on the other hand, can only convince 5.7 percent.

The survey did not include the operation of the windshield wiper. The adjustment of its interval function on the touchscreen of a Model S was the undoing of a Tesla driver on March 15, 2019. He went off the Bundesstraße 36, drove into an embankment and against several trees. According to the Karlsruhe District Court, this was because he “used the touch screen (touchscreen) permanently installed next to the steering wheel above the vehicle’s center console to set the intervals of the windshield wiper, which had already been switched on due to heavy rain. This was apparently as distracting as operating a cell phone or similar. The decisive factor is the duration of the averted gaze.

There is no such thing with voice control. But the majority do not trust the functionality of the technology (55.8 percent). Just under one in ten (nine percent) is concerned about data security and poorly protected technology in digitalized operating systems in the car.

According to mobile.de, around one in four used cars on the platform is currently equipped with voice control. In total, more than 1.5 million vehicles are for sale on the exchange.

The data used is based on an online survey conducted by YouGov Deutschland GmbH, in which 2,068 people took part from November 11 to 13. The results were weighted and are representative of the German population aged 18 and over.

Okay for cell phones, where the finger hits the target, but I prefer classic buttons in the car.

I find the intuitive operation of smartphones very easy and would like to have them in the car as well.

Touchscreens and voice control are familiar from smartphones. Nevertheless, fewer people seem to like it in the car. Perhaps also because in practice most have already found that operating touchscreens requires more visual attention than classic controls. This does not mean, for example, that selecting one of 256 colors for the ambient lighting is not a good idea in a menu on the touch-sensitive central display.

But frequently used or even safety-relevant functions can be reached more quickly and unerringly with real buttons and levers – just think of the turn signal or horn. Added to this is habit, which is also likely to play a role for many survey participants.

Presumably, a canon of residual buttons will emerge for functions that need to be operated quickly while driving. Voice control, which also understands everyday speech in modern systems and is getting better all the time, could also become a safe alternative for some. Its manageable rating is probably mainly due to experience with early versions.