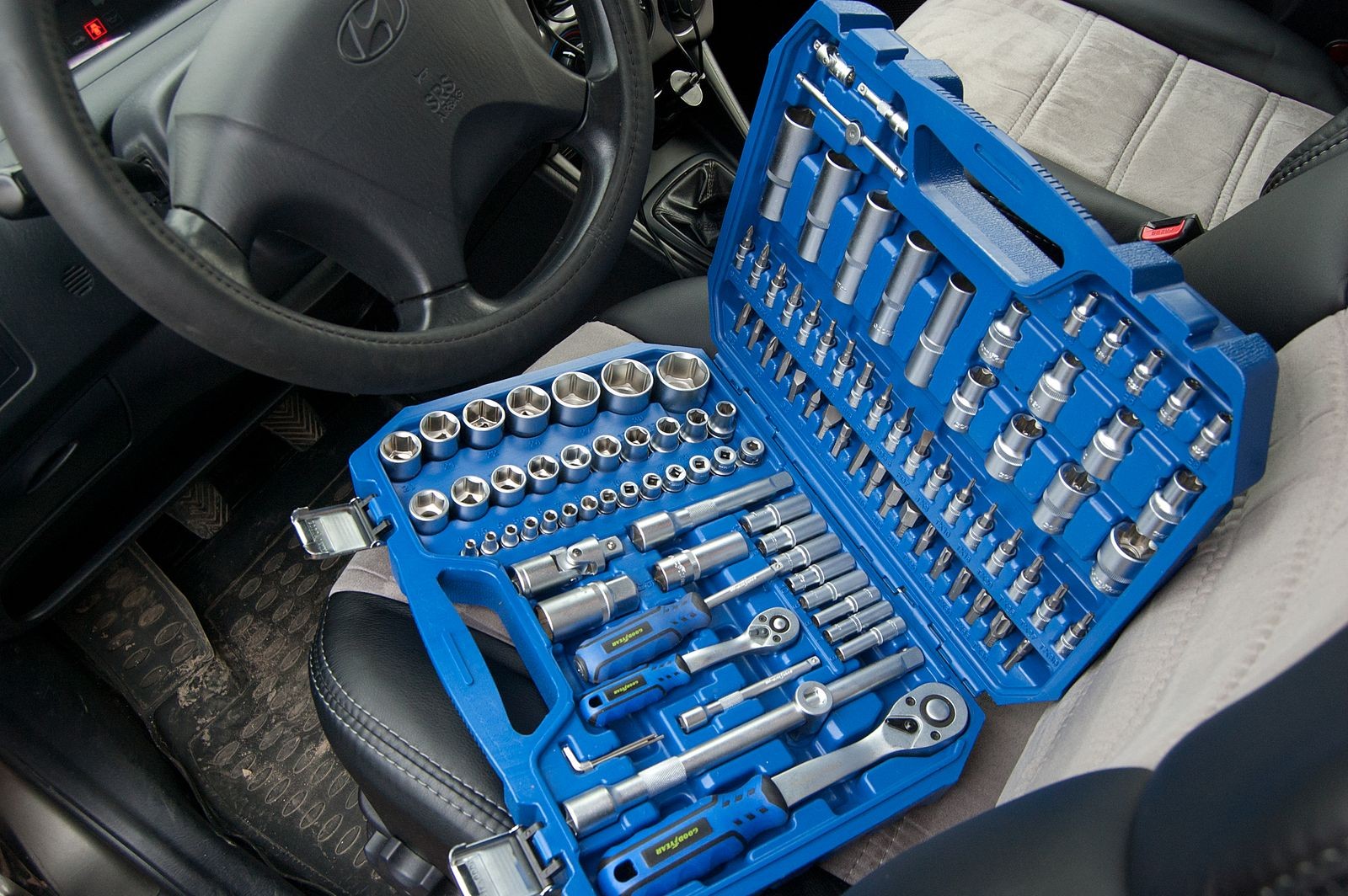 A bit of history

Let’s start with the definition of the Matrix body. Of course, it doesn’t look like a minivan. Nor is it a compact van. That’s why the Matrix is called a subcompact van. Opel Meriva is called one of the first subcompactvans, and the most popular, most likely, will be Nissan Note. Only the statement about firstness of Meriva is a little bit unfair: Opel appeared in 2003, and Matrix – in 2001.

Now a couple of words about the Italian nameplate. The Matrix was developed in Turkey, and Koreans wanted very much to win the European market with the Matrix. The design was entrusted to the atelier Pininfarina to make it for sure. Somebody may think that the bent side line is illogical, too impudent or unnatural, but we must admit, that the look grabs. For 2001 it is a bomb. True, later Pininfarina became more modest, and in one of the restyling the nameplate from the Matrix disappeared. It is not present on our 2009 car.

But we have Hyundai’s desire to keep up with themselves: during the 2008 restyling, the Matrix had a face drawn similar to that of the Hyundai i10. Amusingly, one of the service professionals where we went to look at this car noticed that the front looks a lot like the old Kia. In general, however Pininfarina tried, the Matrix still remained “Korean”. And what do people love the Koreans of that time for? That’s right, for simplicity and reliability. And they are more than enough in the Matrix.

The Matrix has had a few engines: two petrol 1.6-liter (103 hp) and 1.8-liter (122 hp) and three diesels (and until the restyling in 2005 the only diesel engine was a three-cylinder). The diesels are not found in the secondary market, so it is not surprising, that the engine is petrol. And the top one is the 1.8-liter.

There could be both automatic and manual gearboxes on Matrix. We have manual transmission. It has front-wheel drive, because the other one simply does not exist here.

The mileage of our car is 140,000 kilometers. Let’s take our good tool in our hands, drive it up to the elevator and see what we had to change during these kilometers, how much will it cost to maintain this car, what you should pay special attention to, and what you can save on here.

The 1.8-liter G4GB-G of the Beta II series is not a thing of the past and well-tested. I don’t know how happy it will make Matrix owners, but the car body would rather rot than the engine would fully work off its service life. There are still no problems with oil consumption due to a collapsed catalytic converter or plastinated cylinder walls. It has some characteristic sorenesses, but about them little bit later. First – standard maintenance.

The regulations suggest changing the oil every 15,000 kilometers. This is a lot, and it is better to reduce this interval to 10 thousand. It is the owner’s preference which oil to choose, any “non-paleoil” oil will do the job. Our car is not spared and the oil is not the cheapest – Chrono 10W40.

The oil filter can be bought, and it is not difficult. But you will have to unscrew it from below, so it is easier to change the oil either from a pit, or on a hoist. If you have neither of them (and still have no desire to lie under the car on the ground.

You can change the air filter yourself. There is nothing complicated here, you even don’t need a screwdriver: unscrew the catches, take out the old filter and put in a new one. Everything is very simple.

Now for something more expensive: the service belt (aka accessory belt) and the timing belt. Let’s start with the second one. The timing belt should be replaced every 60,000 kilometers. You should not delay replacement: belts are rather delicate, and they are not always able to run over their measured by manufacturers resource. For 60 thousand – no questions, but further at your own risk. The risk is rather great here. More than the risk. The cost of replacement is not too high:

Replacement of plugs on this engine is a simple operation. The coil is the only one, there are only wire lugs on the plugs. The only detail that overshadows this beloved process for many is the need to unscrew the decorative cover bolts. But it’s not difficult, it’s worse when you have to remove the manifold.

Now let’s move on to the engine’s sore spots. Most of all, Matrix owners don’t like its vibration. Unfortunately, this is a peculiarity of the engine, and nothing can be done about it. To tell the truth, sometimes the situation is aggravated with collapsed engine mounts. Sometimes it is necessary to change them. And here is the case when economy can come out on its back: cheap supports usually serve even less than original ones. It is better to spare money for a good detail.

Another small problem is the sensors, which can sometimes refuse to work on their own. On this car, for example, the detonation sensor was replaced. It costs about 1,500 rubles, and the replacement costs 1,000.

Otherwise it is a very good engine that with normal care will run 300K or 400K. And maybe even more – depending on how to look after it. Telling the truth, it will be good to service a storage battery before winter. Check the terminals, density of electrolyte and, if necessary, charge it up to the necessary level. If you plan frequent, but short trips to work in winter, recharge the battery at least once every couple of months. So if you do not have a good charger, it’s time to think about buying one. The question arises: why exactly these chargers from Goodyear we called good? It’s a fair question, so we’ll answer it. These chargers are called “smart” for a reason: they have a multi-step process of operation, thanks to which the charger not only charges the battery, but does it gently. And it also checks the battery’s ability to hold a charge. Of course, there’s protection against polarity reversal and short circuits. It’s impossible to kill a battery or start a fire with this charger, which in the age of humanitarians, bloggers, and managers is especially valuable. Of course, to deal with the charger is easy: it will show everything you need either by the indicator, or displayed on the LCD (if available). And when it will charge the battery fully, it will start the storage mode itself. There is no need to monitor the work of the charger, it will do everything by itself. This is the end of the commercial break and let’s go further – to the elevator.

The transmission has a minimum of questions. The manual gearbox, CVTs, and shafts work for a long time and do not cause any problems. Of course, with age you will have to replace the clutch, but it is not too costly. Even if you have to replace it completely, you can buy the whole set of Valeo. Of course, you can break even on Luk, but it will cost much more – from 12 thousand. Replacement costs about 6 thousand.

And what needs attention is CIA dust shields. They tear easily, and a torn dust cap, as you well know, very quickly leads to forced replacement of CIA. Therefore, the dusters should be checked regularly and replaced at the first sign of damage. The outer CV joint dusters have already been changed here. But, if anything, they cost two thousand a side to replace, and the dust cap itself.

No questions about the brakes, either. Somebody bent the edge of the disc protector on the left front wheel for some reason, but it doesn’t affect the speed. It also looks like the caliper guide on this wheel is stuck – we couldn’t move it by hand, it’s fixed. Well, let’s see what happens with pad wear. Nothing is noticeable on the run yet. But in general, calipers on Matrix can get stuck quickly, so every time you change pads they should be cleaned and serviced if possible.

Replacing the pads both in the front and in the back is an elementary operation, and there are no tricks. It does not cost much, but the cost of the pads can vary – from one thousand rubles to three and a half. However, there is a choice, so it is easy to pick up pads.

The same applies to the brake discs. The original ones cost an impertinent amount. Search and find.

It seems there should be no surprises here. But there are. Firstly, not the most expensive and frankly speaking not the newest Hyundai has multilever suspension. Secondly, this suspension is not immortal. Now the diagnostics has shown that there is nothing wrong with it (almost everything, but about it below). And that’s not surprising: not too long ago they invested a good chunk of money into the front suspension alone. Let’s look at what exactly this pile has gone for.

So far, the rear suspension is fine. Except for one, but a big part – the beam of the suspension, with which the arms are attached. I poked my finger in it and accidentally broke off a piece of the car: this beam is corroded through. The sad thing is that it rusts on everyone, and it’s hard to find it at a salvage yard. A new one costs 8400 rubles, which, in principle, is not so expensive. While the beam is still holding, but you still have to replace it.

To be honest, I expected to have to look at a car with a problematic body. The Matrix, unfortunately, knows how to rust. But I was wrong in my gloomy expectations: care really does work wonders: the body of this car has been preserved very well. There are, of course, some problem places (first of all the fifth door and fender arches), but for now the situation can be corrected by local underpainting.

In general, there is nothing to do with the body yet. But one would like to do something, don’t you think? Therefore before coming frosts (they will come surely some day) it is possible to treat rubber seals with silicone grease.

It is also necessary to replace wiper blades, and to treat glass with antifreeze. And it will get dirty less, and the resource wipers will save. Well, to kill street lovers with beauty of Matrix, it is possible to treat tires with blackener. By the way, except for jokes: your tires will not only look better, but also will get quite tangible protection from road reagents and ultra-violet. So the advice is very practical.

Appreciation of Matrix is obviously more: not bad in the sizes of interior, rather decent dynamics with the engine 1,8 l and quite budget cost of service. The main thing is to find more or less alive car. Today they become less and less, and our Matrix is a pleasant exclusion from the sad rule.