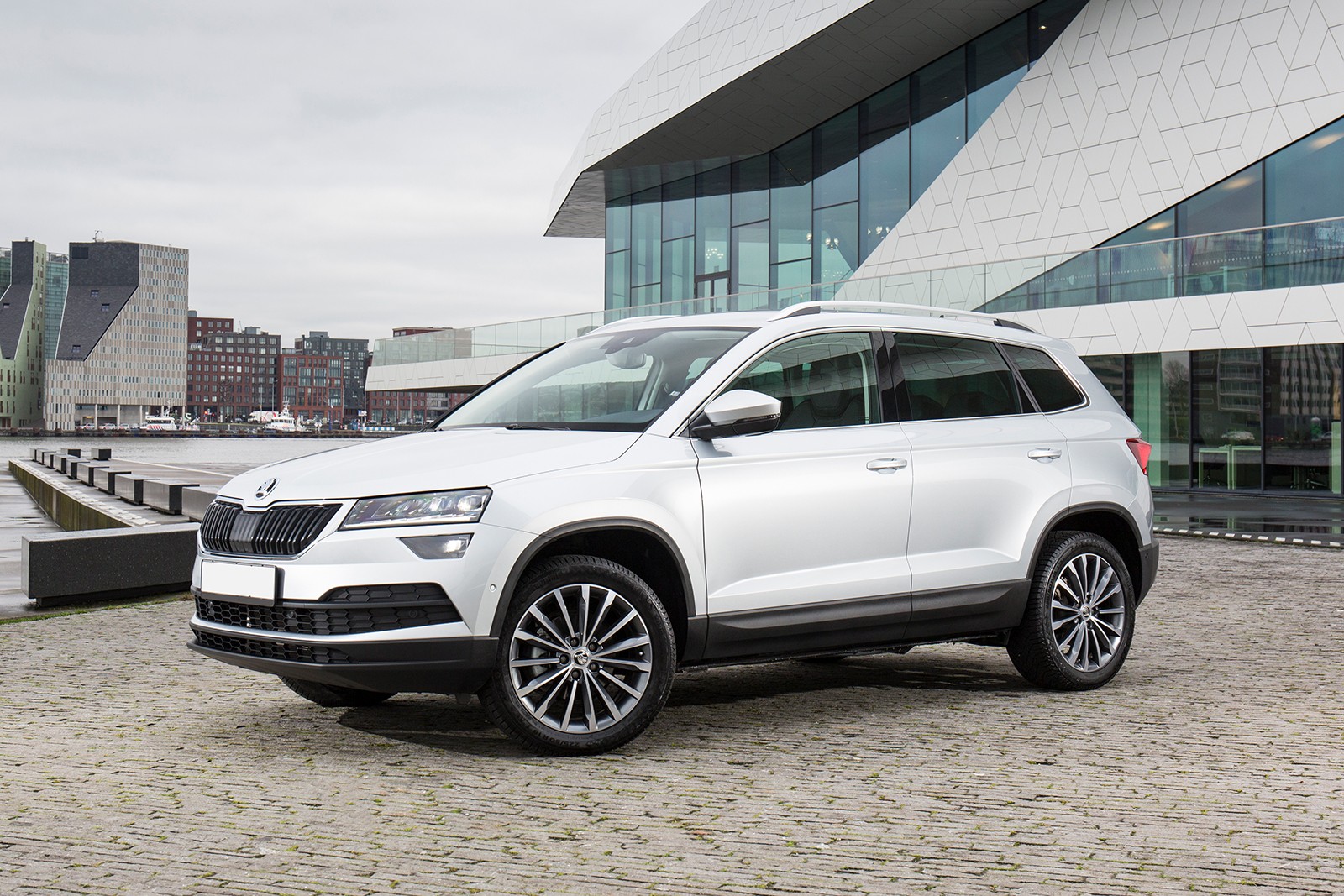 1. Let’s start with your hobbies. Are you going hunting on a day off or going to karaoke?

The platform of the passenger car Ceed does not offer a four-wheel drive version, so fishermen and hunters should pay attention to the Niv… That is on Karoq, which is offered not only in a mono-drive variant. But Iksid can brag of good ground clearance – from 172 up to 184 mm depending on wheels.

In addition to the version with a drive on the front wheels, Karoq is also offered in a 4×4 version, which is understandably better than the front-wheel drive Iksid in terms of passability. However, even in single-wheel drive version Skoda’s electronics will try to imitate blocking of interaxial differential, “holding” a slipping wheel. But the value of ground clearance on the Russian site and in the catalog Skoda for some reason bashfully does not specify. May be because of the fact, that real measurements give only 165 mm from protection of internal combustion engine, entering into the package of bad roads? By the way, it is not on the “Europeans” with their claimed 172 mm and 176 mm clearance for the versions 4×2 and 4×4, respectively.

2. Are you from the generation of people who had their own sound system at home, or from those whose first phone had no buttons?

It’s for Generation Z: in Premium and Premium+ configurations, the Korean hatchback is equipped with a fully digital dashboard Supervision with a 12.3-inch TFT-display. The theme of large screens is supported by a 10.2-inch touchscreen multimedia system with navigation, which can be connected to the Internet via a smartphone using a Wi-Fi module.

One of the highlights of the Czech crossover’s interior is the LED backlighting, the color of which can be chosen based on your own mood or preferences. Luminous stripes on the dashboard and doors – this is not a new word in the automobile industry, but in cars of this class and price category the option is not common.

3. How much you are a conservative person?

No compromises: in addition to exclusively turbocharged power units of 1.4 liter (140 hp) to 1.6 liter (200 hp) Xceed is offered only with non-alternative seven-speed DCT robot transmission with two clutches. In general, if you are an adherent of the decisions checked up by decades, you have no chances here.

The front-wheel drive Karoq in our robotized century leaves a loophole to fans of traditional automatic transmission, giving the chance to jump on a step of passing away “hydro-mechanical train”. Besides there are eight steps in automatic transmission of Skoda that is still quite modern. Well, four-wheel drive versions are equipped with robotized “six steps” DSG with two clutches.

4. Muscovite test: what is your attitude to curbs?

“Paper” ground clearance of 172 to 184 mm is also confirmed in practice, and the angles of approach and departure in real measurements are 18 and 27 degrees, respectively (the manufacturer itself does not specify these parameters) – that is only slightly worse than the Karoq. But in a top complete set the 45 % profile of 18-inch tires with 235 mm width of tread will force to treat curb ramps with caution.

Up to the bottom point of Karoq, despite its crossoverness, there is only 165 real millimeters of clearance. Nevertheless, the car has quite good angles of entrance (18,4° front and 18,7° rear), and measurements are even more encouraging – 20° and 29° respectively. Therefore one should not be afraid of curbs on Karok, especially as dimensions of tires leave more “buffer zone” on wheels, than in XCeed.

5. The hostess test: if you buy a washing machine, will you go for it yourself?

In spite of the fact that the distance between the axles of Kia (2650 mm) is 12 mm more than Skoda’s, the space in the back seat of Ikseed does not shine, and strongly drooped fifth door hints that 426 liters of boot space (1378 liters – with folded seats) are more useful for packages with groceries from the supermarket, than for carrying home appliances and other “oversized stuff”.

Almost the same, as at Kia, 500 liters of useful volume of a trunk according to VDA methodology in “up to the rack” variant is potential 1609 liters, which are possible to receive, having folded the second row. In addition with shorter wheelbase (2638 mm) the Karok offers more space for rear passengers. Well and more vertical rear window will allow you to keep in spacious womb of Skoda even a TV set and the washing machine.

6. Take a hit – it’s cheaper: how do you feel about promotions and sales?

An “entrance ticket” into the world of Kia pseudo-crossover costs 1,519,000 rubles – the initial complete set Luxe which is deprived of the majority of systems of the driver’s aid, and also heating of seats and a windshield. But the separate climate control and LED headlamps are put to Iksid “by default”. But in the maximum options (Premium) the price list of the car becomes rather “premium”, getting over the mark in two million roubles!

It is a rare case when the Czech car from Nizhny Novgorod turned out cheaper than the Kaliningrad Korean – the price for the Karoq starts from 1,453,000 rubles for the Active version which has a minimum of comfort and safety systems. The air conditioner and halogen headlights will give way to dual-zone climate control and LEDs in richer versions, the price tag of which “dances” around 1.6 million. A top-of-the-range all-wheel-drive Karoq Style will cost 1,829,000 rubles – which is noticeably less than the price for a 200 hp all-wheel-drive Exceed (2,079,900 rubles).

7. And how do you feel about fighters for ecology?

Iksid all good with environmental friendliness: the engine meets the standards of toxicity of emissions of Euro-5, and the content of CO2 in the mixed cycle (149 g/km) the exhaust of 1.4-liter version is only slightly “dirtier” than that of Skoda with its 146 g/km. However, Kia has no start-stop system, which allows saving a glass or two of petrol in a city and making the world a little bit cleaner. But near a gear stick there is a button of choice of a driving mode DMS, which “aggravates” the reaction of the car to movement of a gas pedal.

Driving Mode Select is the name of Skoda’s driving mode option that provides several presets of engine, steering and automatic transmission – from “ecological” to “sports”. Karok’s CO2 emissions in the mixed cycle are a couple of grams cleaner than those of Kia, but here also the start-stop system will kill the engine in traffic jams, saving fuel and additionally protecting the environment.

8. Thirst for speed: have you ever tried to leave a traffic light first?

Standard-wheel drive 1.4-liter Xceed from 0 to 100 km / h is almost a second slower (9.5 seconds) than the analogous Skoda Karoq (8.8 seconds). But with more powerful 1,6-liter unit of two-hundred horsepower Kia gains “hundred” only for 7,5 seconds, not leaving Czech crossover any chances in traffic lights battles. Certainly, if a road is dry…

One hundred and fifty “horses” under the hood of Karok provide it excellent dynamic characteristics: in order to change the first hundred car will need less than nine seconds, and up to 200 km / h front-wheel drive version falls short of literally 1 km / h. However, 200 hp version of Iksid can accelerate up to 220 km/h, and the 1,6-liter “Korean” will be the first to leave a traffic light on a dry summer day.

9. Do you visit provinces?

Alas, “temporary” instead of full-fledged spare tyre is typical both for Kia, and for Skoda. But almost two hundred official dealers of the Korean brand cover practically all the territory of the Russian Federation, including the periphery. Well, and a longer warranty (5 years or 100,000 km) may also be interested in the inhabitants of the backcountry, who are used to drive a car happily ever after. But to save money on fuel, coming from the turbocharged engines Xceed will not work – only “ninety five”!

About 120 official dealers of Skoda is good, but it is noticeably less than Kia with its almost two hundred of official representatives. Yes, and in terms of warranty duration (3 years or 100,000 km) Skoda is more suitable for those who are used to follow the car fashion and regularly update the car park, which is more typical for residents of large cities. However, if you want you can drive in Skoda wherever you want – remembering that instead of a full spare wheel it has the same “dokatka”, as well as in Kia, and in the tank you should fill gasoline with octane number not less than 95.

10. 10. An unexpected question: how do you pronounce the name of the company Xiaomi in Russian?

The Ixida multimedia system works perfectly with both “iPhones” and Android smartphones thanks to Android Auto and Apple CarPlay technologies. However, someone will care that the traditional type of USB-A connectors will allow you to connect any gadget, including the most ancient, without any adapters without any problems.

Owners of smartphones of the Chinese company Xiaomi (yes, yes, it reads “Xiaomi”) have long been accustomed to the standard USB Type-C or USB-C, as it is also called. It will force many Karoka buyers to get adapters to connect their Android or iOS device thanks to the Smartlink feature.