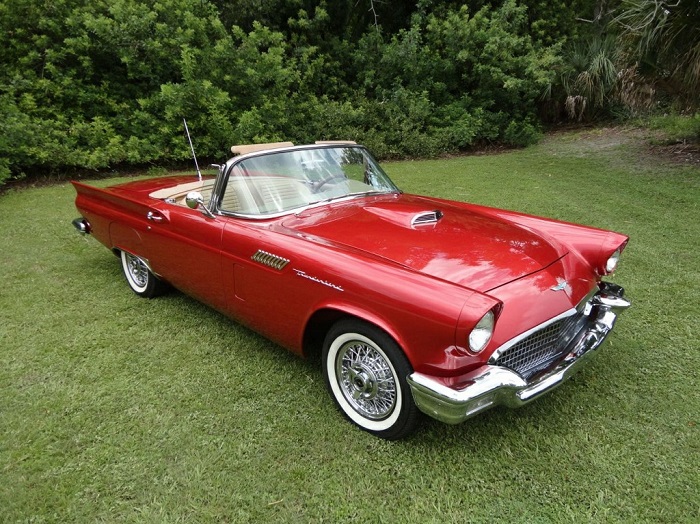 Most of the vehicles wheeling around the roads of the modern world can’t boast anything exceptional. They simply carry out their main mission, providing convenient communication, and then exit the market after a while. But models are born from time to time, which become significant milestones in the annals of automotive engineering, changing the course of history, implementing technological breakthroughs or establishing new canons of beauty.

These masterpieces of the 1950s are so well designed that they are still considered some of the most beautiful and successful cars ever made. Take any of them out on the road today, and they’ll attract more attention than a million-dollar supercar.

It’s not just a rare German classic from the ’50s, but one of the greatest cars of the entire 20th century, a technological and stylistic work of art. Born to be the coolest production racing car on the planet, the 300SL Gullwing has built its reputation on the street and on the track alike.

Based on the Mercedes W194 that dominated the 1952 Le Mans race, it created a sensation at the 1954 New York Auto Show and later served as the inspiration for all production Mercedes SLSs.

The gull-wing doors made this two-seat coupe stand out, making it a coveted piece of engineering genius for many. What’s more, powered by an innovative 215 hp six-cylinder engine, the breathtakingly light Gullwing was capable of flying at 155 mph (250 km/h), whereas not many people could hit the 100 mile limit in those days.

With a number of innovations, including the first effective use of direct fuel injection technology, the 300SL became the quintessential automotive era of the 1950s and is still considered one of the best examples of engineering in automotive history.

Elegant in appearance and equipped with almost every available option, this award-winning Oldsmobile was the company’s flagship and a true masterpiece of the fifties.

A huge, luxurious post-war convertible with seductive forms and gorgeous stainless steel trim, it is considered by many to be the gold standard of its era and an icon of American urban style in the ’50s and ’60s.

Mention of any Caddy model conjures up a vivid, concrete image in our minds – much to the credit of the Eldorado. The epathetic convertible was the quintessence of grace, energy and beauty – with long, sprawling, pretentious styling, a powerful V8 engine and a myriad of luxurious touches inside and out. Not without reason, Elvis considered the Eldorado one of his favorite cars.

The 1954 model was the first to use a standard factory body instead of an earlier, more unique sheet metal design. But what it lost in character was compensated for by a significant increase in sales.

The line became one of the longest-running in the world, and the classic 1954 Cadillac Eldorado is the main reason for its amazing survivability.

The merits of the MGA sports roadster far exceeded its cost. In its price range, it was impossible to find a car as comfortable, efficient, and attractive, and in its polished handling and bright, impetuous design it was virtually unmatched.

British craftsmen did their best, making the model not only beautiful, but also durable: until now, there are many such cars on the world market, in full technical condition or in need of only minor repairs.

Aston Martin sports cars are known for their dynamic superiority, but the DB4 dominates all other models. It is a perfect example of the classic style of the 50s.

A spectacular new development was unveiled in October 1959 at the London Motor Show. Featuring a shorter chassis, a boosted engine with three Weber carburetors and a streamlined shape, the GT, perfected by Zagato craftsmen, was designed to feel equally comfortable on both the regular road and the racetrack.

Lighter and more powerful than the standard DB4, it was the fastest road car in the world when it first came out, and to this day it is considered one of the most valuable and beautiful gems in the Aston Martin collection.

The sleek luxury T-bird was unveiled by Ford at the 1954 Detroit Auto Show as a response to rival Chevy, which had created its first Corvette the year before.

The car was positioned as “a luxury liner for wealthy owners,” but with its sleek, aerodynamic styling and powerful engine options it could easily rival sports cars.

The 1957 version showed attractive changes in both aesthetics and performance. With its magnificent V8s (the most interesting were the 245 hp five-liter and its 300 hp supercharged counterpart) it could reach speeds of up to 240 km per hour, which is very good for the 1950s. Especially if you consider the one and a half ton weight of a luxury convertible, equipped with an outstanding for that time set of amenities.

In the second generation (1958-60), Thunderbird has undergone a more radical upgrade (incidentally, it drove the flamboyant heroine of the movie Elvira – Lord of Darkness), but the model in 1957 remains one of the most exceptional and stylish cars of the mid-20th century.

This roadster, though very beautiful, took a toll on BMW. Powered by a marvelous 3.2-liter V8, it was intended for the U.S. market to compete with the incredibly fast Mercedes 300 SL. But it turned out to be too expensive for buyers there ($9,000 – twice the price of a Thunderbird or Jaguar XK150).

As a result, the total production volume was only 252. This resulted in heavy financial losses for the Bavarian automaker, but subsequently played into the model’s hands: thanks to its rarity, it became a coveted catch for collectors. Many consider it the most beautiful European car of those times.

This nimble sports car was a resounding success in its category. Relatively small, with a new generation chassis, a hand-forged aluminum body and a 2.0-liter 170-horsepower six-cylinder under the hood, it was designed and built with the sole purpose of challenging Ferrari, Jaguar and Mercedes-Benz on the iconic race tracks of Europe and the world.

In 1953, the manufacturer updated its gem, known as the A6GCS, and named the model “Sport 2000.” But the name did not stick: because of similar characteristics, people continued to call it A6GCS, only at the end adding the production version – “53”.

The production was limited to just 52 copies: Four stunning low-roof coupes were made by Pinin Farina, the other 48, in the form of racing spiders, by Fantuzzi.

Be that as it may, it was the A6GCS/53 and related models that brought Maserati back from the crisis. No wonder they succeeded, with such sleek lines and stunning dynamics.

The Corvette C1, which was the American answer to the Italian-British roadsters of the 1950s, was the graceful two-seat Corvette. True, the gorgeous fiberglass body sitting on a sturdy steel frame didn’t have the most capable 150 horsepower engine.

Active sales started only three years later, when 265 hp V8 was placed under the hood. But even the first models managed to excite hearts of commoners – if not with power, then with simple and graceful beauty. Today, the 1953 version is considered one of the rarest Corvettes, as Chevy built only 300 examples.

This Porsche was unique in every way, from the shape of the body to the underpowered but super-efficient 110 horsepower engine that allowed the 3.7-meter roadster to run at 220 km per hour.

The 550 had a lot of interesting technical features, thanks to which it quickly gained dominance in the 1.1 and 1.5 liter classes. The Spyder flying down the track looks simply magical: its impeccable sporty style, further developed in the Porsche 718, had already become the dominant design for top-level racing cars by the mid-1960s.