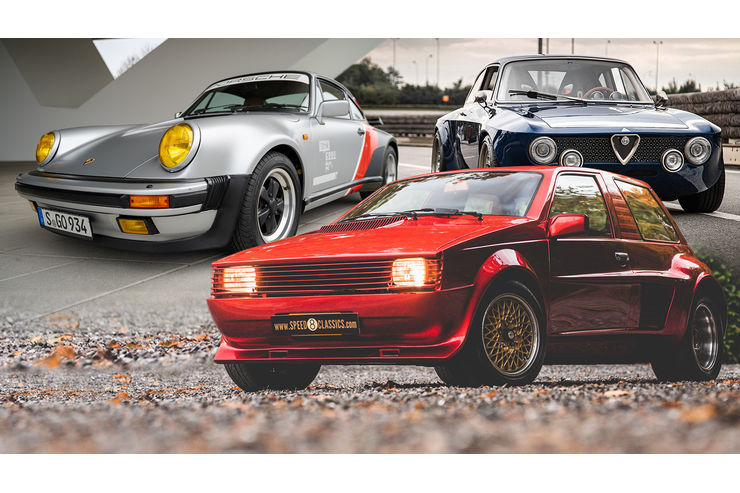 Even though the corona virus has turned our everyday working lives inside out, one or two absurdities have come our way. Precisely because the automotive industry is going through a period of upheaval, a lot of things are being spun around, tried out and ventured. Normally, such experimental objects are shown at trade shows – but there were none in 2020. But it’s not just brand-new, glossy concepts that have left us wondering. You can find out here which weird vehicles have impressed the editors the most.

You may not know this, but “Cyberpunk 2077”, a particularly eagerly awaited video game, hit the market in December. One that I’ve been waiting for, too, because I kind of like dystopian game worlds. And then this: shortly before the release, I have the opportunity to drive a car – no, a one-of-a-kind – that also exists in this game. Porsche rebuilt an old Turbo based on the game developers’ design, and the result really blew me away. That being said, a lap in this classic sports car was a long cherished childhood dream of mine. 2020 wasn’t all bad after all. 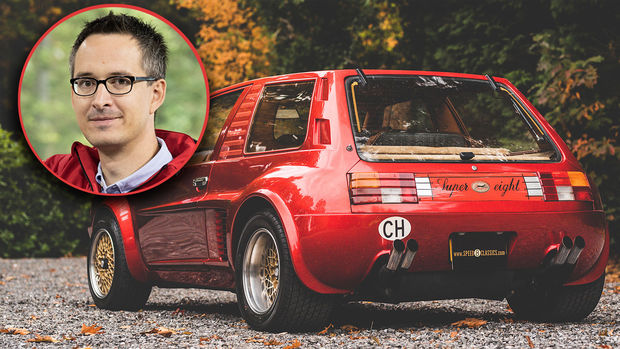 Many would probably answer how a Ferrari 308 could be improved: not at all. And they would be right. But they don’t know the Sbarro Super Eight. It is definitely not more beautiful than the Ferrari – and not more inconspicuous either. But it looks much funnier, has the Quattrovalvole V8 and a Dutch road registration. Where else would you find grilles in front of the headlights, such wide wheel arches and the whole look of a comic car that looks like a cross between an R5 Turbo, VW Golf I and AMC Gremlin? After all, there are enough serious cars out there. 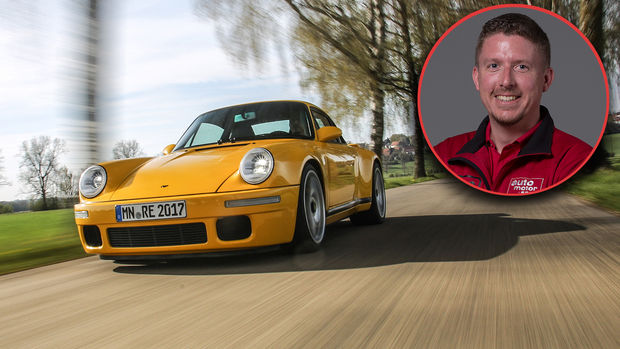 Excuse me? I only get to choose one?! The Claas Xerion 5000 would have deserved it, because it is packed with impressive technology right up to the top tread bars of its 42-inch wheels. But it only goes 60 km/h. And a riding mower is already too big for my garden. The Mercedes 209D Marco Polo would have deserved it, because it so wonderfully combines the fading era of Pril flowers with the dawning era of cheerful brown tones, and offers the best Franz Meersdonk flair this side of a Class 2 driver’s license (no idea how to convert that to euros). In the end, it’s the Ruf CTR Anniversary whose impression is the most unshakable. Because of its power of 710 hp and the force of 880 Nm? Yes, also. But above all because the analog sports car shines brightest in the unmanageable sea of lights of 911 restomods, because it is not a restomod. The 1.3-ton CTR just looks the part and achieves a level of perfection that rebuilt 964s will probably never reach. And it drives. Oh yes, it drives. My goodness, how it drives! 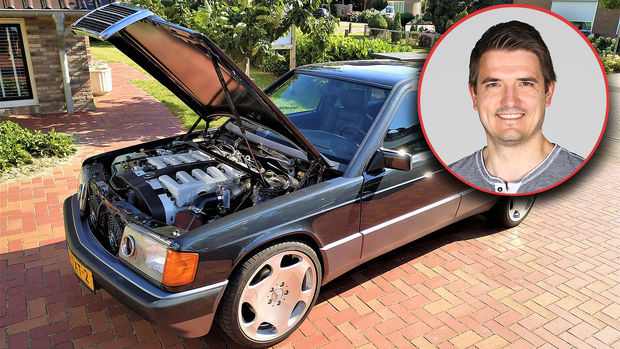 I once had a Mercedes 190 E myself; a bright red two-liter with 122 hp and accountant equipment. It was always reliable and not at all slow and unsporty. In short: I loved it. That’s why I first had this “What’s all this nonsense about?” reflex when I heard about Johan Muter’s project: The Dutchman actually planted the six-liter V12 from the Mercedes S 600 (W 140) in the 190 Bug. This “WTF” moment was quickly over, however, when Johan Muter explained to me how extensive the conversion ultimately was. If you watch his Youtube videos, you quickly get an impression that everything was thought of. In the meantime, the car is finished and for sale. I can’t afford it. But I’d love to take it for a test drive to see how 424 hp and a maximum of 585 Newton meters feel in a baby Benz. So Johan, how does it look – can you do anything? 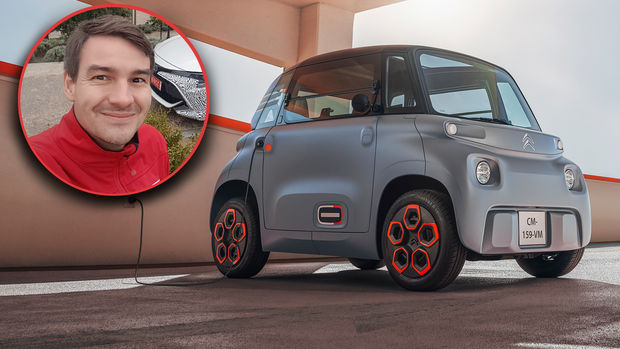 No, the Yank is not really a car at all. But the covered electric quad can steer teenagers through the city at top speeds of 45 km/h. That’s exactly where it belongs. And that’s exactly where the electric cube with its clear dimensions, well thought-out space concept and up to 75 km electric range belongs. Its price: at least 7,000 euros without local subsidies. 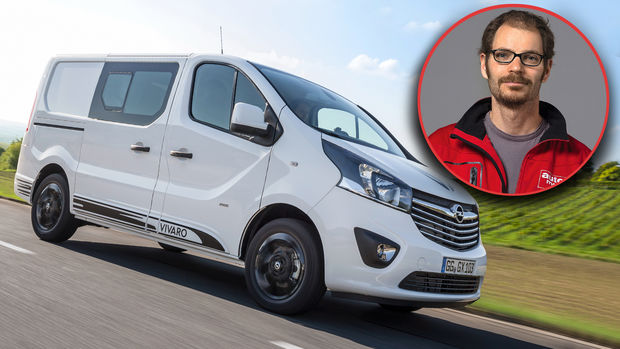 They developed it at Opel just for me, didn’t they? After all, what car could transport all my everyday needs better than the 5.40-meter double cab? It has two rows of three seats at the front – so I can fit my whole family in there. And the two sliding doors make it so easy to lift the little ones in and buckle them up. And then there’s the luggage compartment in the rear. Two meters long, almost forty-one wide. You can fit all your luggage in there. And that’s what I mean: a complete set of vacation gear for six people, plus a bike. And when all that was put in the rear garage, our youngest asked if she could still take her play horse with her. Play horse, that sounds cute, but it’s bigger than she is. But yes, it too can come along. For another story, I put a mattress in the back, because it fits right in – so the double cab is also a camper. And the 177-hp two-liter turbo diesel is in a hurry. And the fact that it looks so, well, stubborn in the wine red of the test vehicle also has an advantage – no one is jealous of the Vivaro Double Cab. Many people rather regret that they can’t afford something more attractive. Well, they just don’t know what they are missing. 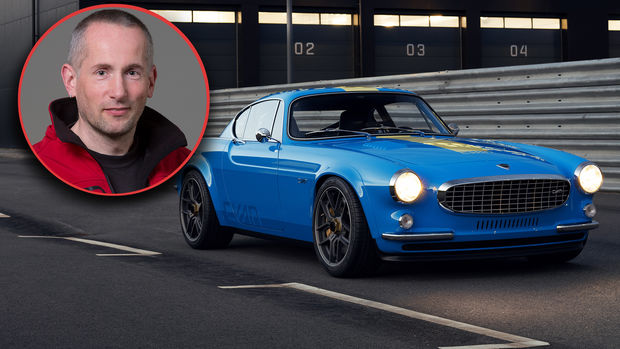 What Volvo’s Cyan racing department has put on the wide tires with the P 1800 Cyan is a really impressive restomod project for me. Visually, the P 1800 remains more of an underdog – sporty, yet restrained. Underneath the sheet metal, it’s quite the race car. It squeezes 426 hp and 455 Nm out of its two-liter, four-cylinder turbo. They have to contend with a weight of just 990 kilograms. Okay, it also has one very big disadvantage. It is said to cost a whopping 500,000 euros. 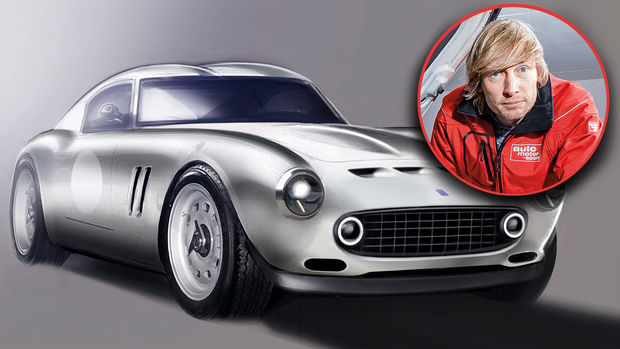 GTO Engineering. There have already been a few ideas and projects on this subject. Maybe this time it will work out with a modern GTO in the look of the very first one in small series – and not only as a unique piece of Ferrari. 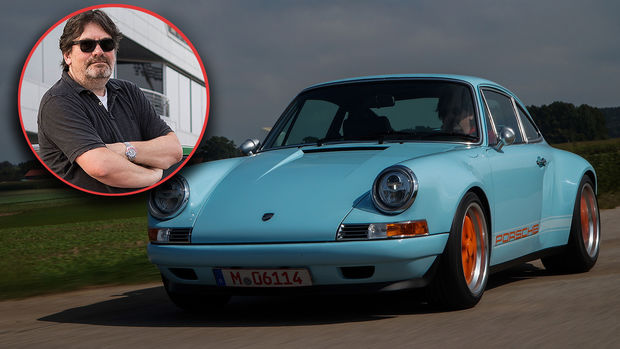 There are many companies that restomodify 964s, backdaten, whatever you want to call it. The Lightspeed Classic specimen I was allowed to drive impressed with its stylish, minimalist design, a magnificent and powerful 3.8-liter naturally aspirated engine, and a cleanly tuned chassis. Of course, one can invest considerably more money in the conversion of a 30-year-old Porsche, but to what end? 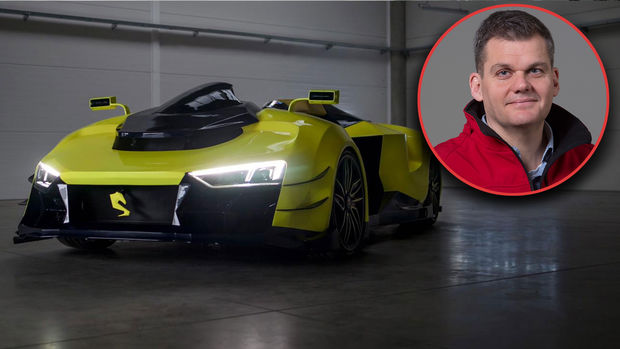 Actually, I don’t find quads very attractive: Four (mostly free-standing) wheels, but handlebars from a motorcycle, high center of gravity, but no lean angle – visually questionable, driving dynamics rather unfavorable. But if that’s not enough of a curiosity for you, you should take a look at the Engler FF: Visually no less questionable, but at least with clad wheels – of a Lamborghini Huracán. The engine also comes from that. But because a quad is not a three-wheeler, it also needs four-digit horsepower numbers and the V10 a power boost, Engler apparently thought. Voilá: The FF has 1,100 hp. Driving dynamics should be unquestionable, and there should be no shortage of questionable handling. Curious, isn’t it? 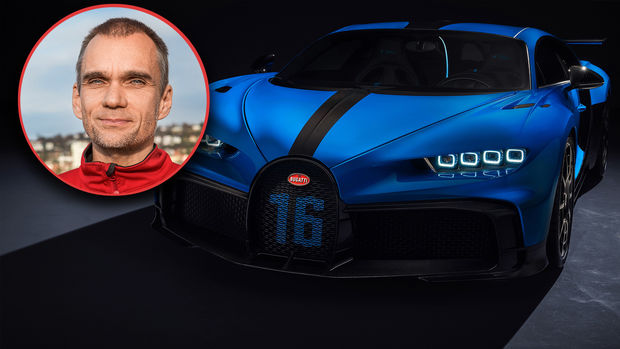 Yes, no, that’s clear. Bugatti, then. Excuse me, but a W16 with eight liters of displacement and four turbochargers is and remains simply – well, what, actually? Impressive? Fascinating? Surprising? Everything. Above all, how the engineers manage to serve you 1,500 hp and 1,600 Newton meters in such a way that it’s always a pleasure. And no ride on the blade, even when the track is soaking wet. The machine will golf its way to the supermarket or make you lose your hearing and sight. The right pedal makes the difference. And you’ll never forget the sound of the engine. Never! The way the beast breathes, hisses, turbocharges and blows off. Crazy. The company has shown what it can do when it really wants to. Especially when someone wants it. With sporty greetings to heaven, dear Ferdinand. 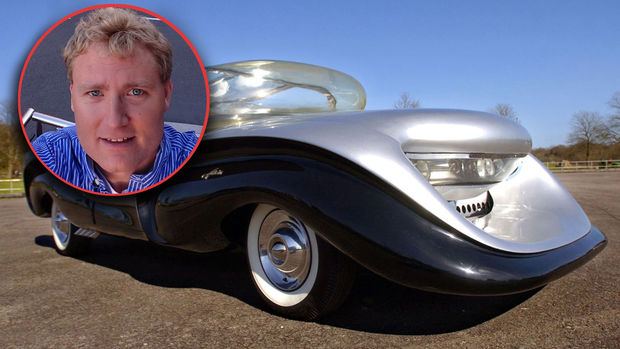 Pedestrian protection, padded dashboards, seat belts, safety steering columns and side impact protection – terms that have become indispensable in today’s automotive industry. Since 1991, Volvo, for example, has been making side impact protection its own banner under the name Side Impact Protection System (SIPS). Only very few people know that a priest installed an admittedly quite rudimentary side impact protection system in his then “safest car in the world” as early as 1957. We are talking about Alfred Anthony Juliano and his Aurora Safety Car. 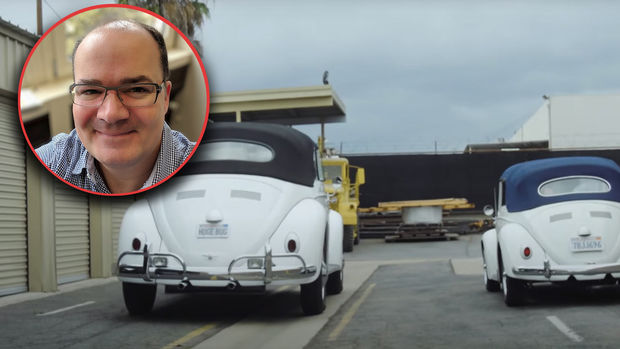 I’m certainly not the world’s biggest VW Beetle fan – but I do like the world’s biggest Beetle. Scott Tupper from California has a knack for enlarging even the most complicated curves to scale – you can see that in his Beetle, which has been enlarged by almost half. And because the basis for his conversion is a Dodge truck, there’s even air conditioning, climate-controlled seats, power steering and power windows. Nevertheless, the now spacious interior looks just like the original. So from California comes a really good Beetle. 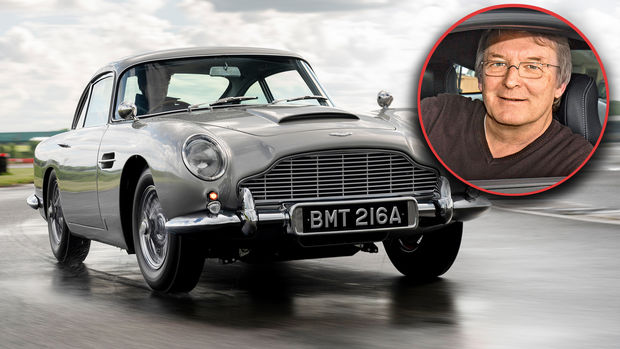 James Bond fans know the DB5 from seven films in which 007 saves the world in the end. Rotating license plates, smoke machine, bulletproof shield, ejector seat for the passenger. Madness. Now the English are building 25 new editions, equipped with most of the gadgets of the movie car. Totally gaga, not only because of the price of more than 3.1 million net. Because the car cannot be registered. 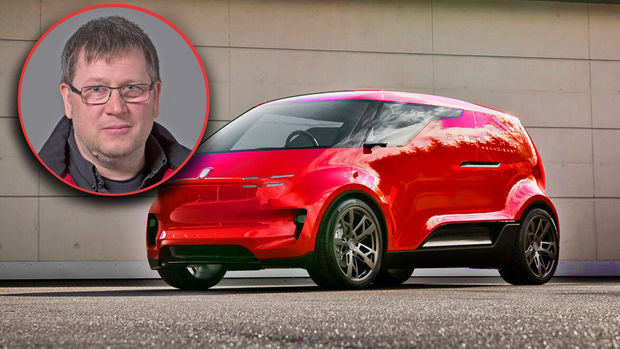 Porsche had allowed us a glimpse of studies never shown publicly by the design team from Weissach. And in 2018, Porsche Design had actually built an all-electric van, thus providing an answer to a question that hardly any Porsche fans have ever asked. What can a Porsche look like that focuses on the spatial experience? In short: This is what a Porsche van looks like. Room for up to six people, family-friendly, fully electric, and autonomous. And already we were allowed to speculate and hope: A model like the ID. Buzz, only even cooler and sportier? Possible. The part is “just an idea,” Porsche said, “for now.” 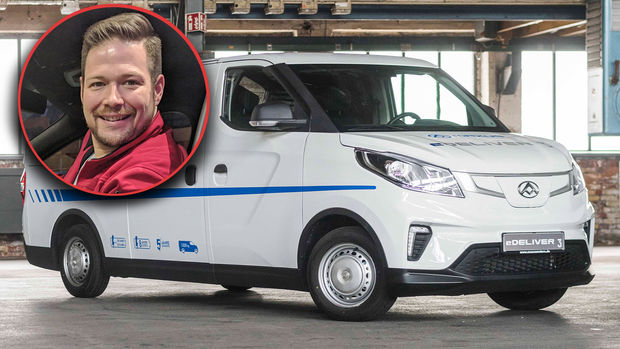 It’s possible that my requirements for a new automotive family member are a bit special. But it all helps: electric, please! And fully so. Without an alibi burner. And big. Whereby I’m primarily interested in usable space. So ideally a cube. And then, please, an interior that could also be put in the dishwasher. And bang, you’re at the Maxus E-Deliver 3, whose main problem, unfortunately, is not its short range, but the fact that the importer of the electric truck from China (SAIC) only imports it as a panel van. But there’s always something.

The range extends from a 1,100-horsepower quad to a camper van to spectacular conversions and concepts. More than any other collection of vehicles, our “Best of Curiosities” shows how colorful and crazy the world of automobiles fortunately still is.