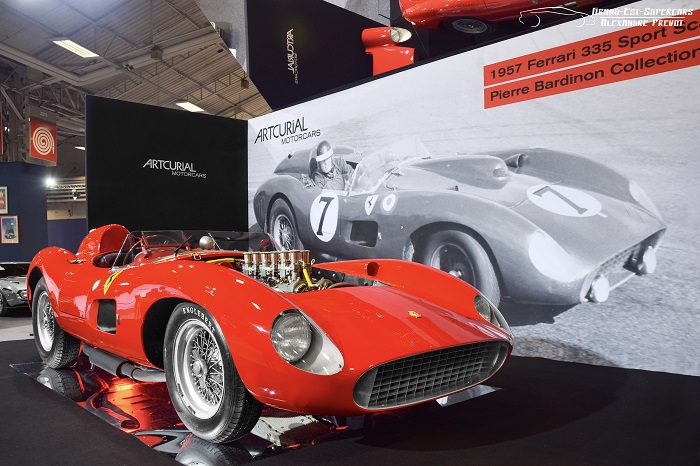 Over the long, more than a century of automotive history, countless significant and noteworthy models have been produced. But out of a million four-wheeled vehicles, only a few stand out from the rest. Whether because of the highest performance, legendary racing pedigree, or a number of other variables, these cars have become the most valuable ever sold.

In the world of collector car enthusiasts, all roads lead to… auction. In this market, where rich people from all over the world get access to the exotics of their dreams, the selection is vast and varied, and the pieces for sale can cost completely different amounts.

The price depends on many factors, including the degree of rarity, originality of the car, quality of restoration and provenance, and the difference between individual rarities of the same “breed” can be hundreds of thousands of dollars.

Regardless of who conducts the auction or how it’s conducted, traditional or online, the cars sold at such events are great. The most expensive bids presented over the past decade have reached enormous sums, due to the unique features of the cars, the scarcity of copies and market demand. Here are a few of the most prominent prize winners, valued at truly absurd amounts of money.

The legendary Uhlenhaut coupe may well be the most expensive sports car in history. According to reports citing “reputable sources,” one of only two models built went under the hammer in May 2022 for a staggering 135 million euros.

The car, whose name stands for “super,” “light,” and “racing,” cost three times as much as the next record-breaking car sold a few years ago by the same auction house (RM Sotheby’s) for more than 40 million euros. It never raced, but was absolutely supersporty for its time and reached an astounding speed of 286 km/h.

It was originally intended for motorsport, but after a tragic accident in 1955, Mercedes refused to participate in races for many years. And it was made exclusive by the fact that Rudolph Uhlenhout, then head of the testing department, used this 310-horsepower speedster as a company car. He never had a personal car, but his ideas were literally behind all of the German company’s racing achievements.

A stellar racing history certainly helped this sports car achieve celebrity status: it was once driven by famed car racer (and diehard Ferrari admirer) Edoardo Lualdi-Gabardi in a victorious run in the 1962 GT championship in Italy. In addition, this outstanding exhibit was among the 36 GTOs ever built at all, four upgraded Scaglietti and seven similar coupes that received the most aggressive bodywork.

These rare features raised the stakes to unprecedented levels when the classic Ferrari crossed the auction threshold during Monterey Car Week and was eventually sold by RM Sotheby’s for $48,405,000, including buyer’s tax.

It should be noted that rarity Ferrari’s have also reached larger sums when sold. However, the deals were done privately, bypassing the official route. One of them was made public with a disclosure of 52 million, but without mentioning the name of the new owner.

The other lucky owner of the legendary “rocket” became a certain David MacNeil, who paid for his dream $70,000,000 to Christian Glezel. There are only 36 copies of Ferrari 250 GTO in the world, and it is this model that breaks the most records.

The most expensive example was not only a perfectly preserved original and had some impressive achievements to its credit, but it was also among the few congeners that never crashed and almost never needed restoration.

For many years, the classic made in Maranello sold for enormous amounts of money. In 2016, a new record was set at an auto auction in Paris. The price at which the 335 Sport Scaglietti was sold was 32 million euros (Artcurial auto auction, February 2016).

The bidding began with almost 20 million euros, and after a minute the presenter recorded a bid of 25.9 million. Only a few bidders remained in the game, and after 10 minutes one of the mystery person announced the highest price, which no one was able to outbid. A mystery buyer from the U.S. paid 28 million euros for the coveted coupe. To this should be added 4 million costs charged by the auction house, so in total the unique 1957 car cost a record 32,075,200 euros.

The competitors fought fiercely for the lot: the auction was described by the press as “a passionate war, at times resembling a tennis match, with moments of silence interrupted by bursts of applause.

No wonder: the sports car with chassis number 0674 from the Pierre Bardinon collection once competed in the Sebring 12 Hours and the Mille Miglia, finishing sixth and second respectively.

It was also the first car in history to reach an average speed of 200 km/h on a single lap in the 24 Hours of Le Mans. It was driven by Mike Hawthorne, Maurice Trintignant, Wolfgang von Trips and other famous auto racers, and in 1958 Stirling Moss took the prize in the Cuban Grand Prix with this car.

In 1960, this treasure has passed into the hands of the architect Robert N. Dusek. He owned it for 10 years before ceding it to Pierre Bardinon, whose collection, according to rumors, had about 50 racing Ferrari.

Interestingly, the vast majority of the brand’s most valuable cars come from the 1950s and ’60s. They are advertised as “the most important, desirable and legendary cars in the world,” and the auction agents are hardly exaggerating.

The ’62-’63 Berlinetta family, the most expensive retro car sold at auto auctions in the four years following the overthrow of the Mercedes W196R (our last competitor), consisted of only 39 models. Although it was built in larger numbers than some of the other “Italians” on this list, its racing pedigree and ties to historically significant racers and events made it more elite, exclusive and status-oriented.

The jewel, owned by Stirling Moss, was sold to a private collection in 2012 for an unimaginable $35 million, and during another deal in 2013, it went for an insane $52 million.

Still dressed in a flashy racing suit, this two-seat coupe had previously been piloted by several venerable racers, including French Formula One champion Joe Schlesser for about half a decade before his untimely death in July 1968.

Collectors dream at night about more than just a red galloping horse. Any car enthusiast will tell you that vintage Mercedes may be some of the most iconic cars in the history of the auto industry, but it’s not every day you see a Formula One prizewinner sold at auction.

The Mercedes-Benz W196-1954 is no ordinary car with a three-pointed star. It was the first Silver Arrow to win a race with Juan Manuel Fangio at the wheel during the French Grand Prix-1954.

Some of the other brilliant victories include similar races in Germany and Switzerland in the same year. It was also driven by the famous Hans Hermann and Karl Kling.

The 1954 German supercar was the most expensive model sold at Bonhams auction for £19.6 (about $32 million). The high price was due to its striking appearance, rarity and impeccable sporting history, as well as the fact that it was the only W196 remaining in private hands at the time of the sale (July 12, 2013).