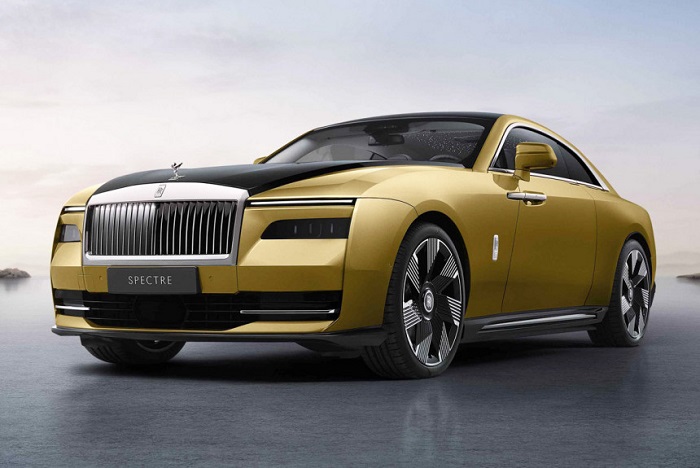 In 2022, the world will see a large number of new cars with high-tech on-board equipment. And contrary to the opinion that the future is in electric cars, this list includes not only electric models, but also releases with internal combustion engines. We have prepared a list of the 5 most interesting novelties, striking with their technology.

The new 7-series is the most controversial car in BMW’s lineup in terms of design, but it is better to postpone the discussion about the latter. In fact, the key feature of novelty is not the appearance, but plentiful onboard equipment, which has no equal. For example, a part of options and systems in the car is activated and controlled directly from a smartphone. So, now you can turn on the climate control, music, heating or even open the doors with a mobile device.

Instead of classic screens on the backs of the seats in the BMW 7 uses a single huge 31.3-inch monitor with 8K resolution, which is hidden in the ceiling and falls when you press the appropriate button. This screen will allow you to enjoy watching your favorite movies, TV shows and shows during long road trips or when returning home. LED strips are integrated into the panoramic roof of the vehicle, creating unique visual compositions in the dark.

Auxiliary sensor panels are also installed near the rear door handles. They are responsible for controlling the air conditioning and heating, seat adjustment, multimedia and massage functions.

In addition, the new “Seven” received an air suspension, chassis with full control, as well as an advanced autopilot system, which reached an incredible development. According to statements of representatives of the Bavarian automobile concern, the complex corresponds to 3 levels of autonomy. The last two options are offered at extra cost, while the air suspension is a basic part of the package.

And such revolutionary solutions are present not only in the electric model i7, but also in versions with 6- or 8-cylinder petrol units. Naturally, those who want to get the best out of life can buy the i7 with an electric motor with 571 hp of power and a range of 625 km. These cars will not appear on sale until the spring of next year.

This is the next flagship crossover from the Swedish concern, and the most high-tech electric car in the brand’s lineup. The Volvo EX90 will go on sale next summer, but you can already see its features and capabilities today.

With the launch of the EX90, Volvo has confirmed its forward-looking ambitions and has loudly announced its most advanced autopilot system ever, with 16 ultrasonic sensors, five radars, lidar and eight cameras. The presence of a laser sensor above the windshield, rather than in the bumper, as it was done before, allows the complex to determine the approach to pedestrians and other obstacles from a distance of up to 250 km. And an object lying on the road – for example, a blown up tire – is detected by the electronic system within 120 meters. That is, even if the speed is 100 km/h, this is quite enough to stop completely.

At the time of release, however, the buyer will only get basic driver aids, including lane-fixing, adaptive cruise control, lane change and braking. But as software updates are delivered “over the air,” the electric crossover will be able to become 100 percent autonomous.

Directly in front of the driver are two large monitors. The first replaces the analog dashboard, and the second, 14.5-inch diagonal, is on the center console. All displays are designed to display exclusively important data that will be useful to the motorist at a particular moment.

The infotainment system is based on the Android OS, and can also work with mobile networks of the 5th generation (5G). In Russia, this technology will not begin to appear en masse until 2024, so until then we will have to make do with the previous standard of 4G LTE.

No less important advantage of high-tech Volvo EX90 is the interior trim. It is represented by luxurious materials, including wool and fabric, as well as additional products made of recycled materials.

Regardless of the version and configuration, the electric crossover has only a four-wheel drive platform. The power reserve of the electric units can range from 408 to 517 hp. A full charge should be enough for 585 km of uninterrupted urban driving for the “younger” version, and up to 580 km for the senior version. These results were confirmed in the WLTP cycle tests.

Next we will talk about the electric novelty, which resembles an exhibit from a futuristic movie. The unique electric car HiPhi Z stands out with fully automated doors, as well as integrated LED elements that display messages or send the right signals to others. Such tasks are performed by LED units in the front and rear of the car, projecting useful clues from the navigation system directly onto the pavement.

The car has no side mirrors, but they are replaced by two displays and a number of cameras. In addition, an advanced lidar system is implemented here, as well as several dozens of sensors and sensors, which in the future will complement the system of intelligent autopilot.

The cabin of HiPhi Z provides four full-size seats. The display of the multimedia complex is located on a movable hinge, so it can rotate in a comfortable for the driver tension, as well as change orientation (fixed horizontally or vertically). At the same time there is no instrumental brush, and all the necessary data is displayed on the projection screen.

At the front, the HiPhi Z has a massive grille with movable honeycombs. At the back, you can see a retractable spoiler. Such a configuration has reduced power consumption by improving aerodynamic characteristics.

Two modifications will be available for sale – one with a 300-horsepower engine in the back and all-wheel drive model with two engines with a combined capacity of 600 hp. The NEDC-cycle range is claimed to be 705 km. The car will be produced in the near future.

Continuing our selection is one of the most luxurious electric cars and the first electric model from Rolls-Royce Spectre series. A key feature of the lineup is the lowest aerodynamic drag coefficient of any release of the brand – 0.25. The two-door coupe also gets the brand’s first-ever 23-inch wheels and the largest body panel going from the front pillars to the rear lights.

The most discerning and demanding buyers, when ordering a Spectre, can get a starry sky effect rendering that extends to the door cards. The instrument panel and multimedia functions repeat Ghost, but in the case of the electric model, there will be special software for more flexible control of high-tech options.

There is no autopilot here, but for Rolls-Royce owners, by the way, it is not necessary as they can afford a personal driver. At the same time, the 2-door representative of the ultra-premium segment has adaptive suspension, automated doors and a fully steerable chassis.

The manufacturer’s claimed range, verified in WLTP tests, is 520 km. The car can be ordered today, but the world will see the first copies not earlier than 2023.

The new Mercedes-Benz EQE SUV completes the top five most high-tech cars of 2022. In front of you is an all-electric crossover that has visual similarities with the EQE sedan. In addition, the cars have an identical platform and on-board equipment. Only in our case there is an off-road driving mode, which raises the air suspension and remembers the terrain where these manipulations took place for automatic lifting the next time.

Along with these, the Mercedes-Benz EQE SUV has a non-standard swivel wheels on the rear axle, capable of turning out up to 10°. There are three large displays of infotainment system, and only in the front (one in the center and two on the sides). The central monitor has a 17.7-inch diagonal, and the passenger and driver’s screens got 12.3 inches each. At the same time, the passenger display has a separate control for added convenience.

Among additional options which can boast of the novelty is a projection screen, massage functions at the seats, built-in air ionizer, projection headlights, advanced driver assistance systems and more. In addition, the Mercedes-Benz EQE SUV has an amazing power reserve of 677 hp, provided sufficient charge, as well as autonomy up to 590 km on the WLTP cycle.