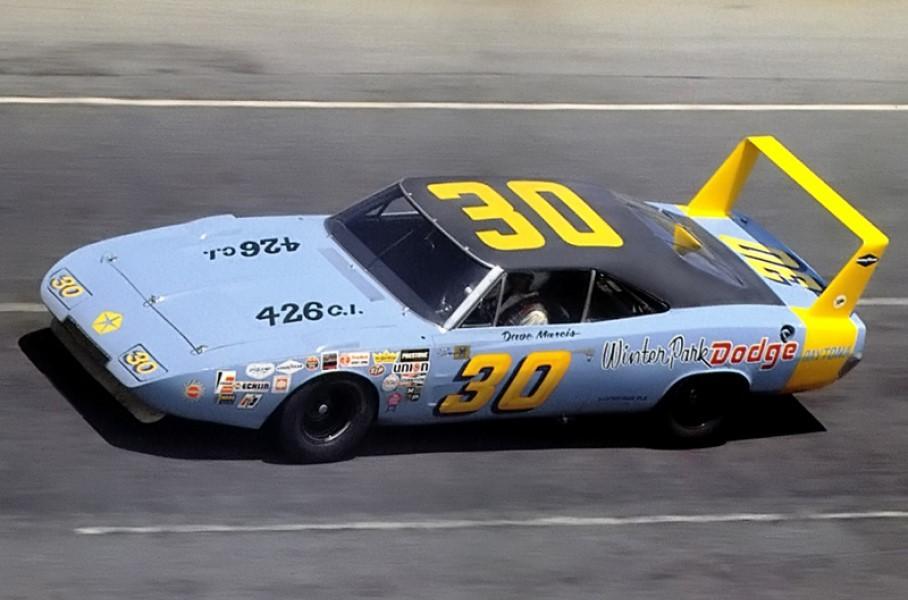 In honor of the model’s 50th anniversary, here’s how the Daytona went from “the ugly duckling” to a circuit racing star

It was 1968: the Chrysler-owned Dodge and Plymouth brands were more than confidently competing in NASCAR circuit races, winning win after win, and the team had Richard Petty, one of the toughest drivers in series history. It seemed that Mopar was safe, and no one could compete with the Dodge Charger and Plymouth Belvedere.

But that all changed at the end of the year when Ford put the Torino Talladega coupe, a streamlined version of the Torino model, on the track. It left the former Nascar star far behind. At the same time, Petty realized he could no longer maintain championship status with Plymouth and dealt the team another blow by defecting to Ford. The company urgently needed to develop a new plan of action.

The only way out was to put a more powerful rival on the track who could not just compete with Ford, but surpass it. There were two variants: either to force Hemi engine by 90 horsepower, or to work on aerodynamics. The first option was ruled out almost at once – the engine was already running at its maximum capacity. To increase the power, it would be necessary to assemble a new engine, which simply had no time. That’s why the bet was made on drag reduction.

The first attempt to improve aerodynamics was the Dodge Charger 500. The truck was made more streamlined, the rear window was tilted more and the radiator grille was moved a little bit closer. But this was not enough – the car was unstable at high speeds, and the rear clearly lacked downforce. That’s when Dodge engineers decided on perhaps the riskiest experiment in its history.

At that time, the knowledge of aerodynamics is only beginning to accumulate, and antifenders in the ring racing were not used at all. At least, that was until 1969, when Dodge decided to get ahead of the curve by showing the world that very “Daytona.” The car was based on the five hundredth Charger, but added a 45-centimeter nose with a sloping line and a huge 80-centimeter high rear wing.

To say that the car was met with a barrage of criticism, it is not to say anything – the radical appearance of “Daytona” even today looks quite ambiguous, let alone the late sixties. Journalists were shocked that such a unit would not only compete in NASCAR, but also drive on public roads – under the homologation program, companies had to produce at least 500 road versions of race cars.

In mid-April the car was officially introduced to the public, and already in June, tests began. During the first speed test of “Daytona” pilots managed to gain acceleration only to 310 kilometers per hour, which was not much better than Charger 500 performance. When they complained, the test manager pointed to the planes circling over the track – competitors from Ford, of course, could not miss such a day and personally flew in to watch the first test.

Dodge management foresaw appearance of unexpected guests and decided to go for a little trick – instead of racing Hemi engine with 620 horsepower, they took “Daytona” with usual 375 hp engine to the track. When the rivals realized that Dodge did not pose any special threat and ceased to follow the practice sessions closely, the team brought out the real Charger Daytona for tests.

Even with slightly modified aerodynamics, the car was able to pass the cherished mark of 200 miles per hour and accelerate to 328 kilometers per hour. And a car with a racing engine was able to accelerate to the crazy mark of 391 kilometers per hour. Add to this excellent downforce, the highest stability among all competitors and a drag coefficient of 0.28 – you get an unbeatable car.

But the civilian Daytona failed to win the love of the audience. Despite the relatively low cost of $4,000, its appearance continued to be considered rather ugly. Besides, the car appeared also terribly impractical – because of the peculiarities of the nose design at “low” speeds up to 100 kilometers per hour it simply had no time to cool down and almost immediately overheated.

The first race, as well as the first attempt to improve aerodynamics, came out not the most successful – the track was so uneven that most of the participants, including the main rivals Daytona, simply refused to participate. Dodge nevertheless decided to compete and, of course, won, but you have to agree that it doesn’t take much talent to beat the Veyron’s Solaris. So the team’s first win was more of a disappointment than an achievement.

Then came a prolonged “moment of glory” for Dodge – in 1970, Daytona won gold in 80 percent of the races! In March of that year, the oval record was set: 328.9 kilometers per hour, which could only be broken 13 years later. And at the end of a stellar season the team wrested its arch rival driver Richard Petty, promising him to build for the new season the most powerful car, which will surpass even “Daytona”. Thus appeared Plymouth Superbird with the same sharp and long face and a giant antifender, which continued to win victories and set Nascar records. But that’s another story.