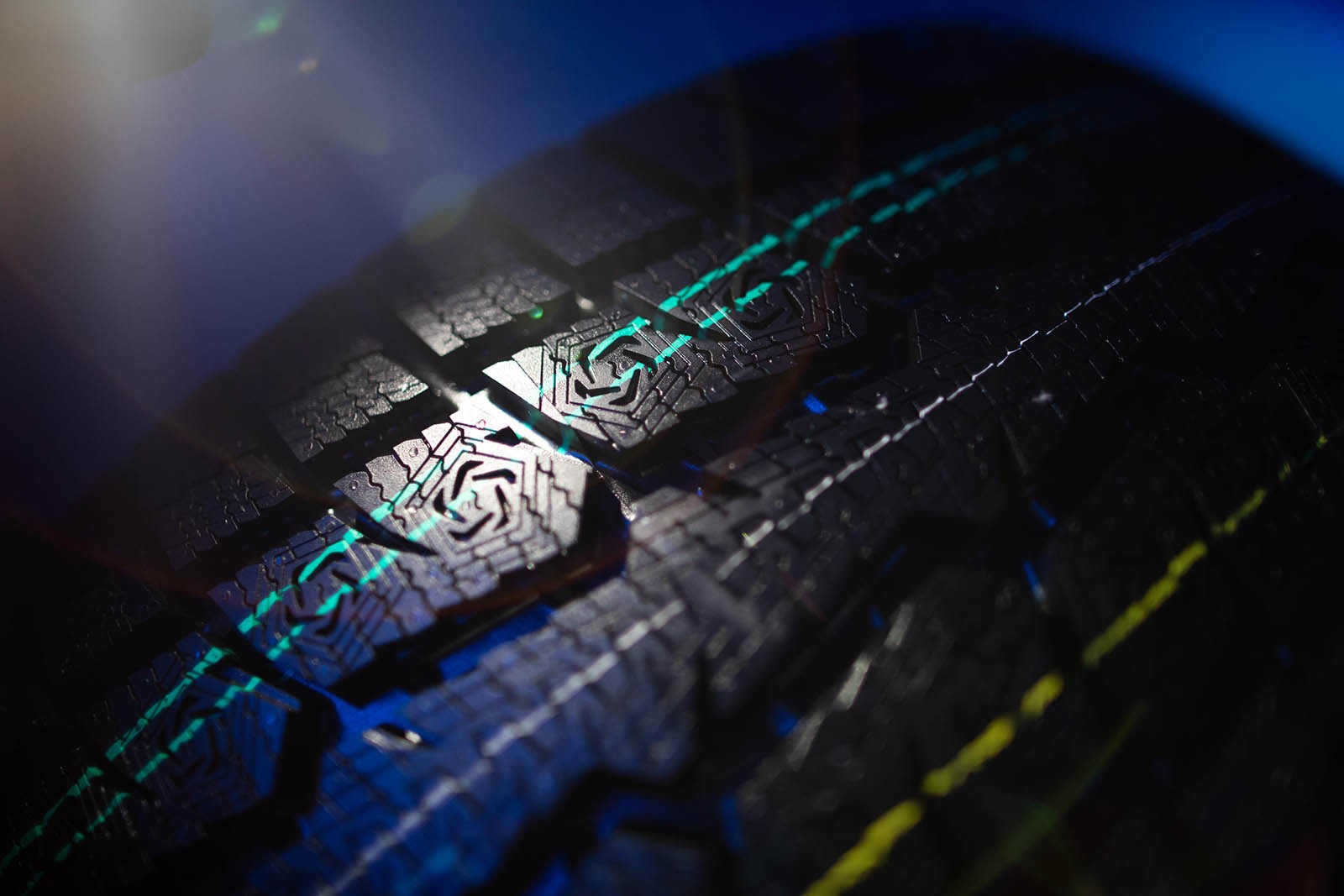 Japan’s Toyo Tires has a long history of developing winter friction tyres, stimulated by the legal ban on studded tyres in their country. This has prompted Japanese engineers to look for high-performance solutions in the non-spoke segment. The Toyo Observe GSi-6 tyre incorporates both tried and tested proprietary technologies and new developments.

When Toyo engineers developed the tread pattern of this new friction tyre, they aimed to build on the strengths of its predecessor and to meet increased customer demands, which require not only grip in the winter but also excellent handling and directional stability.

The Observe GSi-6’s symmetrical directional tread design represents an evolution of the previous GSi-5 design. The designers’ commitment to increased grip edges and tread density is immediately apparent. Instead of relatively smooth longitudinal edges, the centre rib has been replaced by jagged arrow-shaped protrusions. Not only does this naturally increase grip properties, it also enhances rib stability under lateral loads during cornering and manoeuvring, as well as optimising the contact patch. In the middle of the rib there is a continuous sine wave-like sipe along its entire length, which is reminiscent of a pendulum-like track; a similar solution was used in the previous tyre, but the sipe was interrupted in places and its outline was less sharp. On both sides of the central lamella there are numerous perpendicular straight and serrated grooves – the important thing is that no such element cuts through the rib, thus maintaining its high density. The combination of all these solutions has significantly improved the car’s steering response as well as its acceleration and braking dynamics.

Tread density has always been an issue in relatively soft friction tyres designed for use in harsh winter conditions, and Toyo engineers paid special attention to this issue in the Observe GSi-6. The 3D lamellae walls contain wave-like interpenetrating elements which restrict reciprocal movement. The walls of most blocks are supported by the so-called “snow claws” in grooves, triangular elements that, like struts, prevent the blocks from shifting under load, mainly lateral. The central zone blocks are twinned for greater rigidity and are able to withstand an increased load with different vectors, whereas in the previous model such blocks had no common connecting elements.

The tread is traditionally full of blades, and the number of fine grooves in the new tyre is even visually larger than in its predecessor. In addition to the usual straight and zigzag grooves, there are spiralling sipes in the central area blocks. They promote grip in all load directions and at different steering angles. Around these grooves are First Edge grooves that start to work from the first metres of the tyre’s first run-in. The outer edge of the shoulder area is lined with lug grooves for confident driving in deep snow and ruts.

The rubber compound is formulated by Japanese developers with time and winter-tested proprietary technologies, including the Microbit concept, famous for its unusual and even exotic use of walnut shell particles as micro-abrasive traction elements. In fact, there is not much of a marketer’s desire to surprise potential customers, though they succeeded, but much more of an engineering calculation. The fact is that exactly this material successfully combines natural environmental friendliness and necessary physical properties: it is strong enough to cling to the ice, but not so hard to damage asphalt pavement; in addition, if you look at the small particles of the shell under a microscope, you will notice a very effective natural cut, as if specially designed to penetrate the ice.

Another technology, familiar from the previous tyre, helps to remove the slippery micro layer of water created by friction when driving on ice. In the rubber compound, engineers add an environmentally friendly natural absorbent made from bamboo charcoal powder, which immediately absorbs the slippery film, thereby increasing grip on the surface. It has a particularly positive effect on acceleration and braking dynamics when the friction forces are high. In practice, this translates into seconds when starting off and saving metres during emergency braking.

An important property of the compound on a winter road is elasticity, where the rubber is able to hug the smallest bumps even in extreme cold. The use of silica (silicon dioxide) is widespread here, but Observe GSi-6 benefits from Nano Balance technology, which features a special polymer that enhances the dispersion of silica in the rubber compound and improves overall molecular bonds.

To improve the tyre’s durability and reliability in demanding winter conditions and to improve handling, the designers have paid special attention to the tyre’s construction. Two layers of metal cords and an anti-extension top layer offer stability in all driving conditions and good handling. This is reinforced by the strong sidewalls, where in some sizes they are additionally reinforced by a highly tapered carcass layer. The tread profile is designed to distribute pressure evenly across the contact patch, which also improves on-road performance.

Toyo’s evolutionary development of advanced technology has enabled the new Observe GSi-6 to outperform its predecessor in terms of key features. Specifically, the new 225/50 R17 tyre tested on test ranges at 40 km/h had a braking distance on ice that was 4% shorter than that of the Observe GSi-5. Braking at 100 km/h on wet pavement was even more striking, with a 17% shorter braking distance. Rolling resistance and handling on dry and wet asphalt, as well as on snow and ice, are also noticeably better.