Somewhere, but in the United States, the 1960s are remembered with special nostalgia: electricity and gasoline were cheap, cars were big, and there was less and less to worry about. During those years, America decided to develop the aerospace and military industries, and this had a strong influence on other areas of life as well. It was then that automakers made a dramatic leap in technology and internal combustion engine design, and then turned their eyes to gas turbine propulsion systems. The Chevrolet Turbo Titan III was born out of this wave of enthusiasm for space. 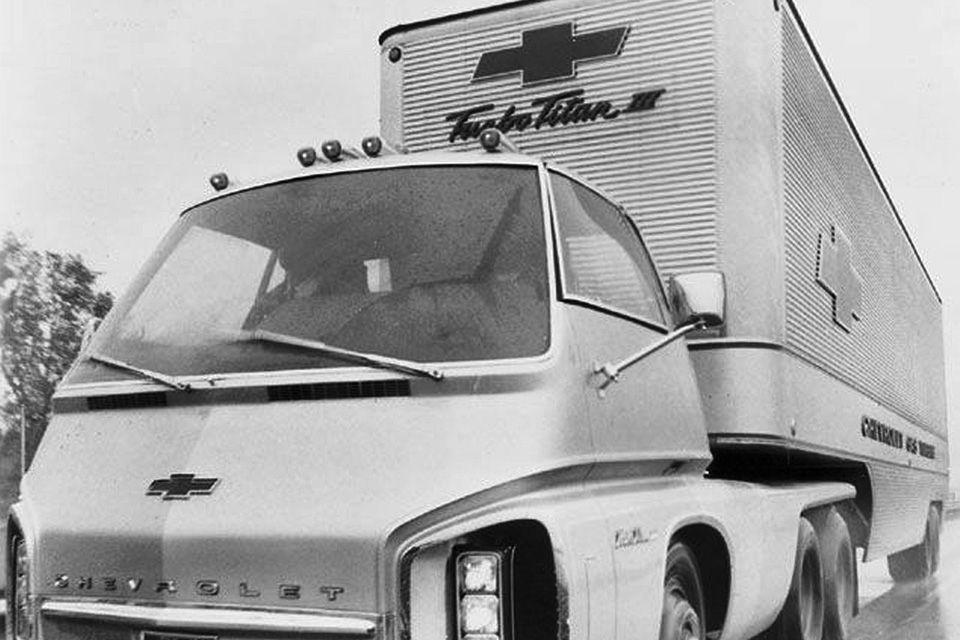 Chevrolet had begun developing the gas-turbine engine back in the early 1950s, and imagine, it was no pioneer – Chrysler had been probing the field before WWII. These engines had a lot of advantages: high downward thrust, fewer moving parts (and less frequent repairs and maintenance), compact size, and a huge amount of heat energy that could be used, for example, to heat the cabin in winter.

That’s what drove Chevrolet’s decision to put the GT-309 turbocharged engine in the Turbo Titan III. The “3” in the name appeared for a reason – there were two early prototypes, but they both were not too successful. But the third prototype was a real eye catcher. Together with a custom Chevrolet semi-trailer, the Chevrolet Turbo Titan III stretched 15 meters long, and its GCW was 35 tons. 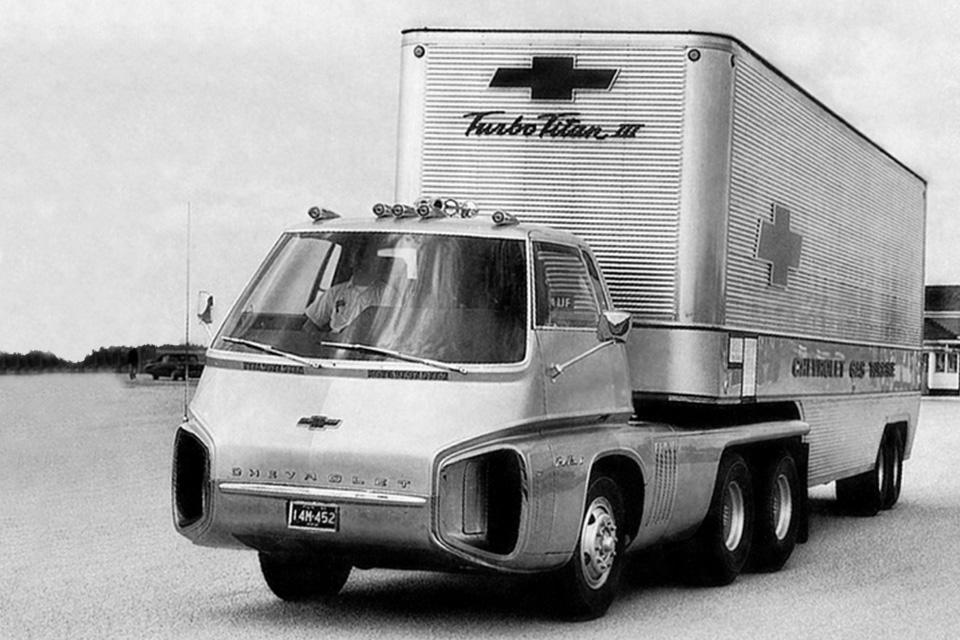 The body was constructed of fiberglass and steel, and had two key features. First, the headlight and turn signal blocks that protruded from the front bumper (Note how the car looks in “sleep” condition with the headlights retracted in the previous photo). Second, these are the gull-wing doors – yes, later than the Mercedes 300SL, but earlier than the Tesla Model X.

The main feature of the Turbo Titan III, however, was undoubtedly the engine. The GT-309 unit had been in development for 15 years, and before the truck, it had been tested on the Firebird concept, the Turbo-Cruiser bus, and more than a dozen Allison prototypes. The engine had 280 horsepower and 1,200 Newton-meters of torque. And it wasn’t the most powerful gas turbine engine GM had at the time – the 1964 Chevrolet Bison, for example, had 1,000 horsepower! 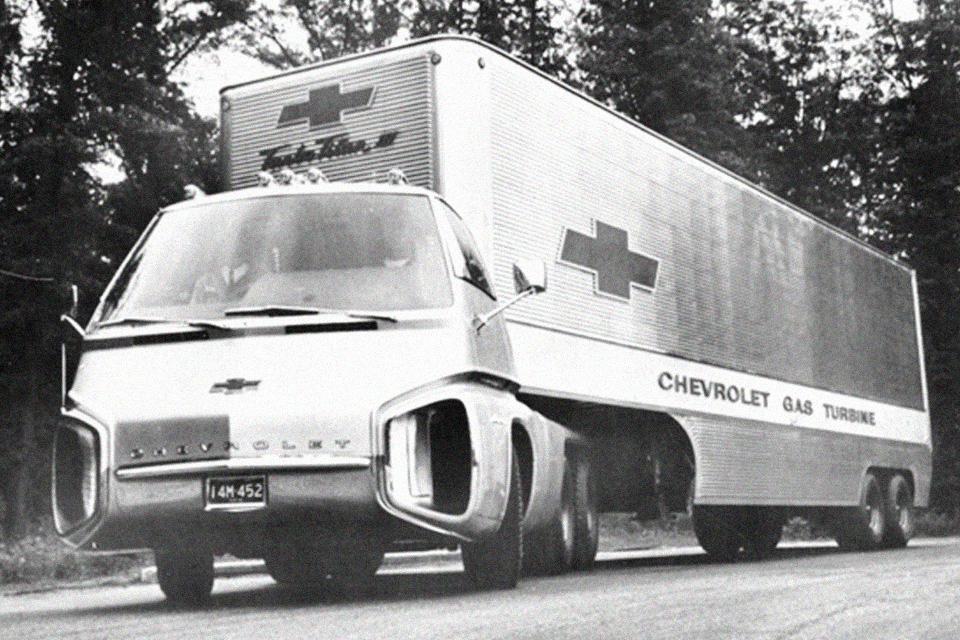 The traditional Allison automatic transmission in the Turbo Titan III was connected to the gas turbine engine by a special aluminum adapter. The hydraulic retarder was removed, as well as torque converter components. There were six gears. 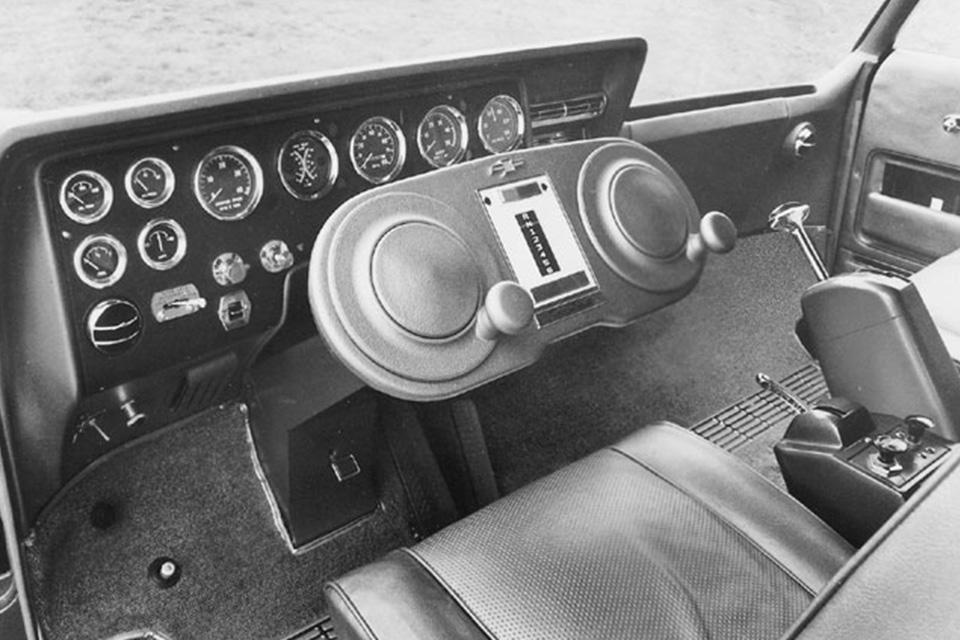 Inside the Turbo Titan III, there was also much to see. For example, two steering disks. In fact, there could have been one, just the system duplicated in case one of the discs failed. The panel was tilt-adjustable for greater driver comfort. There were also airplane-type seats with integrated headrests, as well as FM radio and telephone! And all this in 1965.

The Turbo Titan III had every chance of being a production truck, Chevrolet could afford an expensive truck with a complex manufacturing gas-turbine engine for the sake of prestige. But in 1970, there were emission restrictions in USA, and it turned out, that it is too difficult to adapt the vehicle with such engine to these standards. The project was frozen until better times. Which, alas, never came.