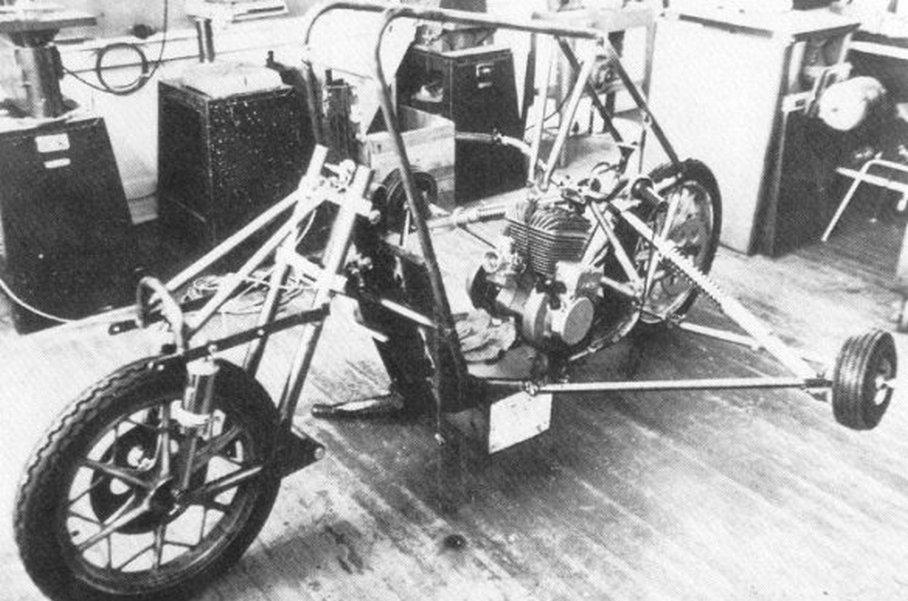 In the seventies, cars made a real leap in safety. This was made possible by changes in laws based on serious scientific research. Cars started getting energy-absorbing bumpers, injury-resistant dashboards, telescopic steering columns, head restraints, and three-point seat belts.

In America, the National Highway Traffic Safety Administration (NHTSA) was responsible for these changes. From 1977 to 1981, under President Carter, the organization was headed by lawyer and social activist Joan Claybrook, a protégé of politician Ralph Nader. The same Nader who became famous for the book “Dangerous at Any Speed” about the Chevrolet Corvair. Claybrook has taken on an ambitious task: to reduce the number of injuries and deaths among motorcyclists.

For this noble goal, Claybrook wanted to create nothing less than a “safe motorcycle. She envisioned making the rear wheel steerable and putting the rider in a seat with straps and surrounding a safety cage.

According to her design, such a bike was developed: one of the engineering firms performed the task. The driver was seated very low, right behind the engine. Moreover, a single-cylinder two-stroke engine drove the front wheel! In general, it would be more accurate to call it a “motorcycle-backwards”.

Anyone who has ridden a bike understands the instability of such a design. Nevertheless, a prototype of the “safe motorcycle” was built – the project cost as much as $120,000 (almost half a million in today’s money).

The futility of the “safe motorcycle” became evident at the first tests. Even the most experienced motorcyclists could not pass more than 15 meters. Luckily, the bike was equipped with side thrust rollers, so none of the testers got hurt.

That’s how American bikers didn’t get on the “safe motorcycle.” Only one photo and a dozen of sarcastic publications in press remained from it. However, really useless work Joan Claybrook can not be called: for example, she successfully lobbied the introduction of compulsory wearing helmets, which owe their lives to many American bikers. So the loss from her work can be valued “only” in half a million dollars.