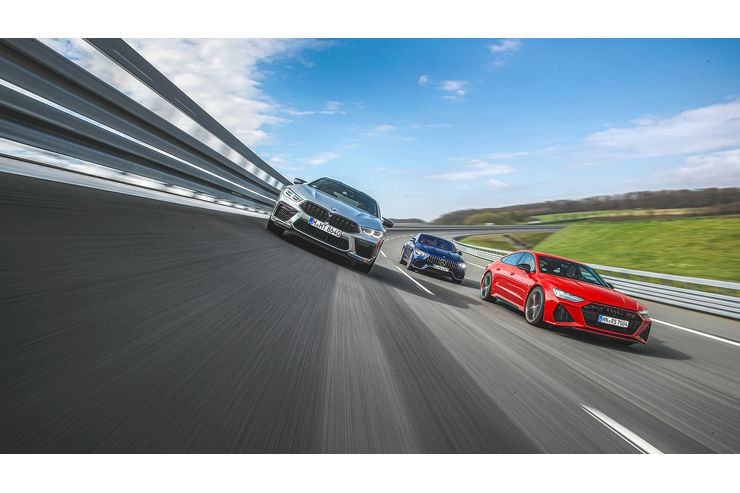 A parking lot somewhere on the K something or other between here and there around seven in the evening. Connoisseurs love this melange of waning sun and increasingly broom-clean side streets. But this time: a crackling sports exhaust system and a perplexed tester. How is he supposed to explain it? What exactly? A scuffed rim? An overlooked speed trap? None of the above. Much worse: How do you let three sedans with 600 hp plus slip elegantly through the test scheme, text and traffic? How do you pack the superlatives? Well, with a little thought, a lot of testing – and composure.

In any case, it doesn’t help to drive on this side of the law on the home stretch with forced limiter rattling, exhaust banging and tire squealing. Sure, after all, the Audi RS 7 Sportback, BMW M8 Gran Coupé and Mercedes-AMG GT 63 S four-door bring even the thoughtless to philosophy with dynamics and perfection. At least in their bacon belt. Without thinking in “absolute” and “relative” terms, nothing works with these cars. Let’s just take the sprint to 100. 3.0 seconds for BMW and AMG. Yes, a Taycan can do even better (in 2.8 s), but the Audi RS-7 test car only in 3.5 s. Only … Do you notice anything? We’re already in the middle of the vortex of relativity.

And? three-five to 100. Great, the driver thinks, while the hairs in the equilibrium organ shyly come out of hiding. Later it becomes clear that the Audi is half a second behind. Wicked relativity. In absolute terms, the RS 7 fulfills every tempo wish with select servility, traction and vehemence; no one would accuse it of phlegm, just as the four-liter biturbo V8 revs and makes and does, even flirting as a mild hybrid.

Still, the two competitors are faster, tougher, more blatant. The way the BMW M8 with 4.4 liters and the AMG with its four-liter hammer away, it’s insane. Absolutely and relatively. Even savvy driving people leave the phrase “Yeah, but compared to the …” in their back pocket.

Where the Audi apparently always has to catch its breath for a tiny moment, slightly delaying the full-throttle command to the noticeably accelerating superchargers and pistons, the other guys already have a party zone in the V8. Subjectively, objectively, absolutely and relatively. Up to 280, they just give themselves half a second, and the Audi two. Also nimble: 10.4 and 10.5 seconds respectively to 200.

And when it comes to braking? The hearts with their powerful ceramic brakes and wide tires try to crack the collarbones of the occupants with the seatbelt. Whereas testers used to be happy about values around the acceleration due to gravity, today’s car is a pug at 35 meters from 100. You have to achieve a deceleration of 12 m/s² and a distance of 32, 33 meters. Not as a starved GT monster with sticky tires and FIA cage, but as a real sedan. 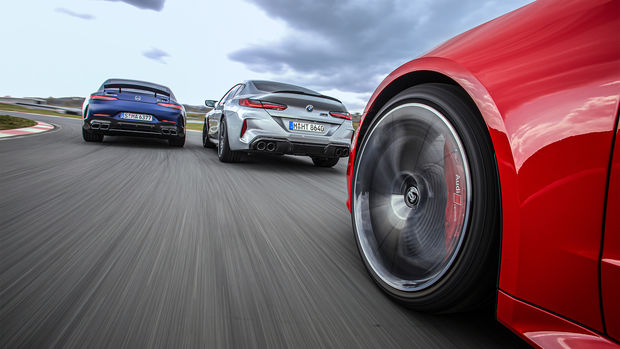 The BMW has a braking distance of 32.2 meters from 100 km/h. The AMG rolls just past with 33.0 meters, while the Audi allows itself 35.1 meters. Absolutely okay, but disappointing in relative terms.

Bachelor in the travel compartment, so to speak, with three-zone air suspension, four-zone climate and multi-channel surround, as pearly as bass-controlled, yet as spacious as a lace dress floating in the summer breeze. Limousines that cool or warm their rear-seat passengers’ drinks in the cup holders and carry them to distant destinations in ambience-lit, nappa-papered, carbon-paneled boudoirs on saddle-brown hides.

Phew, a bit much? Yes, but it had to be said. Also that with the trunks, except for the BMW including a large hatch and more than 1,300 liters of volume. With the rear seat backrests folded down, the trunks can easily accommodate bicycles and similar express goods, and offer extensive assistance. This ranges from the head-up display, night vision, lane keeping and other interventions to the absolutely convincing Matrix LED, which is even relatively brighter in the case of BMW and Audi.

But back to the Lahr test track. To the core competence. Ours and that of the three sports models. Driving dynamics. Start in the RS 7 with the somewhat high seating position. It remains good-natured, the steering gentle, always clearly filtering, fittingly a gentle push over the front wheels along with delicate body movements. This makes the Audi – in absolute terms – a snug as a whistle. Even without electronic stability control with increased load shifting pleasure, stabilizing under load with a delicately flared rear end where you feel the electronically controlled rear differential, as well as rear axle steering.

The M8 also has this, but places its driver much closer to the action, and not just because of the low seating position. Even in 4×4 mode, it cultivates the tradition of rear-wheel drive without needing the rear-axle-focused drift mode that AMG also offers. Before the M8 understeers, they tap Flensburger at the Oktoberfest (they actually do: in Tokyo – but that’s another story). In the slalom, the M8 (about three hundredweight lighter than the competition) enthusiastically yaws through the cones, immediately informing the accurate steering. It shows neither noticeable understeer nor load change reactions, but plenty of grip and a tendency to oversteer under load. 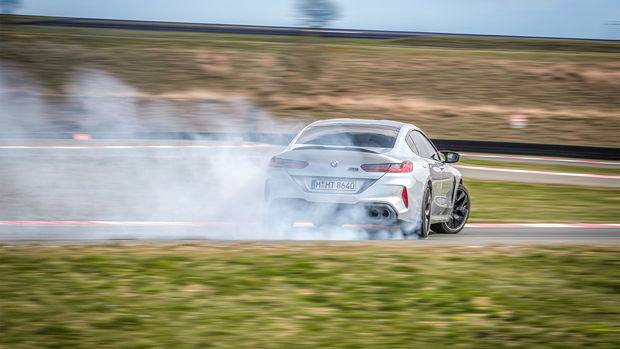 Even in 4×4 mode, it cultivates the tradition of rear-wheel drive without needing the rear-axle-focused drift mode.

In the double lane change it shows off its front-axle grip, the rear follows. With ESP. Without it, the high mechanical grip takes revenge in the form of a narrow limit range. Before nose-pickers have their index finger back on the steering wheel, dense Michelin Pilot Sport 4S fog has rolled in after the spin. The M8 is old school – very grippy and precise for a long time, then tricky.

And the AMG? You’ve already spiked to the measured values? Yikes! So: tending to oversteer in the slalom, load-shifting, but well controllable. Here scarcely fastest it puts on at the double lane change. Where the BMW admonishes moderation when the going gets tough, the AMG driver is allowed to experiment in the relatively wide limit range. 5 km/h faster than the M8 and over 8 faster than the absolutely fast and easy-to-drive RS 7.

Speaking of which: How does Audi Sport manage to achieve such comfort despite 22-inch wheels? The RS 7 rolls sensitively and absorbs bumps smoothly. Dynamic” feels like “Comfort” in the M8. This is not an M compliment; in the long run, the Gran Coupé’s dry tuning is distracting and evokes associations with Unibal suspensions. (Sure, they’re harder – it’s just an association).

Where does the AMG stand? It looks a bit flat from the outside, prompting a discussion about whether it makes sense to mix the style of the transaxle two-door GT with the undercarriage of the E-Class T-model. 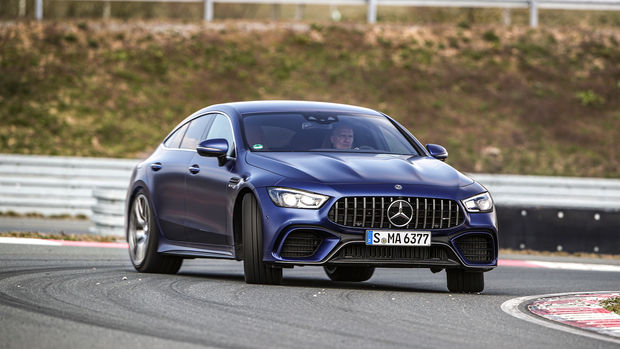 AMG: We appreciate ultra-fast guys like the GT – the way its V8 bolts off, makes speed, the all-wheel drive grips, the limit range reveals itself in grace, the interior luxusprunkt.

But, dear AMG boss Moers: We take our hats off to this GT. Crazy fast, easy to drive, it integrates its pilot perfectly into the fabulous sports seats under the option carbon roof along with comfort suitable for everyday use, trustworthy all-wheel grip (315 tires at the rear) and steering that you can’t really appreciate at first, but then learn to appreciate. Because it can do everything without imposing itself.

So: To find out this and everything else, we tractored the Lahr and Boxberg test tracks for you, verified on the road, swapped cars back and forth, discussed and philosophized. Until, in the end, we were sure we had found an explanation for everything – munching on rolls in front of our favorite supermarket, accompanied by the crackling of the sports exhaust systems.