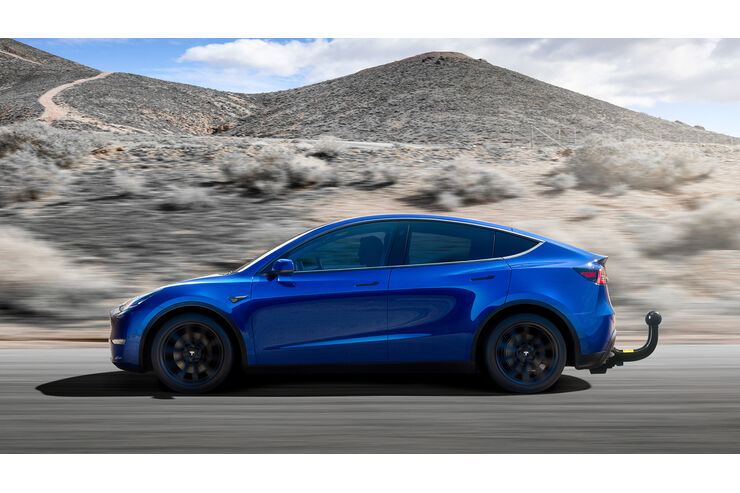 Those who want to tow heavy trailers will find few suitable companions among the e-cars and plug-in hybrids – for technical reasons. There are a few bright spots like the Tesla Model Y, but there are also negative examples like the VW ID.3.

There was a time when the BMW 530e, the plug-in hybrid version of the series, was only allowed to tow 750 kilograms. A measly towing capacity for an upper mid-range model that can tow trailers weighing up to 2,000 kilograms with a pure combustion engine. But now the 530e and its plug-in hybrid brethren are finally an alternative for drivers who frequently travel with trailers: BMW has raised the towing capacity to 1,700 kilograms – enough for most caravans or horse trailers. The all-wheel-drive 530e and 545e xDrive can even tow up to 2,000 kilograms.

The previously very low towing capacity had nothing at all to do with a lack of engine power. According to BMW, the nature of the rear carrier structure limited the towing capacity. Strengthening it is said to have necessitated extensive conversion work, after all this is where the lithium-ion battery is located. The weight of the battery sets further limits, and this is where the issue of axle load distribution comes in. But the Munich-based company seems to have mastered these challenges in the meantime.

As a result, the partially electrified 5 Series has now caught up with the plug-in competition. Both the hybrid E-Class 300 e (gasoline) and 300 de (diesel) and the Volvo V90 T8 Twin Engine take up to 2,100 kilograms on the hook. The VW Passat GTE has a maximum of 1,900 kilograms, and the Audi A7 55 TFSI e has a towing capacity (braked) of 2,000 kilograms. Here it comes down to little things – such as the clutch in the transmission. Mercedes, for example, has been using a nine-speed automatic with torque converter, torque converter lock-up clutch and disconnect clutch in its plug-in e-classes for some time, which is supposed to promote a high towing capacity. Wet clutches, as used primarily by the competition, are said to have disadvantages in this respect.

If you dig through the data, it becomes clear that anyone who wants to buy a car with an electrified powertrain and also tow a trailer regularly will still find a very limited range. This does not apply to the mild hybrids with 48-volt systems that are currently flooding the market; their towing capacity can generally keep up with that of pure combustion engine models. But models with reasonable towing characteristics are in short supply, especially among the full-time Stromers.

The battery as a hindrance to towing capacity

There is a central technical reason for this: the battery. In terms of the energy it can provide, the battery is currently very large and expensive. That’s why it has to be trimmed first and foremost for efficient power consumption. This can be estimated quite concretely if only the mass of the car plus crew and luggage has to be included in the calculation. However, a heavy load on the trailer hitch is an energy-consuming black box that is difficult to estimate how it will affect the energy consumption of an electric car. So manufacturers minimize the risk by minimizing the towing load. 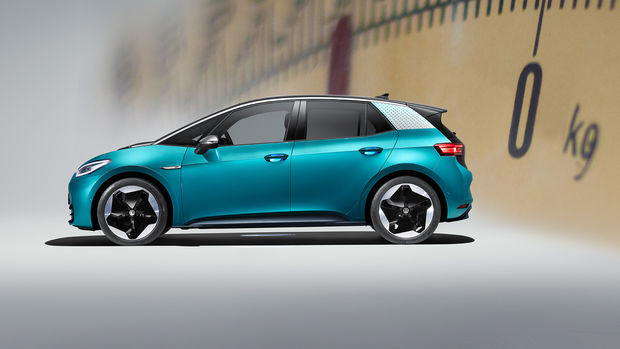 The towing capacity of the VW ID.3 is exactly zero kilograms.

As a result, the towing loads of the all-electric variants of the BMW i3, Hyundai Kona and Ioniq, Kia Niro and Soul, Opel Ampera-E, Nissan Leaf and Renault Zoe are all zero without exception. The same applies to the VW ID.3; anyone who wants to tow trailers with an electric Volkswagen based on the MEB has to reach for the ID.4. But even its towing capacity of a maximum of 1,200 kilograms (braked) is on a rather low level for an SUV of its size.

Large PHEV SUVs with up to 3.5 tons towing capacity

Things hardly look any better for full-blown plug-in SUVs. In the case of the Ford Kuga PHEV and DS 7 Crossback E-Tense, the maximum is 1,200 kilograms, while the Mitsubishi Outlander PHEV can tow trailers weighing a maximum of 1,500 kilograms. The towing champions among the alternatively powered cars are – of all things – the large SUVs. Among the plug-in hybrids, the Volvo XC90 T8 (2,400 kilograms), all P400e variants of the Range Rover and the Ford Explorer PHEV (2,500 kilograms each) are pretty far ahead. Even better is a BMW model, the X5 xDrive45e (2,700 kilograms). However, the respect gap to the front-runners in this ranking is enormous: The e-hybrids of the Porsche Cayenne, the Mercedes GLE 350 de and the new VW Touareg R tow away trailers weighing up to 3.5 tons with their beefy torque. 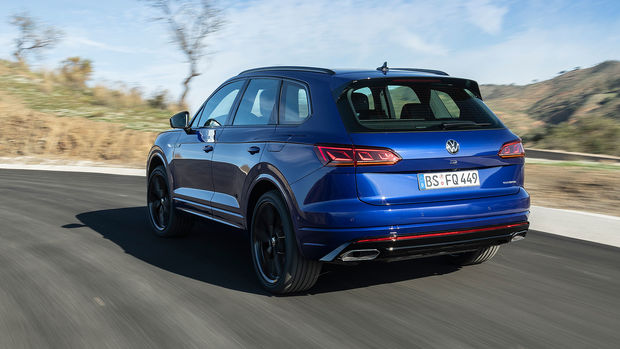 The new VW Touareg R takes up to 3.5 tons on the hook.

And among the purely electric cars? The towing capacity of the Jaguar I-Pace is 750 kilograms (unbraked). The Polestar 2, for which a trailer coupling costs an extra 1,100 euros, can tow 1,500 kilograms with brakes. The Tesla Model Y with its €1,050 trailer coupling hooks up trailers weighing up to 1,600 kilograms. The Mercedes EQC and the Audi E-Tron have a rather modest towing capacity of 1,800 kilograms in view of their size. The Tesla Model X is almost half a ton better and therefore the e-car front-runner: The American with the gullwing doors can tow up to 2,250 kilograms.

… sufficient. Everyone is sure to find a model that meets their requirements.

Caravan to compact car and off on vacation? That is currently only possible with a few electric cars. Anyone who wants to regularly tow trailers with an electrified car still has to resort to large vehicles – and plug-in hybrids – more than with combustion cars. But that could change as soon as batteries become more efficient and thus both smaller and cheaper. Then manufacturers are also likely to release larger towing loads for electric cars. Otherwise, there is no technical reason why they cannot pull heavy trailers. In any case, many of them can easily muster the necessary power.