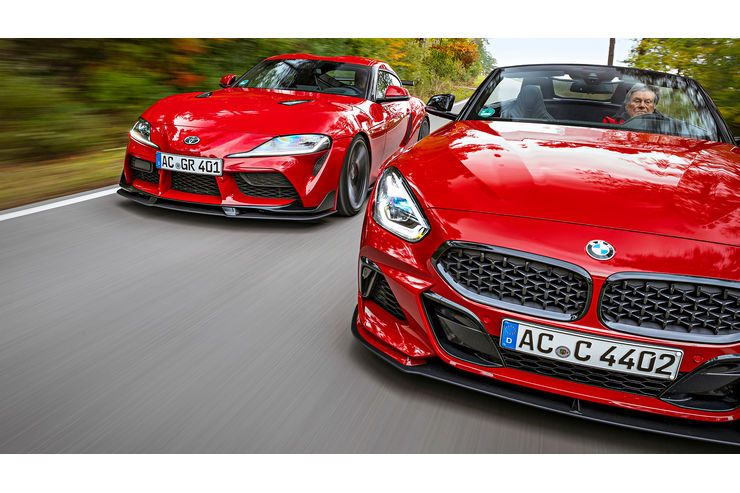 The small concerns nestle in the back corner of the mind. Not the one about being too slow in corners or on straights. The carving boys sip and devour them like the Englishman sips tea and snacks at tea time. Again and again – and again with relish.

Germany’s roads, however, whether in the city, in the countryside or on the autobahn, are not as smooth as a platter. Brittle pavement, asphalt patchwork, potholes as oceans for insects, waves like in the sea: it’s all there. And the Toyota Supra and BMW Z4 M40i from AC Schnitzer iron over it, so that sometimes your teeth chatter in the driver’s seat.

Take the A8 freeway from Ulm to Stuttgart: the tuned Supra rode down the left lane at over 200, but now 120 is the speed limit, downhill the Aichelberg. On these few kilometers down to Kirchheim unter Teck there are a few nasty asphalt bumps that the driver’s body in this sports car helps cushion – as an extended arm of the short springs, so to speak. There can be no talk of good driving comfort in everyday use, as AC Schnitzer claims. In the Supra even less than in the Z4, which at least seems to strut a little more gently over bumps, manhole covers, potholes and level crossings. Whereas in its brother, which feels even drier, you look for evasive options, but can’t always use them. After all, the roadway is not four meters wide. In the dictionary, there should be a picture of the two next to the definition for “bretthart”.

BUT, here at sport auto we’re not focusing on everyday comfort, but on sportiness. It’s about acceleration, lateral dynamics and the question of whether the work involved is worth it in this case – whether the measures are bearing fruit. Both the ACS4 M40i and the Supra appear more crouched, more powerful, more energetic. And both have been given a dash of malice as a result of the modifications. The others at the filling station look at them with even bigger eyes.

Both brothers are lowered by a coilover suspension. If you push it to the limit, they lose 30 to 40 millimeters in height.

AC Schnitzer has enjoyed a reputation as an expert in BMW tuning since 1987. In this case, the Aachen-based company makes one of the few exceptions to the rule, because it makes sense. The Supra carries the six-cylinder turbo from Munich – that cream of the crop. Both sports cars were developed hand in hand. The difference being that BMW built a roadster and Toyota a coupe. There are not a few who say that the Toyota has become the better BMW. A verdict that this comparison supports to some extent. Because in both cases the same means were used: Add-on control unit, suspension, exhaust, add-on parts for the body, wheels, interior jewelry.

Front splitter, side skirts and the two-part rear spoiler for the Z4 are intended to counteract lift. The experts added a second lip under the nose of the Supra and a wing at the rear based on two split struts. AC Schnitzer punched two carbon fiber “hood vents” in the engine hood, i.e. ventilation shafts to guide the engine exhaust air out of the fairing. The six-cylinder exhales at the rear here and there through an in-house sports exhaust.

Both move on 20-inch wheels. A coilover suspension lowers both. If you push its maximum, they lose 30 to 40 millimeters in height. To make it more tangible: In our test cars, which cost more than 90,000 euros with all the trimmings, there is a gap of around ten centimeters between the body and the ground. A thumb barely fits between the tire and the paint.

Z4 only tuned better than Supra 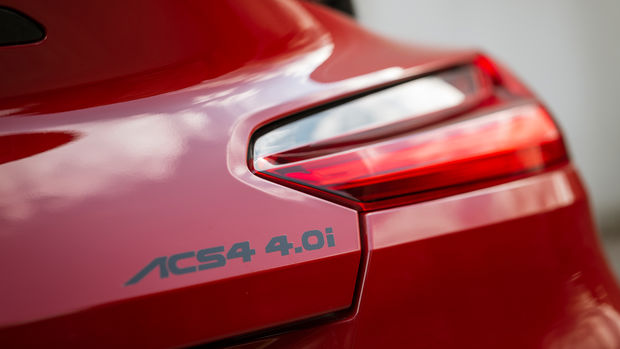 The Schnitzer Z4 is now as fast as the standard Supra was in the slalom in our 8/2019 test. It could probably have been a bit faster still if the roadster had also had the Michelin Pilot Sport 4S on its axles.

With the aid of an additional control unit, the output of the turbo engine increases from 340 to 400 hp. The maximum torque climbs by 100 to a total of 600 newton meters, which force the rear axle at 3,000 rpm. A rather moderate addition, but one that fulfills its purpose one hundred percent. Both sports cars accelerate better. They reliably deliver their performance. There were no dropouts either under full load during the test or in everyday use.

The standard engine already generates plenty of pressure at lightning speed. Now the crankshaft sweats a bit more. The twin-scroll supercharger responds to increased throttle input by getting straight to the point even at low engine speeds. From 2,000 revs upward, it heats up the Roadster and Coupé in particular. And this euphoria does not diminish until around 7,000 rpm, just like the thrust.

Just as in the comparison of the production brothers, the souped-up Supra is even zippier than the Bavarian with the soft top. The sports coupe sprints to 100 in 4.2 seconds and to 200 km/h in 15.4 seconds. Compared to the series (sport auto 8/2019), the redhead from AC Schnitzer polishes 0.2 and 1.5 seconds off the stopwatch respectively.

The Aachen-based company also raises the Z4 to a higher level: 4.6 seconds from zero to 100; 16.2 seconds from zero to 200 km/h. For classification, the values of the series Z4: 4.9 and 17.6 seconds – measured in the Supertest 10/2018. Longitudinal dynamics summary: The Supra has the more sensitive Launch Control, thus brings the power to the ground better and benefits from its weight, which is more than 60 kilograms lower. Only a retrofitted Z4 is faster than the standard Supra.

The Japanese is also ahead on the brakes and in slalom. The Schnitzer Supra scurries around the pylons at an average speed of 71 km/h – with a less action-packed rear end because of the harder suspension. As fast as the series Supra was in the slalom in our 8/2019 test, the Schnitzer Z4 is now: 70.4 km/h (series BMW: 69.5 km/h). It could probably have gone a bit faster if the Roadster had also had the Michelin Pilot Sport 4S on its axles – the slightly grippier successor to the Super Sport that the Z4 wore.

Less play in the rear 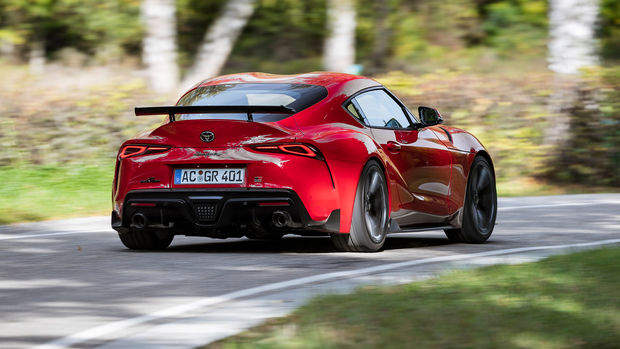 Both plaster country roads to the driver’s liking. Compared to the respective series models, it is noticeable that the body hardly wobbles. Turn in, minimal side lean, plenty of chassis stability, accelerate: Especially in curves with long radii, the Schnitzer Supra and Schnitzer Z4 shine with stability.

It applies equally to both that they meet curves with a firmer handshake due to the greater proximity to the road, that they bite harder due to the coilover suspension without being tense. The playfulness, which the standard Supra in particular has with its movable rear end, gives way to greater seriousness. Ultimately, the optimizations are aimed at injecting more power into the system. Would you rather have an agile rear end or a shorter leash and a rear axle that is more glued to the road? That’s something every customer has to decide for himself. Different driver, different preferences.

In any case, the BMW’s steering feels a bit more imposed, a bit more artificial. Throttle slips in alternating curves create a slight twisting-in effect in the rear on both. The rear pushes it in, so to speak, so that you can exploit the increased propulsion faster on the exit. In order for the rear fenders to take the air in a sideways pull, you’d have to steer in sharper and at the same time step on the gas more.

So a final thought comes up before the next bump: Upgrade successful, but on the race track it would probably need somewhat more stretched tendons in the respective musculoskeletal system.

Thanks to tuning by AC Schnitzer, the Z4 and Supra go through life more seriously. Both reliably deliver their increased performance. For my taste, the suspension has become too hard for everyday use – a little softer, with more play in the rear would be the appropriate middle ground.