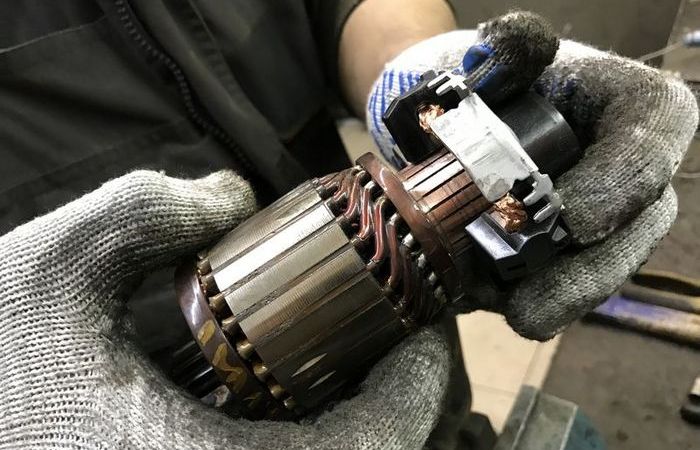 The starter car – it is essentially a small electric motor, which is connected to the crankshaft and flywheel with the help of an overrunning clutch. The most important part of the starter is this very overrunning clutch. It is needed to equalize the speeds of the shafts, which are meshed. When you turn the key to “Start” the relay throws forward the pinion, it engages with the flywheel teeth, cranks the crankshaft and starts the engine. What can be the problem if the key is turned and the starter doesn’t do anything?

Option one is complete silence from under the hood of the car when trying to start. Most often it is also accompanied by the absence of the glow of the lamps on the dashboard. If the case is exactly like that, the problem is most likely in car battery. Probably there is nothing wrong with starter. All you need to do is to charge the battery or in extreme case to use so called “booster”.

Option two. A slight buzzing begins to sound from under the hood of the car when you turn the key to “Start”. Crankshaft does not rotate, though instrument panel lights up all the lights. In this case, the problem is most likely due to the starter retractor relay failure. The bendix does not push out, which means that the rotating pinion can not catch the flywheel. In this case, it will be necessary to change the electrical relay. Normal it is replaced as a whole.

The third option of starter failure. A loud rattle or a loud whirring noise from under the hood can indicate a problem with the clutch bearing design. It is worth noting that this is the most popular starter failure in modern cars. The mechanism does not produce fixation of the shaft, due to which the clutch rotates, making loud noises. Before the breakdown, noises from the starter begins to appear in advance. Therefore, it is better not to delay the inspection and repair.

Option number four. If from under the hood you hear not a rattle or whirring, but typical clicks, and the engine does not react to attempts to start it, the problem is most likely in a short circuit of one of the power wires. Most often this happens because of burned contacts or moisture. In addition to replacing the wiring, it is advisable to give the battery terminals a good clean of oxide.