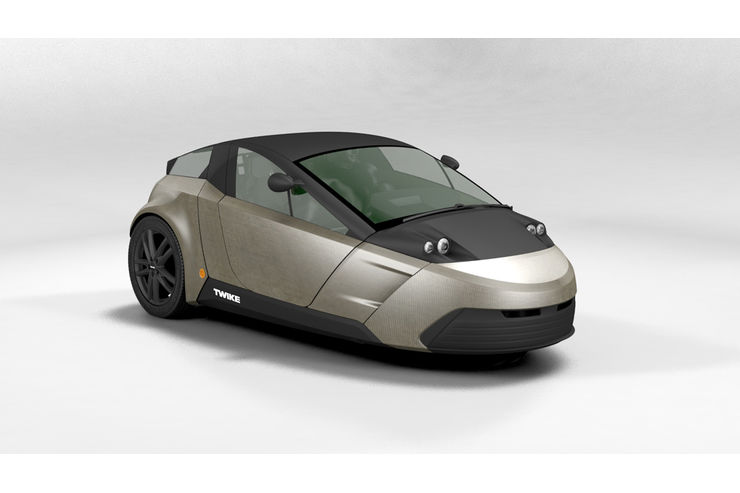 With the Twike 5, Twike GmbH shows that e-mobility is not only clean, but also beneficial to health. The tricycle is 190 km/h fast.

Already at the 2019 Geneva Motor Show, Twike GmbH presented the successor to the Twike 3, which sold over 1,000 units, the Twike 5. That? Yes, because the name Twike is made up of Twin and Bike, which in turn leads to the original idea behind this vehicle. First conceived in Switzerland and awarded first prize in a university design competition in Vancouver at the 1986 Expo, the tricycle is at heart a covered tandem with two seats installed side by side. But back to the future.

Drivable by Class A1, A and B license holders, the Twike 5 is said to be capable of speeds of up to 190 kilometers per hour. Of course, such a speed cannot be achieved by pedaling alone. The main drive is provided by a 150-kilowatt, 290-Newton-meter synchronous motor. Up to 20 percent – at city speeds – can be contributed by the two occupants pedaling up to 290 watts. However, the front passenger can only pedal if the owner has ticked an additional box when ordering. In the basic version, the co-pilot’s footwell is empty. Important for the co-driver: He can, but does not have to, pedal, even if there are any.

When ordering, the size of the battery must also be specified: 15, 20, 25 or 30 kilowatt hours. The maximum achievable speed of the Twike 5 also depends on the size of the batteries. Between 120 and 190 km/h are possible. However, not right from the start. V-max can only be raised after 5,000 kilometers have been driven. Until then, the car has to make do with a speed of 130. In addition, the suspension only takes place if the manufacturer deems the owner of the vehicle to be fit.

The order itself is preceded by production. This is a tricky issue, because although 1,072 orders (as of Dec. 30, 2020) have been received so far for the Twike 5, which is limited to 500 units, it was not at all certain for a long time whether it would ever be built. Because in addition to the goal of 200 orders, which was reached quite quickly, there was another prerequisite: two million euros. In the summer of 2020, the amount collected via crowdfunding called Twike Community Funding had already reached 2.7 million euros. The difference between this and conventional crowdfunding is that the project is not supported by donations but by an interest-bearing loan. The amount of the loan is determined by the donor. He invests the money as an interest-bearing down payment on a Twike 5 (range 250 km), which costs from 39,900 euros. The big brother with a range of up to 500 kilometers costs from 49,900 euros.

Steering wheel? No thanks

From the first glance at the chunky car tires, it’s clear that this 495-kilogram vehicle (320 kilograms without battery) has little in common with a bicycle tricycle. The frame is an aluminum space frame. The telescopic fork that was initially conceived has given way to a double-link swing arm with wheel bearing flange for classic passenger car rims, the doors swing open upwards and a steering wheel, regardless of its shape, is sought in vain. To ensure that the 3,325 mm long, 1,540 mm wide and 1,210 mm high two-seater nevertheless gets around corners, a double-lever steering system with bump-steer compensation is used. In other words, two levers to the right and left of the driver’s seat, which can be upholstered in Alcantara on request. Operation is extremely simple. If the left hand pulls the lever backwards, the Twike 5 moves to the left. If the right hand pulls the lever, the Twike 5 moves to the right. In addition, the speed can be changed continuously on both levers. And a cruise control button is also located on the left control lever. Additionally integrated into the heated grips are controls for turn signals, lights, windshield wipers and a scroll and select function for the screen.

The tricycle’s payload is said to be around 250 kilograms, the trunk can hold 300 liters and the interior is even suitable for transporting skis. The system-integrated charging power is 22 kilowatts, so up to six kilometers per minute can be recharged. One hour of charging on a three-phase 32 A charging port will therefore correspond to over 300 km of range. DC charging is likewise included in the base Twike 5 and charges the battery at up to 30 kW. The maximum range is over 500 kilometers. The current house record: 613 kilometers. In terms of ground clearance, the Twike 5 has 13 centimeters to offer. A “Dune” version with 18 centimeters is also planned.

Foiling is the new painting

One model leaves production in Rosenthal every day – a total of three employees make a Twike by hand. Twike aims to deliver 500 vehicles within a year. In which colors the Twike 5 can be delivered is quite easy to answer: “In every one that is available in foil form.” This is because Twike wants to save on painting and offers foiling.

On the subject of safety, the Twike 5 will not yet get airbags, but with its seat belts and roll cage, it should be considerably safer than a motorcycle. The side windows are also made of toughened safety glass (ESG) and can be opened from the inside while driving. The soft top material is convertible top fabric, with a hard top conceivable as an option at a later date. A particularly nice feature is that both the interior and the windshield can be heated remotely before driving off. The big question customers will ask is, “What about maintenance intervals and repairs? Can I do those myself?” Partly. Initially, the intervals are to be 1,000 kilometers for the initial service, once a year or every 10,000 kilometers. The target is 30,000 to 50,000 kilometer intervals. Wheel changes can be carried out in the garage at home, as can minor maintenance work. The installed LED headlights should survive the operating time of the vehicle.

Quite conceivable for city use, but the Twike 5 could also find a following in the countryside. The only problem is that riding a tricycle on the highway at up to 190 km/h isn’t everyone’s dream.