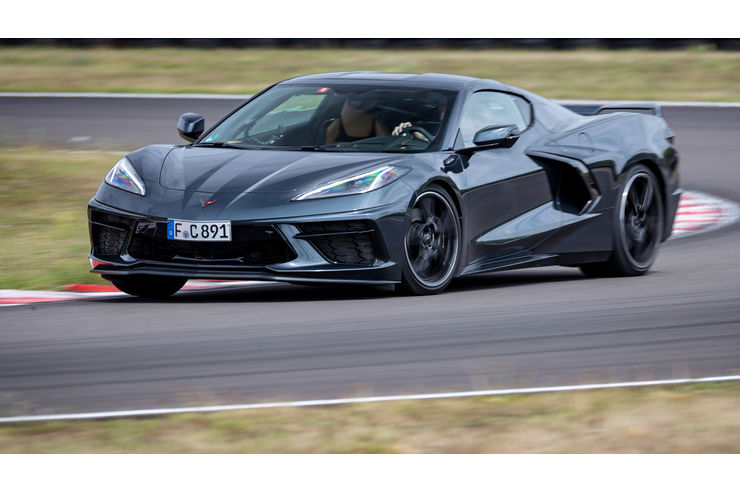 As a core characteristic of the occident – yes, there counts meanwhile also North America to it – is considered as well known that it goes down gladly times. And usually with a lot of noise, often several times within a short time, depending on which population or interest group feels particularly threatened. Corvette fans, on the other hand, haven’t been able to make up their minds since the C8 generation was presented about a year ago – for the first time with a mid-engine, oh dear, but then at least with a V8 engine without turbocharging.

The LT2 is a logical extension of its predecessor’s LT1 engine and is completely new, Chevrolet claims. Now it is muttering peacefully, translated from eighth gear of the dual-clutch transmission to a leisurely highway pace. At present, it doesn’t need to make use of its ability to maintain the dry sump-supported oil supply at a centrifugal force of up to 1.25 g. Not now, later. Also later: Standard measuring program at Lahr airfield, Handling-Gaudi in Anneau du Rhin, highway expertise in the Black Forest.

But, the developers promise that the Corvette Stingray is now much more comfortable than its predecessor. Because a new sensor system supplies the adaptive dampers with more information faster. Promise kept? Yes. In fact, the chassis responds with great ambition even to small bumps in quick succession, and does not get out of step even with transverse joints. Only the tires roll off harshly, of course, since they are part of the sports tire aura.

In any case, it can be criticized that although the seats provide gripping lateral support, they lack an extendable thigh support as well as the optimal position to the instrument panel. Even though you’re sitting deep inside the Corvette, you get the impression that you’re looking down from above at the arrangement of a twelve-inch driver information display and eight-inch on-board monitor – just an idea, but eye-catching. 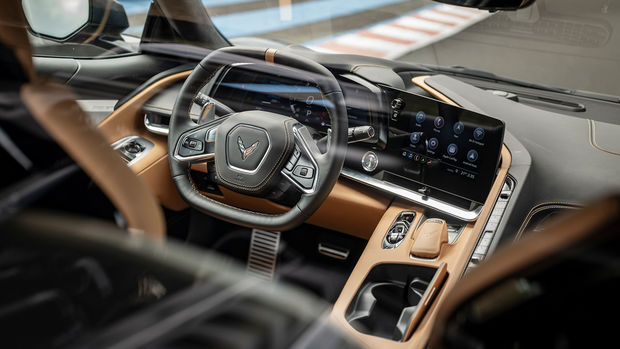 As if flattened steering wheels at the bottom were not silly enough … Otherwise: good usability

And the flat steering wheel? Yeah, well. May the will of the designer be done. It’s annoying when maneuvering, but otherwise the balance of the steering feel is more noticeable: pleasant holding power, more on the smooth-running side, plus immediate but not beastly response, good information flow to the wheels (19 inches in front, 20 inches in the back). Applies to all three available modes (Tour, Sport, Track) – provided their intended use is taken into account.

The driving modes in general: Four can be selected with the rotating wheel hidden under a chic leather cover – Weather, Tour, Sport and Track. The latter includes five more modes to gradually loosen up the driving dynamics control systems: Wet, Dry, Sport1, Sport2, Race. And yes, the final escalation stage: everything off. The transmission shifts down three gears, the 6.2-liter engine, which remains as powerful as ever, cheers with a thunderous roar, likes to turn, but not very intensively, and the transmission is ready for the next gear at 7,000 rpm. 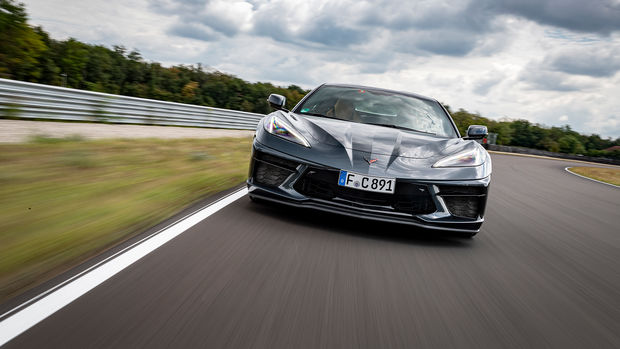 The C8 weighs 1,651 kg despite the new aluminum chassis and rear carrier made of carbon fiber composite material.

The Launch Control pre-tensions the drive train, the optimum speed settles down and the Corvette lifts itself out of the block. In 3.4 seconds it shoots over 100 km/h, after 12.7 seconds it reaches 200 km/h. Factory specification? Not yet available for the European specification. So the C7 has to serve as a reference, which accelerated to 100 km/h in 4.5 seconds, to 200 km/h in 15.0 seconds with the seven-speed manual transmission – and weighed 1,577 kilograms. The C8 weighs 1,651 kilograms despite the new aluminum chassis and rear carrier made of carbon fiber composite material. Too much? No. Rather the width, which increased from 1.89 to 1.93 meters.

After all, the mid-engine layout provides a clearer view to the front, and you no longer have the feeling of having to circle an overseas container through the pylons in front of you or position it optimally at the entrance to a bend. Only one nightstand left. Fine. Because waving, stepping, dancing, yes, she likes that now that the short-stroke two-valve engine lives in the center of the sports car. Doesn’t sound like Corvette, does it? That’s right. Salsa instead of wrestling, filigree instead of brute. 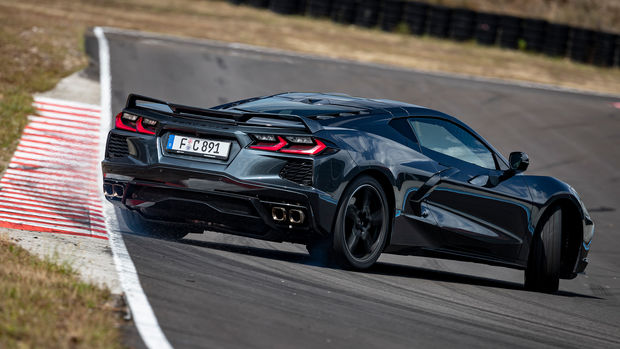 Where the Corvette previously hung securely on the ideal line, the rear end now wipes away after deactivating the control systems.

The weight distribution alone: 40 to 60 instead of 50 to 50. If you need a little oversteer, you can now change the load better than by slapping the right pedal. And that works – every time, even when the 245 front tires reach their grip limit. This happens sooner than you would like, but hey, we’re still talking about the basic model. And in the slalom and swerve test disciplines, it moves into the league of progressive-tyred Porsche models or the Audi R8 upgraded with performance accessories.

That still leaves the braking power. Because of an average deceleration of 11.5 m/s², nobody complains, especially since the performance remains constant, but the competition does deliver over 12 m/s². Chevrolet now uses an electric instead of a vacuum-based brake booster. This enables the engineers to store different characteristics for the brake pedal. In any case, the brake pleases with its jagged response and transparent pressure point. In track mode, now on the Anneau du Rhin circuit, at the very back before the right-hand bend that spits you out onto the long forest straight afterwards, the display even informs you about the active ABS. But if you don’t notice it in the sole of your foot, you can earn your money by traipsing over glowing coals in front of an audience.

Paste of all classes 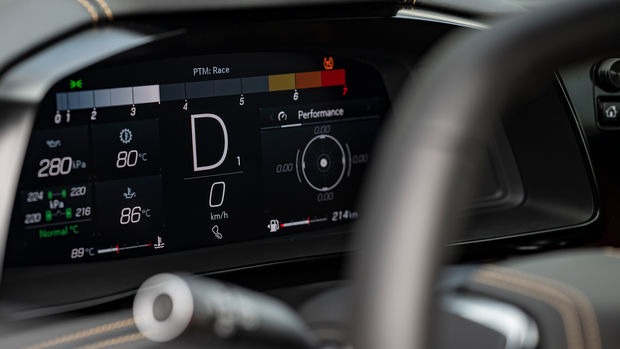 There is no lack of detailed information, including the working status of the limited slip differential and the transmission temperature.

After the casual approach, the Corvette likes to go on the attack, to dive into curves, to climb out along their radius, to bury the next straight under the bass scream of the V8 engine. Whether medium or long radii – the mechanical traction reaches a staggeringly high level, to which the electronically controlled limited-slip differential integrated in the transmission contributes significantly. And it’s only when you turn off all of the control systems that their application quality becomes apparent: where Corvette was previously hanging securely on the ideal line, the rear end now wipes away – without you feeling you’re being maneuvered by the loss of power.

Rather, you notice that the steering replaces the last percentage points of precision with a certain wadding, as you move the steering wheel slightly to get clarity about the steering angle. It is also clear that the borderline is narrow, the beyond infinitely dark. Nobody should reach this limit on a country road, rather the limit of the road, because of the width.

Roof off, wind in 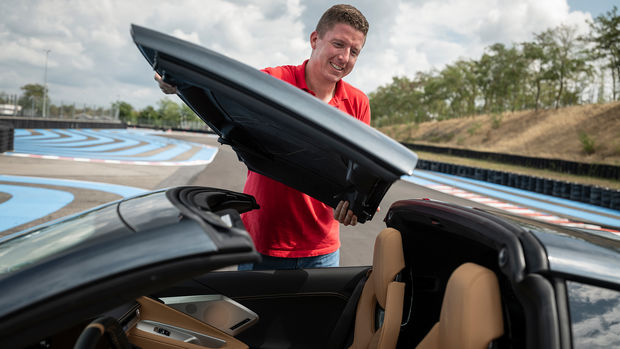 For the way home: out with the roof center, a tradition of the house

The newly gained looseness around the hips, however, opens up the side roads of the Black Forest for the Corvette, preferably with the middle part of the roof stowed in the trunk, then the engine sounds even more beautiful. The transmission manages perfectly on its own both here and on the race track, always finding the right gear at the right time. Rather manual? No problem, the reaction time to shifting commands is as short as the gear changes, but they could be a bit harsher when attacked.

But not now. Now the wind rushes through the cockpit, sweeps over the exalted air conditioning keyboard, mixes with the magnificent engine sound and the unusually fluffy handling. The Corvette is now no longer itself in the sense of its predecessor. It is different. Above all: better, because it is fascinating in a universal way. And even if it crunches out of the door panels: the reconstruction of the Occident can now be started and quickly completed.

Unfurnished and heavier, the Corvette drives more filigree, agile and at the same time more comfortable than before. The drive is inspiring, and so is the price-performance ratio. Ergonomics, steering and workmanship less so.