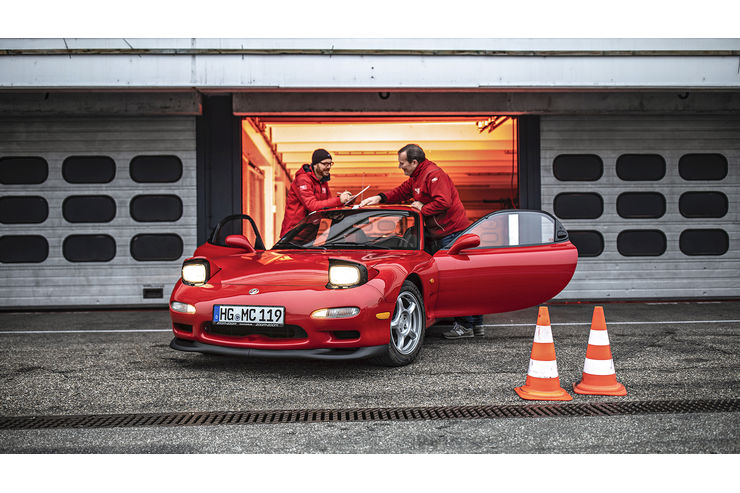 It is one of the privileges of the future to lie in the unknown; its true nature only becomes apparent when it is already past. Only then will you know whether they were worth it, all the efforts you made for them, all the hopes you placed in them. Or whether another influence was much more powerful: that of chance. My goodness – in the gray morning darkness on the A6, with the sunrise still hanging somewhere over Istanbul, the thoughts are still tumbling through my head in a very unsorted way.

Actually, this story begins around noon on Friday, August 7, 1992 – the publication date of issue 17 with the test of the RX-7, written by the great Clauspeter Becker. That’s when I arrive at the certainty, as firm as one can attain only in the naive self-assurance of a 14-year-old, of driving such a car in the distant future.

Back to the future

If this were a movie, there would now be a cut to the early hours of the 9982nd day after. A hand rests on a light switch, a brief, initial flare, then a glare of neon lights in the underground garage. In one corner, the light casts the silhouette of the RX-7 against the bare concrete wall. Get in, turn the key, and at the same moment that the Wankel engine starts up, the headlights flip up. The RX-7 pulls out of the parking space and up the driveway. Very briefly, it bathes the garage in a bright red light as it brakes just before the roller shutter door, but already sweeps under it before it has even wound halfway up. We’re on our way. The distant future? Is right now.

Beautiful times, when the headlights still worked on the sports car.

The lights of the city flit mirror-like across the gentle hills of the hood, soon the glow of the last streetlights strobes across the paint, the highway stretches north, soon west. The day is still night when it really begins in Hockenheim: refuel, wash, over to the Motodrom, measure the interior, to the scales, install the measuring electronics.

The RX-7 is a small car: 4.30 meters short, 1.76 narrow, 1.23 low, and 1,292 kilos light. Everything is weight-optimized: Hood made of aluminum, the double wishbones front and rear made of forged light alloy, engine and transmission housings made of aluminum, as well as brake and clutch pedals, and even the jack. At 652 to 640 kilograms, the weight between front and rear is perfectly balanced, even with the crew sitting exactly in the center. So that the honored clientele doesn’t ruin the power-to-weight ratio, Mazda limits the payload to 198 kilograms, which Otto, the gauges and I together are already pushing very considerably.

The legend of the trochoidal

Behind the front axle sits the engine. It is a two-disc rotary piston Wankel with twice 654 cm³ chamber volume (calculated for rotary piston engines with trochoidal after the formula: three times the square root of three times the radius of the base circle times eccentricity times chamber width times number of rotors. And aren’t these exactly the words you say to your beloved partner far too rarely, especially in a long relationship?) 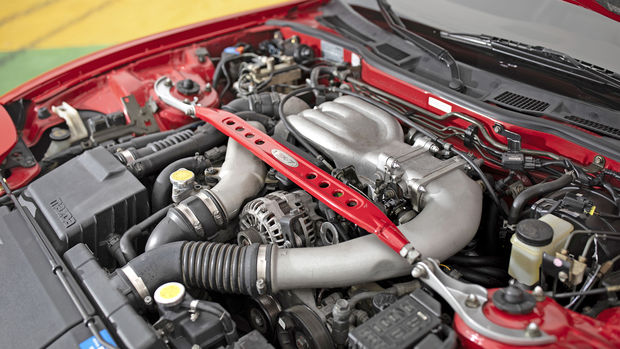 Can the Wankel turn? It doesn’t want to stop.

Now, in “The Old Man in the Test” we had all kinds of terrific reciprocating engines at the start: two-, four- and six-cylinder boxers, four-, six- and eight-cylinder naturally aspirated inline or V, inline fives and six-cylinder boxers with one or two turbos. But friends, this Wankel, puffed up at 0.35 bar by two Hitachi superchargers connected in series, is the most all-sensational engine of all.

Without the slightest start-up hesitation, the Wankel tours off, pushes forward without vibration and without any effort, and one after the other it climbs up the revs: four, five, six thousand. Seven thousand, and you think it must have had enough. But it doesn’t, it just keeps going and going past the eight thousand mark, where a little “bing” reminds you to shift into the next gear. 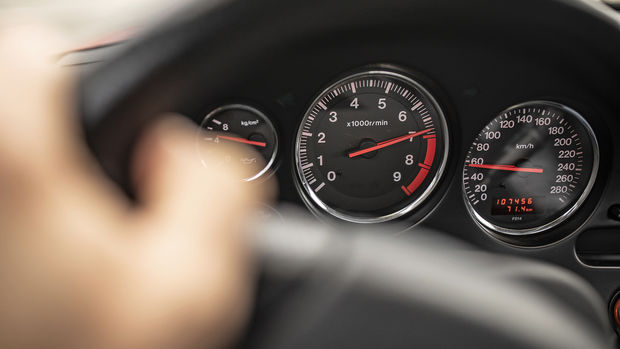 The Wankel engine spirals up the revs with a lively enthusiasm that only the limiter can curb.

After all, there are five gears to be toured, which are arranged in closely spaced lanes and perfectly graduated, and can be sorted through with exactly the right amount of sluggishness that makes mechanical precision tangible. Yes, the RX-7’s drive is intoxicating, even at the most boring of measurements – that of the speedometer deviation. Then we survey the interior noise. And although the engine sits close to the cozy cockpit cabin, the Wankel remains not only enormously refined, but also quiet.

A “bing” of impossibility

And strong. Jeez, Mary and Joseph, it’s strong for 240 hp! Nowadays, every mid-range compact SUV (Skoda Kodiaq RS) that comes along is in this performance range. But performance is not just energy divided by time, but what you make out of it. Now, at the beginning of the acceleration straight, the RX-7 uses it to shake up a few dimensions, even to shift them. Revs to 4,000, clutch snaps, a brief scrape of the tires, then the Mazda gets going, the engine revs 5,000, 6,000, 7,000, bing, second, six, seven, and even before the second “bing,” the RX-7 is rushing past the 100-km/h mark and on and on to the end of the measuring distance. 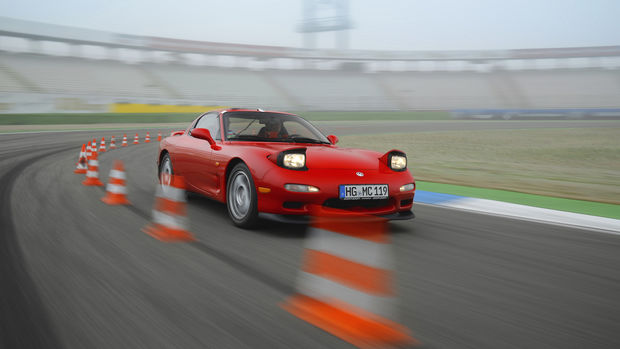 Only then do we have time to realize how fast it was: 6.4 to 100. In the first, still cautious sprint, it was faster than in the last test in hot August 1992. In the second, more energetic attempt, it managed an even six-zero, half a second faster than before. We’ve only had that once before with an “old car on test,” the Porsche 959. Because the Mazda is in the best company, we let it go with the acceleration.

And then the RX-7 also excels at braking. In 1992 it set a new record in auto motor und sport, and today it still stops excellently with a deceleration of 10.7 m/s². The driving dynamics are even better. This shows once again that it is not performance but handling that makes a sports car. Perfectly balanced, it sweeps around the pylons in a neutral manner for a long time, but always with a soft, dynamics-enhancing rear-end thrust.

It’s all so easy, so simple, so precise because of the smooth, responsive and precise steering – and also because of the clear shape. The RX-7 can be positioned with centimeter precision via the edges of the wheel arch hills.

Future? Shall be patient

Later, on winding roads that by no means lead directly home, you feel even more how powerful, how grippy the Mazda accelerates out of bends, also because of the Torsen limited slip differential on the rear axle. Yes, there’s always a bit of Le Mans in the RX-7, even the L 618 between Heidelsheim and Oberacker feels like the Hunaudières. After all, the RX-7 may not have all the technology, but it does have an enormous amount of knowledge gained from Mazda’s victory in the 1991 24 Hours of Le Mans with the 787B Group C Wankel race car.

At the time, it managed a distance of 4,923 km. We probably won’t get that far today. And after the consumption lap … oh dear, who brought up the tiresome topic of fuel consumption so close to the end? Didn’t we say that we would try to elegantly maneuver our way around it? So where were we? Oh yes, tomorrow after another insignificant measurement the RX-7 has to go back. Whereby – why should we care about tomorrow today with this hero of yesterday. A future that has been so long in coming can now be patient.

Bodya design as only the love of the automobile – and other beguiling things – can shape itCrew sits snugly in the center of balance
Folding headlights!
so compact, so narrow, so uncluttered
Low-volume cargo area is in harmony with minimal payload
driving comfort
the comfort of owning such a grandiose car dampens all the harshness of the suspension
a gently recumbent seating position with the steering wheel interestingly placed near the thighs
Drive
powerful, turbine-like, high-spirited biturbo Wankel, braked only by the limiter
precise, appropriately sluggish five-speed manual transmission
Driving characteristics
agile, beastly handling
lateral inclination increases the feeling of dynamics
Precise, responsive steering for the hands-on driver
Safety
with safety? Is the RX-7 underestimated in its speed
Environment
Traditionally, this Wankel also demonstrates experienced handling of fuel and lubricants.
Costs
Mazda has spared no expense or effort with the RX-7.

We only have five stars. Two for this sensational engine, one for the little “bing” at the rev limit, one for the handling and one for the way the RX-7 beats up vain sports car rivals without any airs and graces.