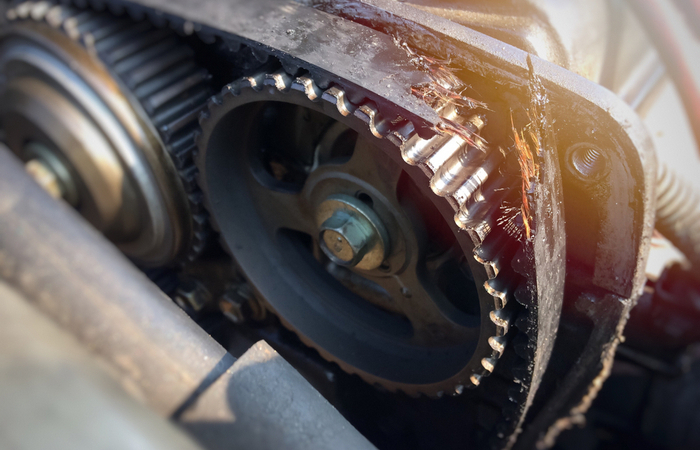 A number of important components in a car need to be changed in a timely and regular manner. One of these is the timing belt. Some auto mechanics jokingly distinguish two states of this part: “whole” and “torn” belt. Alas, it is not so easy to determine, when an important component is breathing on dirt. If you do not want to get into an extremely unpleasant situation on the road, it is recommended to check the condition of the belt from time to time.

Is the pump leaking antifreeze? Are there any identifiable leaks at the crankshaft or camshaft oil seal? The mentioned characteristic traces near the timing belt or maybe the leaks even began to flood it? Although all of the above options for technical fluid leaks are not due to the timing belt, each of them individually indicates that the belt needs to be replaced. Why? Because fluids contain corrosive chemicals that degrade and destroy the material in the belt. Of course, if you find yourself in such a situation, you must first identify and repair the problem of the leak.

What signs in the operation of the car indicate the need to replace the timing belt?

There are many indirect signs in the performance of the car that may indicate the need to replace the timing belt. Some of the most popular problems include delayed or weak car response to the gas pedal, worn pulleys on the camshaft and crankshaft, detonation when the engine stops, and leaky oil seals. There are also other indirect symptoms. There are dozens of them in total, but all of them, as a rule, appear together with the above mentioned problems.

How do you know if there is a problem with the belt?

A secret knowledge, inherited from our ancestors, says that there is no better way to detect problems with the timing belt than a good old-fashioned visual inspection! Let’s take off the cover, get an access to the belt, and after that we look closely at its condition. “Razor chipping”, cracks, scratches, tears, toughening – all this, especially in a large quantity should inspire the motorist on the thought that it is time to think about replacement of the timing belt. You should carefully check the bending places, there microcracks and other defects will be seen the best. You should also consider the life of an important component. Depending on the model and manufacturer, timing belts last 50-100 thousand km of mileage. A rare product can last up to 120 thousand km. Therefore, it is best to change the part somewhere in the range of 60-80 thousand km.