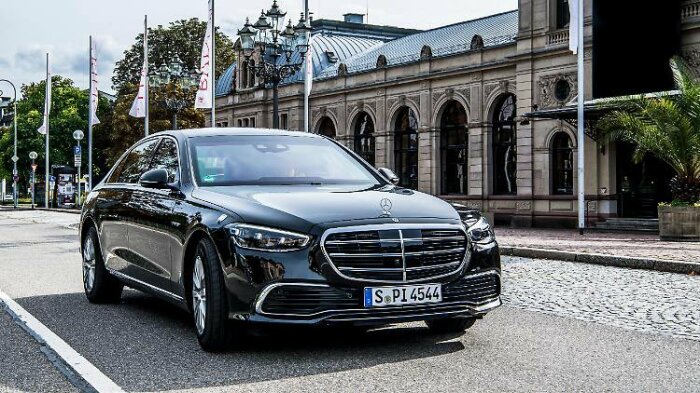 On December 8, 2021, Olaf Scholz succeeded Angela Merkel, the third longest-serving leader of the German government and the first female chancellor. By the way, the absolute record holder in the mentioned position was Helmut Kohl, who was in the Chancellor’s chair for 16 years and 26 days. However, today we shall speak not about it, but about cars. More precisely, what official car the new head of the government of Germany drives.

Only two predecessors of Olaf Scholz allowed themselves “impermissible” liberties when choosing a company car! Most of the German chancellors used Mercedes-Benz cars. Only Angela Merkel and Gerhard Schröder went to work by BMW, Audi and Volkswagen, thus breaking the chancellor’s tradition. Apparently, they picked up bad habits in pioneering and Rosneft’s board of directors. Scholz, on the other hand, drives a Mercedes-Benz S 680 Guard 4Matic on matters of state importance, as he should.

Of course, the chancellor’s car is equipped with security features. Interestingly, the “liverwurst” (so recently called the politician) Germans are apparently more careful than Angela Merkel. After all, Olaf Scholz’s company car is certified with the highest VR10 protection parameter. For comparison, Angela Merkel’s car only had VR10-certified windows, while the rest of the structure was covered by VR9-level protective elements. However, cars are not loved for their armor.

The Mercedes-Benz S 680 Guard 4Matic is an armored version of the latest Mercedes-Benz S-Class to date. The executive car is powered by a gasoline 6-liter V12 engine with 612 horsepower and 830 Nm of torque. The flaming motor works together with a 9-speed hydro-mechanical automatic gearbox. Because of the increase in weight of the car due to installation of protective elements, the “automatic” S 680 had to be additionally reinforced.

The body of the new armored S-Class has been designed from scratch, so there were added reinforced struts. The armored body of the car is made of composite materials. The thickness of the armored glass is 10 mm. The side windows are equipped with special hydraulic elevators. This makes it possible to open and close the windows from inside even when the vehicle’s engine is stopped. There are also autonomous communications, oxygen supply, fire extinguishing system and special signals control panel in the cabin. Due to the presence of special stuffing, the volume of the trunk of the S-Class had to be reduced to 390 liters. The car also has a tire inflation system. Scholz car can drive on a punctured tire for another 30 km at 190 km/h.

Exactly how much does the Mercedes-Benz S 680 Guard 4Matic cost, we can only guess. The cars are made exclusively for top officials and the wealthiest people. The price is not a secret, but it can seriously vary depending on the stuffing. A “naked” factory Mercedes-Benz S-Class costs about 550 thousand euro.