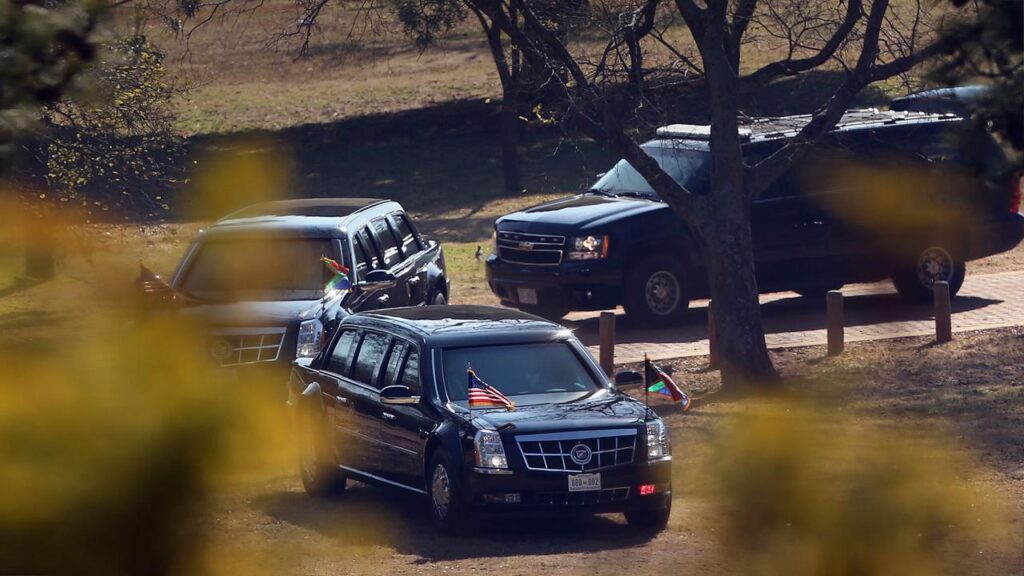 The US President’s motorcade is both the safest and the most dangerous convoy in the world. In fact, it is the White House on wheels: it includes special forces, jammers, Cuckoo cars with government communication equipment, and even a special van to carry the “nuclear button”. The Drive magazine told about cars of the motorcade of the head of the United States.

The President’s motorcade is made up both of cars refined by the Secret Service and attached directly to it, and of specially leased cars for specific purposes. Usually the motorcade includes limousines, SUVs, and escort vans. All cars are delivered to the destination point by military transport aircraft. Moreover, if the president needs to visit three cities in one day (which is the case, for example, during an election campaign), a separate plane with a separate convoy is sent to each of them in advance. 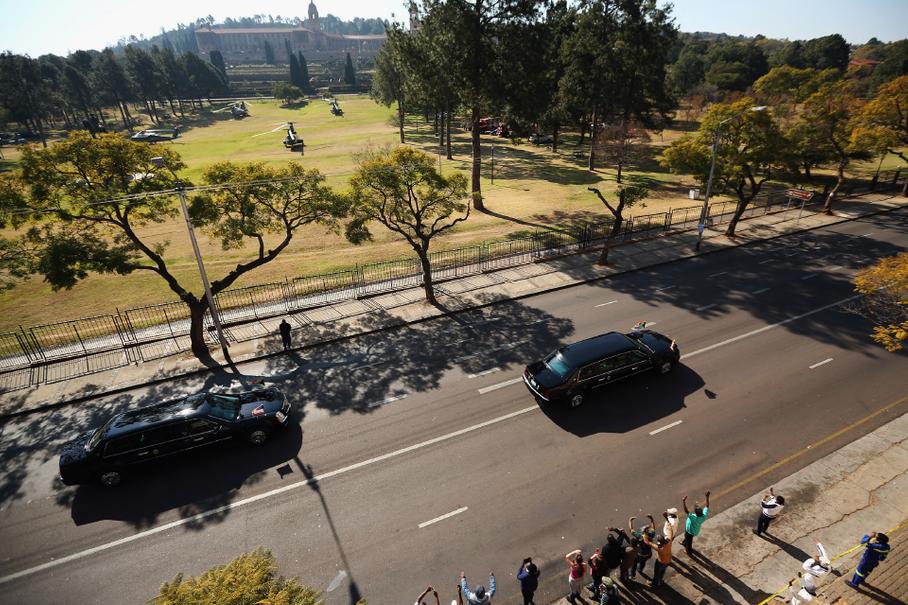 The exact number of presidential limousines assigned to the Secret Service is unknown. Presumably, there are between 16 and 20.

In addition to cars, two helicopters, a VH-3D Sea King or a VH-60N Black Hawk, are usually brought to the city where the president is staying. The helicopters are delivered by heavy “transporters” of the U.S. Air Force, even if they will not be used during the president’s visit: they may be needed for evacuation in an emergency situation. 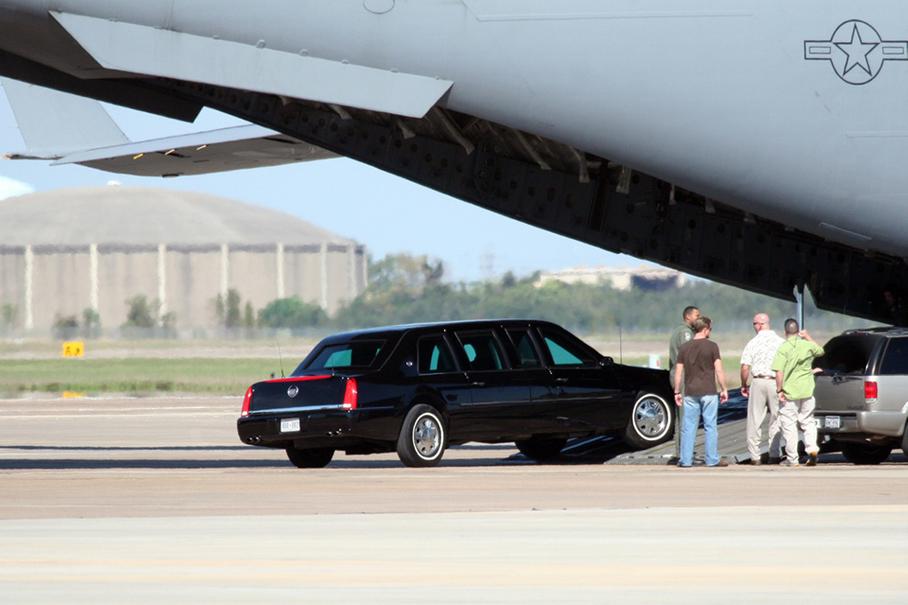 Several military “transporters” are needed to support one presidential visit, and they are very expensive for the government. The vehicles are transported by C-17 and C-5 Galaxy aircraft.

In front of the motorcade are the Route Car, the Pilot Car, and the Cleaners. They appear a few seconds before the main part of the convoy, conducting a preliminary “reconnaissance”. Usually they are police sedans and motorcycles, but sometimes there are Secret Service SUVs or military Humvees – such a scheme is used, for example, in “hot spots”.

The Cleaners are followed by the Secret Service Lead Car, which forms the convoy itself – often a Chevrolet Suburban SUV. In some cases, a rental car is added – as was the case, for example, during the U.S. President’s visit to Great Britain, when a BMW 7-Series was included in the convoy.

The super-armored presidential limousine, internally codenamed “Stagecoach”, follows directly behind the “Leader”. To the rest of the world it is known as the “Beast”.

This car, a special design Cadillac built in 2009, which has almost nothing in common with production cars and is equipped with all sorts of ingenious systems, even has an air purification system in case of a gas attack. In addition, the limousine contains a blood supply for transfusion, the group of which is identical to the President’s, devices releasing smoke screens, and infrared vision devices. 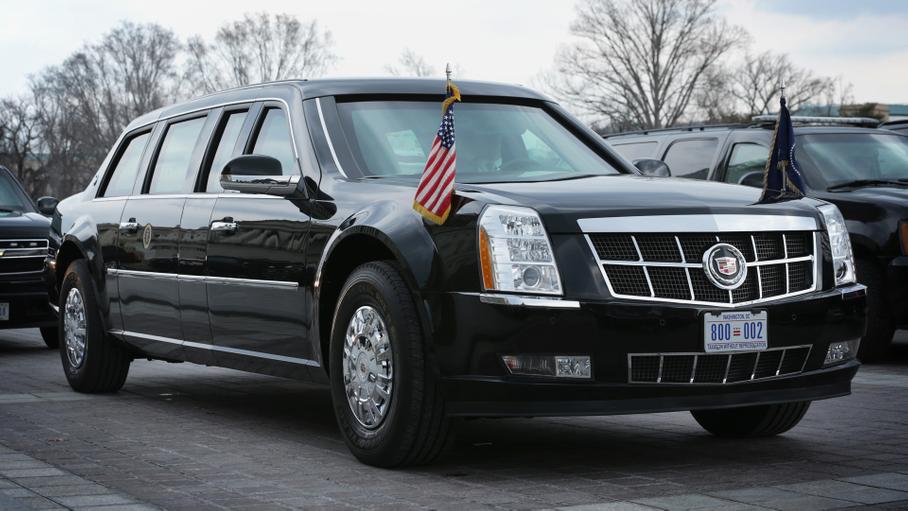 The presidential limousine is so cool that it knows how to leave behind oil stains, a “gift” for would-be pursuers.
П

“Stagecoach” is accompanied on the left and right by two similar “spare” limousines. They are exact copies of the main car – the Secret Service even puts the same license plates on them. This is done so that attackers cannot tell which car the president is sitting in.

When for some reason the limousine is not used, the president drives an armored Chevrolet Suburban, which is a little more modestly equipped. Usually the Secret Service drives the vice presidents in the same Suburbans. And when it comes to traveling around the country, the head of state can use a large armored bus called the X3-45 VIP 3. 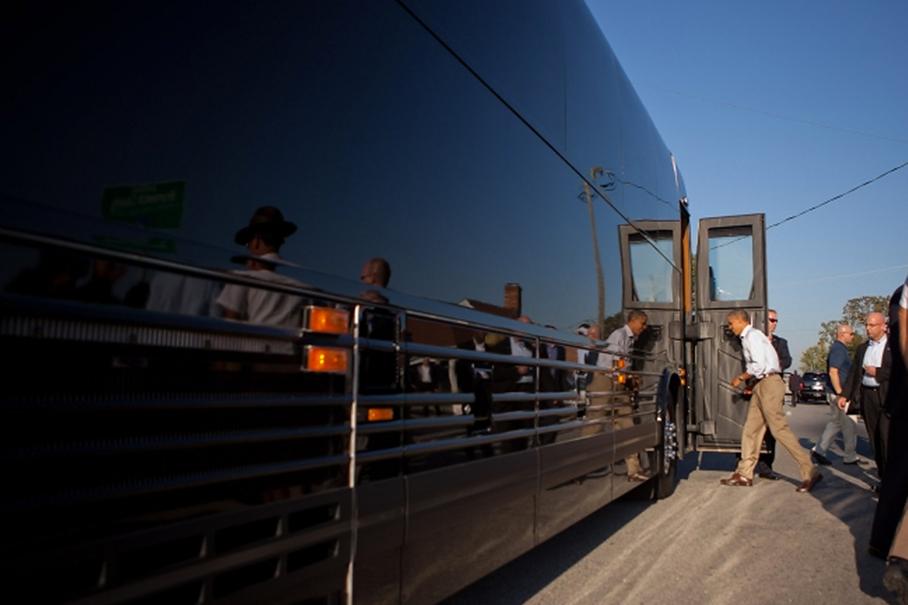 Two X3-45 VIP 3s were built for the Secret Service. The cars were prepared by Prevost Car and Hemphill Brothers Coach Company.

Immediately behind the presidential car or bus rides the president’s personal security guards in a Chevrolet Suburban with red and blue “blinkers” – this car, to put it in soccer terms, is called a “Havbek”. Usually, this car is driven with the rear windows open and the trunk door window up, for the fastest possible reaction in case of an attack.

An SUV with a personal guard is followed by a “jammer” car called a “Watchtower.” Chevrolet Suburban SUVs with multiple antennas on the roof usually serve in this role. “Jammers” suppress all kinds of signals, are able to recognize laser guidance and even “see” drones. 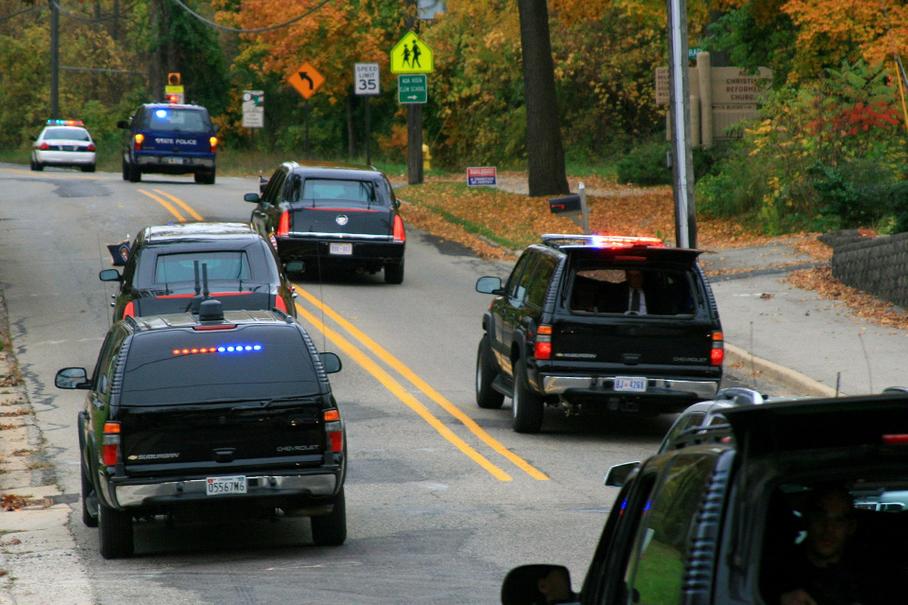 The car on the left is a “jammer” accompanying the president. Similar antennas mounted on armored vehicles have saved more than one tank crew from land mines during campaigns in Iraq and Afghanistan.

Behind the Watchtower move vans or SUVs that house the remaining personal guards, the president’s personal physician, and the “nuclear suitcase.”

Next in the convoy are the very dangerous guys, the Secret Service Special Forces. They will be the first to engage in the event of an attack and will cover the president with fire until he is evacuated. Like the personal guards, these goons drive around with their windows open. However, unlike the guards in business suits, the Special Forces are dressed and equipped accordingly – with sniper rifles, automatic weapons, and stun grenades. 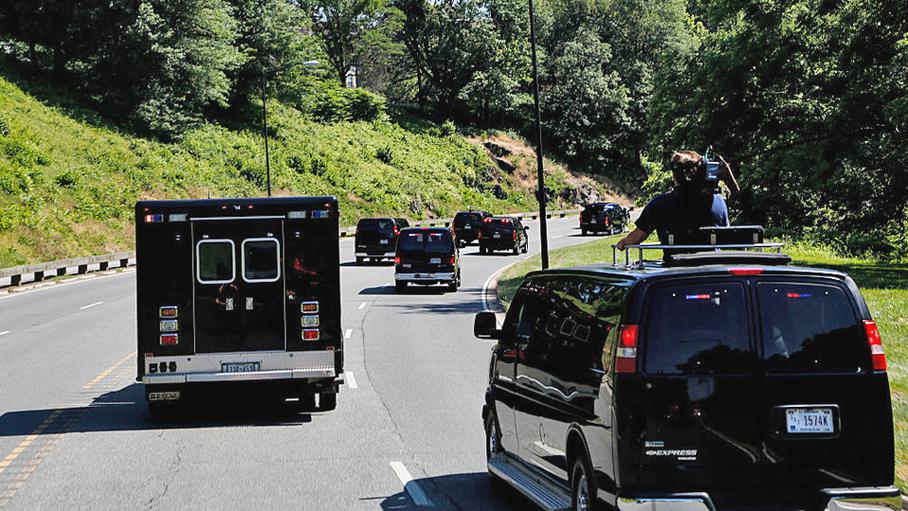 Immediately behind the SWAT team is the second reconnaissance vehicle. But while the “Cleaners,” who open the convoy, keep an eye on the road situation, these men are in constant communication with the local police and plainclothes officers deployed along the route. They have to solve the problem before it even occurs.

Following the “scouts” is the convoy’s most secret vehicle, a black ambulance-like van carrying something to save the president in case of a biological or chemical attack. Its purpose is to “mitigate the effects of hazardous substances. What’s inside there and how it works is a big secret.

In the very “tail” are the cars of the press service, as well as the “Cuckoo” – the Suburban with the means of government communication, thanks to which the president is in constant contact with the rest of the world. Or with the Pentagon. The “nuclear suitcase,” depending on the situation, can also be carried in this car. 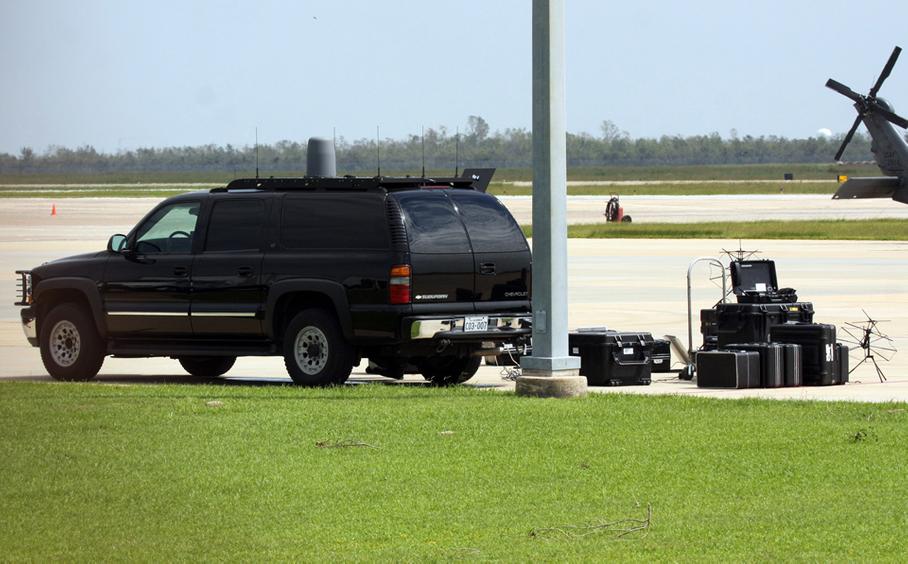 The government communications SUV, the Cuckoo, can be identified by the antennas and the “hump” on the roof.

But no matter how coolly equipped and protected the motorcade of the U.S. President, it is “covered” by the most ordinary police officers in patrol sedans and motorcycles, and a perfectly ordinary ambulance. The Secret Service has not yet invented flying angels with black glasses and defibrillators. Not yet.