Traffic jam questions – riddles of traffic history solved
Why does the truck have a cat flap?

Nowadays, parents can confidently answer questions from the back seat about the meaning of the BD-13 license plate “of that car” via smartphone. That leaves the scary questions in traffic jams: The kids want information about something technical.

Today’s final opponent: “Dad, why does the truck have a cat flap?” Moments of silence follow in the front row, anxiously glancing from seat to seat without turning their heads. No suspicion of perplexity should germinate in the rear.

There are cat flaps in campers and motor homes. Not in truck trailers – at least not as standard.

Correctly identified: All wrong. And those who answer the offspring’s questions in the style of number 6 should not be upset about the consequences later. By the way, answer number 4 is somewhat on the trail of the truth about this flap.

If a truck, trailer or other body has such a flap in the large portal, then it is usually refrigerated or cooling vehicles. Since their doors close very tightly, if the temperature rises after unloading or if the vehicle is empty without refrigeration, the air would quickly become stale and germs would form as a result of condensation. Just like when the refrigerator is turned off and the door is closed. The flap is used to ventilate the cargo area when it is not in use or the cooling system is not in operation. 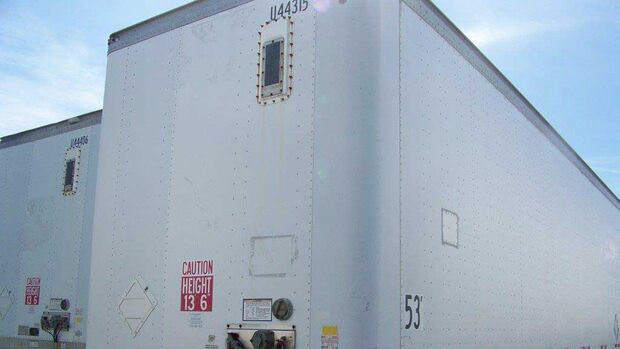 You cannot simply reach in or look through the flaps: They have either a grille inside or out or a labyrinth of sheet metal to prevent foreign objects from getting in.

There are two hatches

The open tailgate vents during travel solely through the negative pressure of the airstream behind the truck. Attention, black ice. In fact, the rear flap has a twin at the front to ensure ventilation. After all, anyone who has ever driven a motorcycle or convertible very close behind a truck on the highway knows that there is virtually no airstream there that could create a vacuum. Even if no one does, because of the safety distance and so on.

The thought suggests that answers 1 through 6 apply, at least in part, to these ventilation or vent flaps. Even if it wanted to, the cat wouldn’t get through, because the flaps don’t just go through the rear portal, but have either a ventilation grille or a stainless steel maze behind them to keep cats out of the cargo area, among other things. An additional, small hurdle for the supposed “peek in” or “do something no matter what” is the thickness of the door: To insulate well, the wings are at least 45 millimeters thick. What’s more, with a full load, you would only be able to see the load through this door if it was right in front of the flap. So as a control flap, the ventilation opening is no good for many reasons.

For a truck to be classified as a refrigerated vehicle, the insulating walls must be at least 45 millimeters thick. Built this way, the body of an air-conditioned vehicle may be up to 2.60 meters wide – without mirrors. Five centimeters more than an un-refrigerated vehicle.

Regulations for the maximum track width and wheelbase of trucks have existed since 1908, and from 1930 a maximum width of 2.25 and 2.35 meters was permitted. By the way, trucks with trailers for transporting goods are allowed to be 18.75 meters long, and 20.75 meters is legally possible with overhanging cargo. So-called gigaliners are even allowed to stretch over 25.25 meters.

Trucks and tractors are completely different things, by the way. Trucks are only allowed to pull one trailer. Tractors two, meaning tractors and similar vehicles with LoF (agriculture and forestry) registration.

The BD-13 license plate mentioned at the beginning belongs on a car owned by the Federal Ministry of Transport and Digital Infrastructure. Maybe the minister himself.

If you don’t shine now in a traffic jam when it comes to truck trailers, no smartphone will help you. Next time, we’ll explain sayings like “Red never stands alone” and “Doesn’t drive under 5 bar.”