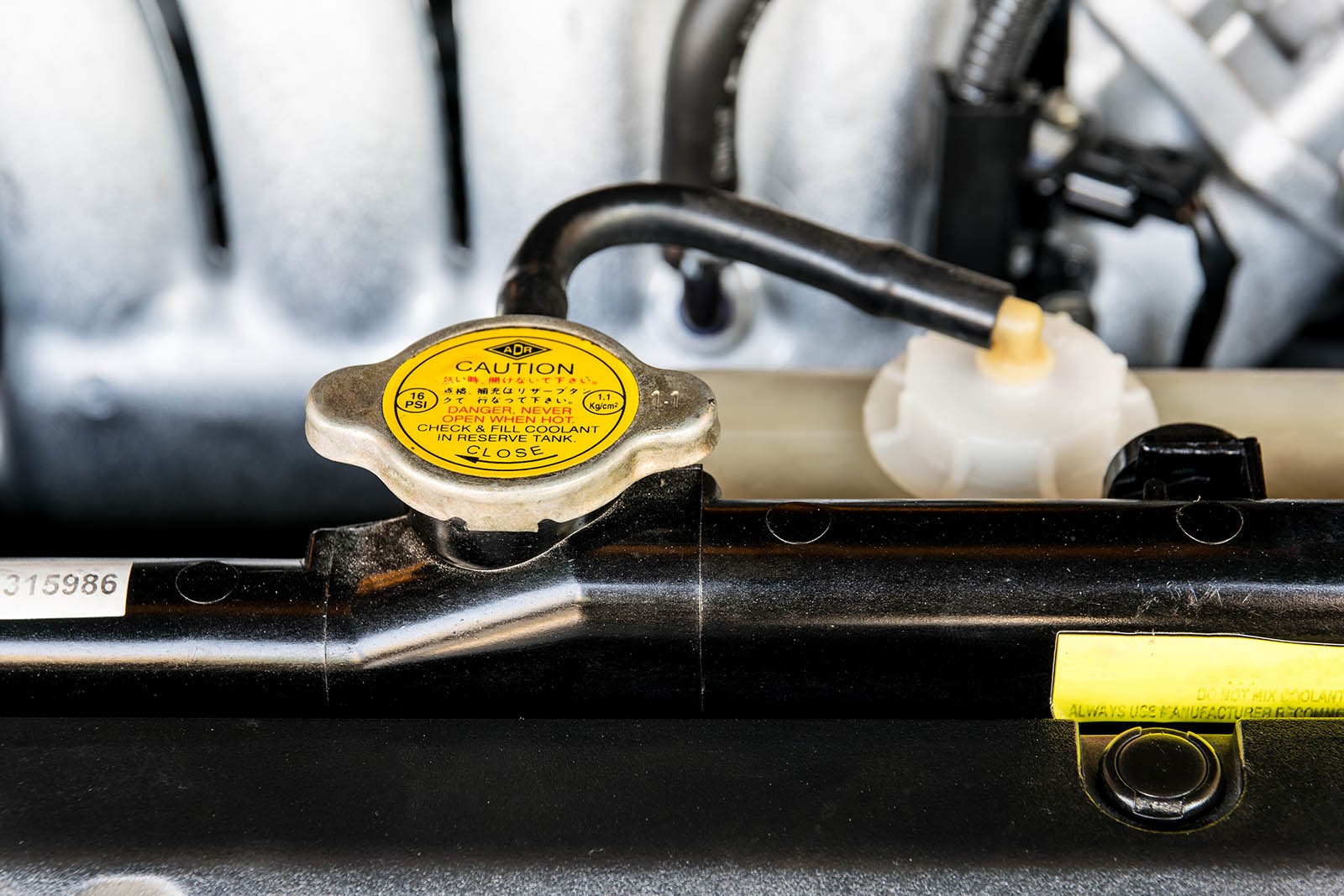 The boiling point of water at atmospheric pressure is the well-known and canonical 100 °C. Ethylene-glycol antifreeze under the same conditions – 105-107 °С. However, as the coolant’s boiling point gets higher under increased pressure, it purposefully creates pressure of about 1,2-1,5 atm in the engine cooling system. Due to this, the boiling point of the antifreeze moves to 120-125°C and even higher, and “hot” motors (which became the majority in the last 10 years) successfully maintain a stable temperature without the risk of the coolant boiling under normal conditions.

Pressure above atmospheric is the norm for the cooling systems of 99.9% of modern engines. Its main and only task is to ensure that the antifreeze does not boil if the engine operating temperature is higher than the coolant boiling point at atmospheric pressure. Boiling generates an abundance of vapor, which prevents the pump blades from pumping the fluid efficiently, and the vapor bubbles, standing as a barrier between the fluid and the surface it washes over, dramatically worsen the heat dissipation. These two processes are closely related, mutually supporting each other and progressing rapidly. The result is rapid engine overheating, which does not stop immediately, even after shutting down, and for this reason is rarely without consequences.

As a matter of fact, the operating temperature of internal combustion engines has been increasing throughout their evolution, and this process continues even now. Conventionally, the “stages of growth” can be designated as follows:

“80-85 °C” (long-gone temperature characteristics peculiar to mid-20th century engines)
“95-105 °C” (characteristics that have been the norm for the last few decades and are still relevant for relatively simple engines)
“120-130 ° C” (temperatures at which the most advanced modern engines operate, which are at the peak of fuel efficiency and environmental standards)

These figures are approximate, given simply to understand what values we are talking about. There are exceptions, where it is “the other way round”, but they are rare and only confirm the rule.

Now we are interested in an early period of development of automobile industry – those 80-85 °С. As we see, this temperature is lower than the boiling point of water at atmospheric pressure, and moreover – lower than the boiling point of antifreeze under the same conditions. So, these engines did not need pressure in the cooling system? Exactly right – it was not there!

The old clay days – the era of engines with an open cooling system! Plugs in the radiators of cars of that period, of course, were, but they did not provide tightness, and served only to prevent splashing water when the car was shaken on the potholes. All the rest did not differ essentially from modern engines: the pump also rotated and drove the liquid by its impeller in a circle through the engine jacket and radiator, and the water expanding with heating was displaced into the compensating volume, which was the upper tank of the not filled up to the end radiator.

Despite decent overall power, these engines operated in the mild conditions of low rpm and little power coming off each liter of cubic footage. The blocks and heads were cast-iron, massive, with large amounts of oil in the crankcases, with large radiators and constantly rotating cooling impellers mounted directly on the pump pulley or crankshaft, without any temperature sensors or viscocouplers. Therefore, even at the maximum load the temperature of water in the cooling system without pressure did not approach a hundred degrees, and the serviceable engine did not boil. And even at initial stages of malfunctions (not fully opened thermostat, low liquid level, partially clogged radiator, etc.) the problem did not arise at once – the engine had a large reserve of “meat” and it was not so easy to bring it to the point of steam outpouring.

However, the flipside of the medal and the inherent satellites of the characteristics of such engines were fuel voraciousness and low environmental friendliness. These two points subsequently required reforms in engine engineering, and engines became smaller, ate less, produced more per liter, and increased their operating temperature. Open-type cooling systems disappeared, giving way to sealed systems – temperatures rose and antifreeze pressure took over the main role in protecting it from boiling.

Accordingly, under the hood appeared such detail as a cap of the expansion tank with a calibrated valve, which had a big responsibility – to keep the pressure at a strictly defined limit. If it is exceeded, in case of malfunction in the cooling system, it opens and lets out steam and antifreeze outside in order not to burst hoses and radiators.

However, despite the fact that in the cooling system after the introduction of pressure nothing has changed fundamentally, except for the shift of the temperature to a higher zone, many motorists have mistakenly considered pressure as a necessary condition for a variety of processes. On auto forums one can often meet statements that if there is no pressure in the system due to a failure or absence of the expansion tank plug, the pump cannot work properly, the thermostat does not open, the engine cannot reach operating temperature (!) and other similar fantasies.

Yes, raising the operating temperature of engines has become one of the inevitable measures to meet modern requirements for environmental friendliness and economy. But the pressurized cooling system also has two very significant disadvantages…

The first is an increased risk of antifreeze leakage. While a car is new, there are no problems, of course, but with age, weak points in cooling system begin to appear. Spring clamps become weaker, rubber connectors lose their elasticity and get covered with cracks. Plastic elements (transition connectors, connectors, bodies of thermostats and so on) become brittle and fragile. And where it’s thin, it tears. Coolant pressure starts pushing it out at the first opportunity. The “aged” cooling system is unpredictable in its surprises, which price is rather high – if the engine will not “burst” from overheating, you will have at least to pay for a car tow, because you will not go far without antifreeze even after cooling down…

The second disadvantage is partly a variation of the first. Modern motors have practically no “meat” reserve, wherever you poke, not excluding the heat capacity of the cooling system. The raised pressure accelerates the antifreeze on asphalt at the slightest leakage, and where the old engine (even with the cooling system working under pressure, let alone the open one!) would hold for some time, losing the liquid gradually, the modern engine loses it at a dangerous rate. Or rather, the rate is the same, but the result is different. The cooling system of the modern B -class car contains twice less antifreeze, than even classic “Zhigul”, and if each of cars loses a liter for half an hour, it will be 10% loss for the first car, and already 20% for the second one… The “survivability” of the car decreases proportionally, and the risk of overheating consequences increases proportionally.

Can you fight it? It is possible, but difficult… “By the way, veteran Gazellists can recall quite a long history of the late 90s when the quality of assembling was so high that even skillful drivers couldn’t stop the antifreeze leak for several months. Only by unscrewing the cork of the expansion tank and switching the cooling system to the “without pressure” mode it was possible to get rid of endless blue puddles on the asphalt in the morning… But such trick could be used only with ancient ZMZ engines, whose forefathers were working without water pressure.

Unfortunately, it is impossible to transfer hermetic system of cooling to the open variant on modern automobiles, in order to avoid overheating. Therefore, having got the car with age of 7-10 years and/or with large run, it is highly desirable to conduct total replacement of all cooling system – at least, all rubber hoses, clamps, most plastic details (transition hose joints between hoses, etc.), thermostat and cork of expansion tank. The only thing is that even with use of decent non-original such procedure turns out to be rather expensive, and rare buyers of used cars dare for such preventive measures without evident breakages…