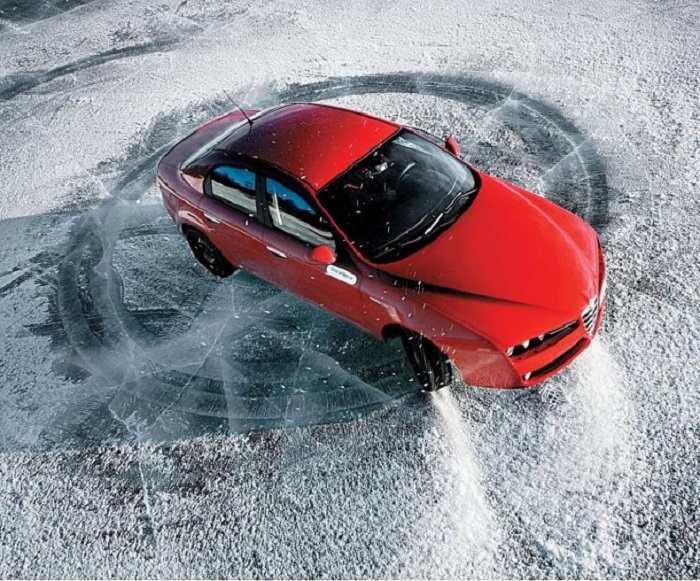 With the onset of winter there is a sharp increase in the number of accidents due to vehicles skidding on icy roads. Many of them end tragically. Fatal cases would be much less if all drivers had the necessary skills and were not lost in a difficult situation. Ice on our roads – the usual phenomenon, so it is vital to learn how to get out of the skid.

Skidding a car with rear-wheel drive

Rear-wheel drive cars have driving wheels in the back and steering wheels in the front. When driving on an ice-covered area, the main task is to avoid skidding of the wheels. Abrupt braking, strong jerk of a steering wheel or too active manipulation with pedals – any of these factors will cause violation of traction with a surface and sliding. Accordingly, the car will skid. Therefore it is necessary to do everything as smoothly as possible: to control the car, turn, brake. And, of course, keep a more distant distance from other cars.

About the safe passage of the turn should be worried in advance. To do this in advance to slow down to a safe speed, choose a gear and, taking your time, keeping an even pace, pass the turn.

If in spite of efforts, the wheels came off in a slip, it is important not to panic. And in no case do not press the brakes. It will only aggravate the situation. It is necessary smoothly, but very quickly to turn the steering wheel in the direction of skidding and accurately remove the gas. Then the engine can brake the rear axle. Then you should turn a steering wheel in the opposite direction and stabilize position of the car with gas. If you don’t do this, the car will skid to the other side. And if the road is like glass, it will start spinning around.

Skidding a car with front-wheel drive

Such cars pull forward and turn the front wheels, so the main condition is not to drop the gas. Act like in the first case – turn the steering wheel to the skid and increase gas a little. It will help you to pull the car forward. In no case do not touch the brake, otherwise the car will be turned around! Do not be frightened if the back started to walk from side to side. The leading wheels will still pull the car.

If you added too much gas, then when leaving the turn, the car may be carried to the outside of the road. In this case, you need to take your foot off the gas pedal. This will help load the front end of the car more. As a result, downforce will increase, there will be normal traction. The position of the car will stabilize

These cars are considered to be the most stable on ice, because they hold the grip longer than other types of cars. However, they can also go into a skid. And it happens very unexpectedly. Getting out of it is the most difficult, because the gas pedal acts on all wheels at once. Each of them has its share of torque.

Therefore, there is no single algorithm for action. It is necessary to take into account the peculiarities of the design of the car, since they affect the steering. For example, a car with a detachable front axle can be stabilized by the method typical for rear-wheel drive cars, and a model with a viscocoupler – by the methods for front-wheel drive cars.

In a word, there is no uniform rule in such cases, and each driver should work out an individual strategy. The analysis of car characteristics will help to determine it: type of drive, its control mode, power transmission mechanism, presence/absence of stabilizing system.

If to speak generally, experts advise to follow the rules: to turn a wheel to the side of skid, to hold gas. If you release a pedal, you will fly out from your lane.

How not to get into a skid

Watchfulness and driving skills can help you avoid skidding on a winter road. Being behind the wheel, it is important not only to watch the traffic, but also to analyze the situation. You need to learn to anticipate dangerous situations. For example, during a night drive on the icy section will indicate the unexpectedly foggy windows from the sudden drop in air temperature.

When driving in the city you should remember that most often there are places with ice near public transport stops, as well as on bridges and crossings. On country highways, dangerous places are usually in the lowlands and opposite the gaps in the forest belt.

As for actions during a skid, you must remember the basic rule that works for cars with any type of drive: never press on the brakes. Unfortunately, many drivers in a panic forget about it. Or they act too sharply, thus worsening the situation even more.

For example, in normal conditions at a car speed of 50 km / h braking distance will be about 15 meters. On the icy road, it will increase by 4 times, and together with the stopping distance will reach 30 m. The higher the speed, the greater the distance the car will roll. Therefore, experienced drivers are advised to reduce the speed as much as possible before the turn and pass it very carefully.